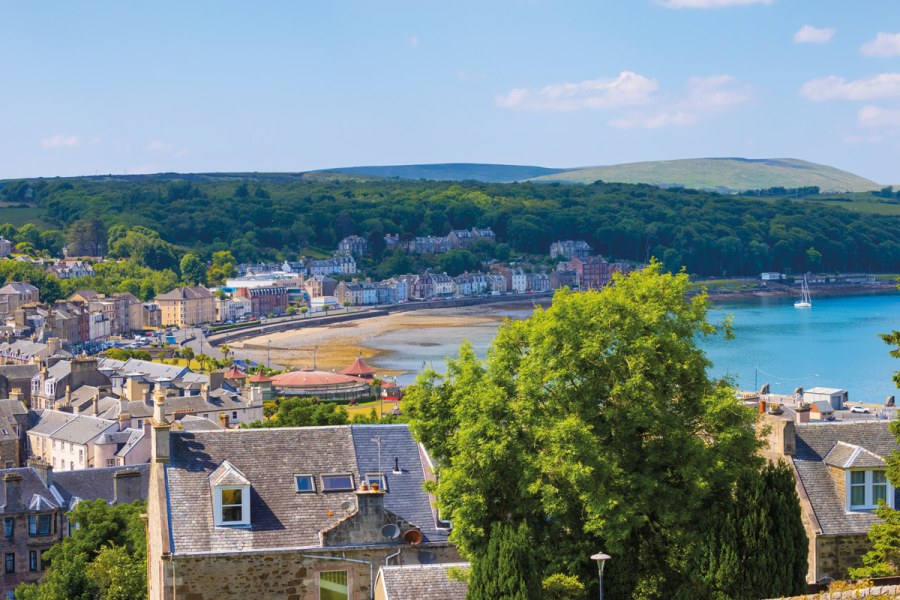 Post-pandemic lifestyle changes are driving the market for coastal homes in all four corners of the UK, writes coast property specialist Lesley Gillilan, as she searches out ideal seaside spots if you’re thinking of relocating

The towns and villages on Scotland’s beautiful coastline – its islands and highlands – have been enjoying the same buoyant market as England’s West Country. Buyers are coming from all over the UK, says Phiddy Robertson of leading Scottish agent Galbraith. ‘They often come to Scotland on holiday and fall in love with the lifestyle. They want to be by the water and no longer have to give up their jobs to make it happen.’ The hottest markets, she says, are on or off the west coast: Ayrshire, Argyll, as far as north as Ullapool or across to the Isles of Arran, Skye or Harris. But she recommends heading south, or checking out the north-east coast. ‘It’s less well known, with a drier climate and some wonderful beaches – places which are mostly enjoyed by people in the know.’

First things first, it’s pronounced ker-coo-bree; second, it’s a small fishing port at the mouth of the River Dee on Scotland’s south-west coast – one of a collection of attractive towns and villages on Dumfries & Galloway’s 150-mile coastline which, according to Galbraith estate agent David Corrie, ‘offers many of the same landscapes and views as Cornwall but without the crowds, and at a fraction of the price.’ Kirkcudbright stands out for its pastel-coloured houses, quaint alleyways, pretty harbour and independent shops and galleries. Like St Ives, it has been home to painters since the 19th century, hence the name, ‘the Artists’ Town’. It’s not the easiest place to get to (the nearest station is at Dumfries, 40 minutes away) but the lovely beaches at Carrick, Rockcliffe, Kippford and Dhoon Bay are all close by.
Average house price: £211,721.
For sale: On Carrick Bay, nine miles from Kirkcudbright, a three-bedroom shoreline cottage comes with a lettable annexe and wonderful sea views. £680,000 through Galbraith (01566 505346, galbraithgroup.com).

The Royal Burgh of Dornoch forms a gateway to a string of seaside villages which run north up the Sutherland coast – all whisky, wildlife, castles, golf courses and salmon fishing, set against a backdrop of craggy mountains (Cairngorms National Park is the UK’s largest). On the Firth of Dornoch, the town itself is largely Victorian, with leafy streets of stone-built houses and a magnificent beach. More dreamy, white-sand beaches (Golspie, Brora and Portgower) lie between here and pretty harbour village of Helmsdale. It’s more accessible than it looks, too: there is a station at Tain (9 miles away) and Inverness airport is an hour’s drive.
Average house price: £238,223.
For sale: A five-bed, Victorian villa with lovely gardens in the heart of Dornoch, is for sale for £385,000, Purple Bricks (0208 0127268, purplebricks.co.uk).

In the Firth of Clyde, just off the west coast of Argyll, Bute is one of the most accessible of the Scottish islands (weather permitting, it’s just under two hours from Glasgow via the car ferry from Wemyss Bay to Rothesay); it’s also one of the cheapest places to buy property in the UK. Outside of Rothesay, the only town, Bute is green, hilly, sparsely populated, fringed with lovely beaches (Scalpsie or Ettrick Bay) and rich in wildlife (seals, hares and wild goats) making it a great get-away-from-it-all sort of place. According to island website ButeGateway, it’s also peaceful, safe and ‘the perfect environment to raise children’ (the town has good state-run schools). The prices? A five-bedroom period farmhouse was recently offered with a guide price of £165,000; flats have been known to sell for under £10,000.
Average house price: £119,007.
For sale: A seven-bedroom Georgian mansion in Rothesay, converted into five spacious apartments, is for sale at £485,000 through McEwan Fraser (0131 5249797, mcewanfraserlegal.co.uk).

If you’re ready to move to the coast, browse our selection of the latest seaside homes for sale, check out our guides to coastal locations or pick up the latest copy of coast magazine for more coastal living inspiration