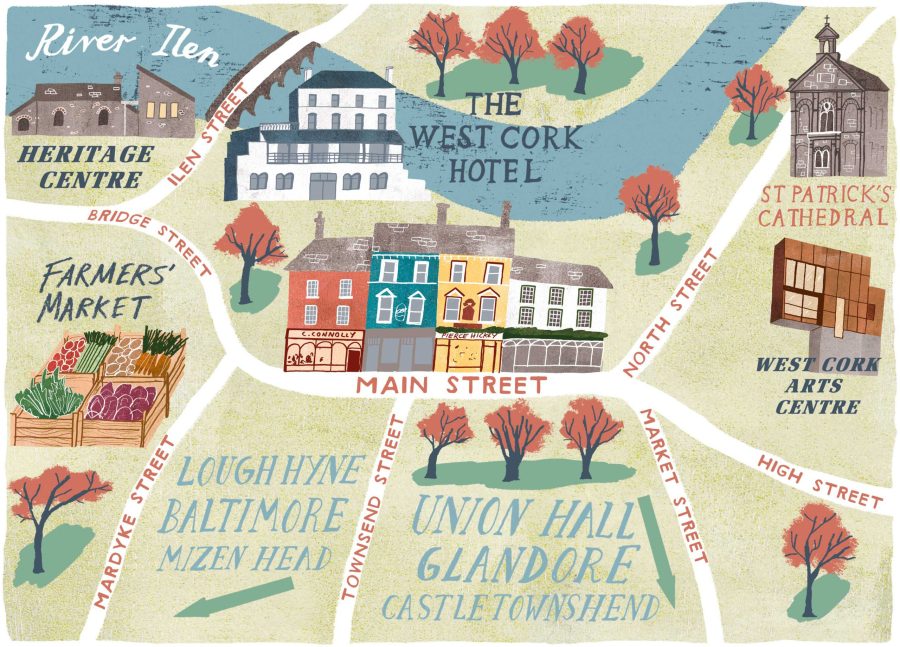 Standing proud on the banks of the River Ilen, this vibrant little town is a gateway to West Cork’s charming fishing villages and wild bays. Words Lesley Gillilan

Skibbereen, Ireland’s most southerly town, is within  a whisker of the ravishing West Cork coast. ‘Skibb’, as  the locals call it, is small and friendly, with a tiny cathedral, an old-fashioned town hall with a clock tower, and brightly painted shops on a busy high street. Other attractions include a farmers’ market on Saturdays and a Heritage Centre dedicated to Ireland’s Great Famine. According to Elaine Hill, general manager at Skibbereen’s West Cork Hotel, ‘It’s a vibrant little town,’ though she admits that it’s the landscapes and the location which brought her here.

Within just a few miles, she  has access to the West Cork coast: a complexity of inlets and bays, rugged cliffs and narrow peninsulas which reach like fingers into the North Atlantic where the foamy waters are scattered with tiny islands. Further west, a trail of colourful harbour villages lead to the beaches of dramatic Mizen Head – the Irish equivalent of Land’s End. Much of the coastline is wild and undeveloped. ‘I’m very lucky to live here,’ says Elaine.

She grew up in Bedfordshire, before her family ‘spontaneously’ moved to West Cork in 1987 (her mother is originally from Waterford in southeast Ireland). College and her career took her elsewhere in Ireland and Europe, but after several years away, she decided to return to rural West Cork. ‘It’s always been home to me,’ she says. ‘I was very happy to find a good job that made it possible to return.’

She loves the charm and variety of the area’s quaint fishing villages – Baltimore, Castletownshend, Glandore, Schull – the quiet beaches in winter, the buzz of visitors in summer, eating out at seaside restaurants and shopping for ‘fantastic local produce’.

‘The quality of the food is  one of the area’s strengths,’ says Elaine. ‘But for me, it’s the people who make West Cork. We get visitors from all over the world – they come here because it’s beautiful, but they stay because the people are warm and very welcoming.’

WHERE TO BUY
Handy for shops, schools and local life, Skibbereen makes  a good base (and is affordable too, with three-bedroom houses from around €200,000), but incoming buyers tend to search the coast and countryside for quirky, out-on-a-limb properties – smallholdings, island boltholes, seaside cottages and derelict farmhouses (you can pick up the latter for around €125,000). For stone fishermen’s cottages and harbour-view houses, head for Baltimore or Union Hall, both within an easy drive of Skibb. For grander, period houses in tranquil seaside villages, look at Glandore or Castletownshend. On the Mizen Peninsula, check out Ballydehob or arty Schull.

TIME OUT
Nature is the thing here: sailing, kayaking or whale-watching off Roaring Water  Bay or hanging  out on the surfy  white beaches  of Mizen Head  (beautiful Barley cove  is 45 minutes from Skibbereen). Explore the Sky Gardens on  the Liss Ard Estate, walk around Lough Hyne or follow the coast path on the West Cork stretch of Ireland’s Wild Atlantic Way. Annual events include the Skibbereen Arts Festival in July and the taste of West Cork food festival in September. This is the birthplace of Ireland’s Slow Food movement and the food is sublime: prawns, mussels and scallops from Bantry Bay, or hake and monkfish fished off Union Hall. Mary Ann’s Bar and Restaurant in Castletownshend or An Chistin Beag in Skibbereen are among the many excellent restaurants dedicated to fresh local produce. For more information, visit ireland.com

JOBS AND COMMUTING
The economic hub of rural  West Cork, Skibbereen is a designated District Employment Area, though jobs are limited (think retailing, education, tourism and artisan food production). There are no railway connections in this corner of Ireland, and no large towns – the nearest is the city of Cork, one hour and 15 minutes by car (add another two and a half hours to reach Dublin). Aer Lingus flies to Cork from a number of UK airports, including London, Glasgow, Newcastle, Manchester, Birmingham and Bristol.

REALITY CHECK
As the region’s urban hub, Skibbereen has all the basics – post office, supermarkets, hospitals – but beside the odd pub and the summer festival season, the town doesn’t  offer much in the way of night life (the nearest cinema is at Bantry, 27 miles away). For those buying houses in the town centre, traffic congestion can be an issue and, close to the river, there is a danger of flooding.

COMING UP
West Cork, with its magnificent coastline and developing tourism industry, is a good place to look. And a boost for Skibbereen  is the West Cork Arts Centre – a surprisingly tall landmark building – which opened in January 2015.

PAY A VISIT
West Cork Hotel westcorkhotel.com
Skibbereen’s friendly, traditional town-centre hotel offers comfortable rooms (some have giant beds and balcony views of the River Ilen) and a lively restaurant and bar. Downstairs, warm fires are lit, the bar and lobby is buzzing with life, the food is excellent (breakfast served until midday) – and it’s probably the only hotel in Ireland (or anywhere) with a terrace on a disused railway bridge. B&B from €79.

What Elaine likes about… SKIBBEREEN
A keen walker, Elaine regularly walks her dog up Knockomagh Hill above Lough Hyne, Europe’s only inland saltwater lake, just a few minutes from Skibbereen. ‘It’s so calm and peaceful and the views are breathtaking.’

Bushe’s Bar on Baltimore’s seafront square is a favourite hang-out ‘In the summer, you can sit outside and watch the ferries and sailing boats in the harbour. The bar is very friendly and they do good, cheap lunches, like fresh crab sandwiches.’

Drive down to Mizen Head, Ireland’s most southwesterly point, for the visitor centre with its signal station and 99 steps down to Arched Bridge. Then a walk or a swim on the beach at Barleycove and lunch in Goleen or Crookhaven.  ‘A perfect day out with friends.’