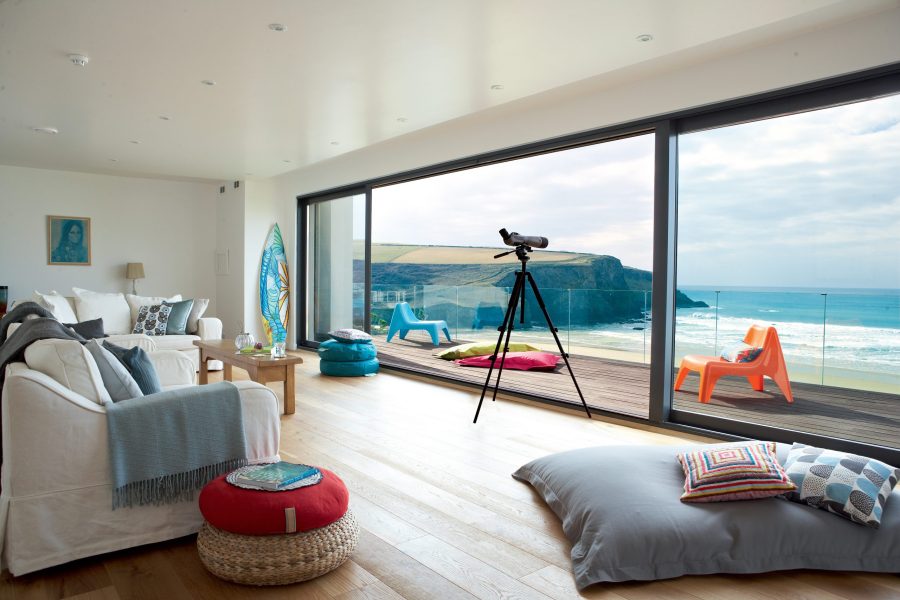 It was always Dan Hatfield’s dream to design and build his own eco-house, but what he didn’t realise was that by doing so, his life would take a whole new direction. Words: Alex Fisher. Photographs: Paul Ryan-Goff

‘If it wasn’t for this house, Katie and I might never have met,’ says Dan Hatfield, smiling at his girlfriend, who is now eight months pregnant. ‘I was a year into the build and the house was just a shell surrounded by scaffolding. Katie walked past on her lunchbreak and I invited her to check out the view, and that was it, I was smitten.’

Katie Weaving was working at The Scarlet hotel, just around the corner, at the time. As House Manager she was planning the launch of this now hugely successful hotel in Mawgan Porth. ‘After that first meeting with Dan, I made a habit of walking this way on my lunchbreak, and it just went from there.’

Dan originally worked in the City, but moved down to Cornwall after taking voluntary redundancy. ‘I started coming down here as a break from my busy life in London, but it became harder and harder to go back. I really fell in love with Cornwall, and realised this was where I wanted to put down my roots. My dad worked abroad, so I’d moved around the world a lot as a child, and it suddenly felt very important to create somewhere that felt like home.’ In order to do this, Dan decided that he wanted to both design and build his own house. ‘It had always been a dream of mine, and after my voluntary redundancy, I saw an opportunity to make that dream a reality.’

Dan started looking for a building plot, and soon came across a tumble-down bungalow called Tanzarra in the small Cornish village of Mawgan Porth. ‘As soon as I saw this plot,’ Dan explains, ‘I snapped it up. There was only a rotten bungalow here, but the views were incredible.’ Despite his lack of experience, Dan was committed to designing the house himself. ‘I guess I threw myself in at the deep end,’ he says, laughing. ‘I’d done a lot of DIY in the past, and I was up for a challenge.’ He joined forces with friend and neighbour Billy Fullerton (of Fullerton Timber Frames), who built the timber frame for the house in his workshop, before carrying it down to the plot in a local farmer’s tractor trailer. ‘I didn’t feel I needed an architect because the house just designed itself,’ continues Dan. ‘It was all about maximising the views without compromising the views of my neighbours. To this end, I went for a clean, contemporary design, with a flat roof, which gave me the two storeys I wanted without spoiling anyone else’s vista.’ The result is a stunning, five-bedroom home that has been nominated for the LABC Building Excellence Awards.

‘It was really important to me,’ Dan adds, ‘that we did everything in the most environmentally conscious way possible, which is why I designed my own grass roof. Most grass roofs are sedum, which I didn’t think would withstand our extreme weather here by the sea. I wanted to use plants from our local area, which would thrive in the high winds and salty air. So, with the help of my mum, Lynn, we propagated 5,000 sea thrift and Festuca rubra, and made the sub-soil on the roof much deeper than usual. This provides great insulation for the house, whilst also reinstating nature. I used local building materials where possible, such as Cornish stone, and fitted eight square metres of solar thermal panels, which provide most of the energy to heat the water and the under-floor central heating.’

The timber-framed house also has a cavity block skin on the outside, so that it can withstand the strong winds that come off the Atlantic. As the house is completely airtight, there is
a ventilation system which recovers heat whilst bringing in filtered fresh air. Dan also installed ducking pipes, with a view to harvesting rainwater, and the result is a property that achieved a B-rating in energy efficiency, making it one of the most eco-friendly new homes in Cornwall.

Once the house was built, Katie, who had moved to Newquay in the hope of recreating the coastal lifestyle he’d enjoyed whilst living in Australia, was responsible for the colourful and eclectic interior. ‘Without my input, I think the house might have ended up all black gloss,’ she laughs. ‘But as it turned out, the items Dan chose make a great backdrop for my colourful textiles.’

‘The interior is a blend of both of our styles,’ she continues. ‘I like clashing, individual pieces and hunted for vintage items on the internet and in my favourite shops, such as Nanadobbie in Lostwithiel. I would often come home with mismatching pieces that Dan would initially baulk at, but once they were in place, he would always see why I chose them.

‘I like to mix modern with vintage, old with new: the main thing is that everything has character. Some items are from my family, others have been made by friends. The surf rack, mirror and side tables were made by Henry Tidd, of Soap Designs, a local craftsman and friend, who specialises in making furniture from sustainable sourced birch plywood.’

ECO-HOMES ON THE HORIZON

As a result of the build, Dan now has a new career. ‘I didn’t know what I was going to do when I left the City,’ he says. ‘But I really enjoyed this project, and I got on so well with Billy, that we formed our own building company, Lionpark Construction. We’re now hoping to have the opportunity to build something like Tanzarra for someone else.’

Katie, on the other hand, is taking some time out of her busy working life which combines hospitality, marketing and her Nordic Walking business, to prepare for the birth of her first child. The couple are planning on having their baby at home, in Tanzarra, where they first met.

Tanzarra is available as a holiday let during July and August. For more information contact Cornish Gems on 0844 800 2813 or visit cornishgems.com.

• Plan everything from the outset: Don’t start until you know exactly what you are doing. Changes are timely and costly.

• Find the right builder/team for you: If you are hands on, then get people who can work with you, complementing your skill base.

• Make firm decisions: If you’re the project manager, you will be deciding things daily. Have a clear picture of the whole project and know the implications for each stage of the build.

• Take time to consider the environment: We have a timber frame, energy efficient house, with lots of insulation, meaning we get a fresh, clean and cost-effective living temperature all year round.

• Spend on the important things in the right places: Things like granite worktops, deep relaxing baths, oversized showers and slate fireplaces are worth the cost.