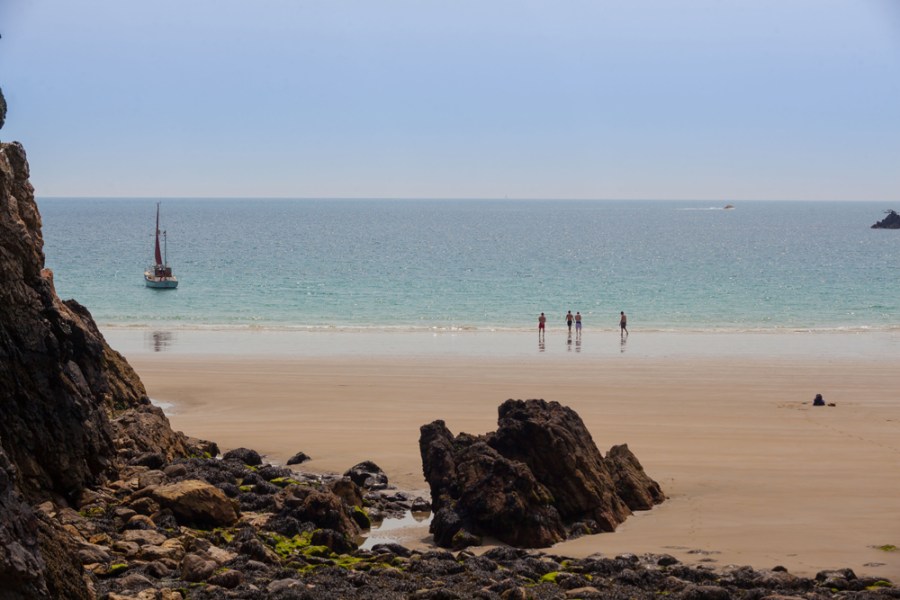 With over 7,000 miles of British Isles coastline to explore, the journey to and from your destination is all part of the holiday experience, whether by ferry, train, plane or car, says Caroline Wheater

FERRY TRAVEL
Sailing to your destination is exciting and as the British Isles, is lapped by the ocean, we have plenty of opportunity to take a sea passage. For those longer journeys to Guernsey, say, or Ireland, or the Scottish Isles, it’s an exhilarating feeling as you travel to a port, get in line, then drive or walk on to a ferry, knowing that the next bit is the Captain’s responsibility entirely. Whether you choose to fuel up in the restaurant on fish and chips, sightsee on deck, or simply nod off in one of those super comfy recliners, your holiday is underway.

Ireland & Northern Ireland
The emerald isle is well served by ferries, with major ports at Rosslare and Dublin to the south, and Belfast to the north. In the UK, vessels leave from the ports of Pembroke and Fishguard in Pembrokeshire, Holyhead in north Wales, and Liverpool, taking anything between two hours to three and a quarter hours. British and Irish citizens don’t need to carry a passport but are advised to take a form of identity such as a driving licence or utility bill or birth certificate in the case of a child.

Isle of Wight
The Island, as locals call it, is the perfect getaway from London – with some of the highest sunshine hours in the kingdom and fab beaches. Via Red Funnel’s high-speed catamaran service from Southampton, it’s a mere 23 minutes away from the mainland. Even on a traditional ferry, you can be in Fishbourne from Portsmouth in 45 minutes, or East Cowes from Southampton in an hour. 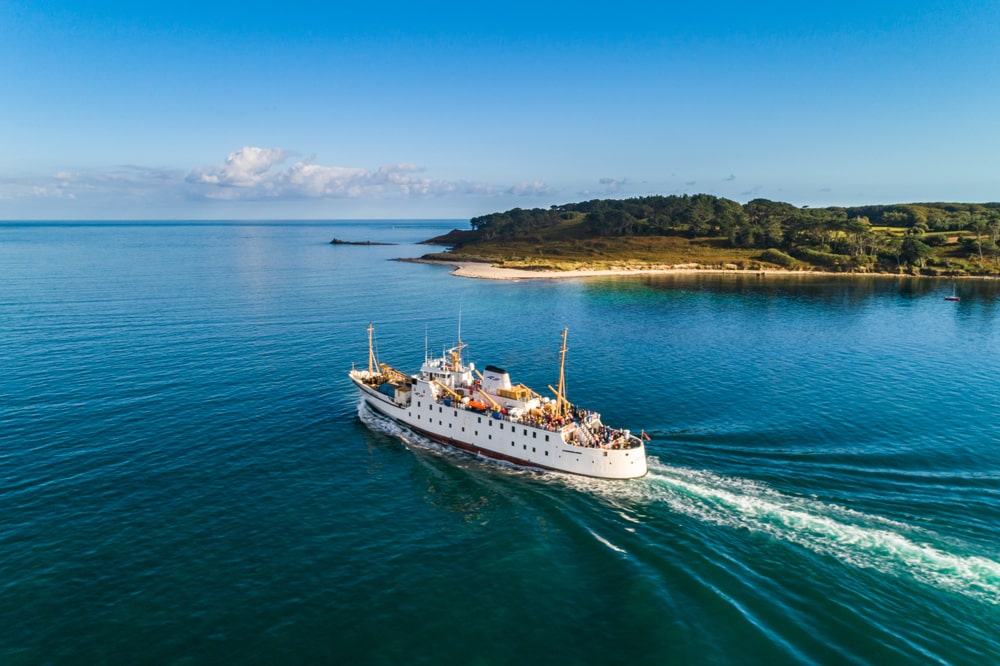 Isles of Scilly
Take in the rugged Cornish coastline and the white sands of the Scilly Isles when you sail from Penzance to St Mary’s on the Scillonian III, which takes two hours 45 minutes. Once at St Mary’s harbour, local boatmen take visitors to the ‘off islands’ of Tresco, St Martin’s, St Agnes and Bryher.

The Scottish Isles
Once bitten by the west coast’s Hebrides islands, forever smitten, with the journeys from Oban to wildflower haven, Barra (four hours, 50 mins), and Oban to Neolithic hotspot, South Uist (five hours, 10 mins), considered to be two of the most special. At the furthest reaches of our coast is Orkney, then Shetland, which is a nine-hour ferry journey. 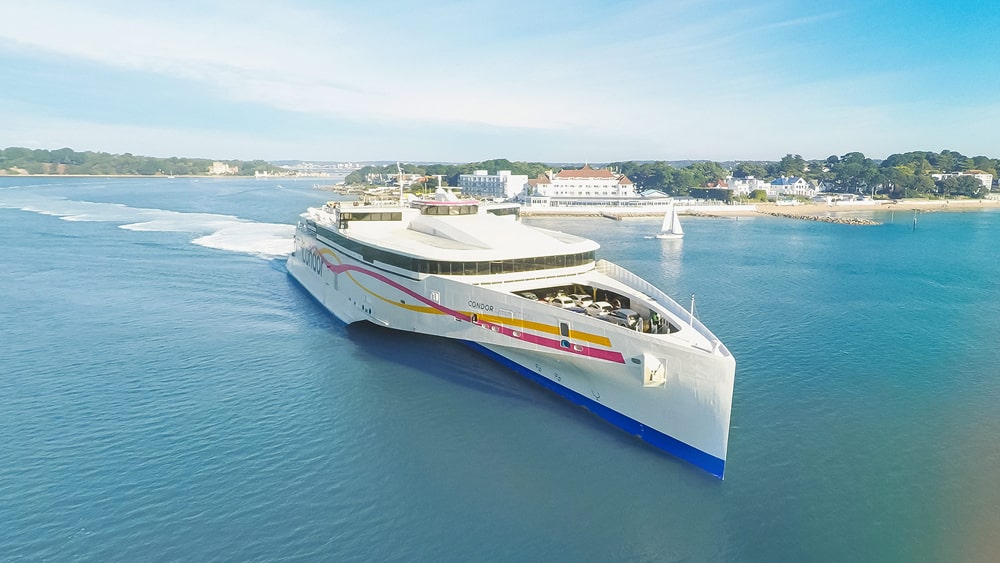 The Channel Islands
For a taste of the good life, where crime is almost non-existent and beaches are ten a penny, head to the Channel islands. Ferries run up to twice a day in high season to Guernsey (duration three hours), and to Jersey (four and a half hours). From Guernsey you can access delightful and car-free mini islands, Herm and Sark, and a little further away, Alderney.

Isle of Man
Bang in the middle of the Irish sea, the Isle of Man offers cliff walks, sea kayaking, coasteering and a lively Food and Drink Festival in September. The crossing from Liverpool takes two and a half hours.

RAIL TRAVEL
The old slogan ‘let the train take the strain’ has lost none of its wisdom, and if you want a switch off, when you can rest or work, the train is hard to beat. Of course, some routes are more picturesque than others, and we’ve listed a few of our favourites here. 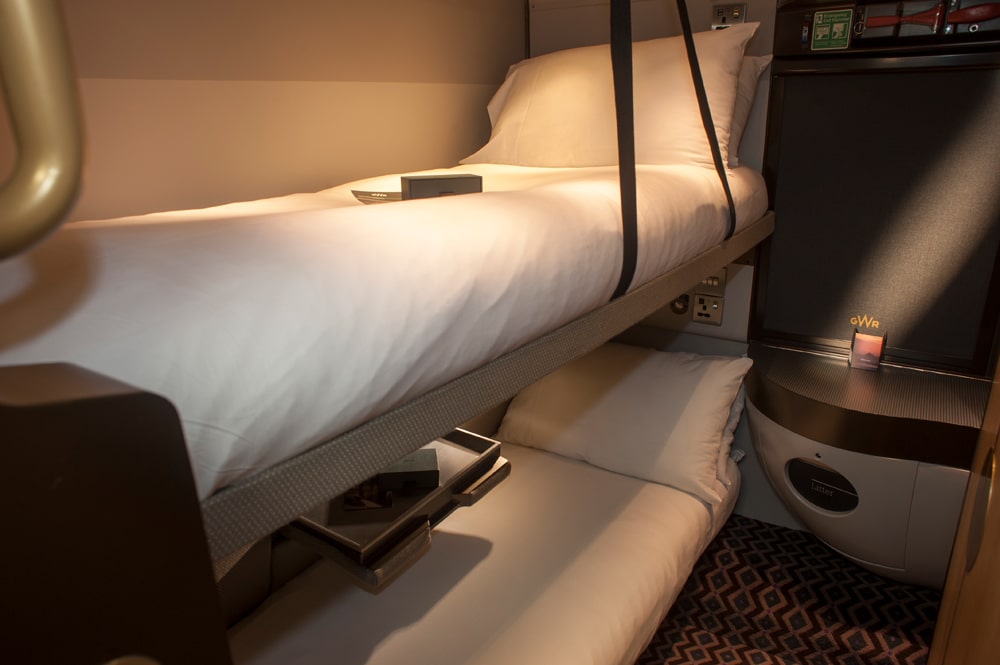 One of the most iconic coastal rail journeys goes from London Paddington to Penzance in Cornwall and is operated by Great Western Railways (GWR) – it’s a route that first reached south Devon an incredible 170 years ago, in 1849. You can go during the day on an Intercity Express (travel direct from Birmingham too), but taking the Night Riviera sleeper train adds a frisson of excitement and doesn’t waste any valuable sunlight hours as you leave around midnight and arrive just before 8am. Newly refurbished, the sleeper service has modern airline-style seats in the seated carriages, with snacks and drinks available throughout the journey. Or you can blow the budget and book into a private cabin that comes with exclusive use of the onboard lounge and complimentary continental breakfast; you’ll also have access to the GWR lounges at Paddington, Penzance and Truro (with showers available). The stretch from the Exe Estuary to Teignmouth runs right next to the sea and is surely one of the world’s great train journeys (gwr.com)

2. Head north fast
Another iconic route is operated by London North Eastern Railway (LNER), from King’s Cross to Edinburgh, with the fastest train taking just four hours and 14 minutes. While you might sleep part of the way up, you’ll want to be on full alert from Newcastle onwards as the train passes the Northumberland coast. You’ll see Alnmouth, catch views of Holy Island and Lindisfarne, trundle through quaint Berwick upon Tweed, then Dunbar with views out to Bass Rock – home to 150,000 gannets during the summer months. Some LNER trains on this route go all the way to Aberdeen, from where you can get a ferry to Orkney and the Shetlands (lner.co.uk).

3. Revel in the Scottish Highlands
The rail journey from Inverness to Thurso takes three hours 45 minutes and is operated by the Far North Line. The track traverses the Beauly Firth, Cromarty Firth and Dornoch Firth before running parallel to the North Sea, and steam trains occasionally run on the line too. If they can tear their gaze from the horizon, passengers can look out for landmarks including Foulis Castle, coastal distilleries and Skibo Castle (scotrail.co.uk).

4. See Welsh bays in abundance
Step on the train at Machynlleth in Powys and settle in for a two and a half hour glide over to Pwllheli in Gwynedd. Known as the Cambrian Line, operated by Arriva Trains, this route is sandwiched between the towering mountains of Snowdonia and the expansive water of Cardigan Bay. Expect sandy beaches galore, as the train passes through the seaside resorts of Aberdovey, Fairbourne (which is edged with wartime fortifications), and Barmouth, to name a few. Towards the end of the line, Criccieth Castle is a sight not to be missed (arrivatrainswales.co.uk).

5. Whizz by the Cumbrian coast
Carlisle in Cumbria to Barrow-in-Furness, Cumbria (Northern Rail). Running alongside the Lake District National Park, the Cumbrian Coast Line, operated by Northern Rail, is never far from a walker’s heaven. Starting in Carlisle and finishing in Barrow-in-Furness, stop-off points along the three hour journey include the seaside towns of St Bees, Silecroft and Ravenglass. The sea laps at the trackside for most of the journey. There are also occasional steam specials on this line (northernrail.org).

PLANE TRAVEL
AIr routes significantly cut journey time and are relatively hassle-free. If you’re a British citizen flying from one part of the UK to another, strictly speaking you don’t need a passport, but you do need a form of photographic identification, such as a passport or a driving licence, so a passport is often the easiest thing to take with you (note that individual airlines have their own requirements, so check before you travel). 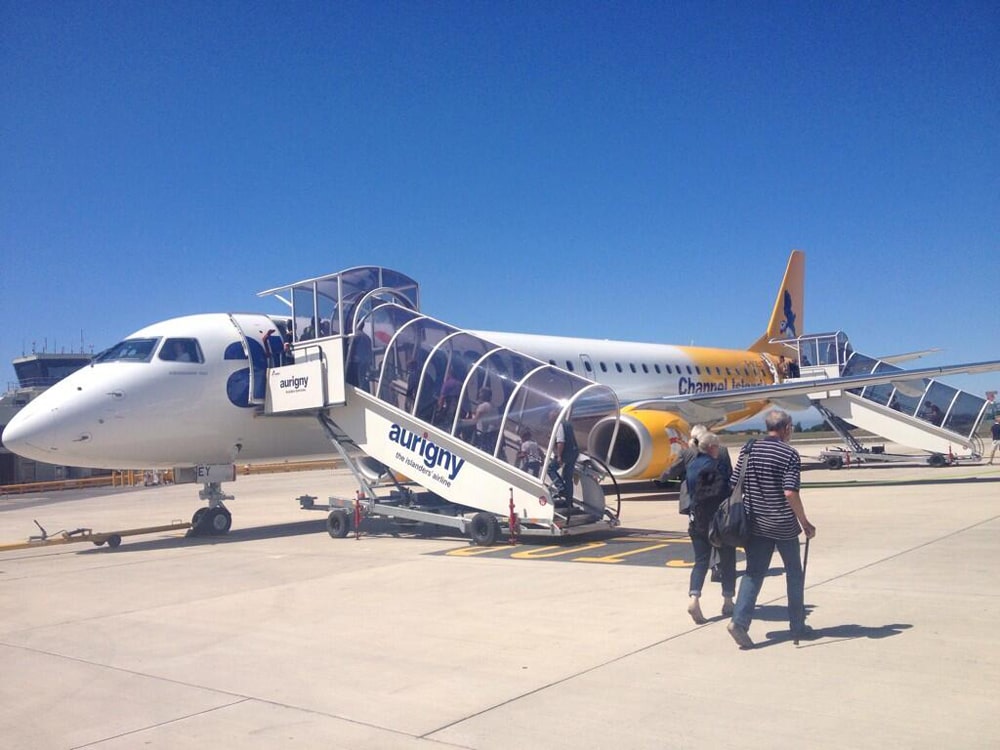 As with any flight, you will need to go through security before departures and the standard rules apply. No more than 100ml of any liquid is allowed on a flight and all containers must fit into a clear plastic bag that’s 20cm x 20cm in size. And do bear in mind that on small planes luggage allowances can be limited, so pack as lightly as possible. What you won’t have is long queues of passengers arriving from other European destinations – once you’re at your journey’s end, disembarkation should be swift.

Fly to the Isles of Scilly
The fixed wing Skybus service goes from Exeter, Newquay or Land’s End to St Mary’s – with flight times between 20 minutes and an hour. From summer 2020, you’ll be able to helicopter from Penzance to St Mary’s or Tresco in just 15 minutes (islesofscilly-travel.com).

Fly to Cornwall
Flights to Newquay operated by Flybe and British Airways (ba.com) from Gatwick and Heathrow take one hour and 10 minutes. Flybe also operate another 12 routes to Newquay, including from Manchester, Leeds, Glasgow and Belfast (flybe.com).

Fly to the Channel Islands
Guernsey and Jersey are served by Aurigny, Guernsey’s own airline, Flybe, Blue Islands, Loganair, BA, Jet2 and Easyjet from many regional airports. Flights take just under an hour (visitguernsey.com and visitjersey.com). 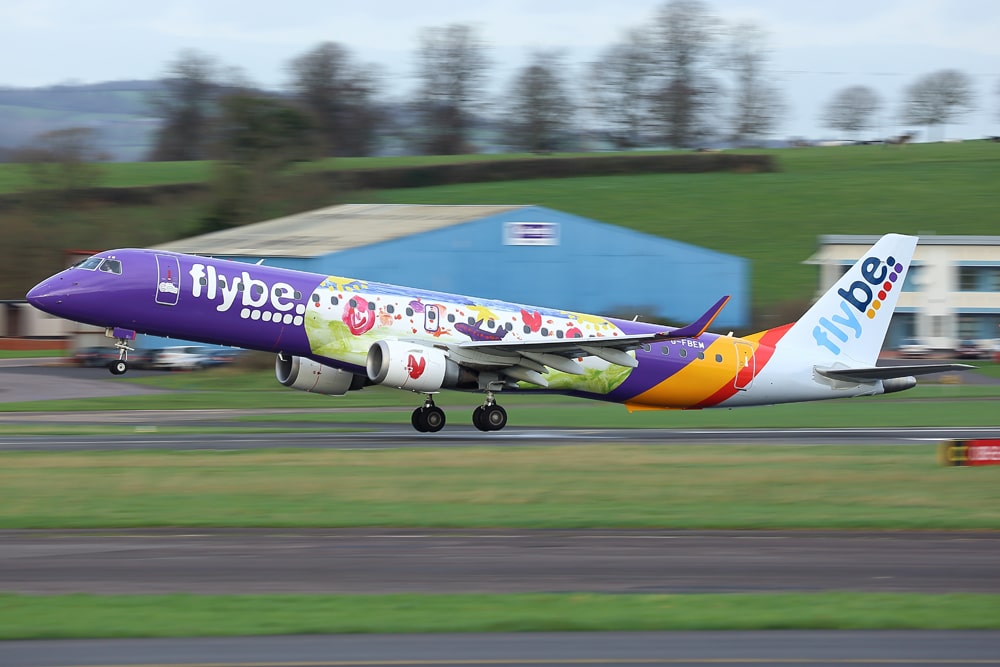 Fly to the Scottish Islands
Loganair, Scotland’s airline, flies to Barra – the only destination in the world to have a runway on the beach – Benbecula, Islay, Orkney, Lewis, Shetland and Tiree, while Hebridean Air Services offers flights too, including a sightseeing trip from Oban on Tuesdays (loganair.co.uk and hebrideanair.co.uk).

CAR TRAVEL
Travelling by car is what many of us choose to do on our trips away, because it allows us freedom, privacy and enables us to get to out of the way places. In school holidays, to save time and money, plan to leave at dawn or late at night to avoid traffic queues on popular routes such as the M5 and the A303, going out to the West. Ensure you have breakdown details with you in case of an emergency and always fill up your tank with fuel before you leave – you never know when a jam might strike. 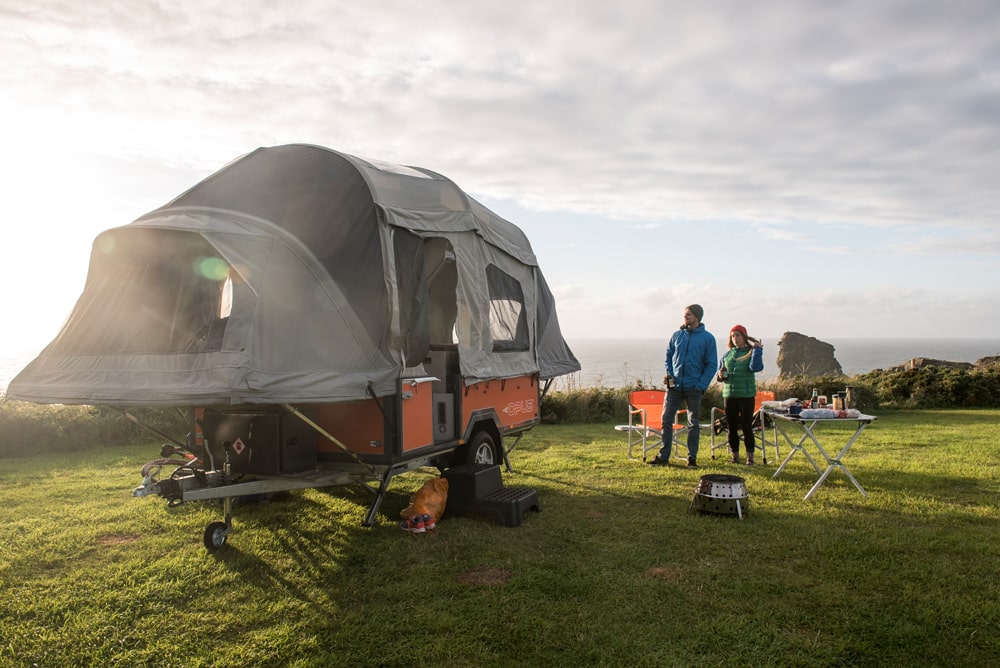 Of course as well as being a mode of transport from A to B, a car allows you to enjoy some of the coast’s best scenic driving routes – meander for up to a week along favourites, including the west coast of Ireland’s Wild Atlantic Way (wildatlanticway.com); the Scottish Highlands’ North Coast 500 (visitscotland.com); and Wales’ Coastal Way (thewalesway.com). For this kind of holiday, you might invest in a home on wheels, such as the folding, inflatable, genius Opus Camper. A standard model starts at £15, 995, while the best selling Full Monty is £18,995 and sleeps up to 10 people (opuscamper.co.uk). 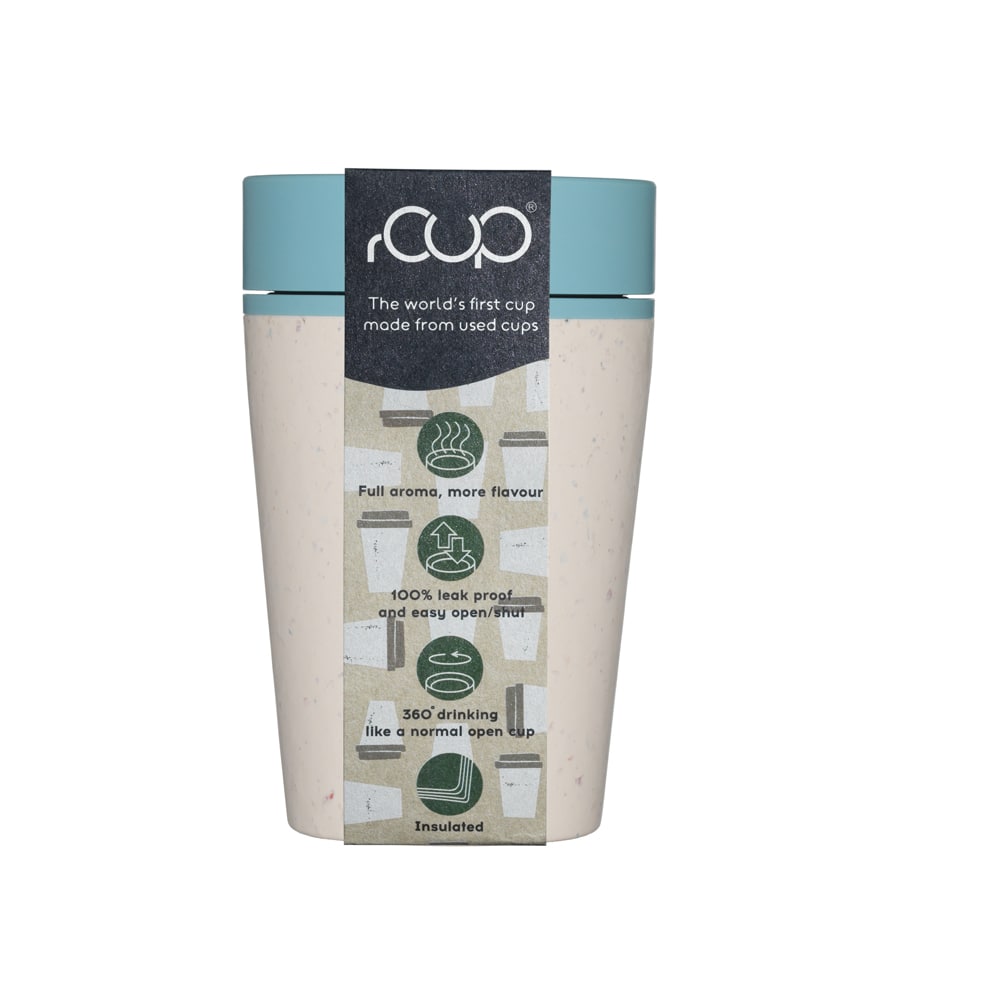 Read next… 10 best staycations in the UK, 50 best dog-friendly holidays in the UK or pick up the latest copy of coast magazine for more inspiration of coastal staycations.

Read next… 10 best staycations in the UK, 50 best dog-friendly holidays in the UK or pick up the latest copy of coast magazine for more inspiration of coastal staycations.