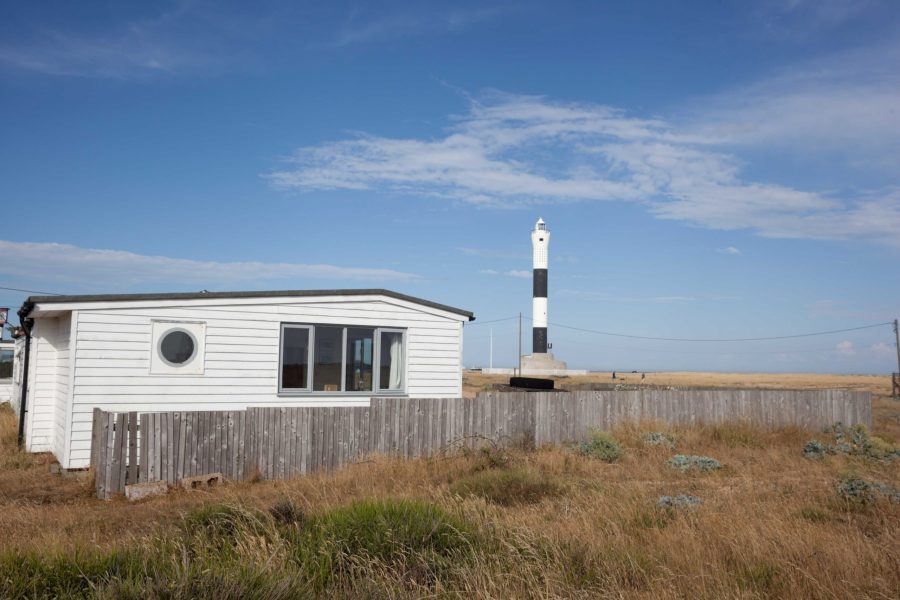 ‘The house is basically two railway carriages in a T-shape,’ Sara explains, as she invites me into her kitchen. She points to the floor: ‘We have left as many of the original features as we could. The kitchen was a cattle carriage and the channels for mucking out are still visible under the new floorboards.’ In the living room a partition wall is made from the side of the carriage and the curved ceiling can be seen in one of the children’s bedrooms. An original train door makes a novel entrance.

Unusual though it sounds, Sara’s holiday home is not the only house in the area with a railway carriage at its core. There are around 30 properties with the same origins dotted across the shingle beaches of Dungeness, ranging from modern architectural marvels to higgledy-piggledy shacks. Largely, these are the only homes scattered across this unique nature reserve. ‘When they closed the railway down, at the turn of the century,’ Sara explains, ‘they gave the redundant workers the abandoned carriages to live in. Obviously, planning permission regulations were very different in those days, and people just dragged them on to the shingle and set up home.’

‘Not so long ago,’ Sara continues, ‘many of them were in a very rundown state, but Derek Jarman’s stylish hut and sea-garden led to a revival of interest in the area, and now a lot of them are being renovated and rejuvenated.’

Sara, an interior designer and glasscutter, first heard that her property, The Old Log Cabin, was for sale through a private advert in the Evening Standard. ‘I was intrigued. It sounded so unusual, and I already knew the area, so we immediately came to see it. When we arrived, my husband, Richard, and I were amazed you could get an uninterrupted view of the sea like this in England. We put an offer in, and were over the moon when we heard we’d been successful.’

A STATE OF DISREPAIR

However, the property was in desperate need of repair. ‘It had belonged to the old lighthouse keeper, and was basically the original railway carriages boxed off to form a bungalow, with a garage held up by a bush and ceiling low enough to cause most people to stoop once inside. The wooden structure was not conventionally insulated and part of the roof leaked into the dining room. When it rained, water would pour in through the walls.

‘Obviously, the house needed total refurbishment, but we wanted to keep the original feel of the structure, we didn’t just want a modern glass box. My background in interior design gave me the confidence and skill I needed to draw up the plans and elevations myself, with the view to opening the property up to more light with the bi-fold doors facing the sea, whilst retaining as much of the carriage as we could. The building regulations at Dungeness were very strict, so we had some help translating my ideas to the planning department. We had to make sure we kept within the original footprint of the house, and strengthened the structure without digging into the shingle.

‘To begin with, the permanent residents seemed a little wary of us, and were concerned as to what we might do, but when they realised that we weren’t planning anything drastic, they were reassured.’

‘Now we split our time between here and London, and our two children, Calypso, nine, and Emerson, six, have a more balanced life. As soon as they break up we chuck everything in the car and head off. You can’t swim or sail from here, as there are too many currents, but Camber Sands, with its amazing sand dunes, is just 10 minutes away. We like to take the miniature steam train to the fairground, swim in the pool at the campsite, and then finish the day at the Pilot Inn with fantastic fish and chips. As well as being a beautiful nature reserve, it’s a good old-fashioned British holiday on the coast. My husband is also quite a keen bird-watcher, so he takes the children to the Bird Reserve to see the Marsh Harriers. Dungeness was actually the RSPB’s first reserve, created back in 1931.

‘It’s such a different way of life here. We eat better, we sleep better and we feel better. We are outdoors all the time, the children are freer and we are all closer to nature. It has transformed our lives. You can’t get broadband here and your mobile phone won’t work, so we really are “away from it all”.’

However, The Old Log Cabin hasn’t just given the Newman family great holidays and a healthier lifestyle, it has also inspired Sara to create new work. ‘I originally trained as an interior designer at Chelsea College of Art. Having worked in the industry for many years, I began to make my own pieces of art. I knew what I was looking for and it seemed easier for me to design them myself, rather than look for someone else who was making exactly what I wanted. When I had my children, I went freelance, and my creativity flourished. Now I specialise in upcycled glass. There are so many great shops in the area around Dungeness for picking up vintage and antique glass. I love pottering around all the little stores,
from Rye down to Hythe, and finding treasures. I then engrave these, and give them a new lease of life.

‘Many of my designs are derived from nature, and there’s a wealth of inspiration in and around Dungeness. There is an abundance of rare wildflowers and birds, and the patterns and shapes of the leaves and petals, or wings in flight, have been the subject of my recent work. I have made golden-coloured bee goblets, dandelion jugs, cow-parsley coasters and sea-urchin tumblers. Some people say Dungeness’ landscape is barren and bleak, but I find it beautiful. It’s one of the most inspirational places I know.’

To take a look at Sara’s range of upcycled glassware go to saranewmandesign.com

Sara's five favourite things to do in Dungeness

1 Kite-flying and dolphin-watching on Dungeness Beach, plus a walk up the old lighthouse, which has a fantastic view over the area.

2 Taking a trip on the RHD Railway.  Dymchurch has been a regular stop for us with the children’s fun fair and huge beach. If you’re lucky, Gladys, the bar car, will be running to ease the return journey!

3 Exploring the RSPB reserve. There are wonderful walks and sometimes children’s activities. Last time we went, we saw a dozen hobbies diving and swooping as they feasted on dragonflies.

4 Visiting the Sound Mirrors. It’s a lovely walk up, there’s good blackberrying to be had and the possibility of a dip in the lake to cool off.

5 Going to Camber Sands, with its huge dunes, is stunning.