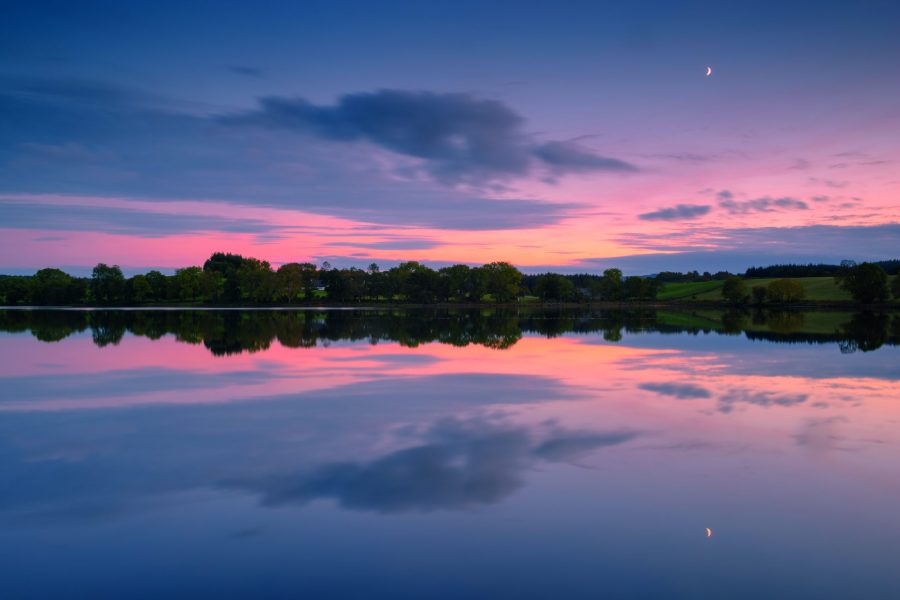 For a remote weekend getaway which revives and relaxes, head to the Solway Coast AONB in Scotland and discover lochs for walking and canoeing, a thriving arts culture and tranquil landscapes

The Solway Coast lies at the very beginning of Scotland, as you travel from the south. As Carlisle and The Lakes make way for Dumfries and Galloway, the first bit of coastline you reach belongs to Solway. Within a relatively small area there’s a wide variety of landscapes, from rocky cliffs and sheltered inlets to coastal towns at river mouths, such as my base for the weekend at Kippford. Once dubbed the Scottish Riviera, the Solway Coast attracted a refined visitor in its heyday and its heritage of ‘being a bit different’ lives on. As many of Scotland’s modern holidaymakers bypass the area on the motorway en route to the Highlands and Islands, those who ‘turn left at Carlisle’, as the tourist board’s slogan once read, are rewarded with an unspoilt beauty that is quiet and peaceful for much of the year. Due to its tranquillity, artists, sailors and creative folk are still attracted to its shores – there’s a strong culture to the area. It is an accessible part of Scotland well suited to a weekend break. 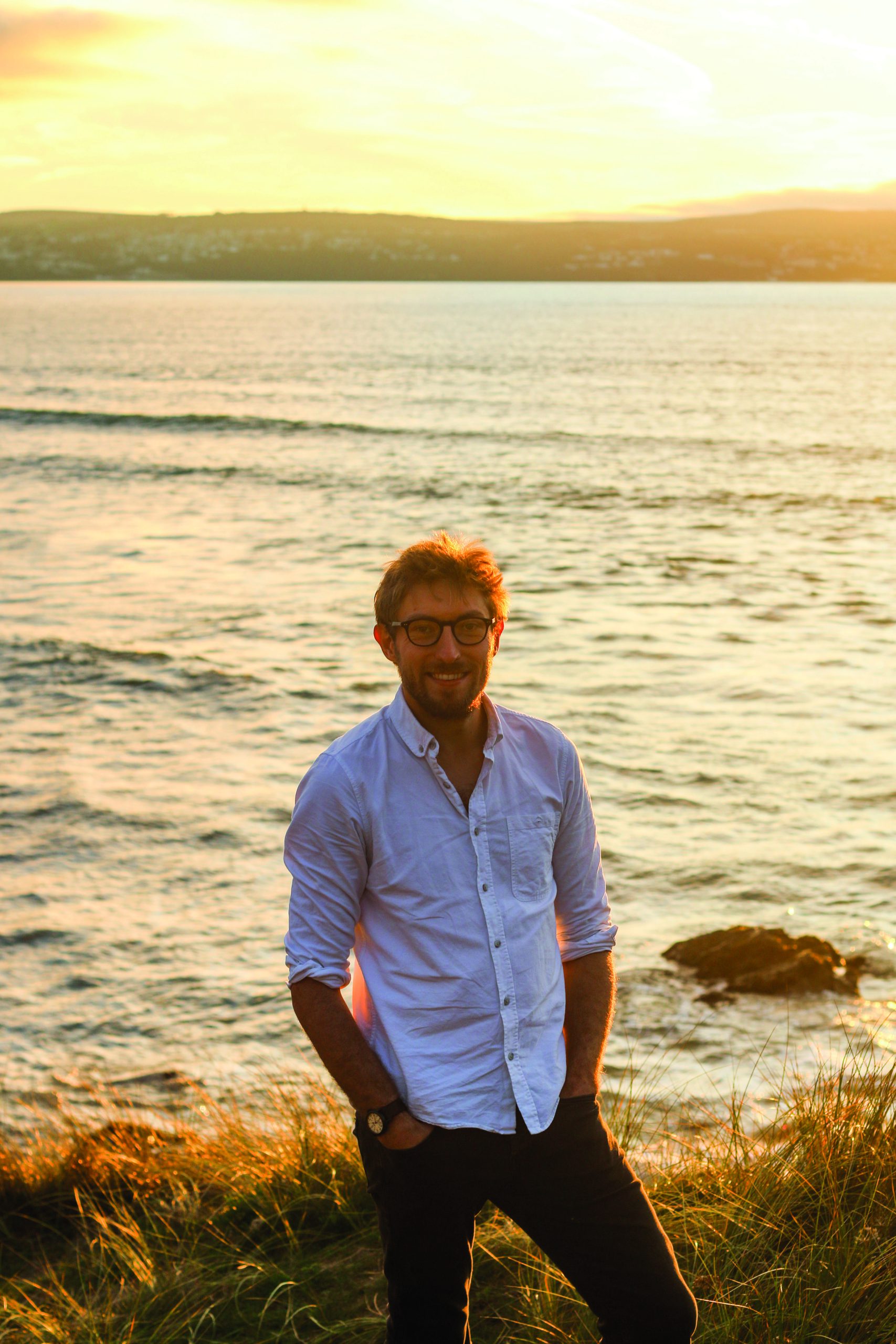 10AM SOLWAY’S SECRET WAR
A museum near Eastriggs, at the start of the channel of the River Esk, is my first port of call for the weekend, and helps to give me some context about the overall region of Dumfries and Galloway and its importance. The Devil’s Porridge Museum (01461 70002, devilsporridge.org.uk) tells the story of the role played by this part of Scotland throughout our wartime history due to its sheltered firth, quiet rural location and the ease of access from many important ports. I find it fascinating to learn all about HM Factory Gretna – the largest cordite plant supplying the battlefields of World War I – and the vital, tireless and heavy work done there by more than 12,000 women from around this area. The museum takes its curious name from the mixture of highly explosive guncotton worked on by these women in the surrounding factory buildings.

12PM ABBEY STROLL
With a greater understanding of the geography and social history of the region, I progress towards my base for the night, the picturesque village of Kippford. On the way, I stop in New Abbey, heading south towards the sea and close to the banks of the River Nith. It’s clear there’s a wealth of history here, and I stroll around taking in the ruined Sweetheart Abbey, founded by Lady Dervorgilla to commemorate the death of her husband, John Balliol, in 1273.

1PM MILL POWER
I then venture to the wonderfully preserved New Abbey Corn Mill (01387 850260, historicenvironment.scot/visit-a-place/places/new-abbey-corn-mill) which is a fully working, preserved water-powered mill that has stood since the 18th century. It once made much of the region’s oatmeal, today it’s a wonderful example of a complete Scottish mill – the buildings and machinery are just as the last miller left them more than 65 years ago.

2PM TAKING A GANDER
Before meeting the Irish Sea, the River Nith passes through the wetlands, mudflats and saltmarshes of Caerlaverock. Out on the water, I spot a variety of waders, geese, swans, godwits and sandpipers going about their muddy routine, and there’s the smell of salty seaweed in the air. My destination as I pass through this quiet landscape is the Caerlaverock Wetland Centre (01387 770200, wwt.org.uk/wetland-centres/caerlaverock), and I speak to Joe Bilous, the centre’s manager, about his time looking after such a large area of diverse wildlife. ‘When we started, there were only about 400 Barnacle Geese coming here, now we have more than 40,000,’ he tells me. The geese breed in the Arctic at Svalbard, and then winter on the wetlands here before making their journey back north when the weather warms up in late April. I leave marvelling at how brutal the 2,000-mile trip between Svalbard and Solway must feel to these creatures, who travel here for the first time when they are just three months old. For many of them here now, this is a return visit. The oldest Barnacle Goose reached 30 years old, and was said to have flown the equivalent of five times around the world during its lifetime. 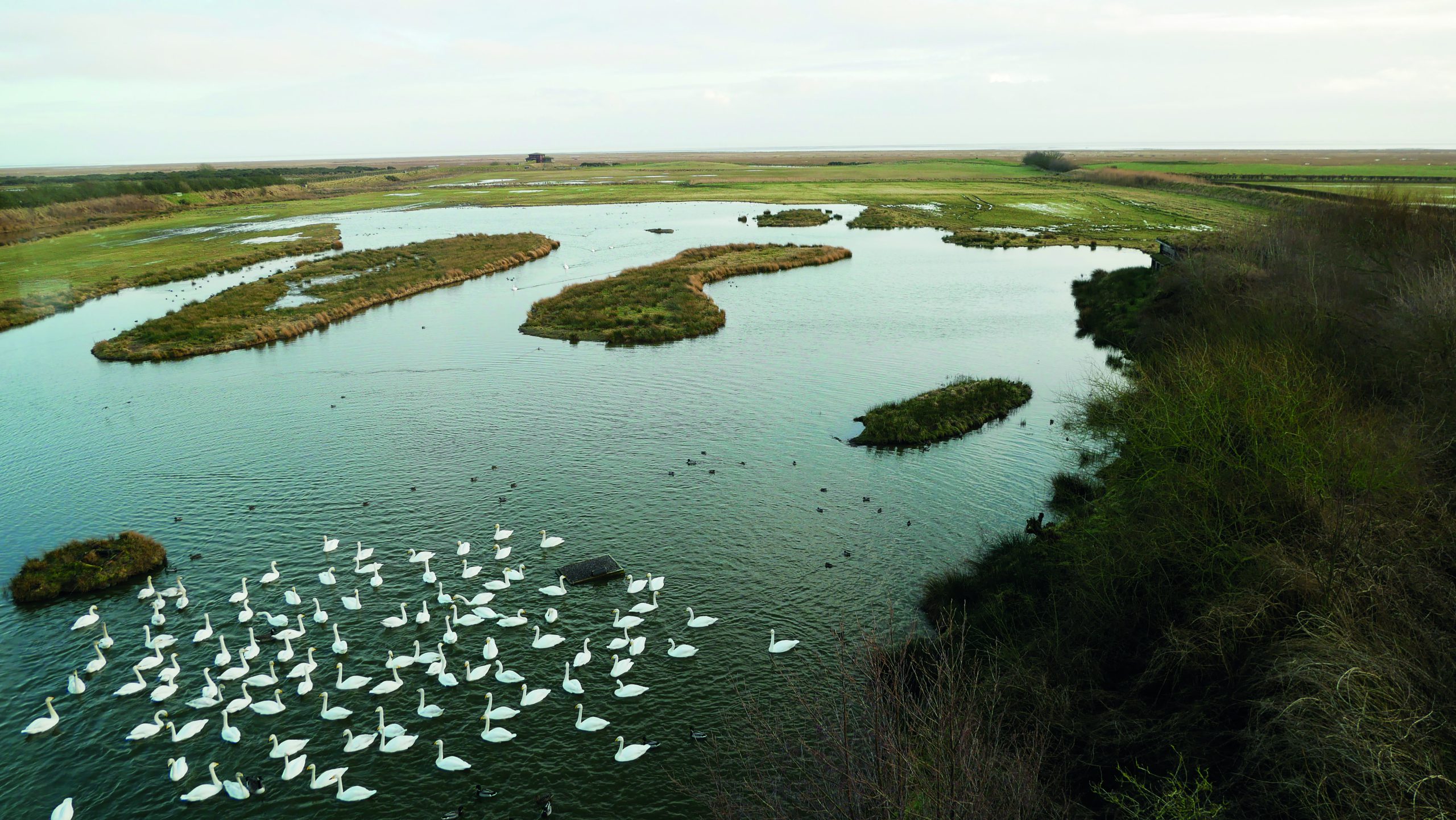 5PM A QUIET EVENING
Continuing my journey along the firth, I watch as the sun begins to set behind the hills along the edges of the Solway Coast. I see wind turbines in the distance, and through the evening haze and distant clouds the peaks of Helvellyn and Scafell Pike in the Lake District are visible signs that I’m at the very south of Scotland and very much in the territory of giant landscapes. I reach my accommodation for the night and immediately I am presented with a roaring fire, a home for my muddy boots, a slice of ginger cake and a large whisky. I think about the first day surrounded by the fauna of the Scottish hillsides finding their roosts for the night and gently falling silent.

Read next A Remote Island Escape: Discover Bryher in the Isles of Scilly

8AM A COASTAL STOMP
After an early cooked Scottish breakfast, I head to the cliff-tops at Sandyhills to embark on a walk I’ve been told provides some of the best views of the coastline in the area. I begin tackling the gentle inclines and descents of this part of the Solway coast, stopping often to sit on the serene shoreline and admire the undulating landscape of green fields leading down to secluded, deserted beaches. Two kayakers are preparing to launch off Cutcher’s Isle, and I reflect on the calmness of the water as it laps at the shore. Continuing the walk from Castle Point towards Rockcliffe and Kippford, the landscape changes, and low-lying islands such as ‘Rough Island’ stick out of this little inlet, known as Urr Water. The picture now is not unlike a Scandinavian archipelago, and I can see small deserted beaches in the distance on some of the islands, which are reachable at low tide, apparently. I arrive in the village of Rockcliffe and bask in its Sunday quietude as the sun begins to appear. 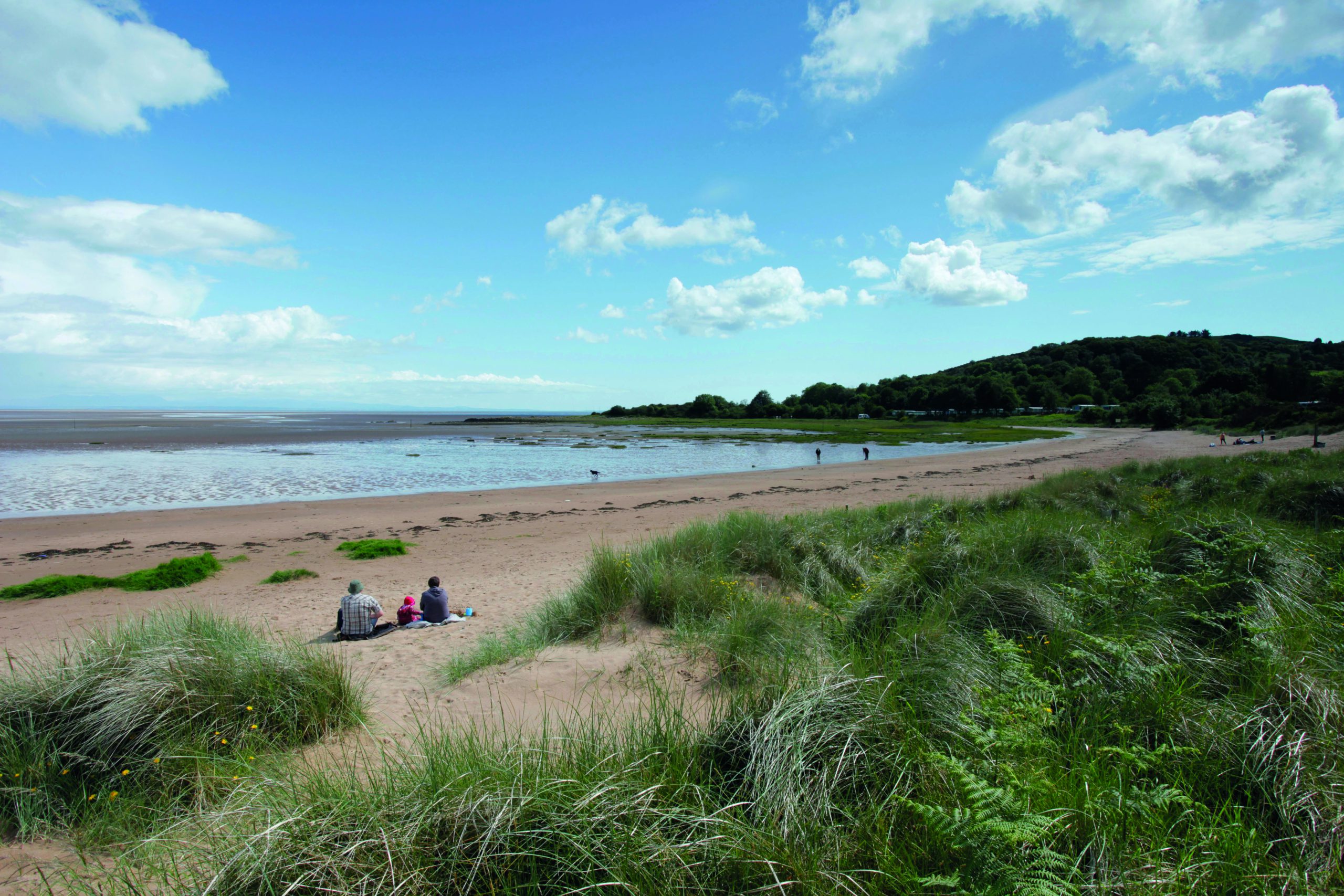 11AM A TOWN THAT DRAWS ARTISTS
Having finished my bracing coastal walk, I’m in need of the buzz of a small town not to mention some well-earned food and a coffee. I venture along a pretty, winding coast road out of Rockcliffe and Kippford, via Dalbeattie, to the trawling harbour of Kirkcudbright on the mouth of the River Dee. The town’s streets are full of grand, prominent architecture, and with a blend of Medieval history entwined with colourful Victorian buildings, I easily see why this place was once classed as the county town and was a haven for Scottish artists in the late 19th century. There’s still a creative feel here, and the plethora of independent shops and galleries such as The Whitehouse Gallery (01557 330223, whitehousegallery.co.uk) offer an eclectic mix of modern and traditional Scottish art and are perfect places to sit with a coffee. After perusing the scenic streets, I visit Broughton House, once the home of famous Glaswegian painter EA Hornel, with its stunningly preserved walled garden (01557 330437, nts.org.uk/Visit/Broughton-House).

1PM A TASTE FOR ADVENTURE
Feeling restored after lunch and coffee in Kirkcudbright I have a renewed sense for the outdoors and adventure, so I decide to head to the nearby Galloway Adventure Centre (01556 502011, lochken.co.uk). Situated on the beautiful banks of Loch Ken, the centre provides activities and adventure holidays for people of all ages, and even on a Sunday it was great to see so many group trips and school parties enjoying the facilities on offer, and getting out onto the water. I notice the clean smell of the trees, the mist on the shores of the loch, and – from the safety of a Canadian canoe – the real stillness of the water here in contrast to the restless Irish Sea.

4PM DESTINATION DISTILLERY
My time on the Solway Coast is nearly over, but before my journey home commences I decide I can’t leave Scotland without sampling some whisky. I stop at the closest distillery to the Scottish/English border at Annandale (01461 207817, annandaledistillery.com). It’s one of Scotland’s oldest operating distilleries, originally established in 1836, and having been bought by new owners and restored in 2007, it’s just about to produce its first release from the casks in nearly 100 years. There’s a smell of bourbon in the air, and I join one of the distillery tours (£8.50, 45 mins) to see inside its inner workings. The heat, smell and atmosphere are pungent with hops and barley, and it’s mesmerising to think that a drink we’re so familiar with is produced by the use of such an ancient method. Having sampled a small amount of the New Make Malt Spirit, I leave Scotland with a slightly springier step, and a new-found love for a wild, beautiful and under-appreciated part of a majestic coastline. 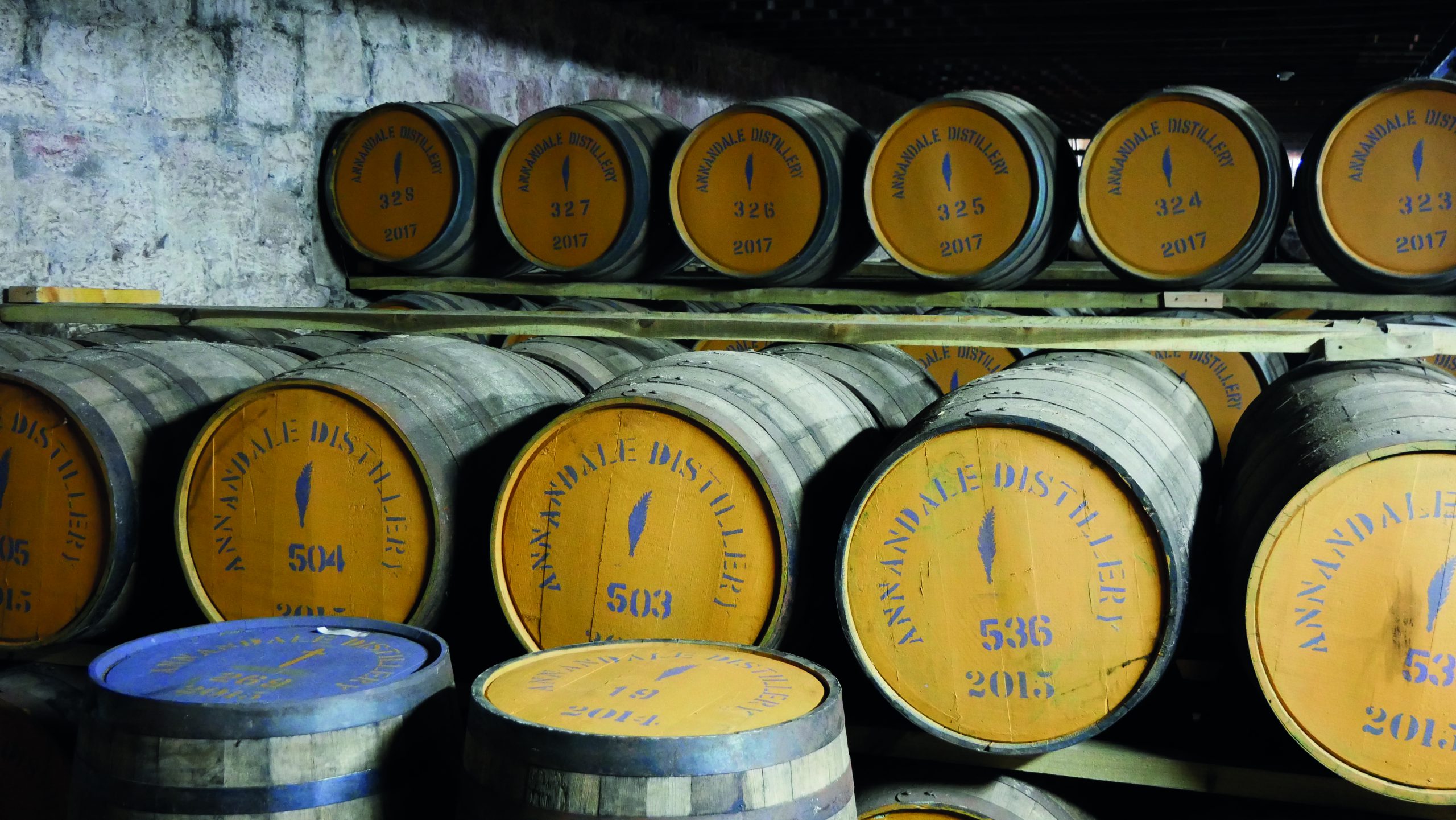 For more UK travel inspiration, head to our Coastal Places section or pick up a copy of Coast

WHERE TO STAY ON THE SOLWAY COAST

Barend Lodges. coast stayed at these Scandi-style Scottish lodges, perfect for families and groups looking for proximity to the coast, walking and outdoor activities. Three nights from around £297 (01387 780663, barendholidaylodges.uk).

Cavens Country House. Enjoy fine dining, warm hospitality and a homely feel in this secluded country house near the coastal hamlet of Carsethorn. Country double from around £140pp (01387 880234, cavens.com).

HOW TO GET THERE
Virgin Trains run via Birmingham New Street to Carlisle from London Euston and Bristol, linking most major southern rail services. You can also fly to Glasgow and rent a car to drive from there (approx 2 hours from
the airport).