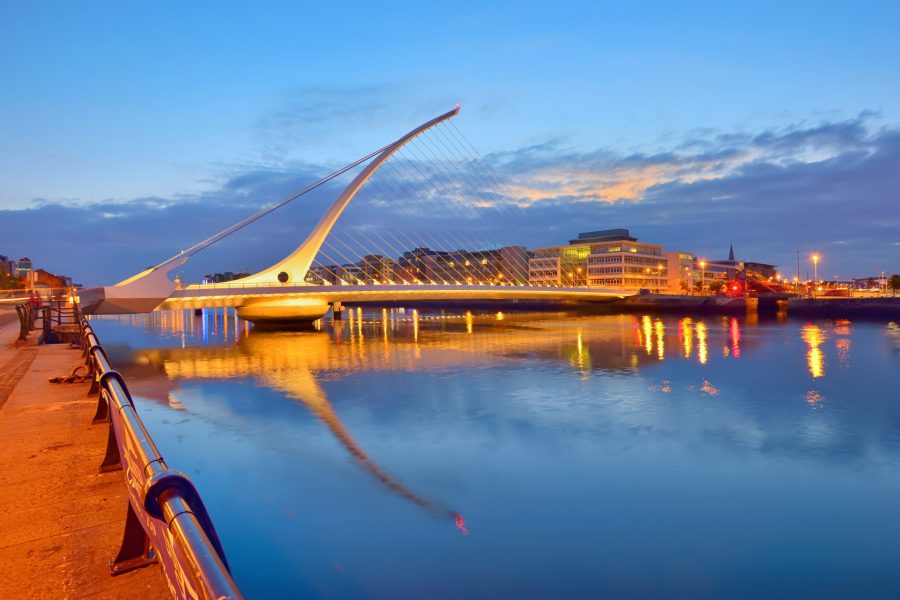 Fun to visit at any time of year, Ireland’s coastal capital comes alive at Christmas, when the atmosphere is ramped up a notch. Words: Tina Walsh. Photographs: Tourism Ireland

Straddling the River Liffey Estuary and stretching out to the Irish Sea, Dublin is one of the world’s great waterside cities. A hip and happening place that can rival any of its European counterparts, Ireland’s capital retains a charm all of its own and is at the very heart of Irish culture. Its stylish centre has lively bars, restaurants and historic buildings aplenty but if you need a break from city life, Phoenix Park – the city’s enormous green lung – and the string of fishing villages on its outskirts offer pastoral respite.

An attractive destination year round, Dublin is magical in December, when the streets are festooned with a thousand fairy lights, giant Christmas trees lit up to spectacular effect, and markets filled with all kinds of goodies. 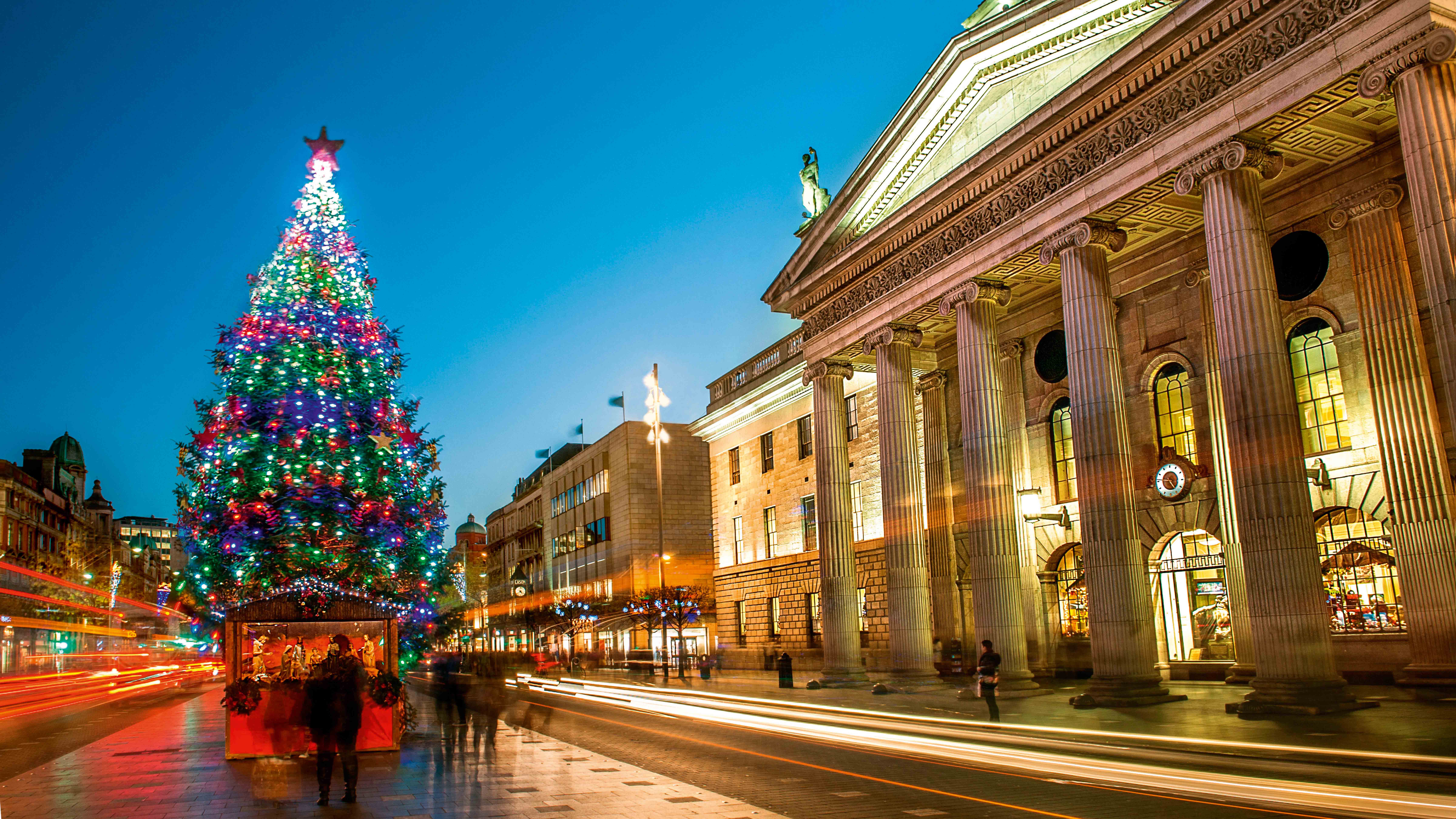 WALKING WITH REINDEER
It’s a bright, crisp wintry day so what better way to start it than with a stroll around Phoenix Park. At 1,750 acres, it’s one of Europe’s largest enclosed parks and is home to Dublin Zoo and Áras an Uachtaráin, the official residence of the president of Ireland. With more than 350 plant species, wetlands and a large herd of tame fallow deer, it’s charming at any time of year but even more so with a light dusting of frost and groups of excited children waiting to meet Rudolph – the animals’ large antlers make them dead ringers for their reindeer cousins. There are various free Christmas events running on weekends from 3-18 December – visit the live nativity, watch a Puppet Show on Sunday 18 December, listen to choirs and storytelling on Sundays (phoenixpark.ie).

A WARMING DRAM
Starting to feel the nip, we pop into Ryan’s, a landmark Victorian pub at the entrance to Phoenix Park, for a warming dram of Jameson’s whiskey, before heading off to The Winding Stair for lunch. The quayside restaurant and downstairs bookshop overlook the River Liffey and have been a popular meeting spot for writers and artists since the 1970s. The restaurant, which serves good, old-fashioned home cooking and Irish seafood, such as Dingle Bay crab and Roaring Bay mussels, is pleasantly packed with pre-Christmas diners (ryans.fxbuckley.ie; winding-stair.com).

DOCKSIDE MARKET
After lunch, we amble along the quay, in the direction of the river mouth, passing the iconic 19th-century, pedestrian Ha’penny Bridge. A short while later I reach another Dublin architectural icon: the Neoclassical, cupola-topped Custom House. A little further along is the Custom House Quarter – an area made up of George’s Dock and the CHQ Building, a restored, glass-fronted warehouse built in the 1800s that’s now filled with shops and restaurants. From 8-23 December (Thurs to Sun), CHQ will host its ‘I Believe’ Christmas Market, which will have a special focus on small-scale, independent Irish food producers and artisans. Come along and get in the festive spirit – enjoy a mulled wine or hot chocolate, pick up a few presents at the food and craft stalls, and children can send a letter to Santa (chq.ie/christmas-at-chq). 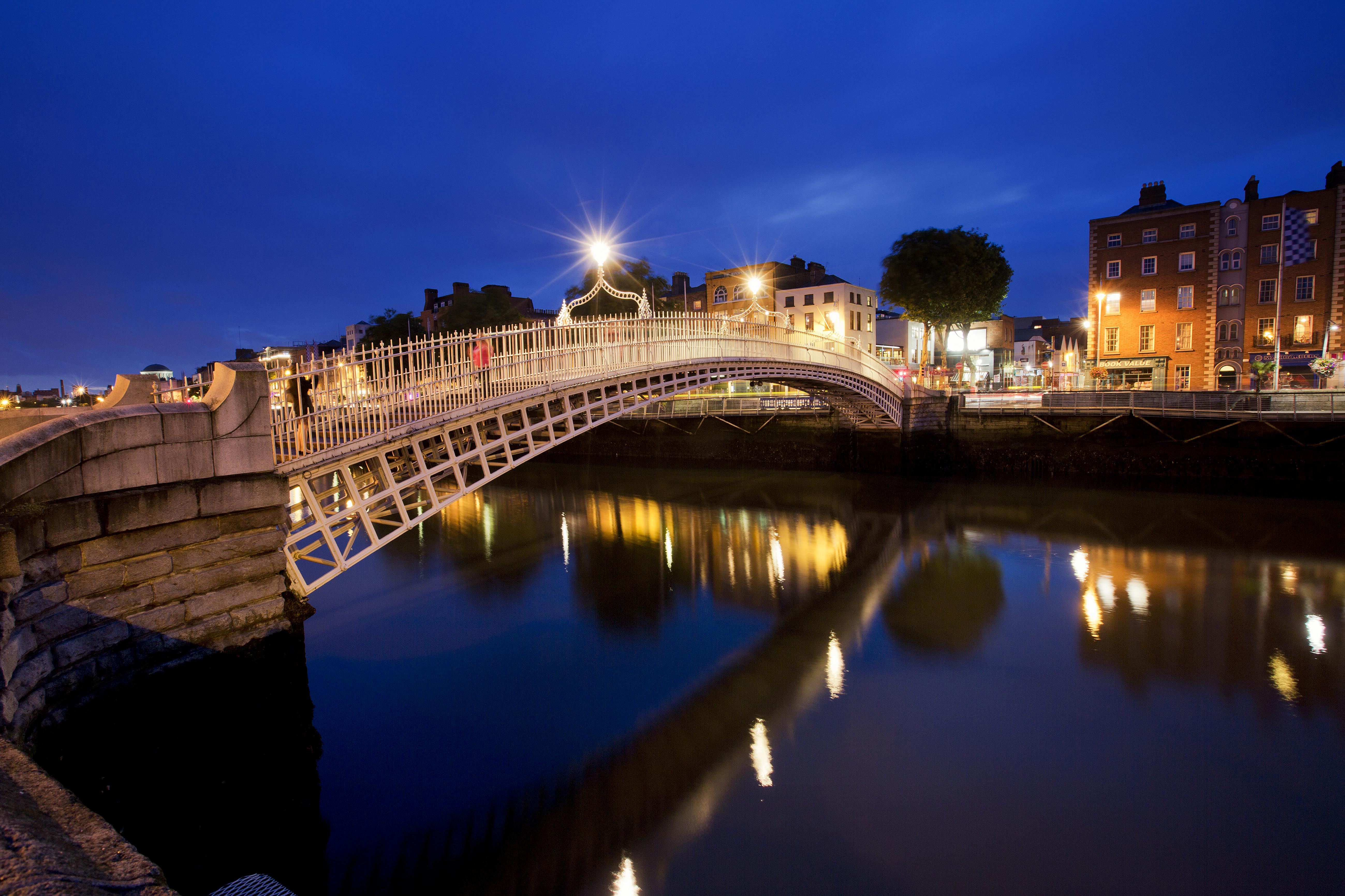 YULE SHOPPING
It’s impossible to come to Dublin at Christmas and not hit the shops, so I continue my festive retail therapy in the Grafton Street and Temple Bar area. The light is starting to fade and the narrow cobbled streets, strung with fairy lights, impart a warm glow. I buy a stylish woven throw from the Irish Design Shop and stock up on goodies – aged Parmesan cheese and Irish Angus beef – from the deli at up-market food hall Fallon & Byrne (irishdesignshop.com; fallonandbyrne.com).

FUELLING UP
All that shopping has worked up an appetite and it’s time for a visit to Hatch & Sons, a cosy dairy-style kitchen next to St Stephen’s Green, to try one of their famous blaas. This soft doughy white bread bun dusted in flour and – in this case – filled with delicious pulled brisket, is fine fuel for the rest of the evening (hatchandsons.co).

CHRISTMAS CHEER
We pay a visit to Against the Grain, a pub on lively Wexford Street. Owned by the Galway Bay Brewery, it specialises in nautical-themed craft beers, including Full Sail IPA and Stormy Port porter. On our visit, it’s full of laid-back locals getting into the spirit of things (galwaybaybrewery.com).

BESIDE THE SEASIDE
It’s a crisp, clear morning when we set off for Howth, a picturesque fishing village 10 miles north of the city centre and just a 30-minute hop on the train, or Dart (Dublin Area Rapid Transport). We walk along the West Pier, which is fronted by a string of restaurants, oyster bars and fresh fish stalls, as trawlers weave in and out of the harbour. At the end of the pier, Aqua serves hearty, warming dishes such as seafood chowder. With its floor-to-ceiling windows, this restaurant has great views of the Harbour Lighthouse and Ireland’s Eye, a small, uninhabited island just off the coast (aqua.ie). 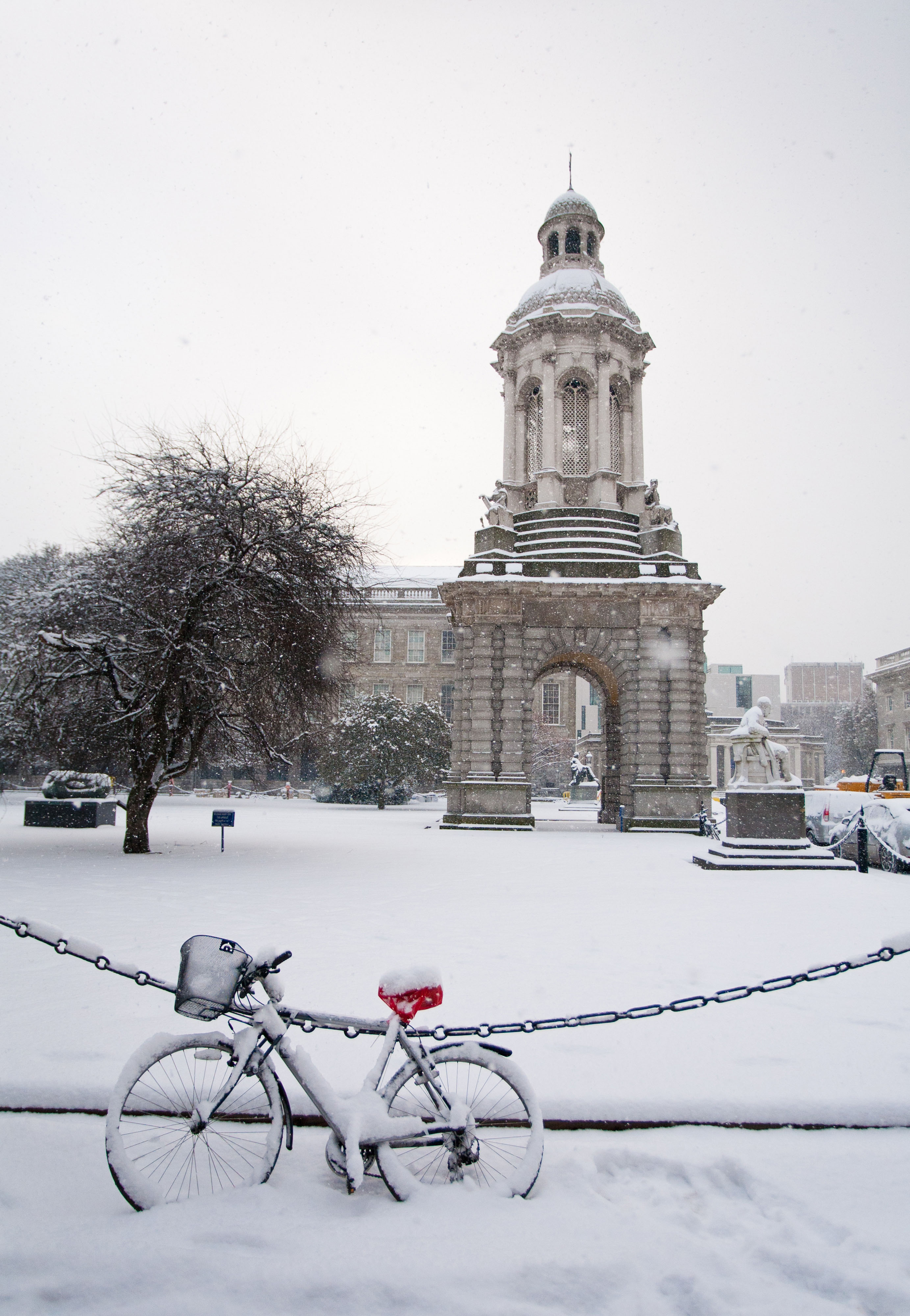 WINTER WONDERLAND
Back in the city centre, we work off lunch with a walk past Dublin’s historic landmarks. Snow has turned the grounds of Ireland’s oldest university, Trinity College, into a veritable winter wonderland. Nearby, white flakes coat the statue of Molly Malone, the mythic fishmonger whose days of carting cockles and mussels in a wheelbarrow were immortalized in a song that has become an unofficial anthem of Dublin. A couple of minutes later, we’re admiring the imposing turreted rotunda of Dublin Castle.

A CHRISTMAS CAROL
Before heading back, I stop off at Saint Patrick’s Cathedral where a carol concert is in full swing under the soaring vaulted ceiling. Carol services take place on most Sundays in December, and this year there is also a narration of The Snowman with singing from the cathedral choristers on 23 December at 4pm (stpatrickscathedral.ie).

ONE FOR THE ROAD
It wouldn’t be fitting to leave Dublin without one last Christmas tipple and the Palace Bar on Fleet Street, in the heart of Temple Bar, makes a suitably snug place to while away our last hour. All mirrors and mahogany panelling, this tiny Victorian pub was once a magnet for Dublin’s newspaper journalists, who would come to drink, talk and smoke long into the night. We follow their example and round off our stay with a glass of quintessentially Irish Tullamore Dew whiskey (thepalacebardublin.com).

For more weekend break inspiration, click here or pick up a copy of the magazine.

DYLAN
This five-star boutique hotel in Ballsbridge is a 10-minute bus ride from the central Temple Bar area. In December, a double room starts at £160 a night (dylan.ie).

THE DEAN
Its city-centre location makes this boutique hotel, with its roof-top bar and restaurant, a popular choice. In December, a double room starts at £136 a night (deanhoteldublin.ie).

HAMPTON HOTEL
This hotel is set in a row of elegant white Georgian terrace houses in Dublin’s Donnybrook neighbourhood. In December, a double room starts at £72 a night (hamptonhotel.ie).

HOW TO GET THERE
Aer Lingus operates flights to Dublin Airport from most major UK airports (aerlingus.com). Stena (stenaline.co.uk) and Irish Ferries (irishferries.com) run boats from Holyhead in Wales and P&O (poferries.com) runs ferries from Liverpool. For trains, see irishrail.ie. For more on the area, go to dublinatchristmas.ie and ireland.com.