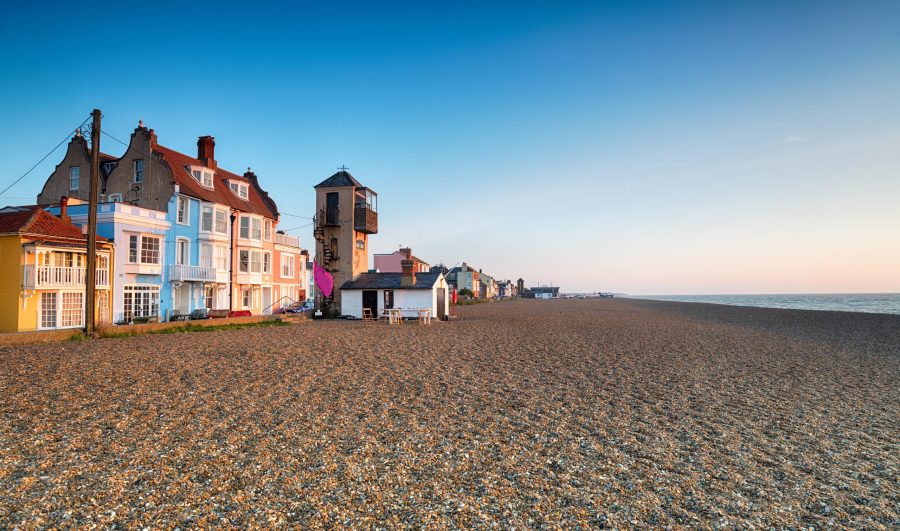 There is an untamed, timeless quality to this Suffolk coastal town where art, music and relaxation are the priorities. Words: Catherine Larner

Vast skies and moody seas, cultural riches, fine dining in restaurants and fish and chips on the beach, Aldeburgh provides the perfect escape from the noise and pressures of modern life. The town is a fashionable destination for couples and families from London and beyond, offering a magnificent sense of space as well as good independent shops and plenty to see and do in the surrounding area. It’s also popular with music lovers keen to explore the former haunts of the composer Benjamin Britten, who lived and worked here.

Each summer, this corner of Suffolk hosts the internationally renowned Aldeburgh Music Festival (10-26 June, aldeburgh.co.uk). First conceived by Britten with his partner, tenor Peter Pears, and writer Eric Crozier, the festival is largely based in Snape Maltings Concert Hall, a 15-minute drive inland. The rustling reedbeds and the River Alde provide a magical natural setting for the wonderful range of live music performances.

The arts are celebrated throughout the year, starting with the Literary Festival organised by the Aldeburgh Book Shop in March, the Aldeburgh Carnival in August, the High Tide Theatre Festival in September, and the Documentary Festival held at the original 1920s cinema in November. But if you don’t time your visit to coincide with one of these events, there’s still plenty to keep you happy and occupied in the area. 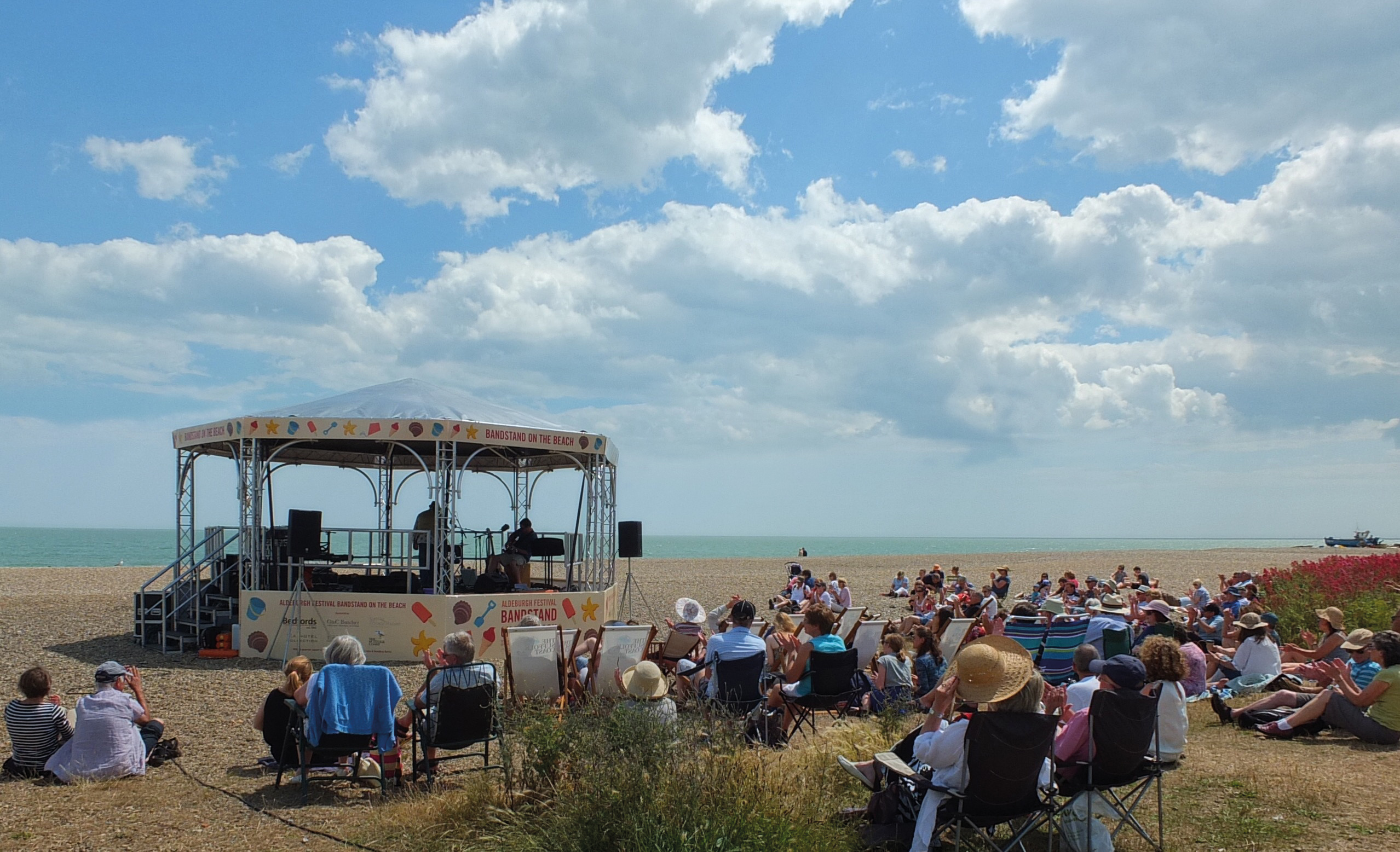 8AM FIRST LOOK
Woken by seagulls cawing, I take an early morning walk before breakfast. My cottage is just a few paces from the seafront and I can walk the length of the town along the small lane which runs between the shingle beach and a row of higgledy-piggledy, ice cream-coloured properties. Slipping through an alleyway onto the High Street to pick up a latte and pastry from Munchies café, where my mouth waters at the crab, lime and guacamole sandwiches being prepared for lunch, I make a mental list of shops to revisit later in the day. There are home and gift stores, clothing chains and boutiques, galleries, antiques, a second-hand bookshop and a deli as well as an ice cream parlour and sweet shop. A little way out of town, I walk along a spit of land between the beach and the river. At the far end is a Martello Tower built as a fortress in the Napoleonic wars, but now available as a holiday let through the Landmark Trust.

10AM THE PROMENADE
Retracing my steps along the front, the town is coming alive and some hardy souls are taking a dip in the sea. I walk on, past the boating lake and the Moot Hall and take pictures of the fishing boats on the beach, nets strewn in the sun. As the town slips back and the marsh meets the beach, I turn towards the sea to inspect Scallop, Maggi Hambling’s stainless steel sculpture on the shingle. At four metres high, it has caused controversy in the town but I enjoy quiet moments alone in its shadow. 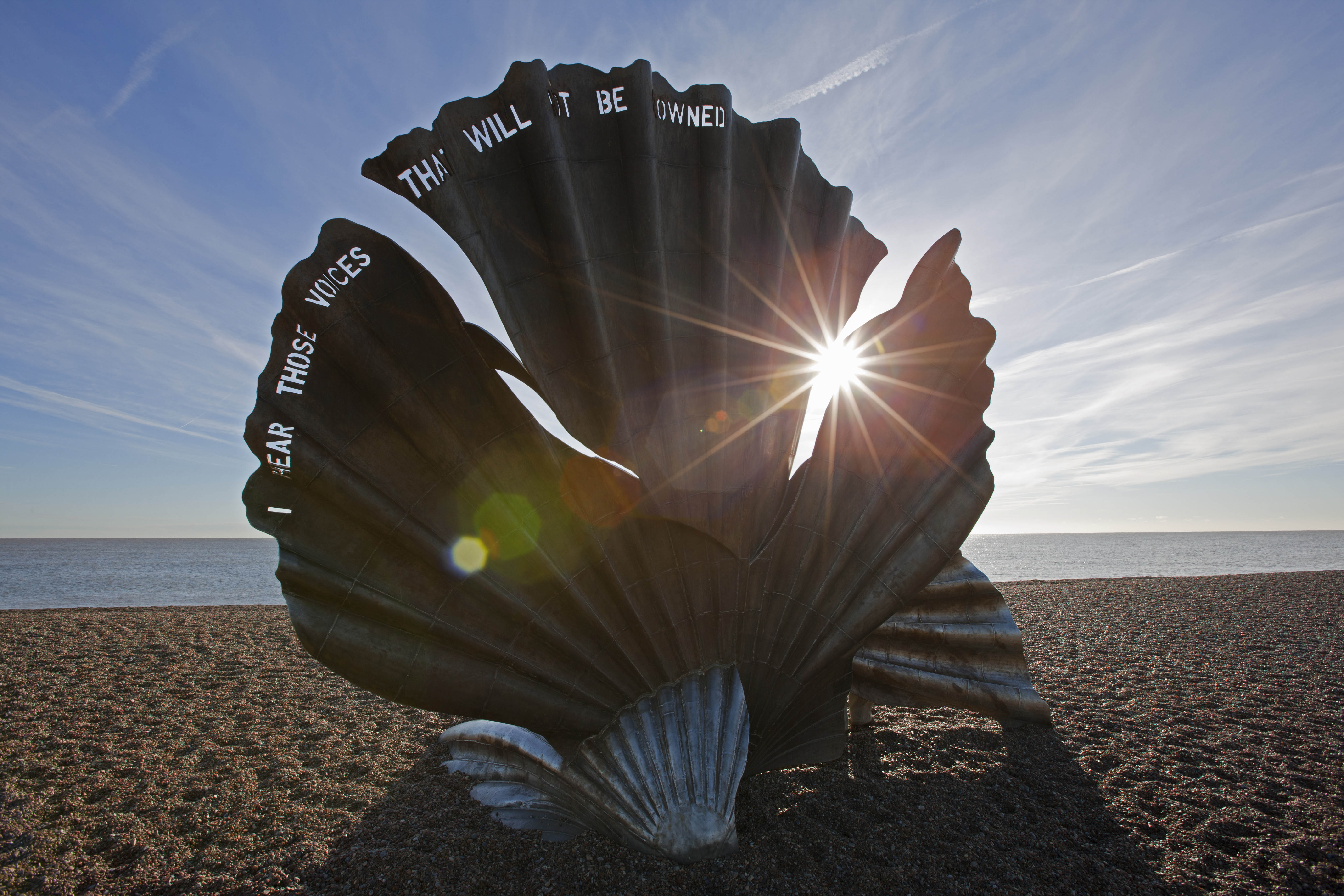 12PM MUSIC ON THE BEACH
Back towards town, there are now people in deckchairs around a bandstand on the beach where a quartet is playing. This is one of the free lunchtime events organised by Aldeburgh Music each day of the festival, showcasing local musicians and non-classical acts. Also, in the Pumphouse on the marshes are fringe events – indie, folk and world music as well as comedy, cabaret and theatre. I pause to listen then walk on to the South Lookout. One of two towers originally built to spot boats in trouble at sea, it is now owned by art dealer Caroline Wiseman, who runs exhibitions and activities throughout the year (aldeburghbeachlookout.com).

2PM VISITING BRITTEN
The queue for Aldeburgh Fish and Chip Shop snakes down the street but everyone waits patiently, and then we troop like pilgrims to the beach with the aromatic paper parcels. After devouring every morsel, I catch a free bus from the High Street to The Red House, on the outskirts of town on Golf Lane. The home of Benjamin Britten for the last 20 years of his life, this large house in extensive grounds is very much as he left it; walking around inside, there is a sense he’s only just left the room (01728 451700, brittenpears.org). 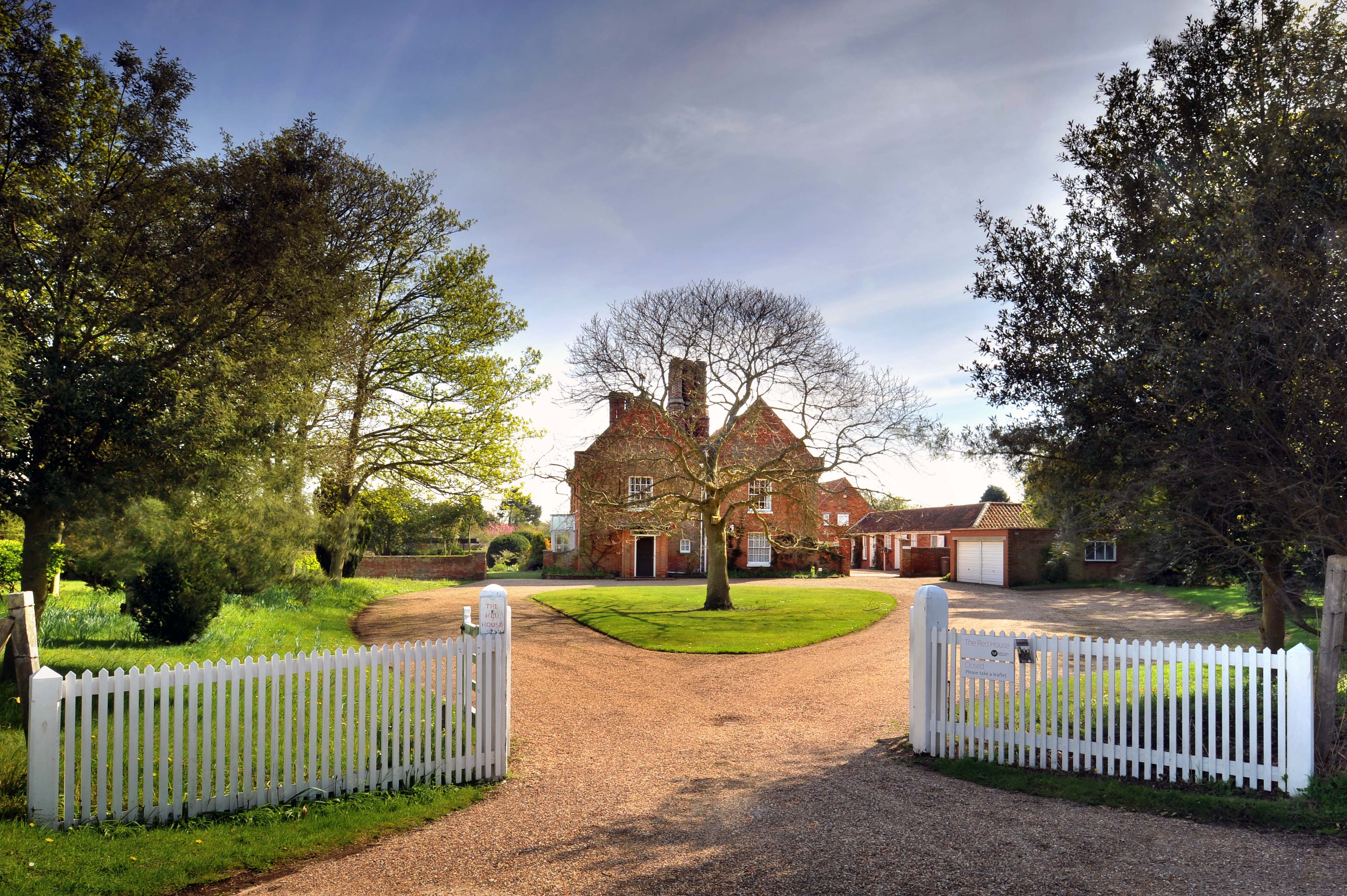 8PM FISH AND FLICKS
I take an early supper from the pre-cinema menu at the Lighthouse restaurant – butternut squash salad followed by fish pie for just £10 – and then catch a film at the independent cinema. The extensive programme includes recent releases and National Theatre Live streamings (lighthouserestaurant.co.uk, aldeburghcinema.co.uk).

10AM BIRDSONG
Today I make the 20-minute drive to Minsmere, the RSPB Nature Reserve. For the past three years, BBC Springwatch has been based here and miles of cables can be seen alongside the paths in May and June as the crew captures the antics of Suffolk’s wildlife. This year it’s also one of the locations for a 20-hour marathon of music and birdsong organised by Aldeburgh Music (rspb.org.uk/minsmere).

2PM SEA VIEW
Feeling invigorated and hungry after my long walk in the fresh air, I head back to town for lunch at the Seafood & Grill restaurant at The Brudenell Hotel. It’s perfect for people-watching, whether seated on the terrace or at a window seat, and I tuck into an Aldeburgh cod fishcake with poached egg on samphire.

4PM RECITAL AND REEDBEDS
Within the programme at Snape Maltings, there is a short recital this afternoon, so I drive along the A1094, park up and walk through the reedbeds and along the river which hem the buildings at Snape. There are places to eat and shop for books, antiques and clothes, but I decide simply to soak up the atmosphere before listening to the music in the concert hall. 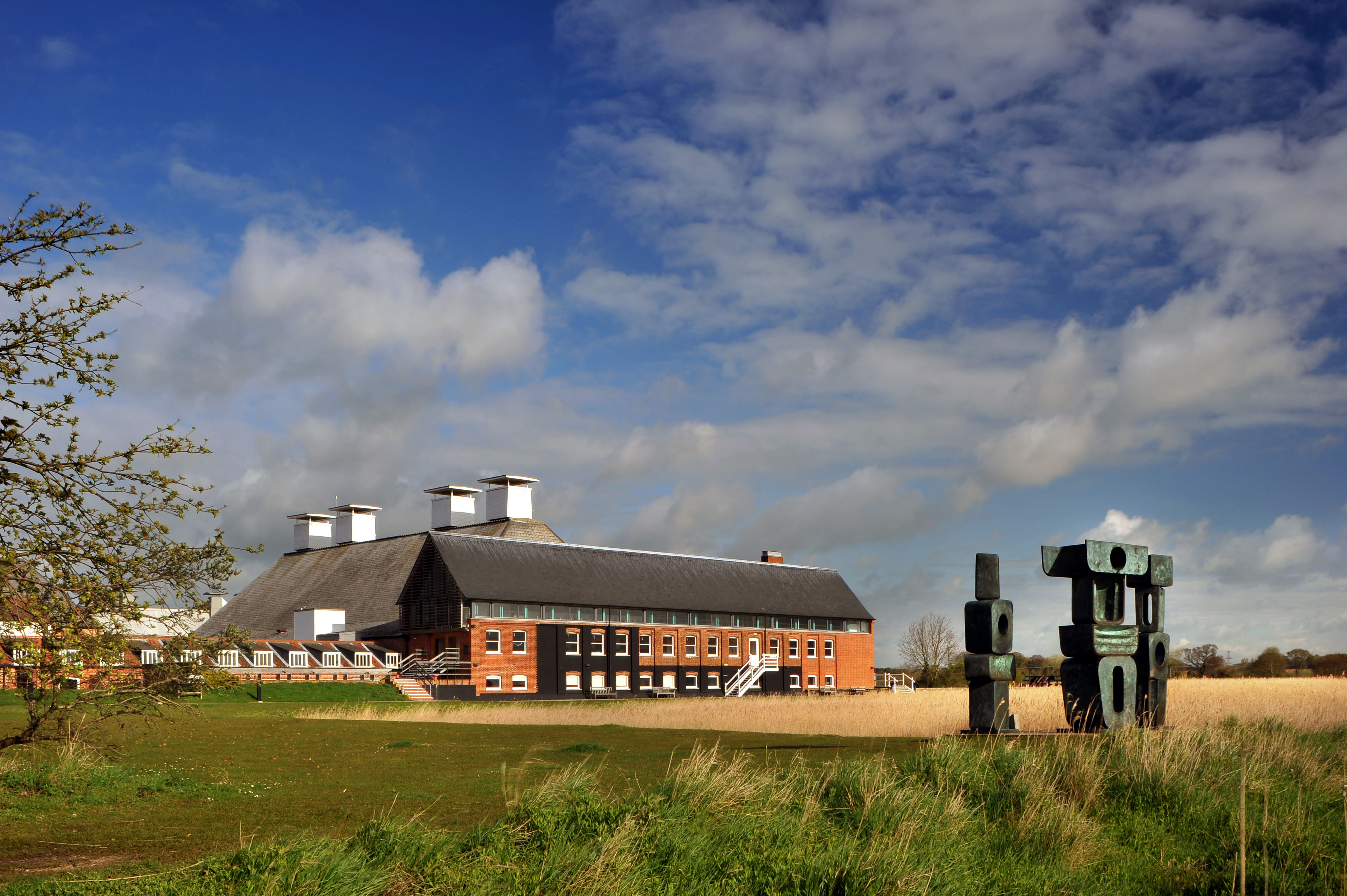 For more ideas for weekends away, click here or pick up a copy of the magazine.

STAY AT…
THE BRUDENELL
Well situated at the end of the town, this modern four-star hotel provides luxurious accommodation and tasty meals. In June, bed and breakfast starts at £205 a night (01728 452071, brudenellhotel.co.uk). There are two other hotels in the town: the three-star White Lion, and The Wentworth, which is family-run.

EDINBURGH COTTAGE
This quirky and comfy cottage is tucked into a quiet lane between the beach and the High Street. It sleeps five (and a dog). In the high season it costs £816 for seven nights (01728 454724, suffolkcottageholidays.com).

HOW TO GET THERE
Aldeburgh is about two to three hours from London. By car, it’s a straight run up the A12, turning off at the A1094. There are frequent trains from London Liverpool Street to Saxmundham via Ipswich, and then it’s a short taxi ride to Aldeburgh.