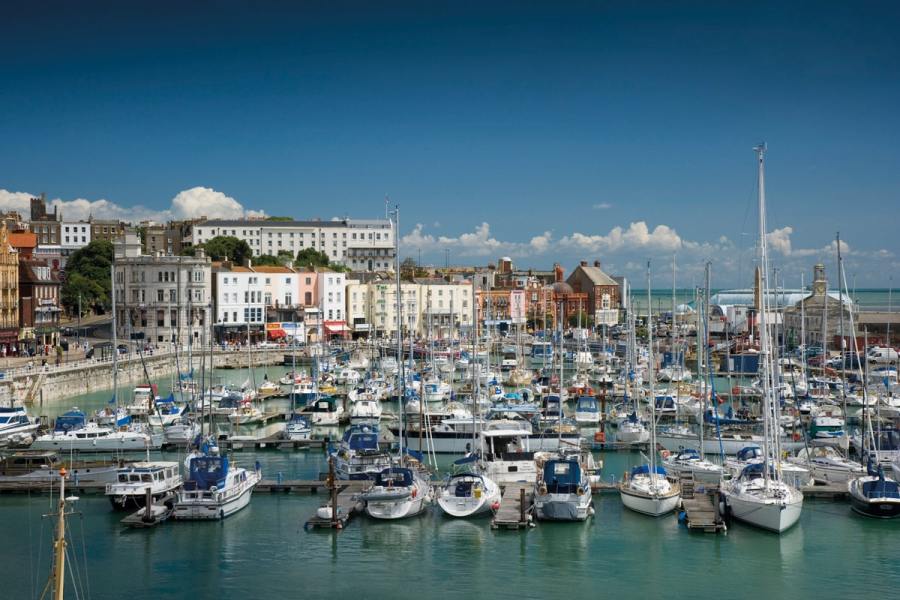 Back in the days of tall ships, the waters off Ramsgate provided a unique haven for shipping, and hundreds – even thousands – of vessels would have been anchored just offshore at any one time. The reason for this is a long, thin collection of shifting sandbanks called The Goodwin Sands. When a storm at sea generates a swell to hit the coast, these waves instead crash on The Goodwins and this creates a calm body of water between the land and sandbanks, known by seafarers as The Downs. In most conditions this anchorage is a safe space for boats of all shapes and sizes, which is why the sea off Ramsgate became an important stopping-off point for boats at the beginning or end of their voyages, taking shelter while waiting for a fair wind and tide to either head up into the North Sea or out into the English Channel and the great Atlantic beyond. 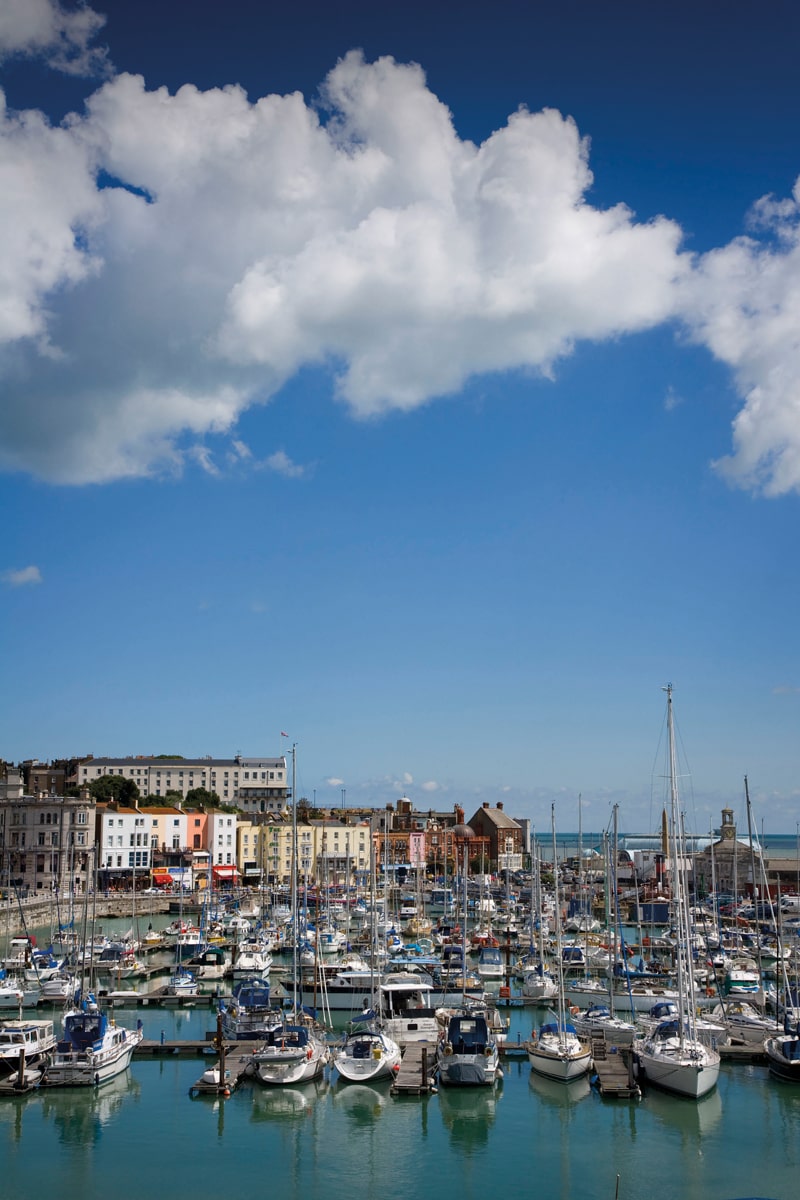 But when boats started using engines, the wind direction became less important and The Downs lost its vital importance. Instead of anchoring offshore, passing sailors now stop off in the Royal Ramsgate Marina instead. The shelter is fantastic and there are delights ashore too – more than enough to wait out a tide drinking coffee, eating fish and chips or even limbering up, with some yoga.

The Romans landed here around 2,000 years ago and Ramsgate has seen a lot since then, including a visit from King George IV, who granted its royal designation in 1821, and the embarkation of ‘little ships’ of Operation Dynamo, the Dunkirk evacuation of 1940. A more recent invasion has come via high-speed rail links to London, as legions of affectionately named DFLs (Down From London-ers) unload at the train station, strolling along to the harbour to soak up the salty sea air. While a minority complain about this influx, without a fresh stream of people Ramsgate would probably not have some of those aforementioned delights. Just up the coast in Margate is the magnificent Turner Contemporary art gallery, Haeckels’ premium seaweed beauty products and Curve Coffee Roasters – also born from better infrastructure connections with the capital. 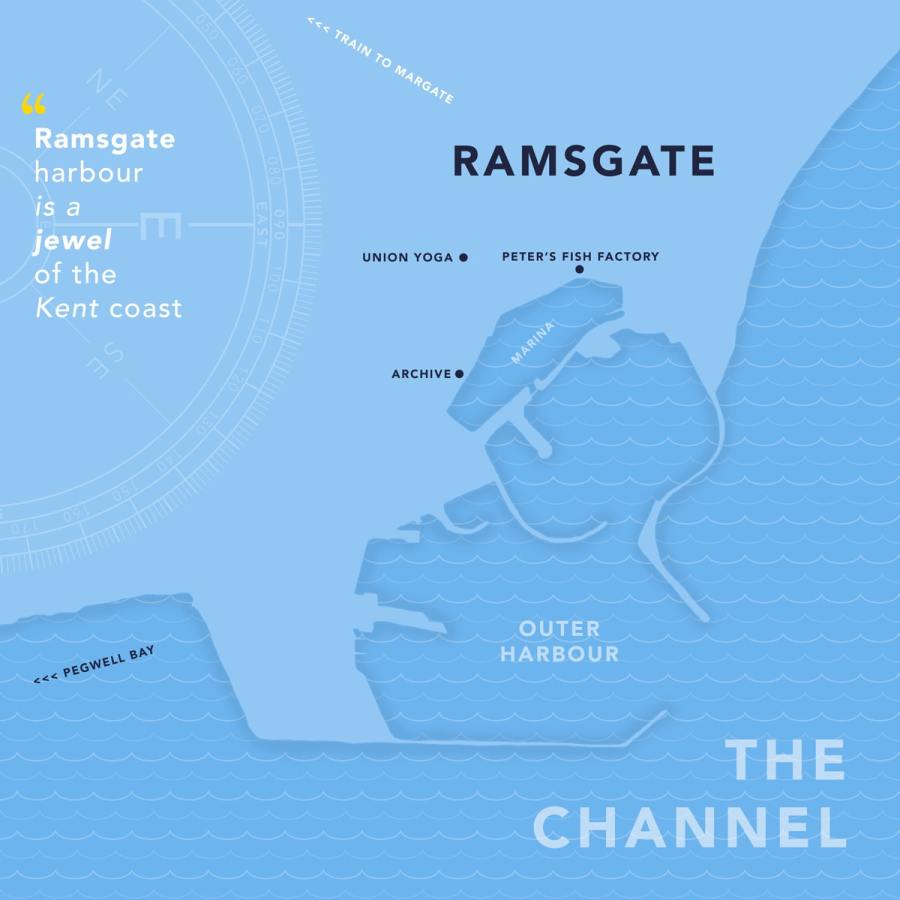 By sea, though, the logistics of getting to and from Ramsgate take a little more planning. While waiting, if you like to get your heart pumping then there are plenty of activities to get your fix. The highest-adrenaline option would be kitesurfing at nearby Pegwell Bay with Kite Pirates’ kitesurfing school. As the bay is shallow, it’s the perfect place to learn how to kitesurf, as you can stay in your depth, making it easier to hop onto your board and get going. While you’re there with your high-tech gear, take a moment to imagine the Roman fleet rowing past and landing on the beach two millennia ago. They would probably be equally mesmerised by us, strolling along, post-surf, sipping on a takeaway latte. What would they make of our modern lives? While the coast was purely practical for them, it has greater significance for us today as a place to switch off the tech, put the screens away and dive back into nature.

Waiting for you Tide – How to Spend 12 hours in Ramsgate

You’ve got 12 hours until a favourable tide pushed you along the coast. Here’s how to make the most of those hours.

Read more about William’s family journey to realise his dream of setting out on an epic family sailing journey or pick up the latest copy of coast magazine for more marina life updates from around the coast.