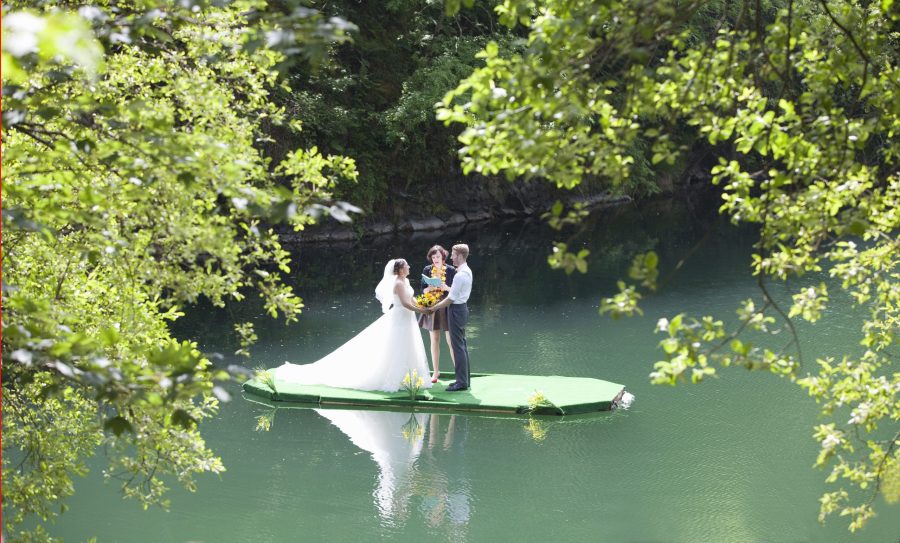 Freshly engaged after a romantic Valentine’s Day proposal by the sea? The British coastline offers some uniquely romantic settings in which to marry – from lighthouses and clifftop castles to beach ceremonies held on the shore. Words: Alex Reece

FOR… A GLAMPSITE SETTING
Cornish Tipi Weddings, Nr Port Isaac, Cornwall
Just five minutes from the Atlantic coast of North Cornwall is this dreamy valley glampsite, which specialises in wildly romantic outdoor weddings from Easter to the end of September. A wood, willow and canvas pavilion encircled by trees is licensed for ceremonies – after which you can head to the nearby seashore for coastal photographs. Enjoy post-nuptial Champagne (note: no corkage) and canapés with your guests in a large tipi, before moving on to the marquee meadow for the wedding breakfast. Celebrations can be themed to suit your personal style – from formal to festival vibe. And at the end of the night, there's no need for taxis as everyone can be accommodated on site. (01208 880781, cornishtipiweddings.co.uk). 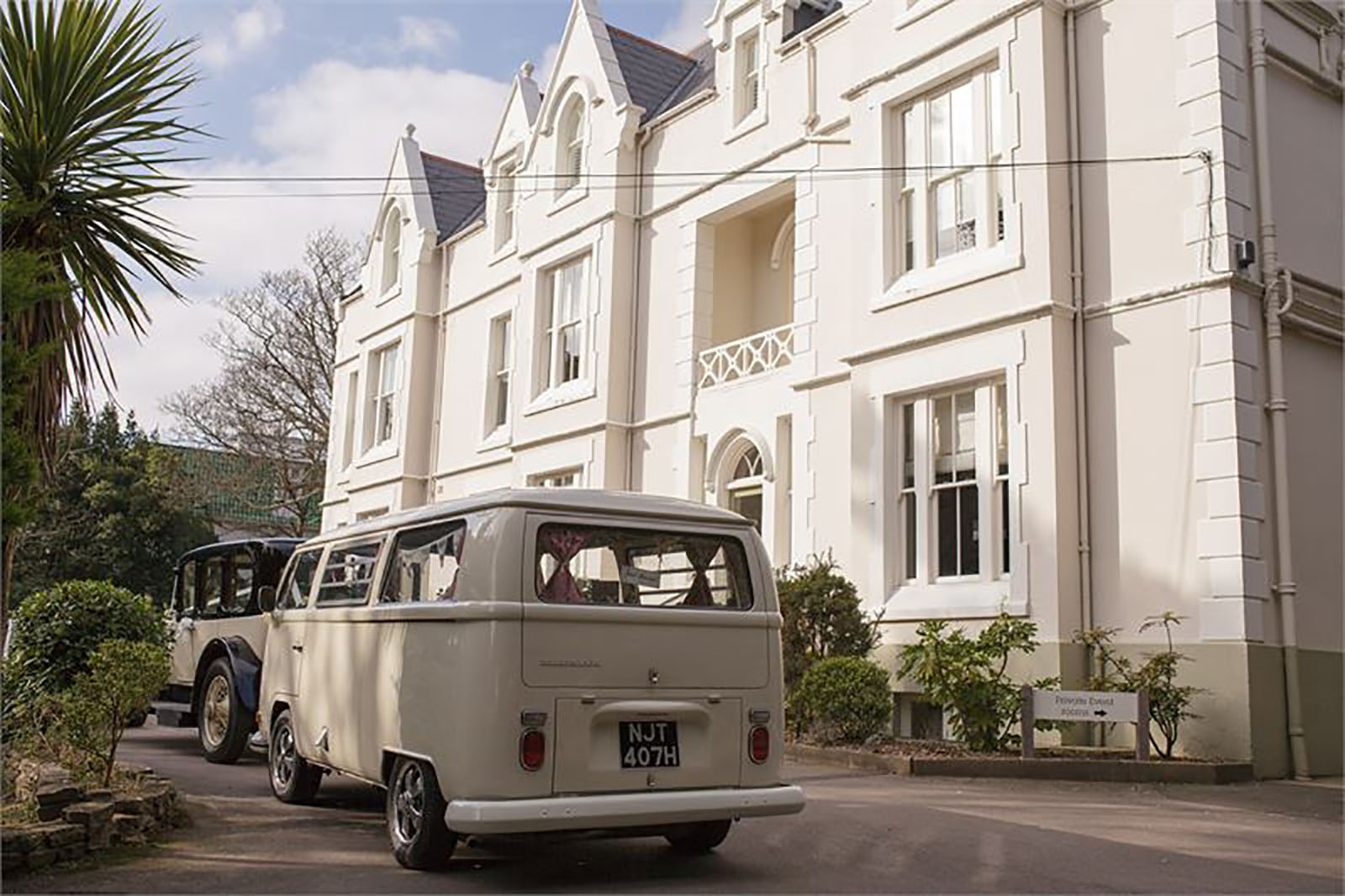 FOR… VEGAN NUPTIALS
The Green House Hotel, Bournemouth
Since opening in 2010, this award-winning boutique hotel, housed in a handsome, Grade II-listed villa, has put sustainability and ethics at the heart of everything it does – including the weddings hosted here. Fittingly, The Green House Hotel has just launched a Vegan Wedding Package to meet growing demand. Not only will all the catering – plus the bespoke-made cake – be free from animal products, but also the finer details, such as the make-up for the bride (supplied by Greener Beauty). Leather-free footwear can be sourced for the wedding party, too. Meanwhile, the flowers used for the bouquets and table arrangements are organic, Fairtrade blooms grown in the UK. (01202 498900, thegreenhousehotel.co.uk/weddings). 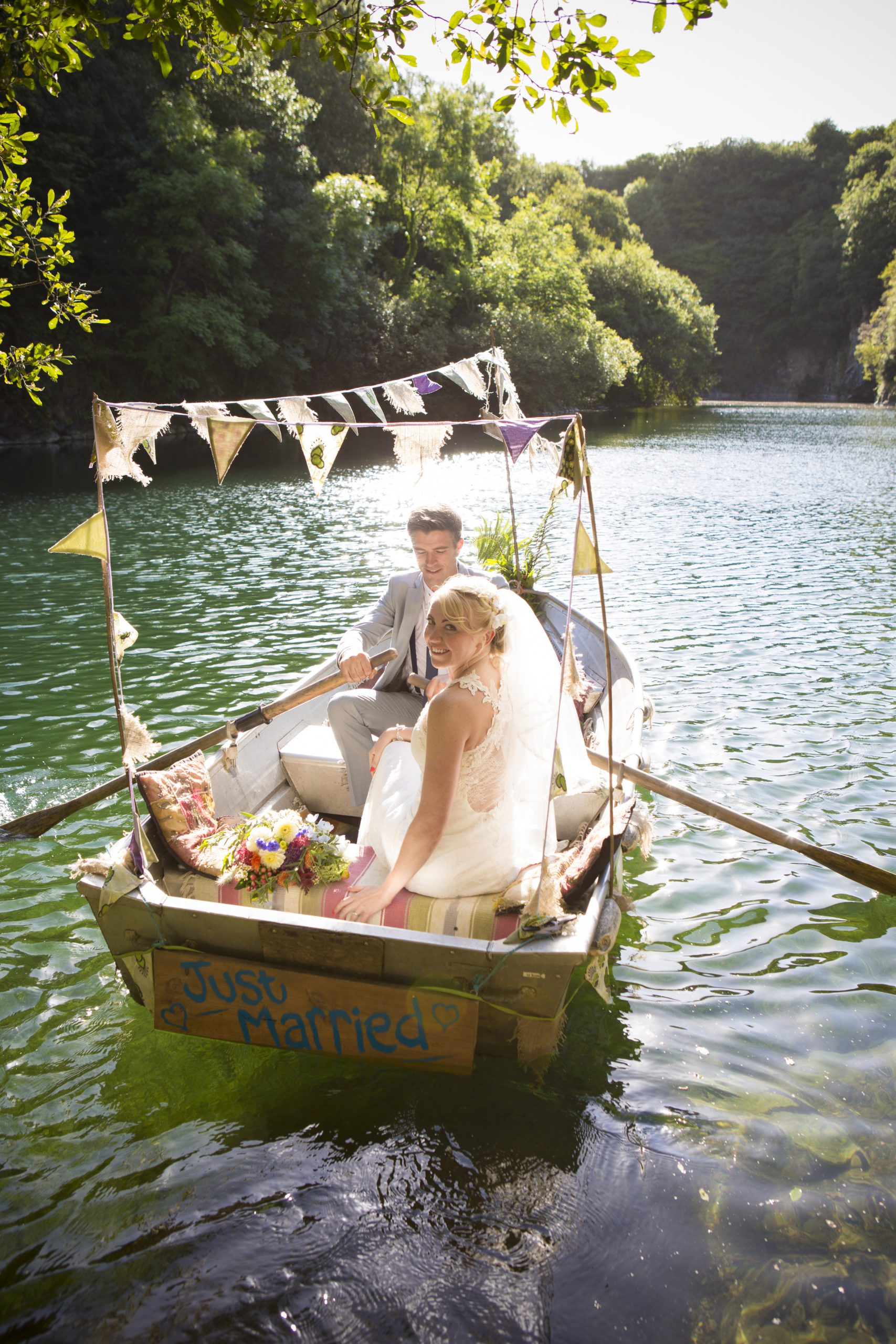 FOR… A SHORELINE CEREMONY
Shieldaig Lodge Hotel, Badachro, Nr Gairloch, Ross-shire
Couples getting married at Shieldaig Lodge can choose to hold their ceremony outdoors, if they wish, on the shores of a sea loch surrounded by the rugged beauty of the Highlands. And the hotel, which has its own falconry centre, can even arrange for an owl to swoop in and deliver the rings. Shieldaig Bay, along with its resident seals, is visible from the restaurant and most of the rooms inside the recently refurbished Victorian hunting lodge. Weddings of all sizes can be catered for here – from elopements (with an intimate ceremony held in the library or garden, accompanied by a piper) to large celebrations for up to 300 in a dedicated marquee. (01445 741333, shieldaiglodge.com/weddings). 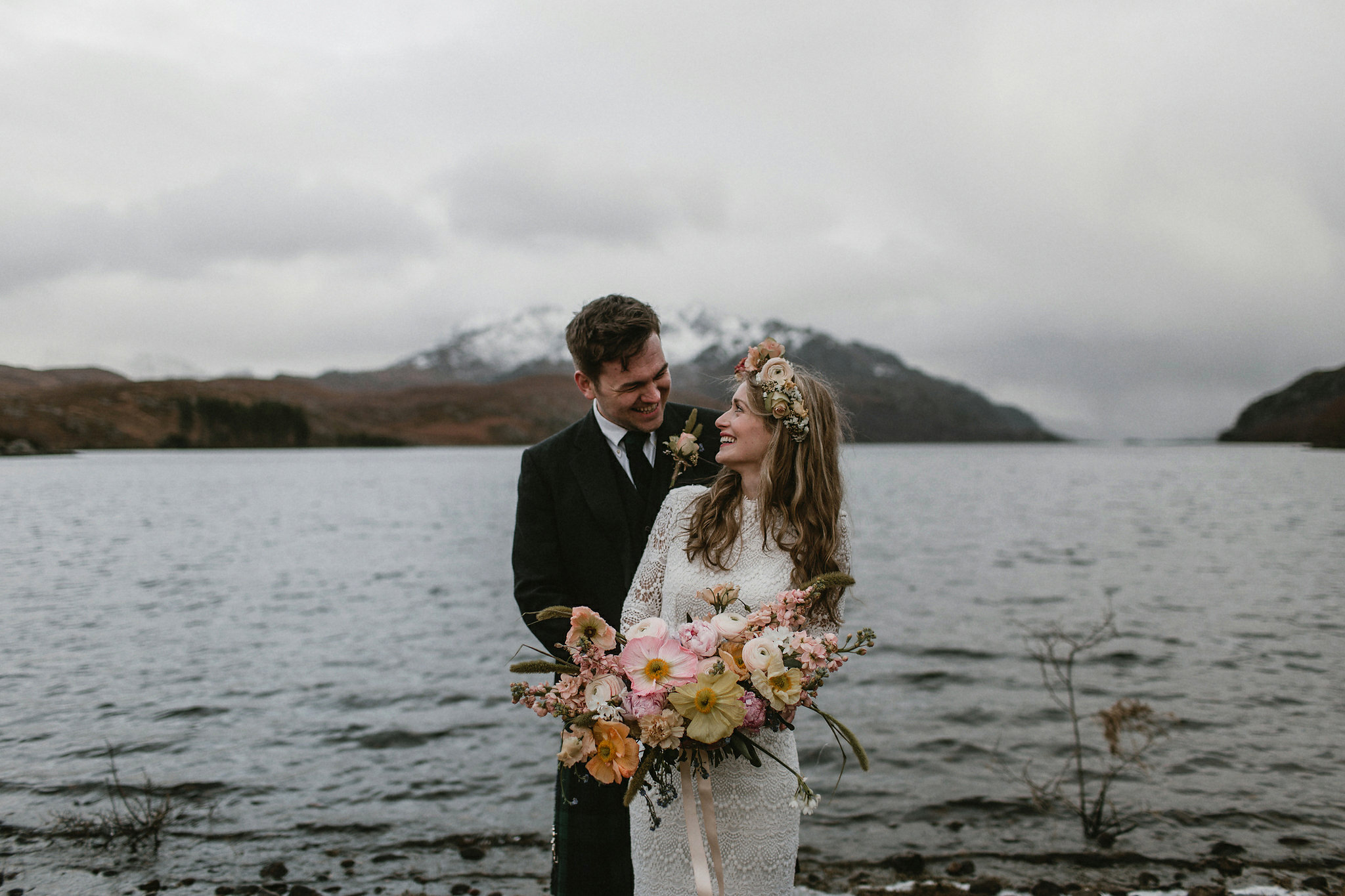 FOR… A VINTAGE WEDDING
The Midland Hotel, Morecambe, Lancashire
An Art-Deco Hotel overlooking Morecambe Bay, The Midland provides a suitably glamorous backdrop for a couple's big day. The former haunt of Coco Chanel, Laurence Olivier and Noël Coward was restored to its former glory a decade ago, and retains period features such as a grand, cantilevered spiral staircase and original works by the artist Eric Gill. What's more, the hotel's team can arrange Vintage Weddings inspired by your favourite era, such as a Twenties flapper-style theme. Or, why not base your wedding feast on the The Midland's opening menu from 1933. Locally sourced food is served in the Sun Terrace restaurant with panoramic sea views. (01524 428370, englishlakes.co.uk/the-midland/vintage-weddings). 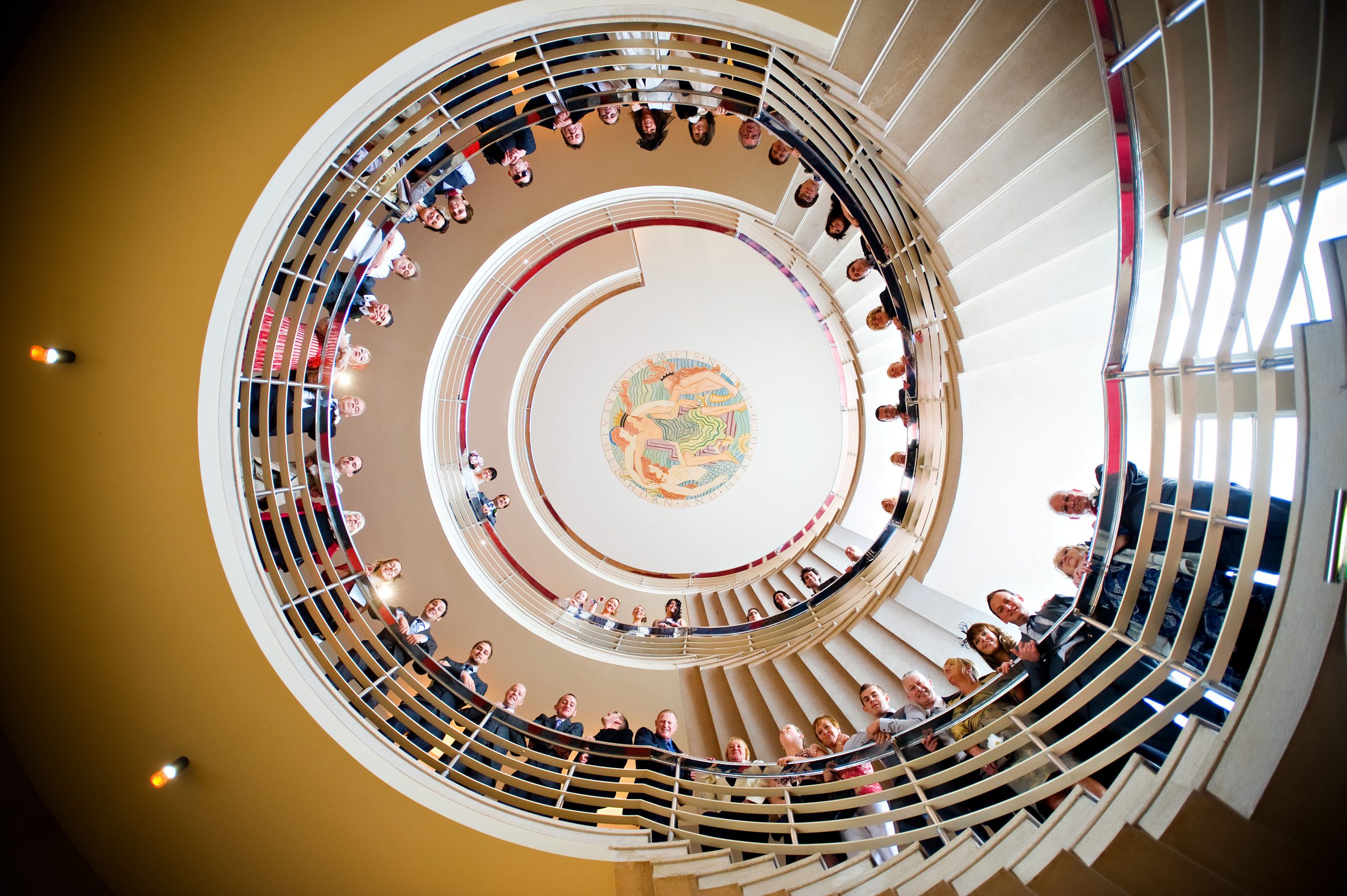 FOR… A CLIFF-TOP FOLLY
Mussenden Temple, Downhill Demesne, Coleraine, Co. Londonderry
The Mussenden Temple on the National Trust's Downhill Demesne estate is an 18th-century folly built on the edge of a cliff with views across the Inishowen Peninsula and Causeway Coast. Based on the Temple of Vesta in Italy, and originally intended to be a library, the circular building is now licensed for wedding ceremonies from March to September. A small drinks reception can also be held at the temple after the couple's vows have been said. The surrounding coastal Demesne is rich with photo opportunities, such as the gardens at Bishop's Gate and the atmospheric ruins of Downhill House. There is also the seven-mile stretch of Downhill Beach below – a filming location for Game of Thrones. (028 7084 8728, nationaltrust.org.uk/downhill-demesne-and-hezlett-house). 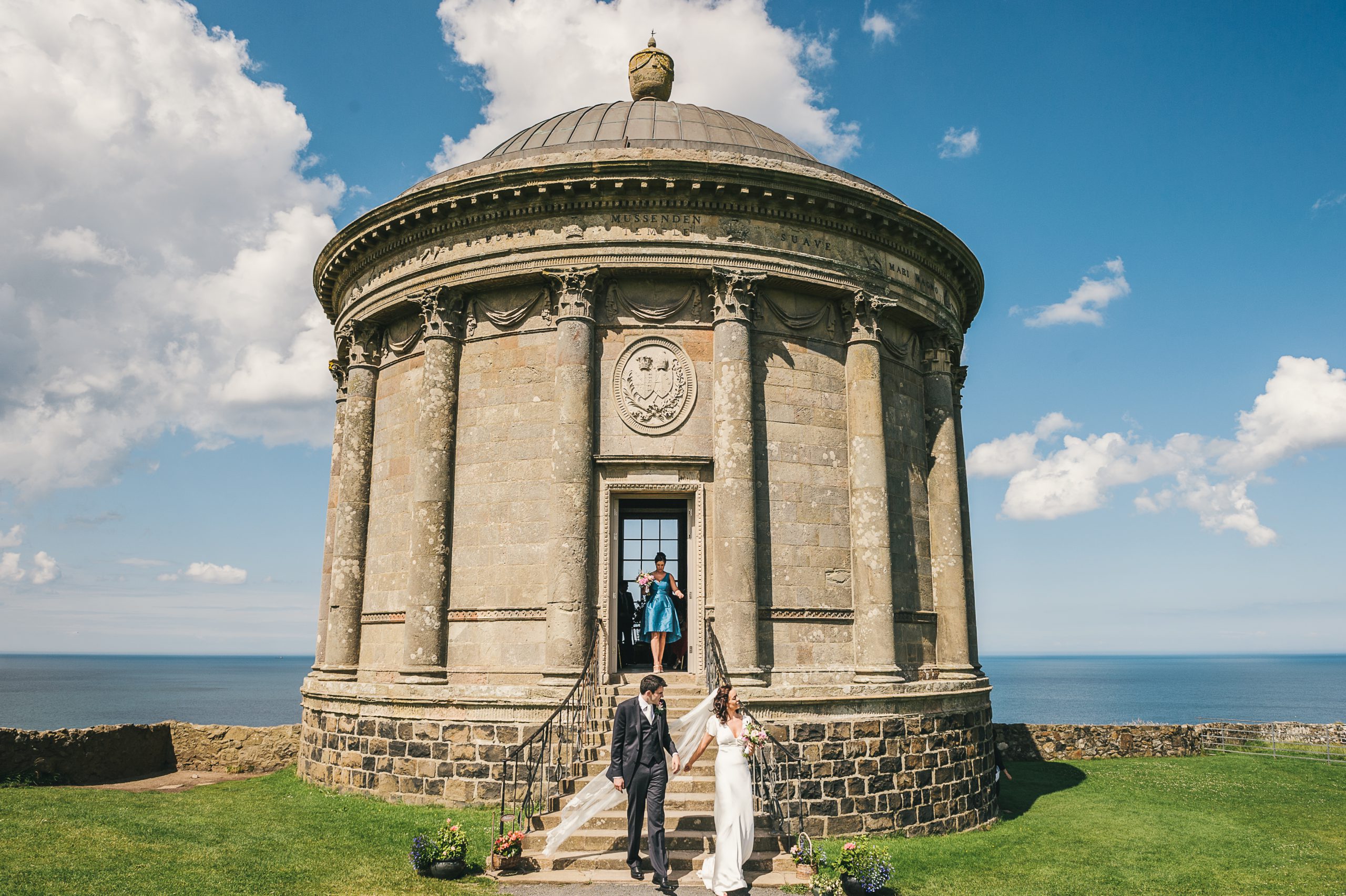 FOR… A FAIRYTALE CASTLE
Pennsylvania Castle, Isle of Portland, Dorset
This crenellated neo-gothic building – with a history dating back more than two centuries – stands on the Isle of Portland, with a front-row view of the Jurassic Coast. Now an events venue, Pennsylvania Castle can be hired in its entirety for a fairytale wedding, complete with accommodation for guests. Personalised ceremonies and feasts can be held either inside the castle or within the landscaped grounds – which are also ideal for pre-dinner cocktails and games on the lawn. Twilight Weddings are another option, which take place in the candle-lit gardens, leading onto a casual reception. As there is a helipad here, couples can fly straight to the airport for their honeymoon once the festivities are over. (01305 820918, thepenn.co.uk). 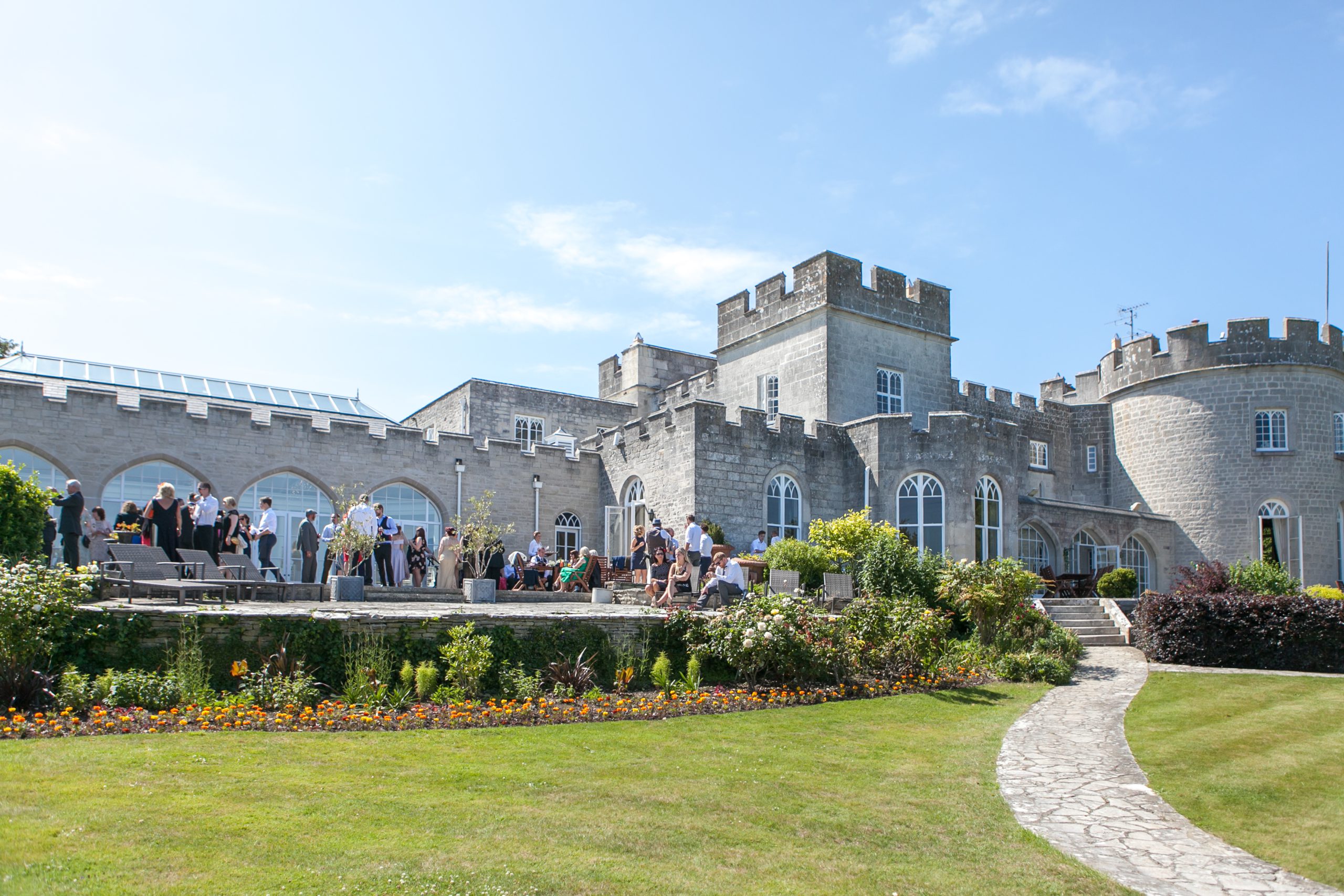 FOR… A LIGHTHOUSE
Nash Point Lighthouse, Marcross, Vale of Glamorgan
Nash Point prides itself on being the only working lighthouse in the British Isles to host wedding ceremonies in its tower, making it a unique venue for tying the knot. Built in the 1830s, it stands on the Glamorgan Heritage Coast, and is suited to small gatherings of up to 25 people. After the service, Champagne and nibbles are served while the couple have photographs taken in the lantern at the top of the lighthouse. When the fog horn is in working order, it is sounded – loudly – to mark the happy occasion. A full reception, including marquee, can be provided by the nearby Heritage Café on the headland. (07850 047721, nashpoint.co.uk/weddings/). 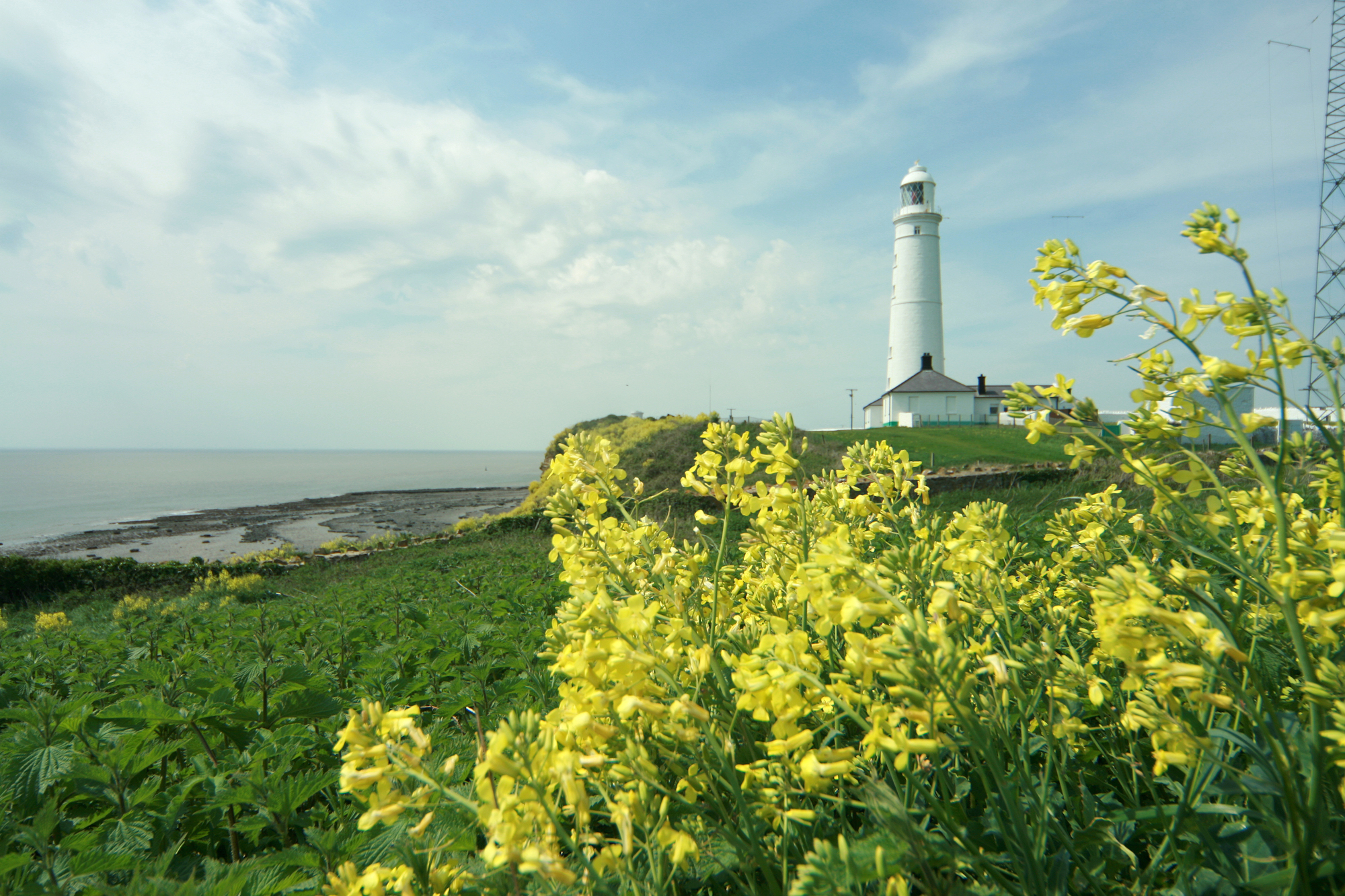 FOR… A BEACH EVENT
Tunnels Beaches, Ilfracombe, Devon
Accessed via a hand-carved tunnel through the cliffs, this show-stopping coastal venue comes complete with its own private beach. A thatched gazebo for outdoor ceremonies stands on a terrace overlooking the shore. Also on site is a timber-clad contemporary building for indoor weddings and parties. Give your event a truly coastal flavour with seafood canapés and a gourmet fish barbecue, or hire quirky add-ons, such as an ice-cream tricycle, giant deckchair and VW wedding guest shuttle. Stylish self-catering accommodation for the wedding party is available here, too, including a converted 19th-century Bath House. (tunnelsbeaches.co.uk/weddings) 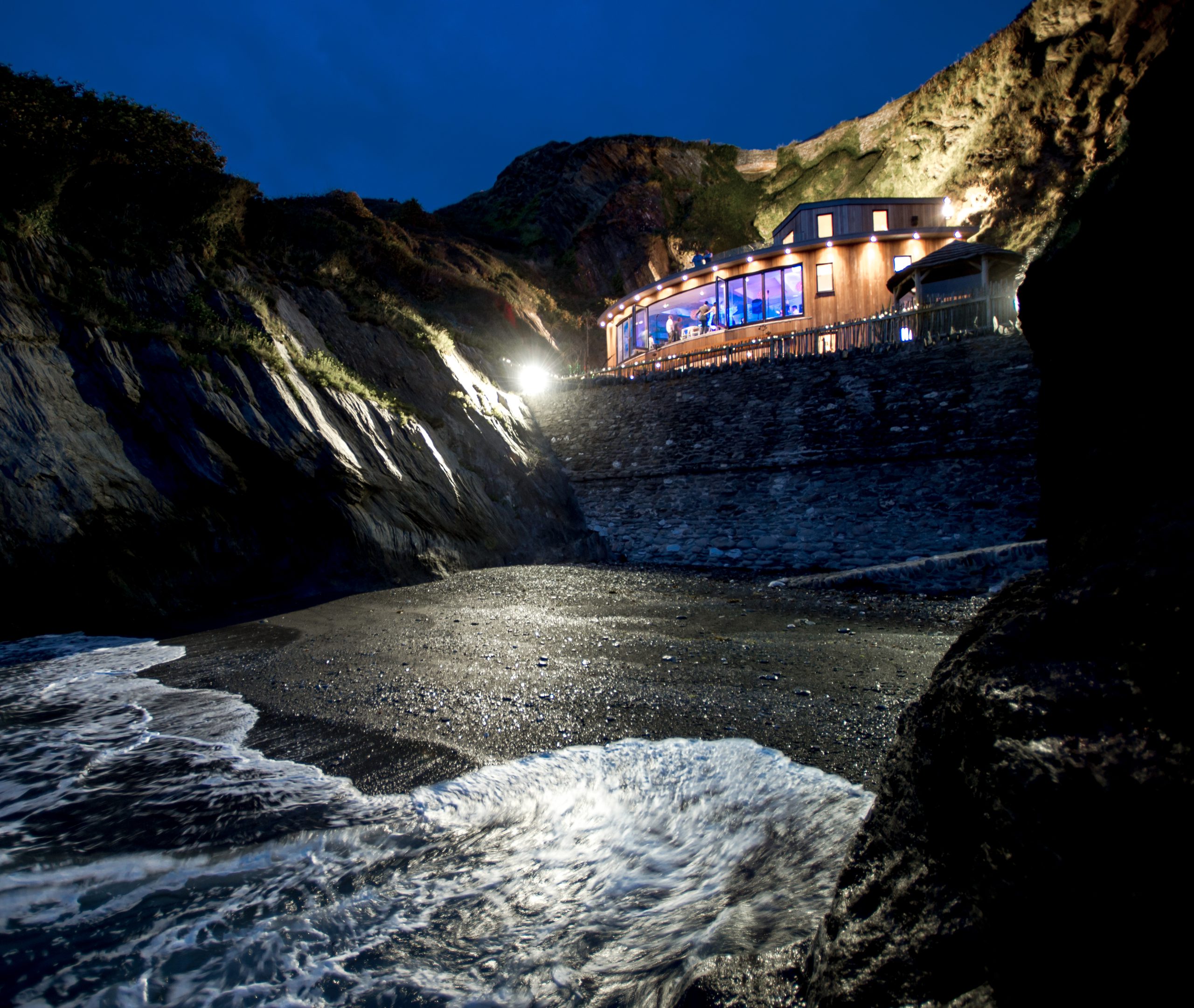 FOR… A TREEHOUSE WEDDING
Harvest Moon Holidays, Tyninghame, East Lothian
There are two wedding venues available at this photogenic treehouse glampsite on the east coast of Scotland, which can be hired exclusively for a memorable weekend. The first is at the Safari Tent site, where you can get married on a white-sand beach edged by dunes. After celebrating with family and friends in a marquee, spend the night in a romantic honeymoon tent, complete with four-poster bed. Weddings also take place at the Treehouse site, where ceremonies are held in a private pine wood. The newlyweds and their guests can then enjoy staying in the cosy, timber-built treehouses, with views out to sea and the famous Bass Rock. (harvestmoonweddings.co.uk, [email protected]) 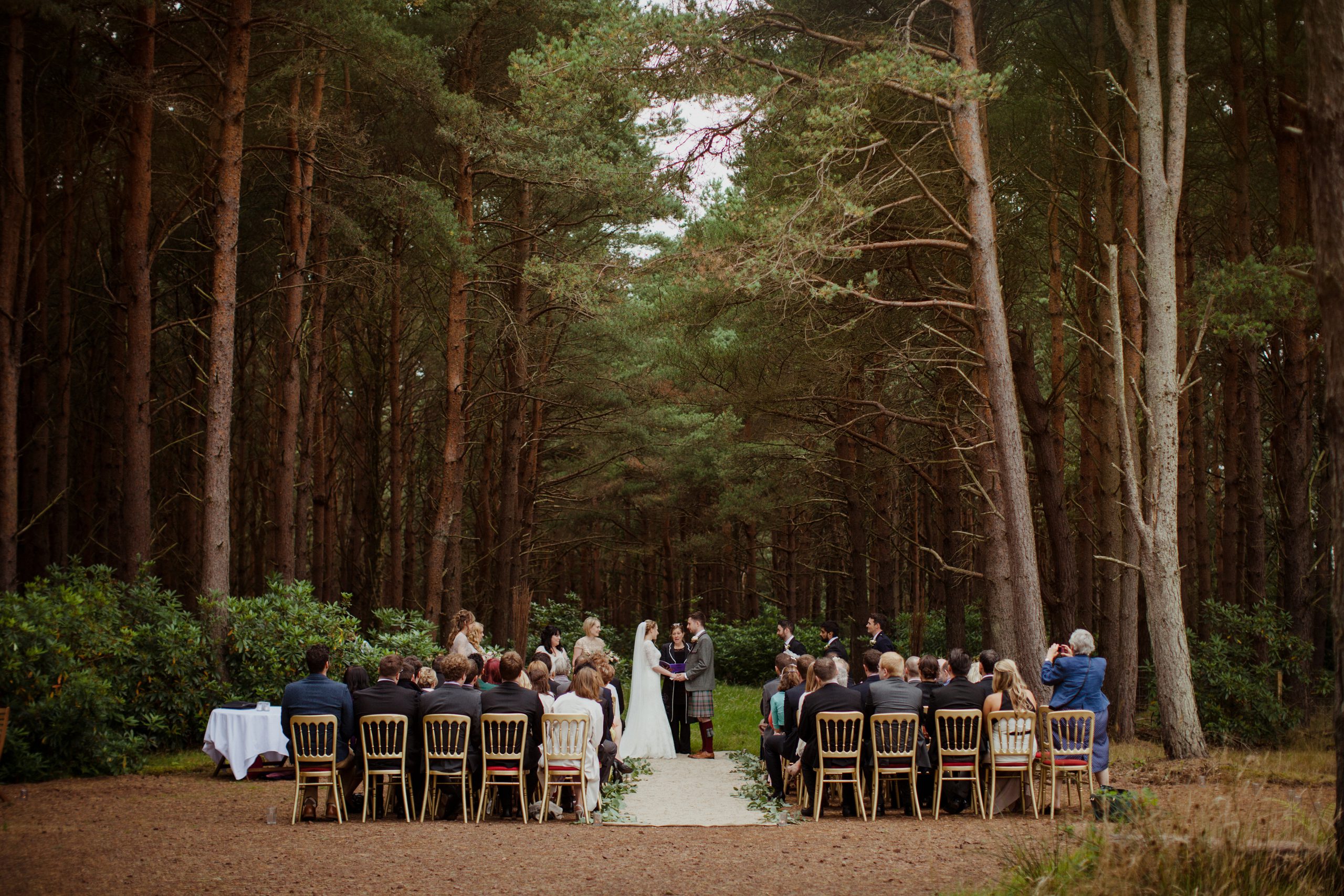