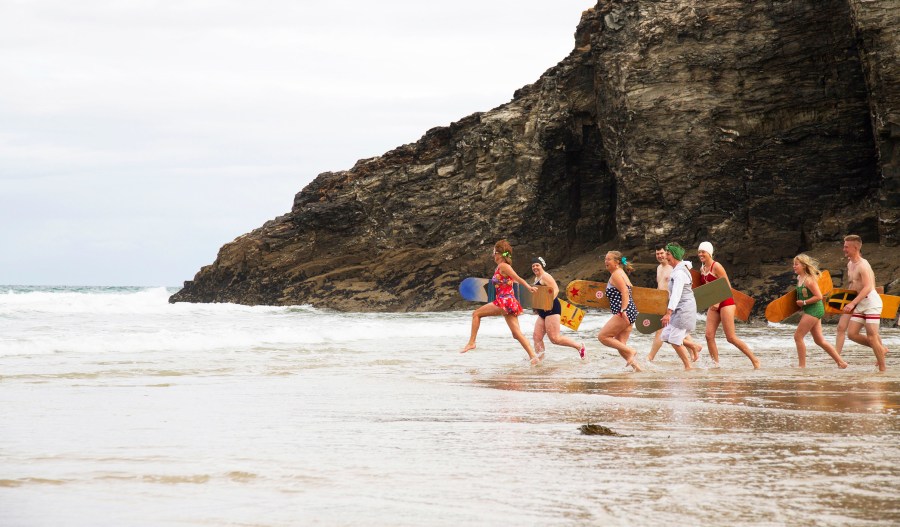 Every September, over 400 surf-riders flock to Cornwall’s Chapel Porth Beach for the World Bellyboarding Championships – to celebrate five decades of this quintessentially British tradition… and for a day of good, old-fashioned fun. Words and photographs: Mat Arney

There aren’t many sports where you can become a World Champion at the age of 60, or where there have been no advancements in equipment in more than 50 years. Bellyboarding, however, is one such activity: the joyous act of being pushed back towards the beach by a broken wave, lying down with your arms outstretched, clinging on to the upturned nose of a plywood bellyboard.

Take a look in the garage or shed of almost any old cottage or holiday home in the South West and chances are that you’ll come across a four-foot-long, one-foot-wide piece of plywood, rounded and perhaps slightly bent up at one end. It might’ve been sat there gathering cobwebs for decades, or it could still be dripping saltwater from an early morning splash in the waves.

‘I was five when I first caught a wave on a bellyboard at Porthcothan (in 1965),’ recalls Sally Parkin of the Original Surfboard Company. ‘Particularly at that beach, there weren’t any other sorts of surfboards at all back then, so everybody used them. I started my company five years ago because I loved the wooden boards but they began to break and I wondered where to get them again, and that was really the seed for the Original Surfboard Company – I didn’t want them to die out!’

HOW IT ALL BEGAN
Bellyboards are based on ancient Hawaiian designs and have been used to catch waves around the coastline of Britain since the late 1800s. This first recorded act of wave-riding was undertaken by two visiting Hawaiian Princes under the stewardship of their British tutor in September 1890 at Bridlington, East Yorkshire.

Following the First World War, the railway network allowed many British families to holiday ‘beside the seaside’, and this trend continued to grow as motor cars became more widely available. In the South West in particular, ‘surf-bathing’ in the refreshing waves of the Atlantic became a popular holiday pastime. Bathers rode the waves on boards known as ‘coffin lids’, five-foot-long boards made from planks battened together and ridden with the battens facing up against the body. The boards were called coffin lids because one of the first people to make them on a commercial scale was Perranporth undertaker Tom Tremewan, using the materials that he had to hand. Other enthusiasts made their surf-riding boards from planks of solid hardwood, such as ash or elm, before plywood began to become more readily available in the 1930s.

The baby boom following the War, combined with the high expense of foreign getaways, meant that the classic British seaside holiday enjoyed another heyday. It is this period through the late 1940s and 1950s when bellyboarding (as it is now popularly referred to) boomed and from which time many of the plywood bellyboards found today in beach huts, sheds, garages and attics originated.

BUILT TO LAST
Dick Pearce started producing ‘crest riders’ from specially selected plywood around 1960, and they were sold with various logos in beachside shops all around the British coast. Dick continued to produce his boards until his death in 2010, at which point his bellyboard business was bought by Andy Cameron of Wavehunters and moved from North Devon to North Cornwall. Andy continues to produce crest riders using exactly the same materials and processes that Dick started out using more than 50 years ago.

Gavin Randall of the Traditional Surfing Company also uses the old-fashioned method to make his bellyboards in his workshop in West Cornwall. Gavin shapes and then steam-bends marine plywood (because it is lightweight and offers the best flexibility, a characteristic that is important for maximum control in the waves), before slow-pressing the board to form the curved nose and then screen-printing his graphics on to them.

‘Every year you see people buying a piece of polystyrene with a mermaid printed on it and it snaps after 10 minutes and gets left next to the bins at the beach car park. Polystyrene in the marine environment is horrific. And yet a well looked-after bellyboard will last for 50 years or more, so your children can use it, and possibly then your children’s children, too. And if they don’t like surfing then it can be used as a shelf!’

WE ARE THE CHAMPIONS
Despite the growth of stand-up surfing on Britain’s beaches through the 1960s, the accessibility of the traditional plywood surf-riding boards meant they continued to enjoy widespread use, particularly by visiting holidaymakers such as Londoner Arthur Traveller.

Every summer, at the end of the school holidays, Arthur would visit Chapel Porth Beach on Cornwall’s Atlantic coast and, whatever the weather, he and his friends would catch waves on their wooden boards. They steadfastly refused to wear wetsuits. When Arthur passed away in 2003, the head lifeguard at Chapel Porth, Martyn Ward, wanted to pay tribute to him and, together with Chris Ryan who runs the National Trust car park, they organised the ‘Arthur Traveller Memorial Handboard Contest’.

‘About 15 of Arthur’s friends turned up and it was really sweet,’ explains Chris. ‘They wanted to do it again the following year, so I thought that just as the Isles of Scilly World Pilot Gig Rowing Championships seems to be mostly Cornish gigs with the odd Dutch one thrown in, we could name our event a World Championship, too, even though most entrants would be from Cornwall.’

Eleven years on, entrants have travelled from as far afield as Cape Town, California and New York to attend the event, with many people planning a weekend visit to Cornwall from all over the UK to coincide with the World Bellyboarding Championships.

A BRITISH INSTITUTION
In recent years the Championships has had in excess of 400 entrants and is often oversubscribed, with many competitors returning year on year.

‘There was one year where the numbers nearly doubled and cars started to become intrusive, so the next year we closed the car park for the event. I don’t think that’s ever happened before. It’s been a car park since 1957 when the Trust took over Chapel Porth. The spirit of the place hasn’t really changed in all that time, and that’s what this is a celebration of,’ explains Nick Holden of the National Trust, who organises the event.

The Championships is less of a competitive sporting event and more of a festival, with the distinct air of a village fête. The National Trust’s car park is bedecked with bunting and flags and the only vehicles present are mid-century classics, parked up along the beachfront. Under the cover of open-fronted marquees, a small handful of bellyboard producers display their wares, and refreshments are provided by Trust volunteers and the excellent Chapel Porth Beach Café. In 2013 a canvas bell tent housed a memorabilia exhibition curated by Sally Parkin of the Original Surfboard Company and photographer and bellyboard revivalist John Isaac. Amongst the items on display was a bellyboard first surfed in 1921 at Fistral Beach by George Hogg’s Auntie Doris, alongside his mother’s original diary and a photograph of the sisters riding a wave together.

It is this long tradition of quintessentially British wave-riding and shared family fun that is celebrated at the World Bellyboarding Championships. And the wonderful thing is that it is not just a nostalgia trip for the older generation, but an opportunity for young people, families and even committed local surfers to spend a day enjoying the seaside in a simple and wholly accessible manner, and in an environment where wide smiles score more points than technical flair.

THE CHAMPIONSHIPS – NEED TO KNOW
The World Bellyboarding Championships is held on Sunday 6 September at Chapel Porth Beach in Cornwall, hosted by the National Trust. It’s free to enter (although a £5 donation to the Trust is requested) and there are three categories in the ‘Men’s’ and ‘Ladies’ divisions; ‘Youngsters’ for those up to the age of 16, ‘Juniors’ for the under-60s and ‘Seniors’ for those who are eligible for a free bus pass, as well as a free-for-all ‘Expression Session’. See bellyboarding.co.uk.

The World Champion can be selected from any division and age group, and surfing is judged against the following criteria:
– Length of ride.
– Directional changes with flow, wave speed and glide.
– Innovative and progressive manoeuvres.
– Style, finesse and enjoyment.

The beach car park is closed for the event but parking is available at the top of the hill and in St Agnes village, with a complimentary park-and-ride minibus ferrying competitors and spectators to Chapel Porth Beach.

Nearby accommodation is available at The Driftwood Spars Hotel (01872 552428, driftwoodspars.co.uk), through Aspects Holidays and National Trust Holiday Cottages. For further options, see st-agnes.com/stay.

Liked this? Try learning about other coastal sports such as cliff camping, rollerblading, sea swimming, microlighting, or archery.

Bellyboarding (or ‘surf-riding’ to the purists) is the act of riding broken, white-water waves in towards the beach from about waist depth, lying prone on a plywood board. Bellyboards are traditionally four-foot-long by one-foot-wide pieces of plywood, with a semi-circular front end, which is often curved up slightly to prevent it from catching in the water.

Surfers wade out holding their boards and, upon selecting an appropriately strong line of white-water, turn to face the beach and push themselves forward off the seabed as they are about to be hit by the wave, holding their board at arm’s length in front of them with their torso resting on the rear of the board. The white-water engulfs the surfer before pushing them out in front of the wave and propelling them to the shallows.

There are a number of British companies that make and sell classic bellyboards, including the Original Surfboard Company, the Traditional Surfing Company, Dick Pierce and Friends and Paipo Glide.

Otter Wooden Surfboards also offer the opportunity to attend one of their ‘build-your-own’ workshop days where you can make your own bellyboard under expert tuition at their workshop in Cornwall.