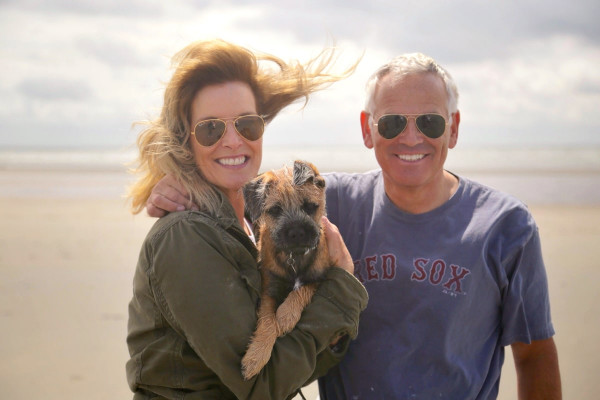 For Steven and Carol Howard, a neglected coastal pile on the tip of the West Sussex coast became the catalyst for a huge lifestyle shift for all the family, rooted in the elements. Words JESSIE JOHNSON

It’s a blue sky day in Selsey. Coffees in hand, Steven and Carol Howard pad to the end of their seaside garden where a belt of sand and shingle beach offers front row seats to the day’s ebb and flow. Such is tradition, their Border Terrier Muttley is four steps ahead playing chase and fetch with pebbles, paws skimming into the froth of an incoming tide. By the time the cups are dry, a boatful of freshly landed crab and lobster has come ashore at Selsey beach, swimmers are taking to the waves and the coastline begins to hum with the sound of dogs, walkers and nature lovers keen to glimpse the natural wonders to be found in and around the dramatic headland of Selsey Bill.

Being able to weave regular doses of sea air into a busy working day has become part and parcel of the couple’s exhilarating new life by the sea. Raising a family of three boys in London, the West Sussex coast always held a unique appeal for Steven and Carol, but it wasn’t until 2013 that they decided to plant some serious seaside roots. Steve, an avid cyclist, would regularly pedal the county’s unspoilt coastal paths and tracks and make a beeline for Selsey, a traditional fishing village which sits at the most southernmost tip of the Manhood Peninsula, eight miles south of Chichester.

PARADISE FOUND
‘Selsey became my destination, a place to stop, breathe, have a coffee and take in the most incredible coastal views,’ says Steven, who heads up The TCB Group – a family-run entertainment business which produces live touring and West End shows, as well as managing talent such as musician Lulu and the dancer and presenter, Darcey Bussell.

After weeks spent ‘pinching in and pinching out’ via online property searches to find their perfect location, the Howards came across The Lookout – a five-bed beach house as close to Selsey’s tip as is virtually possible. But when the Howards walked in to find dripping ceilings, rotten floorboards and bare wires, they knew it would be a work in progress. ‘The location was everything but the house was terribly neglected,’ explains Carol. ‘The first night we slept here, we had one of the biggest storms the country had ever witnessed. The sea was literally pounding on the glass of the bedroom windows and we had a moment of thinking “What have we done?!”.’

Despite the legwork required to get the house up to scratch, the family decided to live in the property for a full year before beginning renovations proper, swapping city for quick weekend stays at the sea. Says Steven: ‘It felt important to get to know the sea, the weather and how it affected the wear and tear on the building. By living in it we were able to get a good feel for what might be possible.’

BEACH VIBE
The results are a masterclass in DIY renovation. Leaning on the raw beauty and practicality of the coastal elements right outside the door, the Howards have crafted a bright, modern seaside home. From the start, Carol and Steven eschewed the help of designers and architects, and instead worked solely with a builder to create the foundational changes they were seeking, modelling the house around the family’s growing brood and a natural love for entertaining. ‘We’re big fans of reclaimed wood, vintage furnishings and antiques and we create a lot ourselves, too,’ says Steven. ‘It was all about bringing those natural textures and the outdoors inside, which you just can’t do in an urban dwelling. We have shells and rocks from the beach all over the place – and it just works.’

A neutral palette throughout the house lets the beautiful coastal light do its thing, enhanced by pops of pastel blues, greens and maritime stripes in the form of cushions, throws and reclaimed furniture, much of which was upcycled from salvage fairs across the country. Inside, the sea is perfectly inescapable; oversized glass vases are topped up with the day’s beach pebble finds; a gallery of shabby chic picture frames captures decades of precious family memories, while rattan baskets, rugs and lampshades lend a laid-back beachy feel to life through the lens of The Lookout.

One of the couple’s favourite spaces is the master bedroom. ‘We put big old shutters behind the bed with mirrors attached so it reflects the sea, which looks especially beautiful on sunny, turquoise blue days,’ says Carol. ‘There’s nothing better than sitting on the terrace outside, too, to watch the comings and goings on the beach.’

CLEVER ADDITION
Like many businesses hit by the pandemic, the Howards were forced to look at creative ways to keep finances steady. In early 2020 they decided to transform Steven’s ‘man cave’ – an old garage workshop in the garden – into a one-bedroom self-catering studio, adopting much of the same design aesthetics as The Lookout but on a smaller scale. Enter, The Hideout. Complete with kitchen, dining area, walk-in shower and a private garden completely separate from the main house, it’s little wonder that bookings for this chic, beachside cabin are snapped up like hot cakes. ‘Our visitors just love Selsey and the absolute naturalness of it,’ explains Carol. ‘The fact you can buy your fish from fishermen on the beach and cook it on your own barbecue under the stars is magical – then just fall asleep to the sound of the sea!’

During the past two years the Howards have made The Lookout the permanent base for their office and family home. Sons Jamie (30) and Ryan (29) may have flown the nest but the youngest son, Joe (22), has his toes happily planted in the sand of his new coastal dwelling. Each summer he works as a lifeguard at West Wittering beach and is now a keen surfer, taking his board north to East Wittering beach and Bracklesham Bay for some of the best local breaks and swells.

Over the summer, the family love nothing more than walking, cycling and kayaking around the local coast together (with salty sea dog Muttley at the helm of the boat) as well as entertaining friends, who are able to kick back by the sea and enjoy a taste of the simple life.

‘The sea has incredible powers and just recharges everything for us,’ says Steven. ‘We often say we live by the flame. In summer the flame is the fire of the barbecue cooking the latest catch, and in the winter it’s the flame of the log fire. Those two spaces are extremely special, and now we have this amazing home in which to experience both and feel connected to the elements.’

To book a stay in The Hideout visit sykescottages.co.uk. Follow all the latest happenings at The Lookout on Instagram, @lovinlifeatthelookout.

Visit our designs and interiors section for more inspiration. If you’re thinking about relocating to the coast, check out our guide to moving to the English coast, or pick up the latest copy of coast magazine for more coastal inspiration.