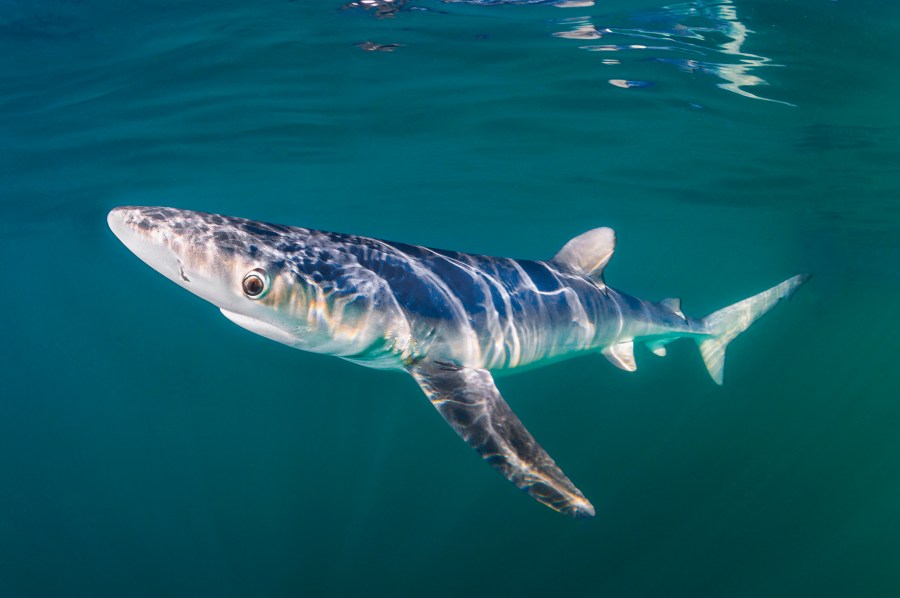 The 2015 British Wildlife Photography Awards feature some incredible images of the animals living in and around British seas. Compiled by Gabrielle Jaffe

Featuring some of the UK’s most talented photographers, the British Wildlife Photography Awards has announced the winners of this year’s competition. Among those awarded and highly commended are entries showcasing the incredible diversity of British marine life, from blue sharks photographed off Cornwall and dolphins off Wales to seals pups in Licolnshire and underwater shots of seabirds diving and competing for fish near Scotland’s Shetland Isles.
Below we preview some of our favourite images from the competition and hear from the photographers who took these incredible pictures:
BARREL JELLYFISH AND ST MICHAEL’S MOUNT BY CHARLES HOOD
(Barrel jellyfish, Rhizostoma pulmo)
Mount’s Bay, Cornwall, England
‘Last year we had thousands of these jellyfish that would float just beneath the surface on a sunny day. It was just a case of waiting until one swam into the right position.’
COMMON DOLPHIN BY MIKE SNELLE
(Common dolphin, Dephinus delphis)
Pembrokeshire, Wales
‘It was one of those perfect days off the Pembrokeshire coast, cloudless sky, no wind and sea like a mirror. Over the Celtic Deep, about 30 miles off the coast, a distant splash alerted us to the presence of a pod of dolphins. Almost at once the boat was surrounded by dozens of these playful animals; this shot reflects their beauty and harmony with their environment.’
OTTER AND THE OCTOPUS BY RICHARD SHUCKSMITH
(European otter, Lutra lutra)
Shetland Isles, Scotland
‘This female otter had three cubs and spent most of her time provisioning them. It must have been a particularly good year for octopus, as most days she seemed to capture three or four that she would give to her cubs. The cubs would spend their time wrestling the octopus and eating the tentacles first, often leaving the body for mum to eat on her return.’
BIRD’S EYE VIEW BY BRYDON THOMASON
(Northern gannet, Morus bassanus)
Unst, Shetland Isles, Scotland
‘Gale-force westerly winds offer many exciting opportunities with gannets over the colonies of Hermaness. With birds performing in the updrafts from the top of the cliffs right down to the sea below, you can appreciate a sense of scale, which is what this isolated bird offered.’
DIVING PUFFIN BY MATT DOGGETT
(Atlantic puffin, Fratercula arctica)
North Rona, Scotland
‘North Rona is a tiny island 50 miles northwest of Cape Wrath and home to many seabirds and spectacular marine life. On land puffins are often quite approachable but when on the water they seem very shy. I swam up to some rafting puffins with a stick-on puffin on my head as a cunning disguise. Even then it was hard work and after some three to four hours of trying only a few images turned out to be any good.’
BEAUTIFUL BLUE BY PAUL COLLEY
(Blue shark, Prionace glauca)
English Channel south of Penzance, Cornwall, England
‘This shark approached our small boat one hour after we laid a fish scent trail in the water. I slipped into the cold English Channel water wearing a wetsuit, mask and snorkel. The shark was curious and made close approaches, occasionally bumping me or the camera with its nose in order to sense what I was. I captured this image just prior to the shark nudging the camera.’
COMPETITION BY RICHARD SHUCKSMITH
(Northern gannet, Morus bassanus)
Shetland Isles, Scotland
‘Often two birds will grab the same fish and for a split second they try to take the fish from each other. However, as soon as they hit the surface one lets go and other gets the fish and swallows quickly. Trying to capture a split-level shot of diving gannets is challenging. There was a bit of guess work, as I found it easier not to look through the viewfinder but watch the scene before me and aim to fire the shutter as the gannet hit the water.’
COMMON SEAL PUP IN A SANDSTORM BY DANNY GREEN
(Common seal, Halichoerus grypus)
Lincolnshire, England
‘This image was taken along the Lincolnshire coast. Common seal pups are born during the summer months and by autumn they are on their own. This is a critical time for them. The wind was strong on the day I took this image and I like how it was blowing the sand along the dunes. I think it created a wonderful sense of the harsh environment that this little fellow will have to survive in over its first winter.’
All these images and more feature in beautiful coffee table book with a foreward from conservationist Mark Carwardine, British Wildlife Photography Awards: Collection 6 (AA Publishing, £25), out now.
Fancy having a go at photographing wildlife yourself? See our feature on the best wildlife experiences in the UK.