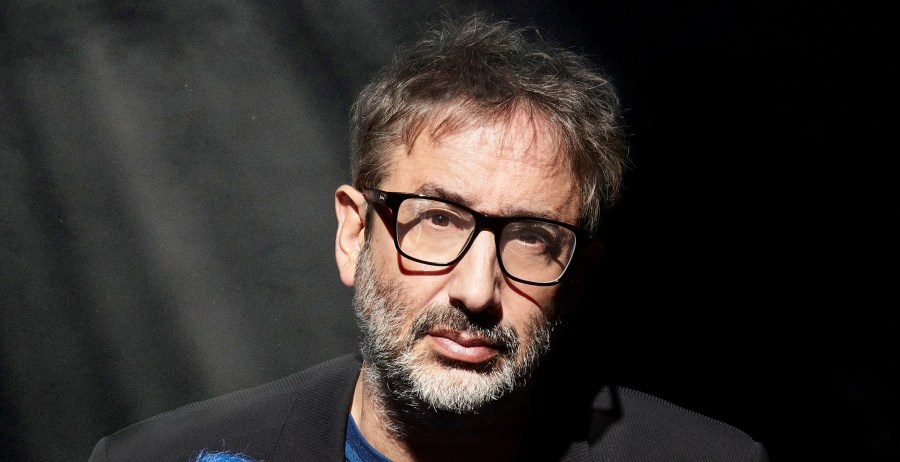 Comedian and author David Baddiel describes his family’s connection with Cornwall and The Lizard Peninsula, where they have a home by the sea. Words: Alex Reece

Cornwall is where I spend most of my coastal time, although it is my wife who is from there. I started going because I began seeing Morwenna Banks (who is my now wife), about 20 years ago and she took me to Flushing, which is opposite Falmouth. I’ve always found it extremely beautiful, and I very much associate it with starting to get into what is probably the defining relationship of my life.

We now have a house in Coverack. My wife had visited it growing up, and we’d gone there, actually, when we were just driving around. It’s on The Lizard and South Cornwall is, I think, slightly less commercialised. It’s wilder and in some of the villages, like Coverack, there’s only a couple of shops or one pub, so you’re not overrun with tourists.

I mainly like just sitting, looking at the sea. But we do walk there – there’s a sculpture garden in Coverack up on the cliffs – and there are loads of coastal path walks. I have occasionally done some more exciting things: I’ve done paddleboarding and I’ve scuba-dived. There’s a charity Christmas Day swim in Coverack and I’ve done that every year.

We drive around quite a lot and try to find out-of-the-way places to go to. My children are 15 and 18 now, and it can be quite difficult to get them to want to do things that just involve beauty. There’s a pub in Coverack called The Paris and they have nice food there. They also have pub quizzes, which we occasionally join in with.

Wherever I am, I write, so some of the material for my new show, ‘Trolls: Not The Dolls’, will have been written in Cornwall. This one is about social media. I’ve been on Twitter for ten years and what I do is look at that time, using things I’ve said on Twitter, and the way that some of those have provoked very extraordinary reactions.

I quite like working with a view of the sea, which you can do from our house in Coverack. I find the sea, in general, is an unbelievably Zen thing to have around. It makes you feel calm and it’s very good for washing away all sorts of other things you might be thinking about.

See David Baddiel in his new one-man show ‘Trolls: Not The Dolls’ as part of a 52-date UK tour with upcoming shows at Theatre Royal, Brighton on 22 March; Shanklin Theatre, Isle of Wight on 16 April; and Babbacombe Theatre, Torquay on 17 April. For further dates, visit davidbaddiel.com.