‘Waves are my inspiration,’ says sculptor Rebecca Newnham, as she looks out to sea. ‘I constantly watch the way the tide ebbs and flows, what happens when it turns on itself and one tide meets another, the choppy and calm patterns this creates. The sea, this place, is not just where I come for peace and quiet or family time, it’s also a source of creative ideas.’

Rebecca started her career in London after graduating from the Royal College of Art in 1991. She worked with internationally renowned sculptor and artist Eduardo Paolozzi and initially became known for her glass mosaic structures inspired by natural forms. Her husband David Bird began photographing her sculptures in the landscapes from which they had evolved, adding another dimension to her work. ‘Rebecca was working on a lot of private commissions,’ explains David, ‘so she’d create these beautiful things, and then they’d disappear. I wanted to record and capture their beauty in the perfect environment before they went.’

A PERFECT PARTNERSHIP
‘We’re a great team,’ says Rebecca. ‘We have developed a fantastic creative collaboration. I strive to make the best thing I can, the perfect solution for the client, and David wants to take the most desirable image possible, always taking what I have created to another level.’

Although they loved their busy London life, when they began to plan a family they knew it was time to follow their dream to live closer to the sea. ‘We had certain limitations, I exhibited in London, so we had to have good transport links. We also needed a large shed, which I could turn into a studio. We began looking in Dorset as David had studied photography in Bournemouth and we were both naturally drawn back to this area.

‘Our requirements were quite unusual,' David explains, 'not many people are looking for a home where a 40-tonne truck can pull over and deliver a sculpture. Our first house by the sea was a tiny two-bedroom house, but it had a dilapidated barn that the estate agent suggested we knock down, not realising that it was the barn we were after.’

THE WAVE
The rural setting and proximity to the sea allowed Rebecca to immerse herself in the natural world that inspires her, from bamboo and water lilies to botanical life cycles and photosynthesis. In nearby Mudeford Bay they were able to test out one of Rebecca’s sea inspired creations in the water at Mudeford spit.  Commissioned by Peter Roberts of The Himalayan Gardens & Sculpture Park in Yorkshire, the Wave is a 15-metre long floating installation. Concealed weights below the water move the sculpture into different shapes and curves as the wind and tide changes. ‘It was great to try it out on the very waters where it was conceived,’ says David. ‘We were all in our wetsuits and the local community came out to support us, offering to carry things in wheelbarrows whilst local journalists tried to interview us when we were partially submerged.’ 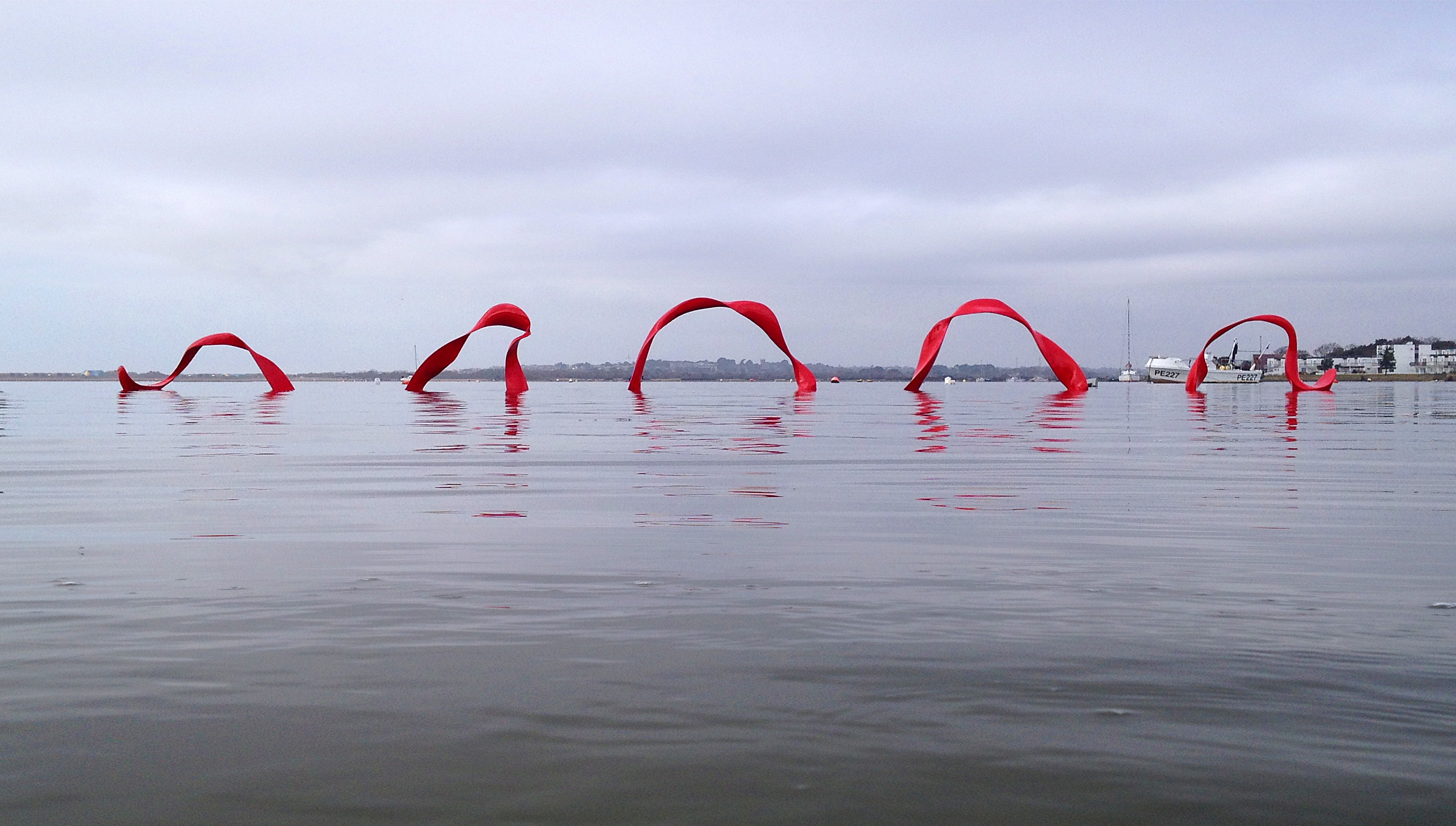 David has also photographed Rebecca’s sculptures on nearby Hengistbury Head and on the Mudeford sandy spit. ‘Once,’ he says, ‘I missed the last ferry back to the mainland and had to row Rebecca’s precious sculpture home in a kayak – it was needed for an exhibition and I couldn’t wait until the following day. I’m happy to say it arrived safely.’

When Rebecca was commissioned to create a series of sculptures for Salisbury Cathedral, it was the sights and sounds of the coast that provided her with initial ideas. ‘There are always a lot of swans in Mudeford Bay, sometimes hundreds. I became mesmerised watching them landing and preparing for take-off. Flight, and the motion of wings felt like the perfect theme for art within a cathedral and I created four pieces collectively titled Fledge; Increments of Flight. The group of four-winged sculptures describe a liminal journey, a snap shot of the stages of flight. They rotate on concealed bearings, responding to touch or the wind. ‘Everything in the cathedral is so still. I loved the idea of creating something that moved.’

NATURE’S FINEST
Rebecca’s relationship to the sea isn’t just an inspirational one, it also has some practical benefits for her work. ‘I often build things from fibreglass, and there are some really talented boat-builders around Christchurch, such as Sunseeker, who help me with my projects. Their hulls are really well made, real expertise goes into their construction and I often work closely with them when I’m trying to solve structural problems.’ 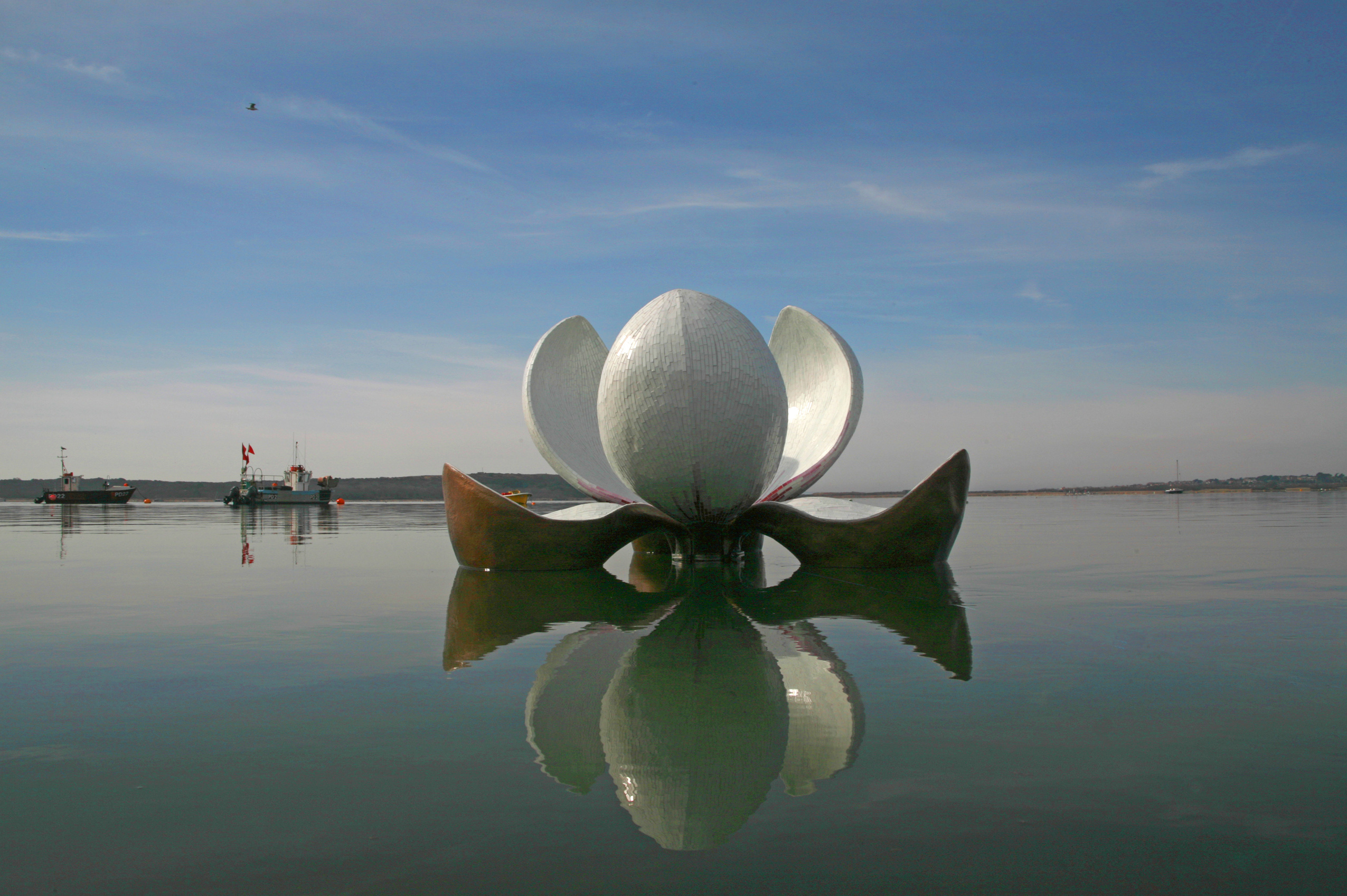 Currently, Rebecca is thinking about designs inspired by the wakes of water created by the boats that potter around Christchurch Harbour, the shapes made by splashes above and below the water line and the unusual behaviour of bubbles. ‘I want to create work that makes people smile,’ she says. ‘I am not an artist who wants to draw attention to the bad things. It’s a personal response to life, down to the mystery of the way matter moves and the miraculous intelligence within nature. I want to make people feel better about the world. It’s an amazing place to be.’

To read about more coastal inspired artists, try this feature on Anthony Garratt