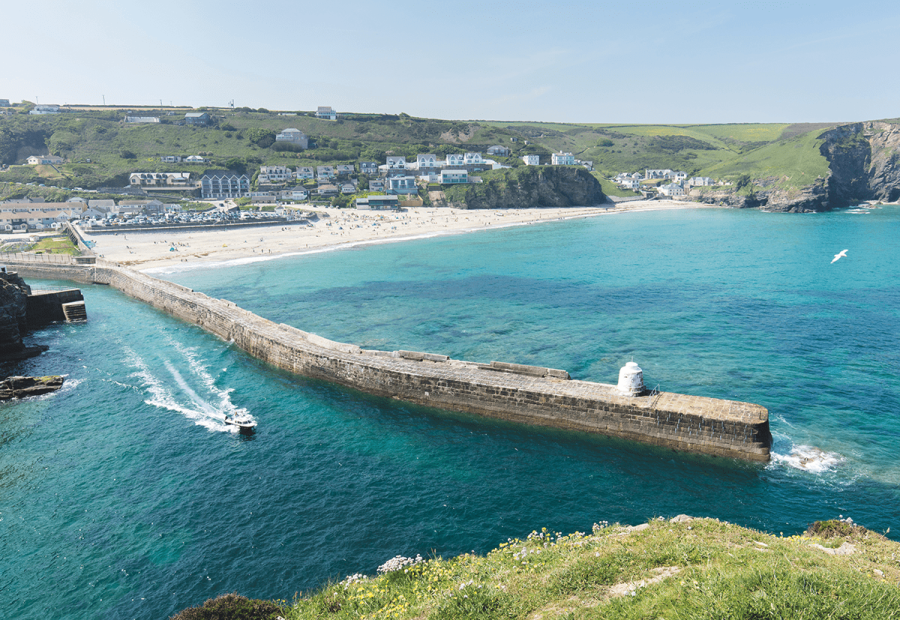 If you dream of living a more relaxed lifestyle on the coast and fear you’ll never be able to afford it, give the holiday hotspots a miss – here’s how to make your dream come true without spending millions

With the recent rush to buy a forever home by the sea, Cornwall has seen a meteoric rise in property values over the last two years (nearly 25% in some areas). According to Rightmove, Cornwall replaced London as the nation’s most searched-for destination. The market, it says, has been ‘hectic and competitive’ with hotspots like Rock, St Mawes, Padstow and St Ives regularly clocking up millionaire prices. But if you’re a buyer on a budget looking to relocate, don’t give up on your Cornish dream. Pockets of the coast offer lower prices, and you’ll get more house for your money than you would in many UK cities. 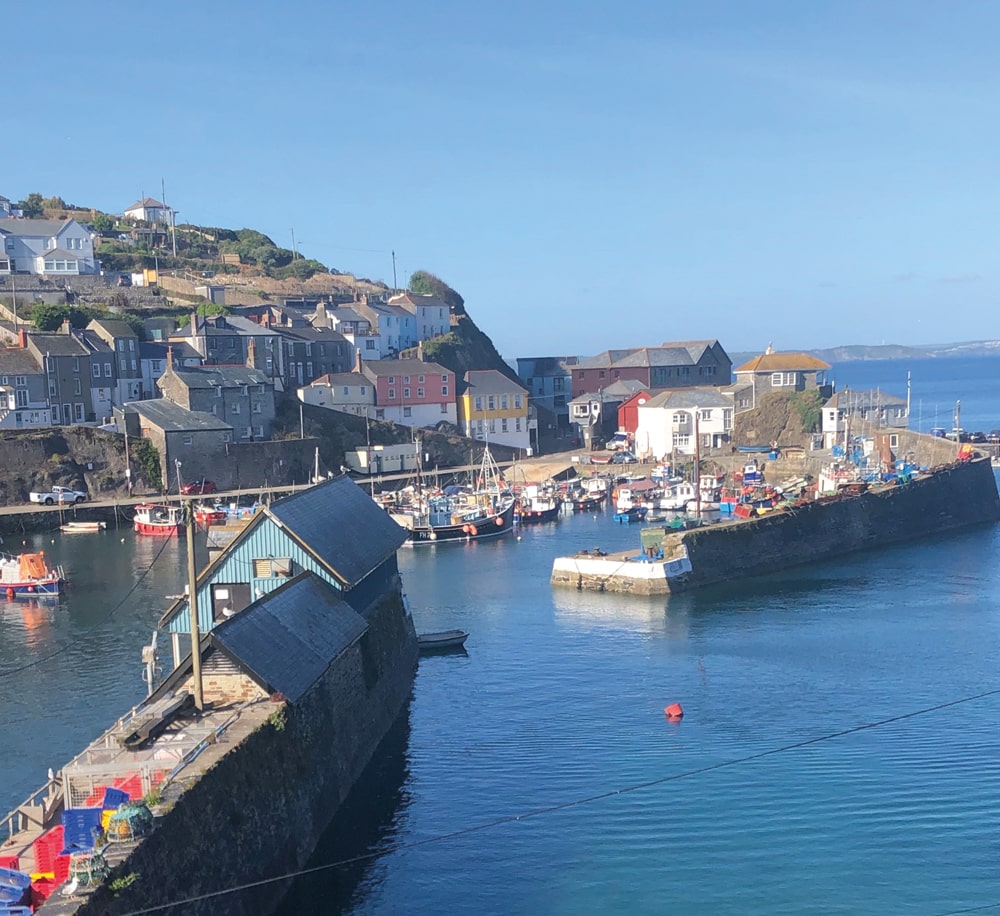 Cornwall’s classic fishing villages (Fowey, St Ives, Padstow) tend to attract the highest prices, but Mevagissey remains relatively affordable – despite being so close to the Lost Gardens of Heligan and lovely sand-and-shingle Polstreath beach. Pilchard fisheries and boat-building have largely been eclipsed by tourism but the harbour is home to the second largest fishing fleet in Cornwall, and ‘Meva’ is known for its strong community spirit (villagers recently voted for a ban on building second homes). There is a thriving high street and a mainline railway station at St Austell (a 15-minute drive).
Average price: £341,660. A three-bedroom live-work property with shop premises recently sold for £275,000.
Where to stay while you hunt: Charming Corner Cottage is a pretty, two-bedroom bolthole in a quiet lane, from £305 for a two-night break (07782 485842, cornercottagemevagissey.co.uk).

2 ON THE MONEY
Newquay, Atlantic Coast

During last year’s summer boom, Newquay emerged as the UK’s hottest property micro-market, but although the surfy Atlantic coast town saw some record-breaking sales, it’s generally less expensive than most of its neighbours. And aside from seven magnificent sandy beaches, world-class waves and a quaint fishing harbour, it boasts two good secondary schools, Cornwall College Newquay and the county’s airport. Some of the lowest-priced properties can be found at the Duchy of Cornwall’s Nansledan – an ‘urban extension’ of pretty pastel-coloured homes, with a new high street and a primary school.
Average price: £324,771. A five-bed terraced house with sea views recently sold for £325,000.
Estate agent: Newquay Property Centre (01637 875161, newquaypropertycentre.co.uk).
Where to stay while you hunt: With lush rooms and a stylish restaurant, the Lewinnick Lodge hotel sits on a headland overlooking the Atlantic Ocean. From £180 per night (01637 878117, lewinnicklodge.co.uk). 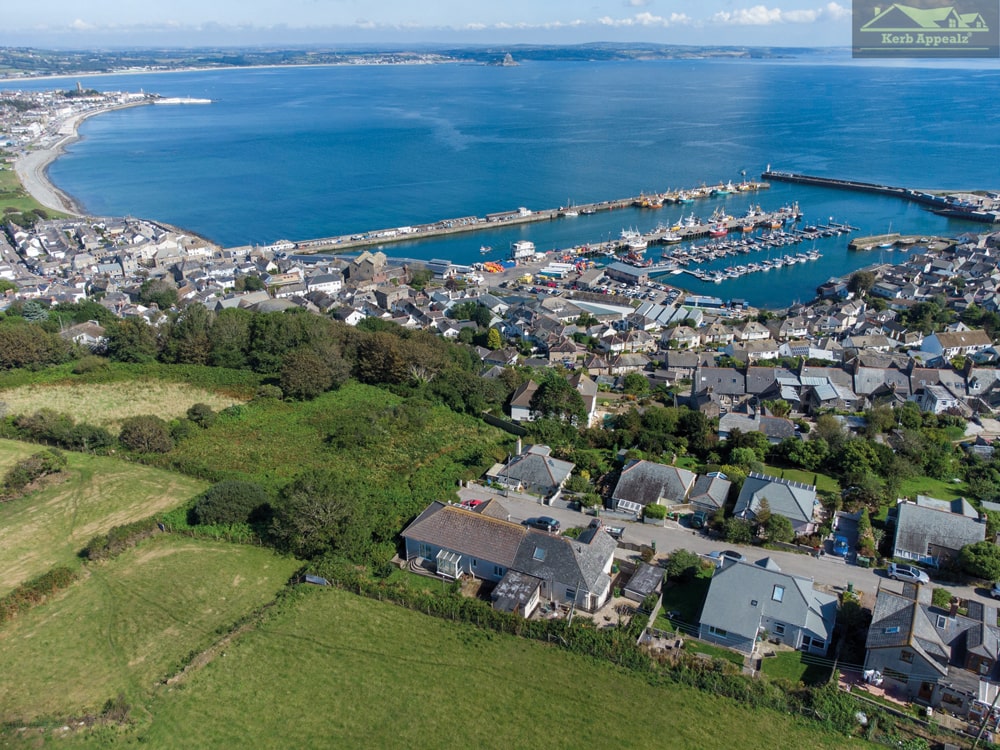 The country’s premier fishing port is a salt-of-the-earth sort of place. Property values have picked up recently (an effect of rocketing prices in nearby Mousehole) but it’s still one of the cheapest places to buy a house with a view – many of the streets which slope down to the harbour take in Mount’s Bay and St Michael’s Mount. Other attractions include Newlyn Art Gallery (and school of art), chef Ben Tunnicliffe’s gastro pub, the Tolcarne Inn, the beaches at Lamorna and Porthcurno and bustling Penzance on the doorstep.
Average price: £267,874. A two-bed cottage with spectacular harbour views  is on offer at £200,000.
Estate agent: Kerb Appealz (01736 332076, kerbappealz.co.uk).
Where to stay while you hunt: Artist Residence in Penzance is a funky, boho revamp of a Georgian townhouse on arty Chapel Street. Doubles from £149 (01736 365664, artistresidence.co.uk).

4 UP AND COMING
Penryn, Fal Estuary 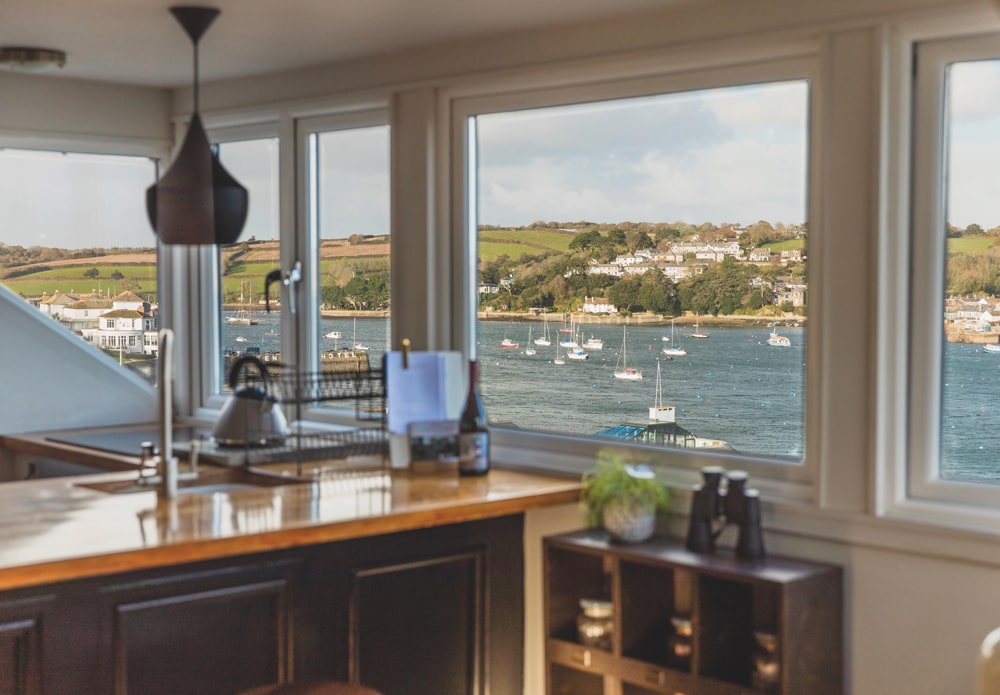 This ancient granite port is so close to Falmouth you can walk there – but there is a significant difference in price between the two towns (on average, Penryn is around £100,000 cheaper). From its waterfront boatyards, head uphill to the high street to discover a tight-knit community of mostly Georgian houses, a clock tower and independent shops (think galleries, vintage and potential). Home to the University of Exeter’s Penryn campus and ripe for town-centre regeneration, it can only be a matter of time before prices start to rise.
Average house price: £275,731. Two-bed cottages sell for around £230,000.
Estate agent: Miller Countrywide (01326 460024, millercountrywide.co.uk).
Where to stay while you hunt: On the Penryn side of Falmouth, the Star & Garter (right) offers three stunning waterside apartments. From £100 a night (01326 761441, starandgarterfalmouth.co.uk). 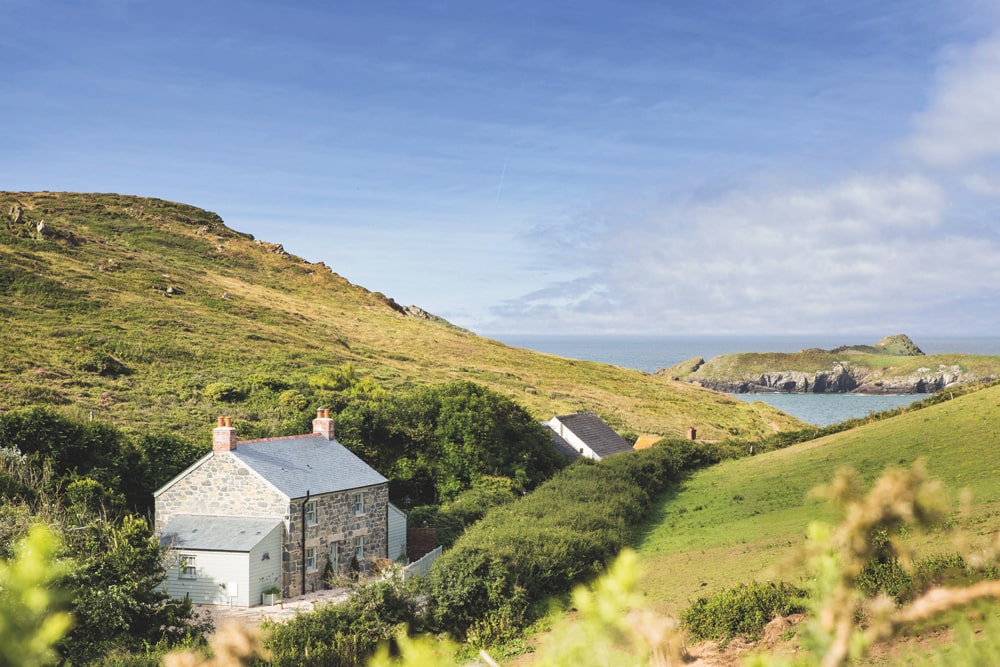 This achingly pretty village on the west coast of the south Cornwall peninsula has its fair share of millionaire properties, however prices are a shade below average for the Lizard and, for family buyers with an eye on education, it might be worth pushing the boat out. Mullion School (for 11-16-year-olds) is deemed Outstanding by Ofsted, while the Community College in Helston (the nearest town) is rated Good. Plus, you get two villages in one: Mullion and the National Trust’s craggy little harbour at Mullion Cove are less than a mile apart.
Average price: £339,843. A five-bedroom detached home recently sold for £555,000.
Estate agent: Bradleys (01326 564321, bradleys-estate-agents.co.uk).
Where to stay while you hunt: A stylish three-bedroom cottage-by-the-sea, Mill Cottage at Mullion Cove is offered by Cornish Gems, from £1,459 per week (01872 218150, cornishgems.com). 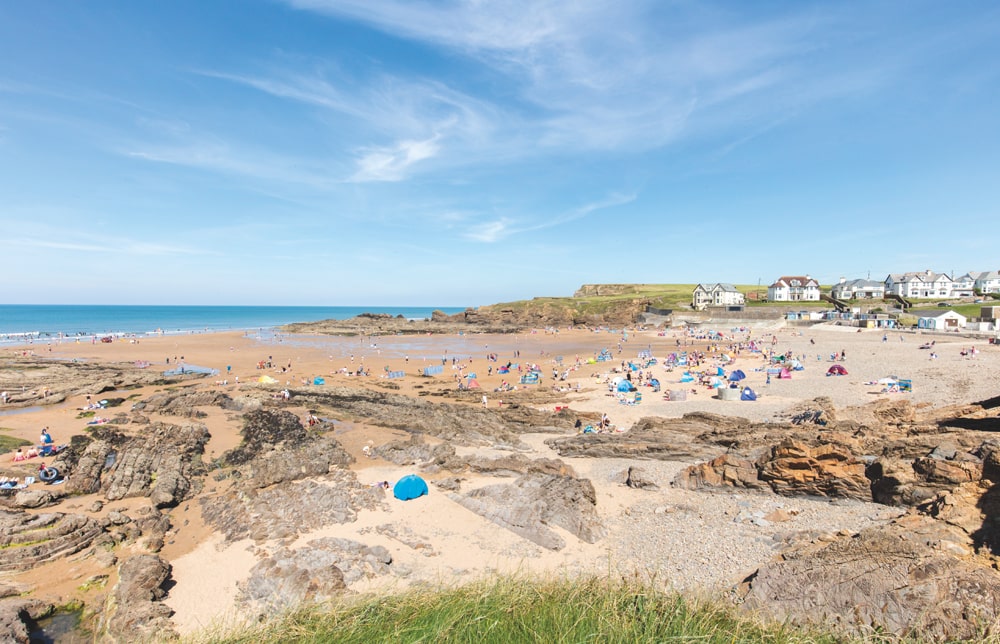 In spirit, Bude is rather like Newquay – and it certainly has its fair share of epic beaches – though it’s a little harder to get to, the demographic is a little older and the pace of life is a tad slower. But that’s part of the appeal: Bude has the air of a proper old-fashioned town (a cinema, a department store, seawater pools and canal-side walks). Only four miles from the Devon border, it also has access to some of the most spectacular scenery on Cornwall’s Atlantic coast. Prices are on the rise, but there is still scope to buy a home on a budget especially in the town’s village suburbs (Stratton or Poughill).
Average price: £353,501. Three-bedroom houses start at around £240,000.
Estate agent: Kivells (01288 359999, kivells.com).
Where to stay while you hunt: The Beach at Bude, a boutique hotel overlooking Summerleaze Beach with rooms from £125 (01288 389800, thebeachatbude.co.uk). 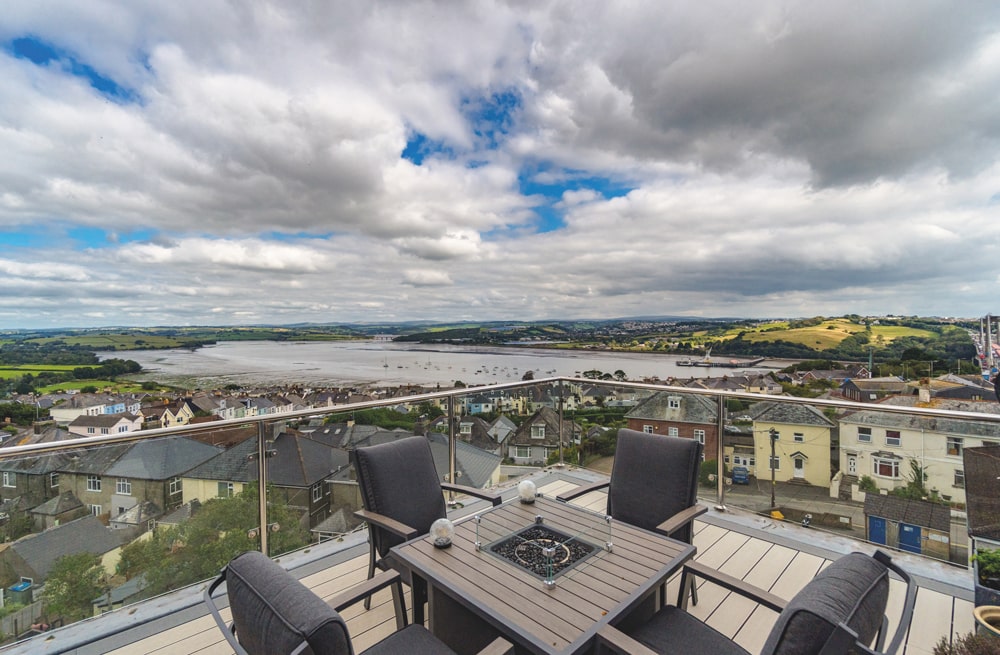 Set between the seaside and the city, this little-known Cornish-border town offers a best-of-both-worlds scenario. On the banks of the Tamar Estuary, where the iconic rail and road bridges cross the river into Devon, it’s just a hop into Plymouth or a short drive to the beaches at Cornwall’s Whitsand Bay. On hilly streets that slip down to the waterfront (sailing is a big thing here), many of the houses look across the estuary towards Plymouth Sound. The town’s railway station is on the mainline Paddington to Penzance route and house prices are well below the Cornish average.
Average price: £277,744. A three-bed penthouse apartment was recently offered at £375,000.
Estate agent: Martin & Co (01752 255255, martinco.com).
Where to stay while you hunt: At nearby St Germans (six minutes by train), Railholiday offers a choice of restored vintage railway carriages for self-catering, family breaks from £420 (01503 230783, railholiday.co.uk). 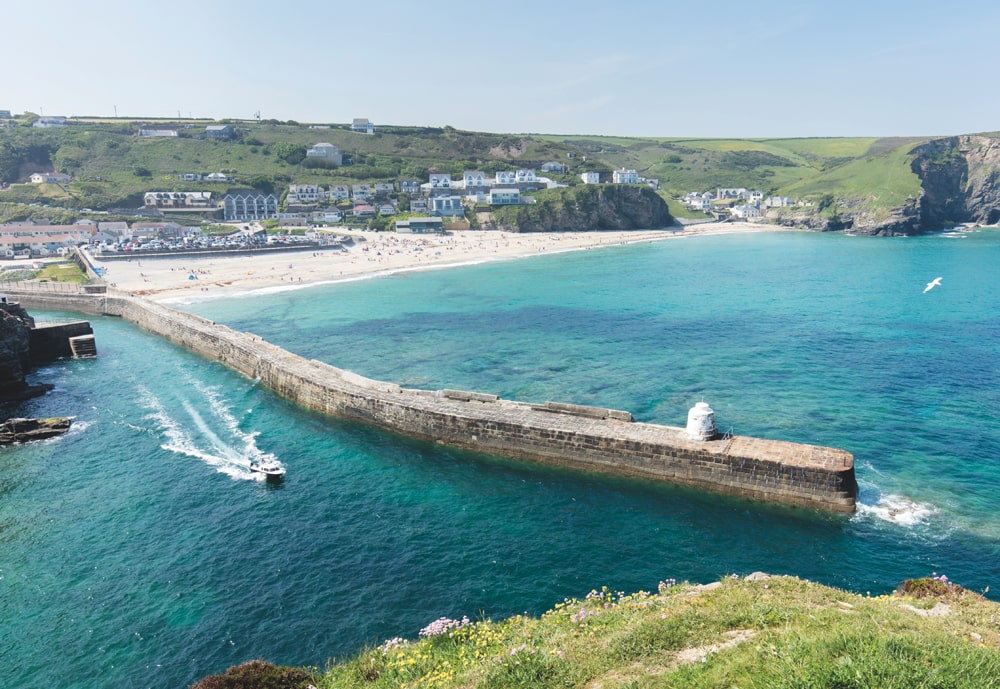 Portreath was once an industrial port serving the copper mines around Camborne; now the harbour wall makes a handy beach break for serious surfers, the old mineral tram-line has been turned into a cycle path, and its glorious sandy beaches are popular with families. Prices have risen sharply over the last year, but it’s still cheaper than, say, Polzeath. With three pubs and a handful of shops, Portreath has good local facilities and, for commuters, it’s only three miles from the mainline train station at Redruth, or a 30-minute drive to Truro – for County Council offices and Cornwall’s only city hospital.
Average price: £300,612.
Where to stay while you hunt: The Copper House eco B&B has two luxury rooms in a new-build house, from £120 a night (01209 843283, copperhouseportreath.co.uk). 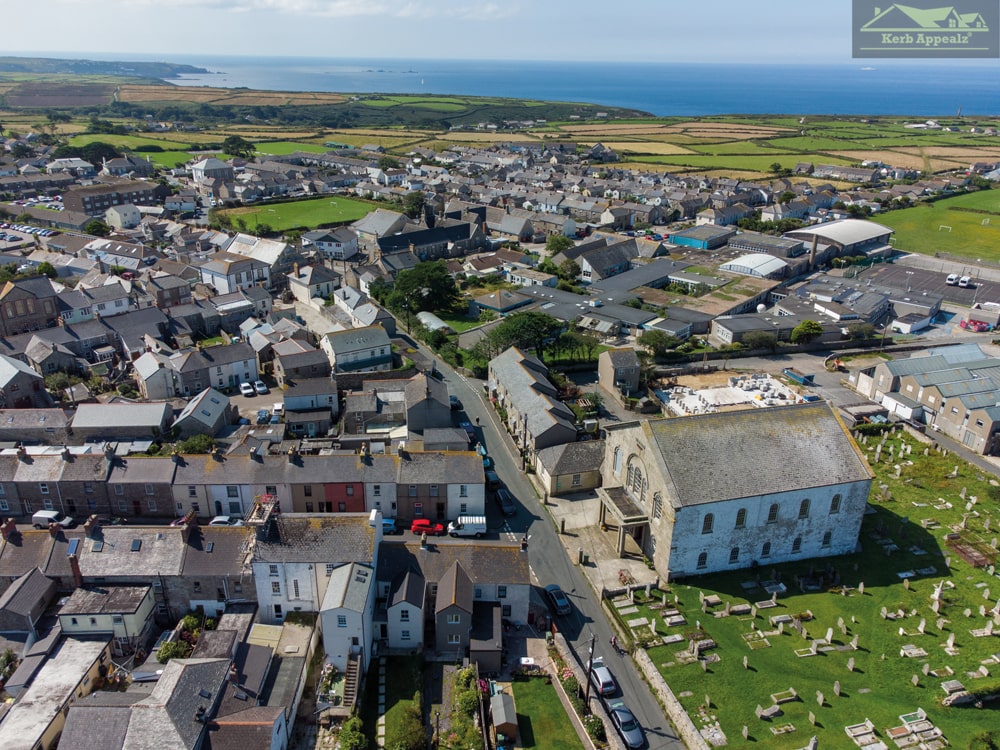 The largest of a string of villages set between the rugged Land’s End coastline and Penwith Moor, St Just is about as far west as you can get: a place of history, folklore, World Heritage mining sites (Geevor, Botallack or Levant) and wild walks to rocky beaches. A little remote for some, it’s a work-from-home kind of place with good local shops, schools and some fine houses. In recent years, the area has become a magnet for artists (priced out of St Ives or Penzance, both only 15 miles away), and the landscapes are among the most dramatic in Cornwall.
Average price: £256,144. A six-bedroom Georgian house recently sold for £290,000.
Estate agent: Kerb Appealz (01736 332076, kerbappealz.co.uk).
Where to stay while you hunt: Short breaks in a two-bedroom cottage at nearby Pendeen Lighthouse start at £352 (01386 897805, ruralretreats.co.uk). 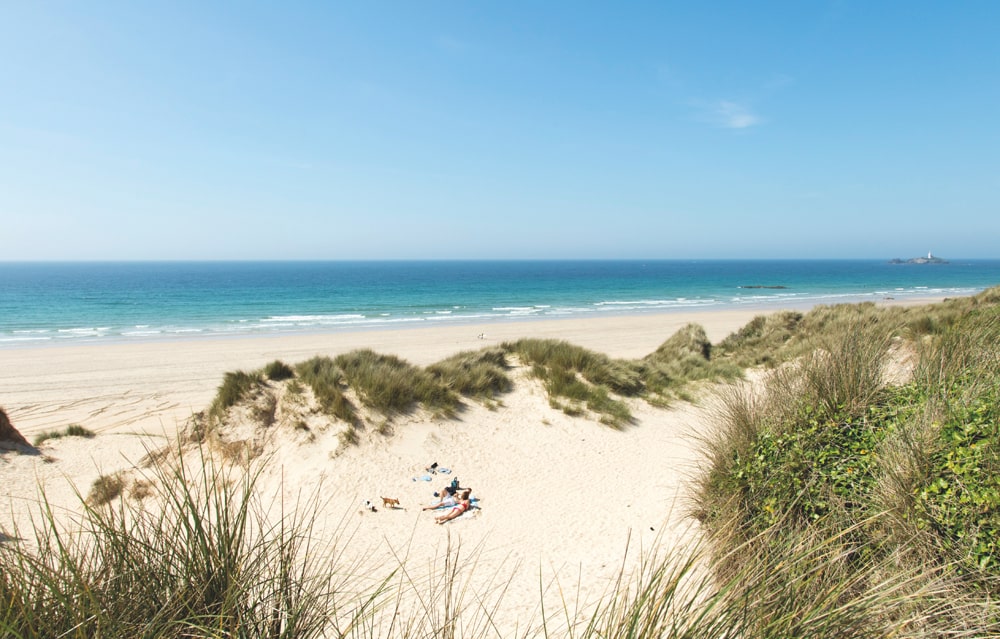 If you can’t afford pricey St Ives, head across the river to Hayle. The seaside town is a curious mix of holiday parks and industrial heritage (a legacy of foundries, shipping and copper smelting makes it a key component of the Cornish Mining World Heritage Site), but its beaches are among the best in Cornwall – and property is literally half the price. Ongoing regeneration developments include the North Quay’s live-work ‘coastal quarter’ with waterside homes and apartments, shops, restaurants and creative workspaces. An established Business Park puts an emphasis on marine renewables (like wave power) and there’s a handy station at nearby St Erth (only 15 minutes to St Ives).
Average price: £265,173. A four-bedroom Victorian townhouse recently sold for £325,000.
Estate agent: Millerson (01736 754115, millerson.com).
Where to stay while you hunt: The Penellen B&B has double and family rooms metres from Riviere Towans beach, from £95 a night (01736 753777, bedandbreakfasthotelcornwall.co.uk).

Still hunting for the perfect seaside location? Check out out 12 most affordable seaside locations in the UK, 10 of the best property hotspots or pick up the latest copy of coast magazine for more property news.

Still hunting for the perfect seaside location? Check out out 12 most affordable seaside locations in the UK, 10 of the best property hotspots or pick up the latest copy of coast magazine for more property news