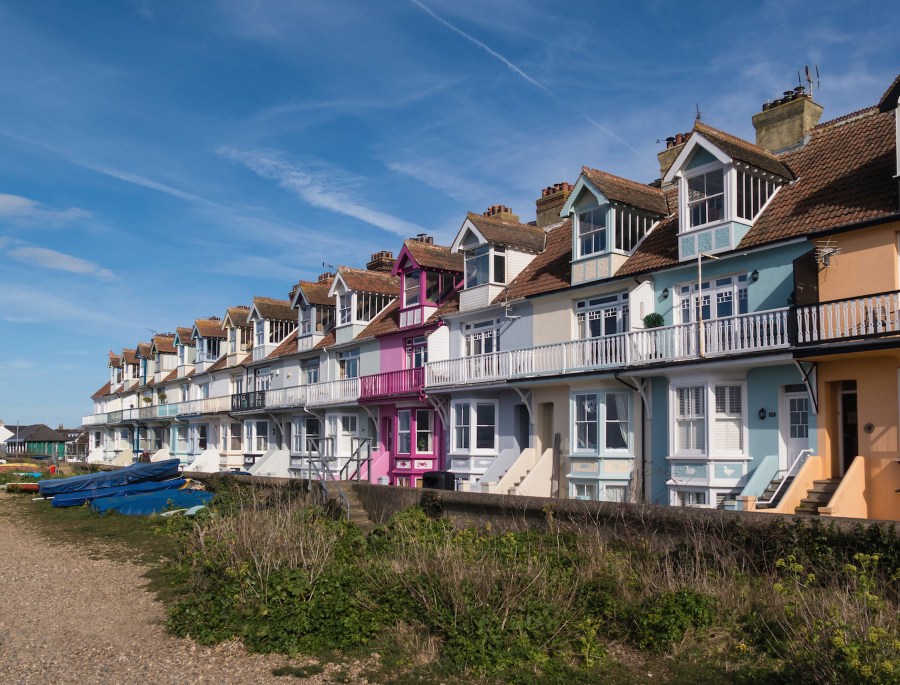 Whitstable is a fishy sort of place. Think crabbing on the beach, gulls wheeling over a salty little harbour, lobster pots, cockle stalls and of course, oysters. Whitstable and oysters go together like cod and chips.

The town’s heritage is in fishing and shipbuilding – and the 19th-century harbour is still a proper working port – but aside from being Kent’s Oyster Central, modern Whitstable is better known as a kind of Islington-on-Sea; an arty, boho beach retreat within an easy weekend jaunt of London. As one local state agent puts it, Whitstable is ‘trendy a la mode’.

Don’t let the word ‘trendy’ put you off though. Whitstable is a bit posh (with lots of gifty little galleries selling cashmere wraps, hand-poured candles and the like) but it’s a bit scruffy too. In a fish-market-and-weathered-timbers sort of way, the real Whitstable still shines through.

People love the narrow streets (the name Squeeze Gut Alley sets the scene), the footpaths that follow the shingle past a rag-tag line of beach huts and tarred fisherman’s huts, weather-boarded houses and colour-washed seafront cottages. There is a castle, a line of pebbled beaches and views across the oyster beds to the Isle of Sheppey. A few miles offshore, the rusting Maunsell seaforts rise from the Thames Estuary like something out of Mad Max.

The relatively easy commute from London is, admits Lavinia Trueman of local estate agent Reeds Rains, one of the big draws. ‘But Whitstable is still a proper community.’ Around 90 per cent of the town is independent, she says. ‘We have three butchers and four greengrocers – and there are not many places that can still say that.’ And there are enough people, all year round, to sustain the town’s micro economy. ‘As soon as the sun comes out the place is heaving,’ she adds.

WHERE TO BUY
Whitstable is blessed with plenty of seaside houses and homes with sea views. You will find them on Preston Parade or Joy Lane in Seasalter, or on Marine Parade – a long road that heads east into neighbouring Tankerton towards Herne Bay. For weatheboarding and Georgian cottages look at Island Wall. For handsome beachfront Victorians (with millionaire price tags) look at Wave Crest (you get a similar style of house for less on West Cliff). For one foot in the countryside, look at Chestfield.

HOW MUCH?
Local house prices are higher than the national average and you’d expect to pay a fairly hefty premium for a seafront house. Typical sales include a roomy semi-detached townhouse on West Cliff priced at £600,000, a three-bedroom Victorian terrace in a conservation area at £420,000 and, in the lower price range, a small terraced cottage at £280,000. Rent prices range from around £750 per calendar month for two-bedrooms up to £1,300 for a family-size house in a prime location.

TIME OUT
Whitstable’s pebbly beaches run from Seasalter to West Beach and on to Tankerton – where a seaward ridge of shingle known as ‘the street’ appears at low tide. There is a cycle path to Canterbury on a disused railway line now known as the ‘Crab and Winkle Way’. The town has a small theatre, a community cinema, a yacht club (one of the oldest in England) and great places to eat: tapas at JoJo’s (jojosrestaurant.co.uk), seafood at Samphire (samphirewhitstable.co.uk) or the famous Wheeler’s Oyster Bar (wheelersoysterbar.com). For local ales and live music head for ‘the Neppy’ – the Old Neptune is one of the UK’s few pubs on a beach (thepubonthebeach.co.uk). July’s oyster festival is the town’s annual highlight.

TRAVEL LINKS
Take a train from Whitstable or Chestfield & Swalecliffe stations, both on the North Kent railway which whizzes into London St Pancras in 76 minutes (by road, on a good day, the 65-mile journey takes under two hours). Canterbury is only five miles away. The nearest airport is London City.

SCHOOLS
According to Ofsted, The Community College Whitstable ‘requires improvement’, but nearby Herne Bay High School (rated as Good) is listed as one the top 50 schools in Kent.

REALITY CHECK
The town can get very crowded in the summer. You’ll struggle to park without your own spot and your idyllic seafront house could feel a little like a fish bowl at times. But tourism keeps the place going and helps sustain all those nice little shops, galleries and foodie cafés.

COMING UP
A bit more gritty than pretty, neighbouring Herne Bay lacks Whitstable’s seadog charm but you do get more house for your money. And there are plans afoot for an ambitious new pier marina, which could transform the town’s already-improving seafront.

PAY A VISIT
The Marine Hotel (marinehotelwhitstable.com)
A classic Edwardian hotel on the seafront at Tankerton (10 minutes walk from Whitstable’s harbour), the Marine’s style is traditional-meets-New England with pale tongue-and-groove in the bedrooms and rich dark blues in the restaurant and bar. The hotel has an Orangery, a decent restaurant (a new chef recently joined) and a pleasant terrace out the front. Some rooms have roll-top baths and sea views. B&B from £115 a night.

Find more inspiration for places to move to by the sea here or in the magazine.

Average house prices: [June 2022]. Source: RightMove
Find more inspiration for places to move to by the sea here or in the magazine.