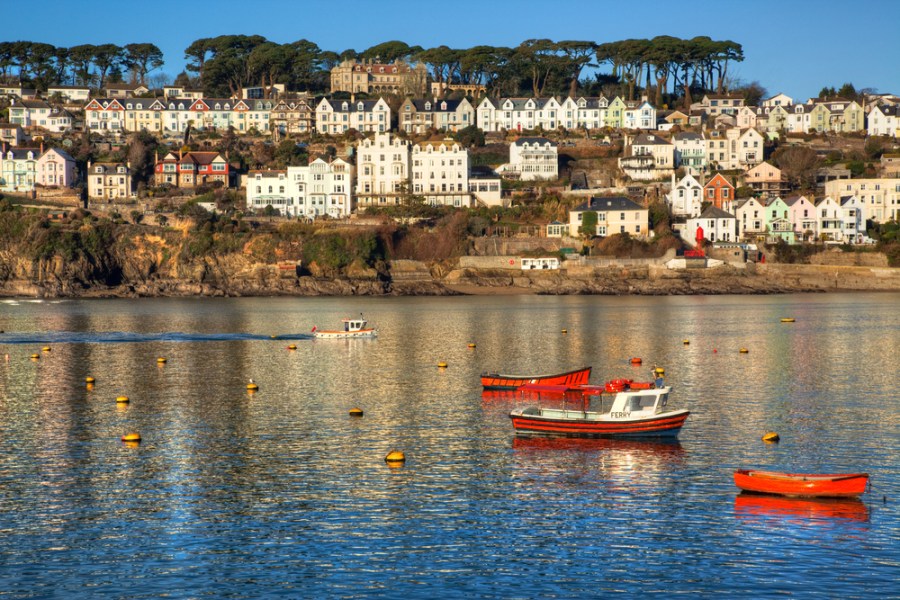 The author Daphne du Maurier began her lifelong affair with Fowey – pronounced Foy – in the 1920s. In those days it was still a hard-working china clay port, but she fell in love with the romantic creeks, the salty fishing quays and the views of pretty Polruan village on the opposite side of the estuary.

Visitors are still drawn to these boaty little places, the sublime woodland setting and the National Trust coastline. Described as the St Ives of the south coast, Fowey is now one of the smartest, most celebrated harbour towns in Cornwall – with some of the region’s highest property prices – but, in essence, it hasn’t changed much.

BEST OF BOTH WORLDS
The Fowey River that Derbyshire-born Deborah Boden, co-ordinator of the Cornish Mining World Heritage Site, fell in love with is cleaner, brighter and more touristy than in du Maurier’s day. Tankers still slide up-river to the port of Golant, past ferries, fishing boats and numerous pleasure craft. A foot ferry zips between Fowey and Polruan, the two river communities which stare at each other from terraces of coloured houses that tumble down to the water’s edge.

Deborah loves the bustle of Fowey, but put down roots in Polruan. ‘It’s my kind of place. It feels like a working Cornish village with a real sense of community,’ she says. ‘And though it’s as pretty as Fowey, it’s not quite as busy.’

Trips over to Fowey, with its streets of stylish shops, galleries, and boutique hotels, take her across the river on the Bodinnick car ferry. ‘What better way to go shopping,’ she says. Deborah enjoys the vibrancy of the river in the summer, but her favourite time is the dusky, misty afternoons in winter. ‘There’s always something to look at, and always something happening, even out of season.’

WHERE TO BUY
The choice, according to locals, is between ‘the money side’ (meaning pricier Fowey) or ‘the sunny side’ (Polruan gets the best of the evening sun). Fowey also has the shopping and the life; rows of grand Victorian houses extend along the Esplanade towards Readymoney Cove; tight-knit fishermen’s cottages and Georgian merchant houses huddle around Fore Street and the Town Quay. Prices range from £180,000 (a one-bedroom back-street apartment) up to £2 million  or more (for a prime waterfront property). Polruan is smaller, quieter and, on average, around £40,000 cheaper. Both places offer a wide spectrum of character properties with fantastic views of the estuary.

TIME OUT
Sailing, kayaking and messing about in boats is one of the best ways to enjoy this beautiful estuary, which offers two yacht clubs, two sail training centres and a calendar of races and harbour regattas. Walkers can take the South West Coast Path from Fowey’s Readymoney Cove to sandy Polkerris, or from Polruan to the National Trust’s Lantic Bay – among Cornwall’s finest beaches. Fowey’s busy Fore Street offers a wiggly line of galleries, shops, salty old pubs and chic restaurants – including Kittows Deli (kittowsqualitymeats.co.uk), the Quay Bakery (quaybakery.co.uk), Sam’s Fowey (samscornwall.co.uk), The Ship Inn (shipinnfowey.co.uk) and Q’s waterside restaurant at The Old Quay House (theoldquayhouse.com). Annual events include the Art and Literary Fowey Festival (in May) and a vibrant Christmas market.

JOBS & COMMUTING
Though Fowey is still a working port, with boatyards on both sides of the river, over half of its economy relies on tourism. Deborah Boden commutes to Truro (an hour each way) but most local workers stay within Fowey and the St Austell Bay area (St Austell, the centre of the china clay industry, is nine miles away). The 270-mile journey to London takes around five hours, either by road or by rail (Par station, on First Great Western’s Paddington to Penzance route, is four miles west of Fowey). The nearest airport is at Newquay (30 miles).

REALITY CHECK
Both areas suffer a lack of parking (a parking space in Fowey has previously been sold at £26,500) and some of the smaller, older properties have no direct vehicle access and little in the way of outside space. The nearest supermarkets are in St Austell, a 20-minute drive (from Polruan, add extra time to cross the estuary on the Bodinnick Ferry).

WHAT DEBORAH LIKES ABOUT THE ESTUARY
The Hall Walk, a four-mile circular route linking Polruan, Bodinnick and Fowey – via ‘sylvan woodlands’ and the foot ferry across the estuary. ‘The paths are mostly easy (with a few steep climbs here and there) and you can do it safely in winter because they are so sheltered. The views from Pont Pill are sublime.’

Deborah’s local, the Lugger Inn on the harbour at Polruan, ‘A traditional village pub, it’s had a recent revamp and offers an interesting new menu of reasonably priced dishes – all using local produce and seasonal ingredients.

​CAN YOU AFFORD IT?