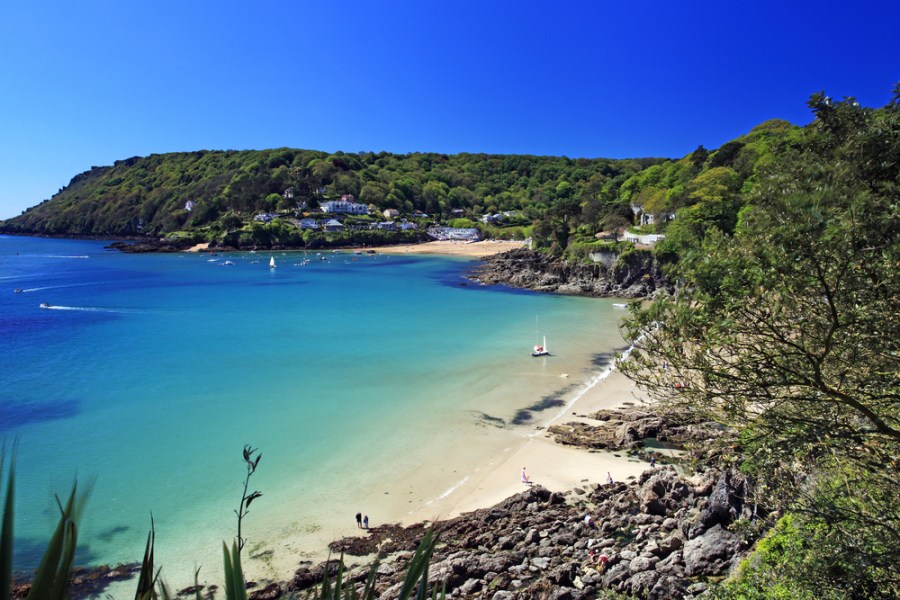 At the mouth of the Salcombe Estuary, in Devon’s beautiful South Hams, is one of the most sought-after seaside towns in the country. It’s little more than a village – just a single high street, a church, a sheltered harbour – but it has a reputation as a honey-pot of the rich and famous. And, needless to say, it’s not cheap. But those who can afford to live in Salcombe, say there’s nowhere better.

Salcombe resident, Lynne Johnston, fell in love with the place while on holiday in the area. Like most of Salcombe’s visitors, she was seduced by the town’s beauty: steep terraces of colour-washed houses drop down to a shoreline of quays and slipways where boats bob on the estuary; to the west of the town, deep wooded valleys hug the rugged cliffs of the National Trust’s Bolt Head; to the east, on the opposite side of the estuary, there’s a line of sandy little beaches; and up-river, down-to-earth Kingsbridge – a market town with a waterfront of its own – provides a useful neighbour for touristy Salcombe.

Lynne, who works part-time at Quba Sails, one of Salcombe’s nautical clothing stores, has married and raised a family in the town. She feels part of a ‘lovely’ local community. ‘I love being so close to the water,’ she says. ‘And I love the contrasts. In summer, it’s busy, but in winter you can have a beach to yourself.’

Salcombe is a little bit out of the way, she admits. ‘Sometimes it feels like a different time-zone – it’s very secluded – a bit like living on an island – and I wouldn’t want to live anywhere else.’

Salcombe’s prime properties – close to town, on the waterfront, overlooking the harbour – tend to command seven-figure price tags. More millionaire houses sit on the wooded cliffs around South Beach and Bolt Head, where prices start from £500,000 for a three-bedroom house or apartment. Even the town’s period terraces can fetch silly money – £885,000 for a three-bedroom cottage with views. In fact, inner Salcombe offers very few options below £400,000.

But don’t give up; there are more affordable options – like heading up-river to Kingsbridge, which is not only cheaper, but more convenient for shops, schools and transport routes. For the price of a Salcombe cottage you can buy a Kingsbridge country house.

The Salcombe Estuary is one of the West Country’s premier sailing spots – and boating, in its many forms, is one of the most popular local pastimes.

As well as sailing, the estuary also attracts windsurfers, canoeists, divers and – on dry land – keen walkers (you can explore Bolt Head, nearby Collaton Wood or, on the other side of the estuary, take the South West Coast Path to East Prawle and the quirky Pig’s Nose Inn). Beyond the estuary, there are more gorgeous beaches: Slapton, Beesands and Blackpool Sands.

In town, you’ll find great places to eat – like the Winking Prawn Beach Café & BBQ on North Sands. Kingsbridge has a nightclub called Coast and three-screen independent cinema, The Reel.

Tourism and marine industries are the mainstays of employment here but, in the town’s salty old boatyards, the traditional Salcombe yawl – a classic wooden racing dinghy – is still hand-built to order; local fishermen still fish for bass, crab and lobster; and, in recent years, the area has developed a side-line in sporty clothing. Both Jack Wills and Quba & Co were born here (the latter makes sail-cloth jackets and bags in a Salcombe workshop).

Some locals work in Kingsbridge but, further afield, it can be a tricky commute. The nearest stations are at Totnes (20 miles) or Plymouth (25 miles). The 240-mile journey from London takes about four hours. The closest city airport is at Exeter, 65 miles away.

There is a good Church of England primary school in Salcombe, but no secondary school. Instead, local children jump on a bus heading for Kingsbridge Community College, a co-ed state secondary which is rated by Ofsted as ‘outstanding’.

If the high property prices don’t put you off, then the lack of public transport might. Limited local facilities make it hard to live here without a car. The seasonal nature of the place won’t suit everyone. In the summer, the population swells to around 18,000. In the winter, it dwindles down to a cosy 2,000.

From the clap-board cladding to the pale, marine colour scheme (all driftwood, sand and ocean blues) this beachfront hotel at Bolt Head has got New England written into its DNA. Most of the luxurious rooms have fabulous views. The hotel also offers a collection of Beach Suite apartments, a buzzy seafood restaurant – which opens onto a decked verandah – and a complimentary shuttle service into town. Doubles starts from around £94 per night.

WHAT LYNNE LIKES ABOUT SALCOMBE

‘Take a boat (or a ferry) to the sandy little beaches on the eastern shore of the estuary: East Portlemouth, Mill Bay and Sunny Cove. When the tide’s out, there are lots of secret little coves that you can only reach by boat,’ says Salcombe resident Lynne Johnston.

On foot, follow the town’s Cliff Road to North Beach, and on to the South Beach Hotel where you can have a drink on the verandah overlooking the sea. ‘If you don’t feel like walking back, you can take a ferry back to the harbour.’ Passengers are ferried from the shore to the boat by a curious sea tractor.