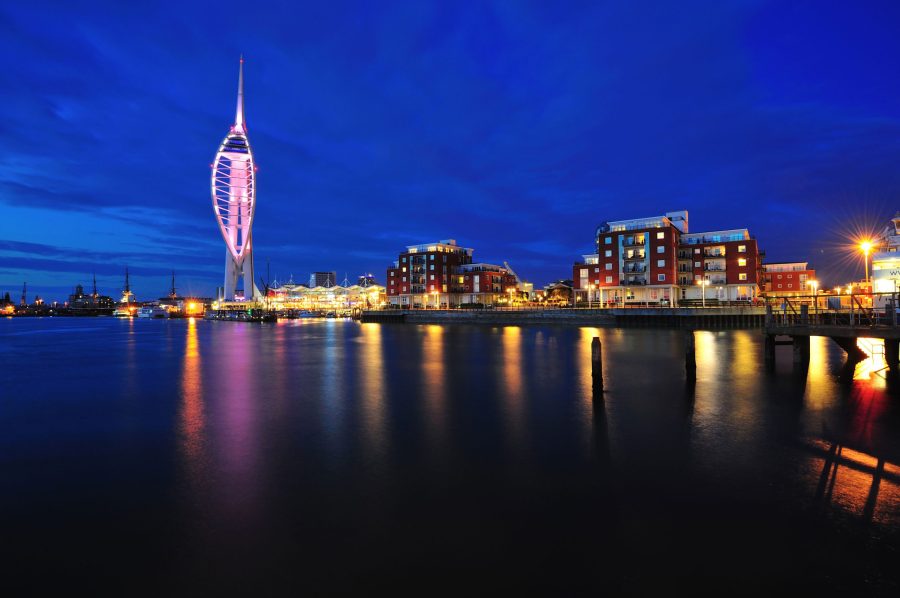 It lays claim to being the UK's only island city, and with its rich naval and maritime association it's heaven for sailors and history buffs alike. By Lesley Gillilan.

Pompey, as the locals call it, must be the oldest, saltiest seaside city in the British Isles. Located on Portsea Island – a thumb of Hampshire jutting into the Solent between Portsmouth and Langstone harbours – it’s been a port since the 12th century. Henry VIII founded the Royal Navy here in 1527, and sailing and seafaring is still the heart and soul of this ‘Great Waterfront City’. Today, Portsmouth is home to two-thirds of the Navy’s surface vessels.

The sight of huge ships gliding in and out of the harbour is the stuff of every day life, but there are other things worth noting about Portsmouth: it’s a university city, with two cathedrals; at Southsea and Eastney there are beaches, piers, amusements and seaside parks; and international tourism thrives on the harbour where the 21st-century Spinnaker Tower looks down on the decks and masts of the Historic Dockyard, with its world-class collection of iconic ships (from the Mary Rose to Nelson’s HMS Victory and Queen Victoria’s HMS Warrior).

‘Portsmouth is busy all year round,’ says recent convert Holly Westwood. ‘There’s always something going on.’ When she moved from Cheshire to Portsmouth to join her Royal Navy husband, it was, she admits, a wrench. She had a good job with BBC Manchester and she didn’t think she’d ever leave (‘I’m a proper northerner,’ she says). But she has since found a home in Southsea, a job as public relations manager of Portsmouth’s Historic Dockyard, and she has embraced the city and its seafront lifestyle.

‘I soon settled in and started to love all things naval,’ she says. She likes the location, the easy access to Europe or the Isle of Wight, and the waterfront culture. ‘I walk everywhere.’ Her commute to work takes her along the Solent shoreline, past Southsea Castle and the Tudor forts of Old Portsmouth. ‘I might see HMS Illustrious coming in, yachts sailing past, or a banana boat heading into port,’ she says. ‘I like being connected to the sea and feeling part of British history.’

With its avenues of large detached houses, gardens and Canoe Lake, long shingle beach and views across the Solent, the Southsea shoreline is a popular choice. Closer to the city centre, Old Portsmouth’s narrow streets and cobbled lanes offer a mix of listed Georgian houses and modern infill (10 per cent of Portsmouth’s pre-war housing was destroyed during the Blitz). Expect to pay around £500,000 for a decent two-bedroom apartment in prime Southsea or a three-bedroom house in Old Portsmouth. For cheaper properties, go further inland: north of Southsea Common or off Albert Road (where modest Victorian houses start at around £200,000).

Heaven for sailors, Portsmouth harbour and the Solent offer a range of watersports fromkayaking and windsurfing to power-boating and stand-up paddle boarding. History buffs are equally well catered for – particularly with the Mary Rose Museum, the Museum of Naval Firepower and harbour tours at the Historic Dockyard (historicdockyard.co.uk).

You can walk or cycle from Southsea to the Spinnaker Tower using the waterfront footpath, which takes in the D-Day Museum and the vintage Clarence Pier amusement park. For days out, take the short ferry hop across to Hayling Islandor a hovercraft to the Isle of Wight. For shopping, check out Southsea’s Albert Road (for quirky indy traders, bars, cafés and the historic Kings Theatre). Favourite local restaurants include the buzzy seafood-wine bar A Bar Bistro (02392 811585, abarbistro.co.uk) in Old Portsmouth.

As Britain’s foremost Royal Navy base, Portsmouth depends on a broad spectrum of maritime industries (around 10 per cent of the workforce are employed by the dockyard). The city is also home to the headquarters of IBM Europe. Neighbouring Southampton (20 miles to the west) is an easy commute via the M27. The 75-mile drive to London takes roughly one hour and 45 minutes; rail services fromPortsmouth and Southsea station to Waterloo take around 90 minutes. The nearest international airport is Southampton.

Portsmouth is well-served with decent state secondaries, including Admiral Lord Nelson, Priory and Charter Academy (all rated as ‘Good’ by Ofsted).

Portsmouth has a higher population density than London – and is one of the most crowded cities in Europe. The downside of this is traffic congestion and a lack of wide open spaces (unless you count the sea); the upside is a vibrant city atmosphere.

Just across the water, Gosport is often seen as Portsmouth’s poor relation, but the town has a lot to offer, including good beaches, historic dockland and great views of Portsmouth harbour. A number of regeneration initiatives are in the pipeline, notably the sensitive conversion of the former Royal Haslar – a vast 18th-century military hospital set in 60 acres of Grade II-listed parkland. The complex’s mix of handsome Georgian buildings are set to form a waterfront village community.

What Holly likes about Portsmouth

Soprano’s, an authentic Italian-Mediterranean restaurant in Southsea (02392 811139, sopranos-southsea.com). ‘The food is exceptional,’ says Holly, ‘though it’s so popular you often have to book days in advance.’

For ‘the best cakes in the whole of Portsmouth’, the Tenth Hole tearoom (02392 830009, thetenthhole.co.uk) at the nine-hole pitch and putt golf links on Southsea’s Eastern Parade. ‘We often go there for breakfast on a Sunday morning – and we buy slices of cake to take home.’

Portsmouth harbour’s Gunwharf Quays (gunwharf-quays.com) for its many waterfront cafés, bars, contemporary outlet shopping and the landmark Spinnaker Tower. ‘You can sit at an outdoor table and watch the yachts in the marina and the ships sailing in and out of the harbour.’

Two minutes from Southsea Beach, this jazzy little number is decorated in a cool-kitschy style with glossy floors, Perspex bucket seats dangling from lofty Edwardian ceilings, purple leather sofas and theatrical objets d’art. Each of the 14 rooms is a one-off: the Austin Powers-style ‘Gloating You’re Not Here’ has an 8ft circular bed and a double Jacuzzi; romantic ‘Glad to Be Here’ has a four-poster and a roll-top tub. B&B from £80 per night.

Although it's more readily associated with famous seafarers (like Admiral Lord Nelson), Portsmouth is also the birthplace of Victorian author Charles Dickens and mechanical and civil engineer Isambard Kingdom Brunel.