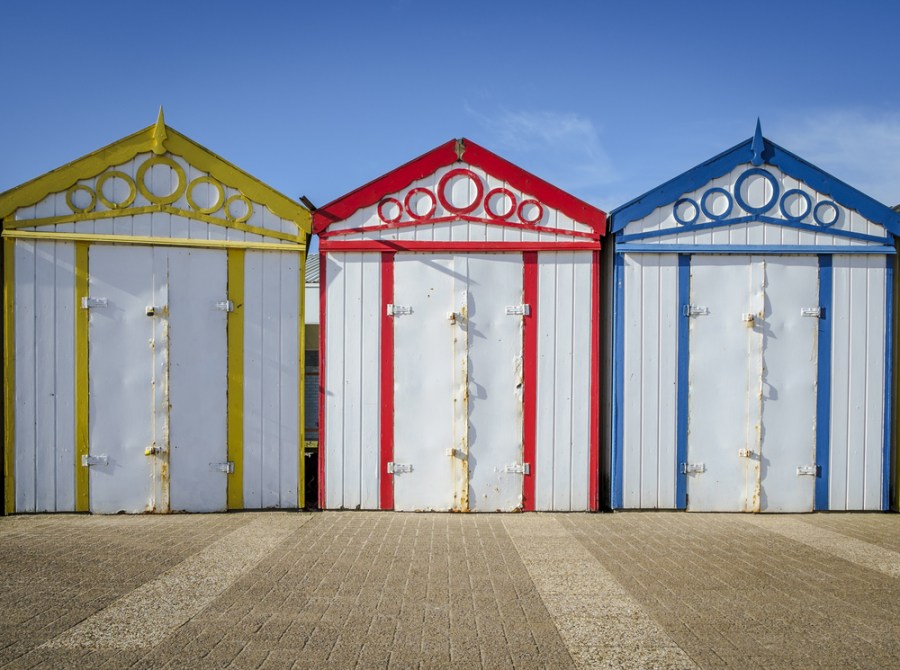 From fun fairs and donkeys rides to sandy beaches and great-value property, this lively seaside resort has so much to see and enjoy. Words Lesley Gillilan.

On the so-called Sunshine Coast, the gateway to the Norfolk Broads, this is one of England’s largest, loudest seaside resorts: a golden mile of crazy golf and bingo, flower-decked guesthouses and donkeys on the beach, fish and chips, sticks of rock and all the fun of the fair. It’s not everyone’s cup of tea, but local artist Jane Hall loves Great Yarmouth – warts and all.

‘I love the vibrant colours, the buzz and the street life,’ says Jane. Her work is influenced by America, she explains, ‘and Yarmouth seafront is like a mini Las Vegas – the lights, the signs, the ice-cream parlours and amusement arcades are a constant source of inspiration.’

Behind the scenes, the Blackpool of East Anglia has an interesting history. Founded as a herring port in the Middle Ages, it still has remnants of medieval walls. Tourism began in the 18th century, but even today, family holidays are only half the story. Most of the town centre rests between the North Sea and the banks of the River Yare – which mixes maritime history with a modern industrial port.

To the north, the town spreads into Caister-on-Sea, and to the south merges with Gorleston (a quieter option at the mouth of the Yare). But it’s the neon glitter of seafront Yarmouth – the horse-drawn carriages, the Wellington and Britannia Piers, the music-hall theatres, the penny arcades – that floats Jane’s boat.

‘It can be a bit dull in the winter, and there’s not a lot of work here,’ she admits. ‘But it’s incredibly cheap – and the beaches are beautiful. I think Yarmouth has the best beach I’ve ever been to – anywhere.’

There are a few pockets of high-price properties – on Gorleston’s Marine Parade houses sell for up to £700,000 – but overall this is Norfolk on a budget. In most central areas of Great Yarmouth, you can buy a large, Victorian house for under £250,000 (a nine-bed semi is selling for £248,000); three or four-bedroom terraces can sell for as little as £150,000. Best addresses include Camperdown, a regenerated street of Grade-II listed terraces between the seafront and the River Yare; North Drive; and properties on St George’s Park. Worth a look is Grade-II listed Great Court, a former Royal Naval Hospital close to South Beach, built in 1811 and converted by architect Kit Martin in the 1990s (prices start at around £145,000).

Aside from the sleepy waterways of the Norfolk Broads, Great Yarmouth’s big attraction is its beaches: a 15-mile stretch of powdery sand, grassy dunes and low cliffs (favourite spots include the sands at Gorleston, Caister and California). It’s also rich in nightlife and entertainment with four decent theatres (Gorleston’s Pavilion or Yarmouth’s Hippodrome), six heritage museums, a nine-acre Pleasure Beach amusement park (think rollercoasters), two piers, golf, sailing, bowling, skate-boarding and a race course. Food-wise, Yarmouth is best known for its market chippies, but there are some good hotel restaurants: the Pier or the Cliff in Gorleston, or the Andover in Yarmouth.

For the best shopping, nip up to nearby Norwich.

On the one hand, it’s a classic tourist town; on the other, a power-house of industry – from port services and boat-building to electronics and technology. Yarmouth is the main service centre for England’s North Sea oil and gas sector and has a growing economy in renewable energies (such as the off-shore wind farm at Scroby Sands).

The nearest commutable city is Norwich (the 20-mile journey is around 35 minutes long). London by train takes roughly two hours and 20 minutes (from Liverpool Street to Great Yarmouth via Norwich). The city of Norwich has the nearest airport, too. To find our more information about the area, you can go to visitnorfolk.co.uk.

According to Ofsted, Great Yarmouth High School, a state-run community comprehensive, ‘requires improvement’. An alternative is Lynne Grove High School in Gorleston, which is rated as ‘outstanding’, though there are strict admissions criteria.

Great Yarmouth was featured in a recent study which cited poor health, poverty and high levels of employment in five seaside towns. Flooding and coastal erosion can be issues for property buyers;
and while the place is heaving with tourists in high summer, it can be dead in winter.

Along with neighbouring Lowestoft in Suffolk, Yarmouth has been awarded Enterprise Zone status, an economy-boosting initiative to help generate jobs and investment,particularly in the renewable energy sector. Work is about to start on The Edge, a £25 million leisure Pleasure Beach development which aims to inject some life into the Golden Mile’s winter doldrums.

A stone’s throw from Gorleston’s glorious sandy beach, the Pavilion Theatre and bandstand gardens, this Grade II-listed hotel was built in 1897. The updated décor is modern meets cruise-ship Art Deco – a style which runs from the Pier restaurant and bar up to the sea-view rooms (portside rooms overlook the River Yare docklands). Good food, a bustling bar and great staff, make it one of the area’s best places to stay. Doubles start from £80 per night.

WHAT JANE LIKES ABOUT GREAT YARMOUTH

Regent’s Road: the illuminated souvenirs-and-fast-food shopping street that runs from the seafront down to the town’s historic marketplace. ‘It’s gloriously tacky. Most of the shops are family-run, and some have been there since the 1970s.’

The Joyland Fun Park’s American Diner on the seafront – a genuine transatlantic import, all chrome, leatherette and a Statue of Liberty. ‘On Sundays, you often see classic American cars parked outside’.

The Rumbelow Gallery in Great Yarmouth’s Community Library. ‘It’s our own little Tate Modern – a state-of-the-art space devoted to local artists. I was the first to exhibit there when it opened in 2009!’