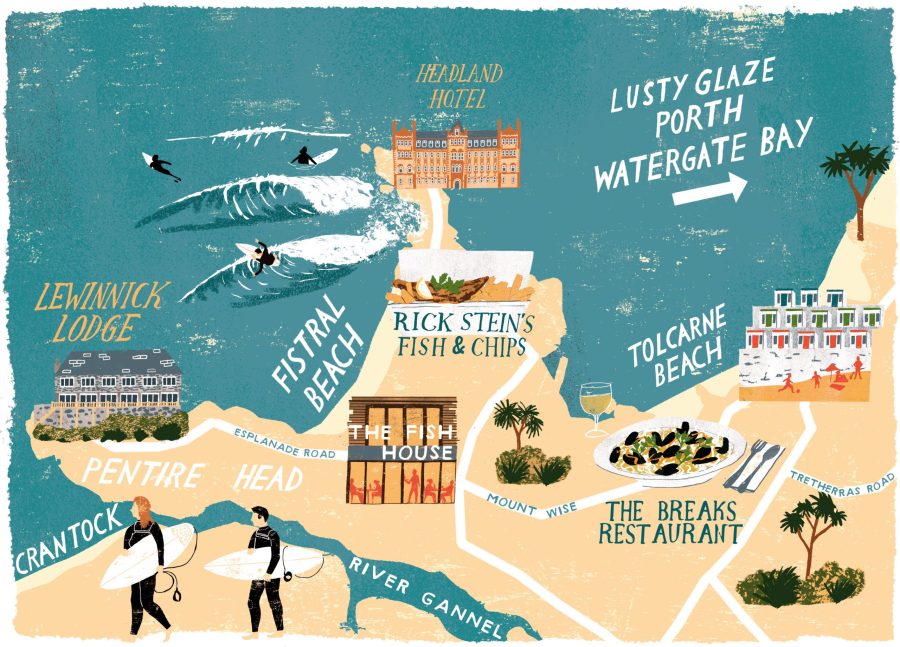 Here in Britain’s surfing capital, a jaunty Atlantic seafront bristles with surf schools, lodges and surf-pod beach huts. Surfy music festivals, camper vans, tanned lifeguards and crowds of barefoot dudes with sun-bleached hair and Hawaii-style board shorts are part of everyday life in this laid-back Cornish town. But there is more to Newquay than beach breaks, barrels and Fistral Bay.

First, all those beaches: Towan, Tolcarne, Lusty Glaze among others – all of them vast, and as good for sandcastles and deckchair sun-bathing as they are for world-class waves. Then the location: between the Porth Valley and the River Gannel, the town hugs the coast’s long bays of high rugged cliffs and the beautiful Pentire Headland.

Between beaches, a proper Cornish fishing harbour takes old New Quay back to its roots. And in a process of reinvention – shaking off the party image – Newquay is fast earning its stripes as one of Cornwall’s finest food hubs. ‘Newquay is on the up,’ says Paul Harwood, a former Rick Stein chef whose faith in the town’s regeneration has given him the confidence to open his own restaurant-on-the-beach, the Fish House at Fistral.

It was the surfing that first lured Paul from east London to Newquay when he has a teenager. What made him stay, he says, was the quality of the local seafood and the opportunities for a ‘passionate young chef with a surfing habit’. He and his wife, Elise, have since spent some time in France and the Far East, but when they decided to settle in the UK ‘it had to be Newquay’.

‘It’s a really friendly place to live in,’ he says. ‘And a great place to bring up children – especially teenagers.’ His Cornish-born daughter, Olivia, and son, Sam, both keen surfers, are in no hurry to leave.

The place is still a little run down in parts, admits Paul, but away from the town, it’s all about the sea. ‘After all these years, I still feel very privileged to wake up so close to the ocean,’ says Paul. ‘I will never tire of the views.’

WHERE TO BUY
The most sought-after houses tend to sit on the slopes of Pentire Head – most of them bright, white and New-World modern, with views of Crantock beach or Fistral Bay and higher-than-average price tags (£1.5 million currently buys a four-bedroom bungalow in West Pentire – or a 40-room hotel in town). Much cheaper are terraces of Victorian houses lining the hilly streets that roll down to Fistral from the Mount Wise area or hang around the centre close to Towan Beach (roomy family homes from £250,000). To the east, around Lusty Glaze, there are crescents and cul-de-sacs of bungalows and beach houses. Out of town, the seaside villages of Crantock and Porth are minutes from Newquay.

TIME OUT
Surfing is king, but Newquay has lots more to offer. Try golfing, coasteering, kayaking, traction kiting, jet-skiing or diving, among a host of active sports. The après surf scene is lively and late. There are great coastal walks, a Blue Reef Aquarium, a luxurious spa complex at the seaside Headland Hotel and a beach for every occasion (nine of them in all, including neighbouring Crantock, Porth and Watergate Bay). A growing stable of cool ocean-view eateries includes The Breaks on Tolcarne Beach, Paul Harwood’s Fish House and the new Rick Stein chippy. Annual events in town include the harbourside Fish Festival. For more information, see visitnewquay.org.

JOBS & COMMUTING
Newquay was built on fishing but thrives on surf tourism and holiday trade – though its handy location (close to the A30 and Cornwall’s main airport) makes it a good place to start or grow a variety of other businesses: the Atlantic Brewery, for example, Camellia Interiors and the airport’s Aerohub enterprise zone. Newquay station is the northern terminus for the Atlantic Coast Line, which heads south to Par – where you can pick up a mainline train to London (the entire journey takes around six hours). Newquay International airport is five miles from the town.

SCHOOLS
Newquay has two popular secondaries: Tretherras, close to the centre, is an academy and Treviglas in St Columb Minor is a community college.

REALITY CHECK
Newquay’s High Street hasn’t always had the best image: too many bars and, in high season, crowds of partying stags, hens and binge-drinking teenagers – however, the council’s recent crack-down on anti-social behaviour is having a positive effect on the town, which is rapidly shaking off its ‘wild west’ reputation.

PAY A VISIT
Lewinnick Lodge
With captivating Atlantic views from a clifftop perch on Pentire Head, this cool boutique hotel combines a romantic refuge with a bustling bar and brasserie and the best sunsets in town. In glamorous, designer rooms, sink into king-size beds or a relaxing sea-view bath, wake up to waves crashing on the rocks below and enjoy breakfast on the sunny deck. The beaches at Fistral or Crantock are a 20-minute walk along the cliff path. Doubles from around £135 per night.

For more inspiration on moving to the coast, click here. Keep up to date with our monthly 'Move To…' articles in the magazine.

WHAT PAUL LIKES ABOUT NEWQUAY
On the beautiful River Gannel, between Pentire Head and Crantock Beach, the Fern Pit Café (fernpit.co.uk) is reached via a bridge, or by a foot ferry at low tide. ‘It’s the most idyllic spot,’ says Paul. ‘And they do the best crab sandwiches using fresh crab they’ve caught themselves.’

Surfing on Fistral beach. ‘There are more challenging surfs in Cornwall, but Fistral is the classic – and the most consistent as it offers breaks during low, mid and high tides.’

The Fistral Beach Bar, with its cool vibe and big open-air deck, ‘is a fantastic hang-out to watch the sunset,’ he says. ‘It’s always full of locals and surfers, and the staff are great.’ The bar’s themed nights range from Spanish to disco to beach tennis (fistralbeachbar.co.uk).