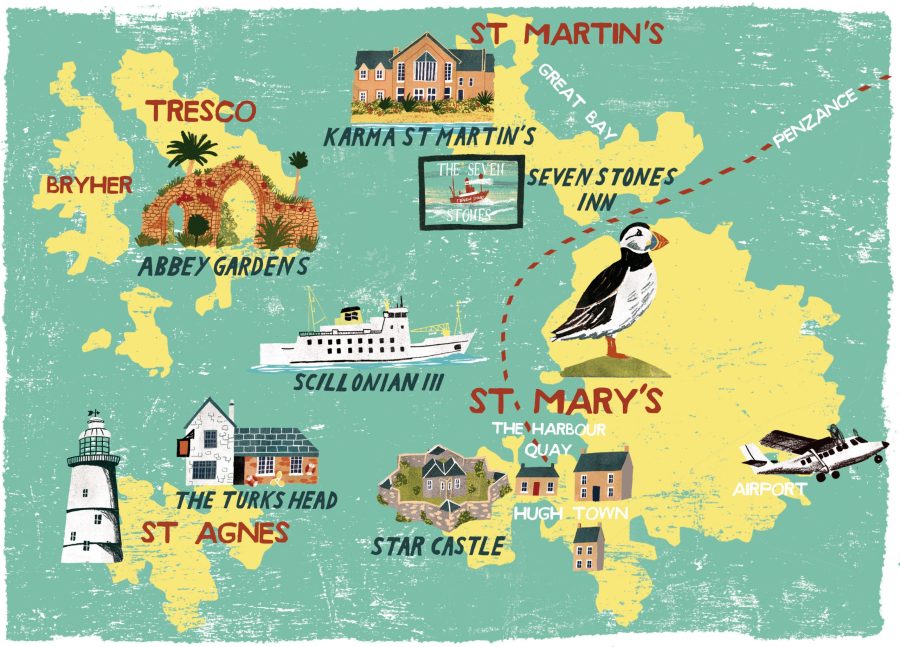 Warmed by the Gulf Stream, this archipelago off the tip of Cornwall offers a mild climate, flourishing landscapes and small, friendly, community living.

There are palm trees, exotic flowers growing wild in hedgerows, shallow turquoise seas and dazzling white beaches which sparkle like diamonds in the sun. Where are we? The Isles of Scilly are only 28 miles off Land’s End, but on a summer’s day this scatter of tiny Atlantic islands could be mistaken for the Caribbean. Famed for its temperate climate and flourishing sub-tropical gardens, Scilly consists of more than 100 islands, most of them rocky outcrops inhabited only by seals and seabirds.

The largest of its five populated islands is St Mary’s; Hugh Town, the capital, is little bigger than a Cornish fishing village. The seasons are at least a month ahead of the mainland. And the slow pace of life harks back to another age: there is barely any crime, very little traffic and the closest it gets to a rush hour is a crowd of day-trippers queuing on St Mary’s quay for the morning boats to the ‘off islands’ (St Martin’s, Tresco, St Agnes and Bryher). The air is fresh and scented with wild garlic and most of the ‘towns’ are just a handful of cottages. No wonder so many people fall for the so-called ‘Fortunate Isles’.

Emily and Dom Crees began their love affair with Scilly on a camping holiday to Bryher. During a honeymooning revisit to St Martin’s, they noticed that the local pub was empty and on the market. They sold their home in the southeast, gave up their jobs (Emily was a garden designer, Dom a specialist in architectural glass) and even persuaded Dom’s parents to join them. A few years back, they re-opened The Seven Stones Inn and began a new life.

‘All our friends thought we were mad to buy a pub on a remote island with a population of less than 140 people,’ says Emily. But like most local businesses, trade at the pub largely depends on the 120,000 visitors who head to Scilly in the summer. The couple love the landscapes and being part of the intimate local community. ‘Everyone knows everyone else here, it’s very supportive,’ says Emily. And they’ve quickly tuned into the minutiae of island life. ‘Someone leaves a cardigan in a café garden and it makes it on to local radio,’ she says. Big news was the day the baker’s wife gave birth in an air ambulance on the way to Penzance, she recalls. ‘It’s such an inspiring place. Even if the pub ticked over, we’d be happy,’ Emily adds. ‘Just being here is enough.’

WHERE TO BUY
St Mary’s is the practical option as it has better services (harbour, airport, hospital, schools, banks, shops) as well as a wider choice of properties – ranging from traditional granite cottages and Hugh Town terraces to village bungalows and coastal farmsteads. With its lush gardens and paradise beaches, St Martin’s is perhaps the most beautiful of the off islands. St Agnes, on Scilly’s southwestern edge, is the most remote; a peaceful islet of flower farms and rocky outcrops. Bryher is the smallest – at only half a mile wide, it’s home to around 80 people – and is a little wilder with its mini-granite hills and rugged Atlantic shoreline. All of the off islands have at least one shop, a café, a pub and a string of white-sand beaches. Tresco is privately owned with no real-estate market other than holiday homes offered on shared ownership schemes.

TIME OUT
Sailing, kayaking, diving, bird-watching, swimming with seals, puffin trips to the Eastern isles, roaming around Tresco’s Abbey Gardens – anything to do with nature and the sea. World-class beaches are a speciality and all the islands have at least one jaw-dropping beauty (of note are Great Bay on St Martin’s and Great Par on Bryher). You can walk around any of the off islands in a morning or cycle around St Mary’s in less than an hour. Shopping is limited (there’s only one supermarket in Hugh Town), but there are plenty of small roadside farm stores (for free-range eggs or home-grown salad vegetables) and lots of good places to eat. For pub food, check out The Turks Head on St Agnes or The Seven Stones Inn on St Martin’s; for fine dining try the hotel restaurants at Star Castle or Karma St Martin’s. For more information, see visitislesofscilly.com.

JOBS & COMMUTING
As Scilly’s main industries are tourism and flower farming, jobs are often seasonal and tend to be in short supply. While young islanders are leaving their homes to find work on the mainland, many newcomers are looking to work from home (broadband has reached the islands), set up small businesses or buy properties with income potential. Success stories among local enterprises include vineyards, galleries, a jewellery workshop, a bakery and The Scilly Cart Company – roadworthy golf carts for daily hire. For local commuters, there are regular boat services running between the islands. To get to Scilly by sea, Scillonian III runs a daily summer service from Penzance (excluding Sundays); by air, Skybus offers flights from Exeter, Newquay and Land’s End airports (islesofscilly-travel.co.uk).

SCHOOLS
There are primaries on all the isles except Bryher, but St Mary’s has Scilly’s only secondary (rated good by Ofsted). Off-island secondary pupils can make use of a boarding facility during the week (at a cost to parents), while sixth formers have to complete their education on the mainland.

REALITY CHECK
The smallest unitary authority in the UK, the Isles of Scilly are part of the Duchy of Cornwall. Around a quarter of the properties are Duchy-owned and despite the small population – only around 2,000 people across five islands – there is a housing shortage and property is expensive to buy. For those who are lucky enough to have made a life here, transport to and from the islands is at the mercy of time, tides and Atlantic weather and can be a mite unreliable. The ferry doesn’t operate in the winter, and flights are sometimes cancelled due to high winds and sea mists.

PAY A VISIT
Star Castle
The star-shaped fortress, built in 1593, is now a family-run hotel with thick stone walls, dry moat, bell tower, dungeon bar and views of the off islands from lawned ramparts. Sleep under oak beams in the castle or in an airy garden room, and dine in one of two atmospheric restaurants. The food is superb: home-grown produce, fresh seafood and wines from the hotel’s own Scillonian vineyard. Doubles from around £204, including a three-course dinner.

Discover more ideas for moving to the seaside here.

What Emily and Dom like about … The Isles of Scilly

THE WALK FROM CARN NEAR QUAY on Tresco to New Grimsby, following the coast road, which has spectacular views across to Bryher – you can walk from Tresco to Bryher at low tide. ‘Dom and I did this walk on our first visit to Scilly. We couldn’t believe we were still in the UK.'

THE UNTAMED NORTH COAST OF ST MARTIN’S, with its rocky footpaths and pristine beaches (Great Bay is often voted the best beach in the UK). ‘We’re lucky to have a ruggedly beautiful landscape on our doorstep.’

STAR-GAZING AFTER HOURS. ‘We can step into the darkness and see thousands of stars in an uninterrupted night sky.’ In an Area of Outstanding Natural Beauty with low light pollution, the islands offer several Dark Sky Discovery sites.

WHO’S WHO?
Actor Jude Law regularly heads to St Martin’s for family holidays; author Michael Morpurgo chose Bryher as the inspiration for his novel, Why The Whales Came; and bird-watching TV personality Bill Oddie is a big fan of all things Scilly.