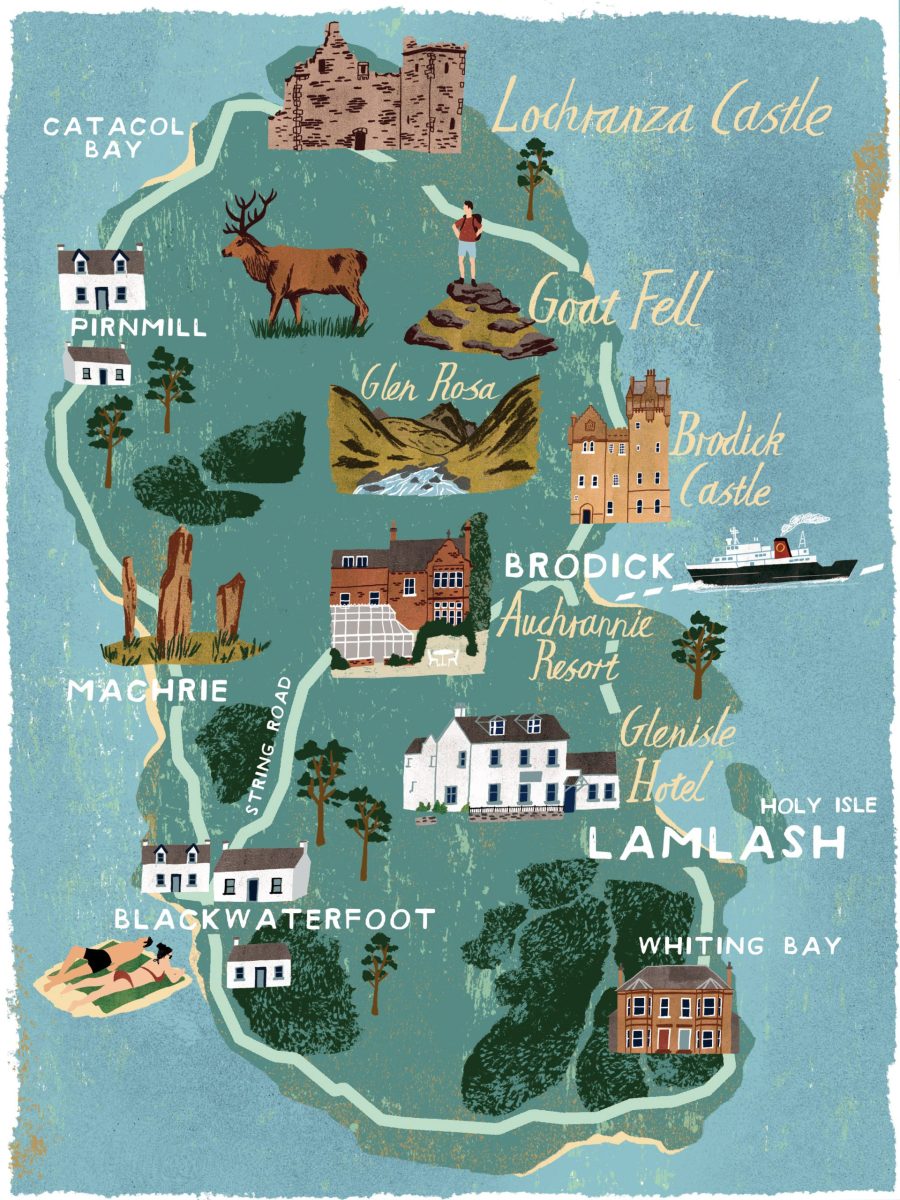 For ‘Scotland in miniature’, head to this appealing island off the Ayrshire coast. Words: Lesley Gillilan

The Isle of Arran, they say, is ‘Scotland in miniature’: a dramatic landscape of highlands, glens, burns and heathery moorlands, snow-capped mountains, sheep-washed lowlands and dense evergreen forests, all packed into a small chunk of west-coast Ayrshire adrift in the Firth of Clyde.

Just an hour from mainland Ardrossan, the island is easy to get to and easy to get around – taking roughly 45 minutes to complete the 20-mile journey from top to bottom. A slow scenic drive around the entire island takes less than two hours: from the ferry port at Brodick in the east, head up to the mountainous north where spectacular Goat Fell, the highest point, rises to a dizzy 2,867 feet; continue past Lochranza’s castle ruins and down to Machrie on the wild, west coast, with its miles of empty shingle; then, on to the gentle hills of the south and back to Brodick via the east coast’s Whiting Bay and Lamlash (the island’s tiny capital).

Aside from typically changeable Scottish weather, the route takes in tiny churches and village halls, miniature harbours, waterfalls, dramatic geology, sandy beaches and, from Lamlash, views across a sparkling bay to Holy Isle. There are few corners of Arran that do not offer heart-stopping views across the water to mainland Scotland.

It is the beauty of Arran’s landscapes that inspires local artist Angela Elliott-Walker, but it was the location that brought her here. When she and her partner, Robbie, and son, Miles, moved from the Lake District over 10 years ago, they were looking for a complete lifestyle change. Angela, who used to head an international design team, was tired of the pressures of corporate life. ‘We saw Arran as a proper destination with good transport links,’ she says.

Summers in Arran are busy, says Angela, but the island never feels too crowded or too remote. ‘And the wonderful landscapes, the wildlife, the peace and safety of the island, has helped give my son a proper, old-fashioned childhood.’

WHERE TO BUY
The majority of Arran’s villages sit on the east coast, close to Brodick and Lamlash – the most convenient places to live for shops, schools and local services (Lamlash is home to Arran’s small hospital). To the south, Whiting Bay has some of the island’s finest seafront houses – including handsome Victorian villas; Kildonan is the place for modern beach houses with views across the sands to tiny Pladda Island. To the north of Brodick, Corrie is one of the prettiest of Arran’s villages, with a teeny harbour and rows of stone cottages at the foot of Goat Fell. For peace and quiet – and great sunsets – head to the tiny hamlets of Pirnmill and Catacol in the northwest corner. Prices on the island hover around £200,000-300,000 and rarely top £450,000.

TIME OUT
Arran offers an active outdoor life: cycling, riding, sea kayaking and climbing, among other adventures. There are seven seaside golf courses and a rich diversity of wildlife includes seals, otters and red deer. Walkers can pick a route on the island’s 62-mile Arran Coastal Way, which takes in a string of beaches – try scenic Sannox, Kildonan’s Silver Sands or the long sand-and-shingle bay at Blackwaterfoot. Discover ancient standing stones on Machrie Moor, hike up to the summit of Goat Fell, or explore the National Trust for Scotland’s Brodick Castle. A foodie heaven, Arran has its own distillery, brewery, cheese and chocolate factory. A handful of lively bistro-bars include the Douglas Hotel in Brodick. There are some great restaurants, too: eighteen69 and Brambles at Auchrannie Resort and the Bistro at Lamlash’s Glenisle Hotel are all quality-tested by Visit Scotland’s Taste Our Best scheme.

JOBS & COMMUTING
Farming and fishing used to be the mainstays, but Arran’s modern economy is driven by tourism, though there are limited jobs in the public sector, as well as thriving cottage industries (such as Arran Aromatics and the Arran Brewery) and a lively arts scene. The island is linked to the Scottish mainland via a Caledonian MacBrayne ferry service between Ardrossan and Brodick, which takes 55 minutes. From Brodick, on a good day (weather-wise), Glasgow is a two-hour commute by car and ferry or via a ferry-linked rail service from Ardrossan. A smaller, less frequent ferry runs between Lochranza to mainland Claonaig. Once on the island, there are good, regular bus services. The nearest airport is Glasgow (45 minutes from Ardrossan).

SCHOOLS
There are seven primaries dotted around the island (Brodick, Corrie, Pirnmill and Whiting Bay, among others) but the island’s only secondary school is Arran High in Lamlash (rated by Education Scotland as good to very good).

REALITY CHECK
Nearly a quarter of the population of Arran is retirement-aged, and over 25 per cent of houses are holiday homes. Shopping is limited; many islanders rely on local delivery services or ferry hops to the mainland. The ferries – a lifeline for the island – can be delayed or cancelled during rough weather, although the government-backed ‘road equivalent tariff’ scheme recently cut fares by more than half.

PAY A VISIT
Auchrannie Lodges
In the grounds of Brodick’s Auchrannie Resort, modern two- and three-bedroom lodges offer luxury self-catering ideal for families. Each five-star lodge includes open-plan living space with a balcony, mountain views, and use of the resort’s two swimming pools and ESPA spa, a Playbarn, family-friendly Cruize Bar Brasserie along with two excellent restaurants: eighteen69 (Scottish tapas) and Brambles Seafood & Grill. Two-bed lodges from around £320 for a two-night stay.

What Angela likes about … The Isle Of Arran

Walk in the stunning GLEN ROSA with deer, red squirrels and golden eagles for company. ‘About three miles from Brodick, the path follows the Rosa Burn with its clear “blue pool” where local children meet up in summer.’

Take a boat trip to HOLY ISLE, the monastic island in Lamlash Bay (home to Eriskay ponies, Soay sheep and the Tibetan Buddhist Centre for World Peace and Health). Have tea and homemade cake in Lamlash’s Old Pier Café while waiting for ‘the wee ferry to another world’.

The OLD BYRE on the west coast at Auchencar, is a lovely café and shop (for Barbour, Seasalt, sheepskin, leather and hand-knits) with a pottery, as well as a children’s play area.

WHO’S WHO?
The ‘String Road’, which climbs hilly terrain to connect the east and west coasts, was built in 1817 by famous Scottish engineer Thomas Telford. Daniel and Alexander Macmillan, founders of publisher Macmillan, were born into a family of Arran crofters in the 1800s.