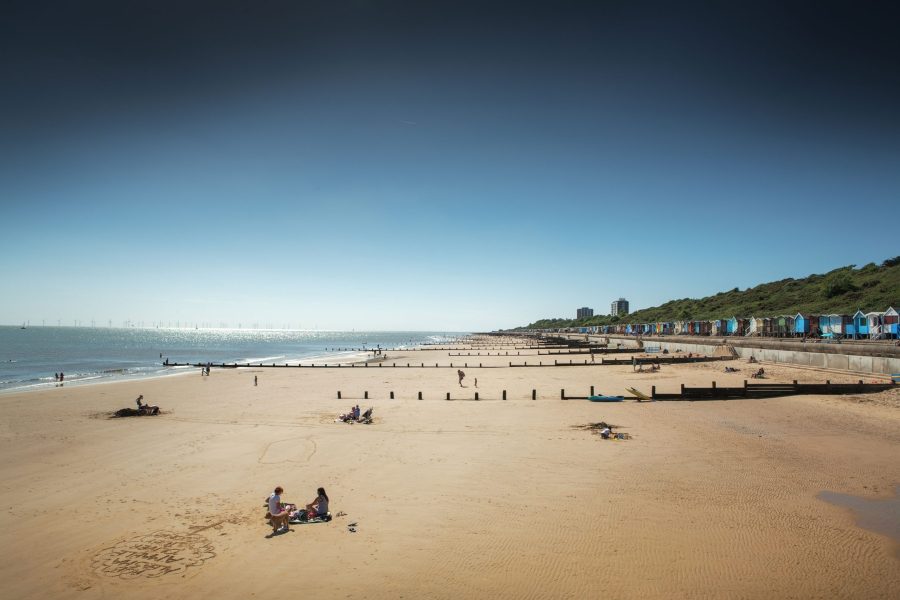 It might have a reputation for being rather staid and resistant to change, but this quiet Essex backwater has more to offer than first meets the eye. Words: Lesley Gillilan

When Sir Richard Powell Cooper dreamed up plans for Frinton-on-Sea in the 1890s, he set out a number of rules: no amusements on the seafront, no pier, no shorts at the golf club and no public houses. The rules stuck, and over the years this very proper Essex resort has developed a reputation for retired brigadiers and genteel old ladies.

With its beach huts, bandstand, mock-Tudor houses and seafront gardens, it’s a place that doesn’t much like change, but change it has. In 2006, the town lost its battle to keep the ‘Frinton Gates’ – a level-crossing barrier that divided the Powell Cooper side of town from the suburban sprawl that developed in later years.

Frinton-on-Sea was ranked as having one of the top 40 beaches in the UK, with its sandy shore, beautiful seashells and gentle waves cited as some of the reasons it's one of the best.

THE MARCH OF TIME
The first fish and chip shop opened in 1992; the first pub opened in 2000. Most of Frinton’s old hotels have been converted into flats. And an influx of young city folk have been buying up the town’s fine mid-century houses – particularly in the northern seafront’s utopian Bauhaus community planned by architect Oliver Hill. The younger generation also embrace Frinton’s close proximity to Walton-on-the-Naze – a more traditional seaside resort with pubs, amusements, the second longest pier in England and walks and wildlife on the Naze headland.

Michelle Nye-Browne moved to the area from Hertfordshire when she was a teenager. She now juggles family life (she has two young children) with running the Naze Tower (nazetower.co.uk) – the 18th-century, Grade II-listed marine observation tower that her family restored and turned into a gallery, museum and tearoom.

She particularly loves the contrast between the two towns – Frinton for its attractive seafront gardens and good local shops; Walton for its family-friendly beach and ‘hidden natural assets’ (like the backwaters of the Naze). ‘It’s out on a limb and very quiet in the winter, but that’s part of its charm,’ she says.

WHERE TO BUY
Although Frinton’s original gated entrance has now been lost, there is some status that comes with living ‘inside the gates’ – where Edwardian houses and pretty gardens line a grid of leafy avenues between the railway and the seafront. The most desirable properties overlook the sea and gardens, or ‘Greensward’: either from the Esplanade (where you can expect to pay from £600,000 to in excess of £1 million), or from the flat-roofed cubes of Oliver Hills’ white Modernist enclave. There are also some very fine houses on First, Second and Third Avenues (some of them are so large they have been converted into flats). For village houses, pretty Thorpe-le-Soken is only three miles inland. For cheaper houses, look at Walton, or at terraced properties in Frinton (from £170,000).

Local beach huts line the front and are all privately owned. Prices start from around £5,000 (for a Walton basic), rising to £20,000 (for a front-row Frinton).

TIME OUT
Frinton has a yacht club, lawn tennis courts and a classy golf club, as well as a long stretch of yellow beach that stretches through Walton to the Naze. Other outdoor activities include walking, cycling, cricket, fossil-hunting on the Naze (sharks teeth are a speciality), boating on the backwaters and picnicking on the Greensward. Frinton has a Summer Theatre season at the McGrigor Hall in July and a small literary festival in October.

JOBS & COMMUTING
Other than the usual employment opportunities (public services, tourism or retailing), you wouldn’t come to sleepy Frinton to look for work – not unless you planned to set up your own business or commute to Colchester (half an hour away). The 85-mile journey to London takes around an hour and 45 minutes, either by car (via the A12), or by train to Liverpool Street (you need to change at Thorpe-le-Soken). The international ferry port at Harwich is 32 miles north, while the nearest airport is Stansted (50 miles).

SCHOOLS
The best in the area is Tendring Technology College. A state secondary, with campuses in Frinton and Thorpe-le-Soken, it’s rated ‘outstanding’ by Ofsted.

Frinton has a time-warped atmosphere for which it makes no apology; and it can be deathly quiet in winter. But immaculate beaches, green open spaces and good schools make it a great choice for young families.

COMING UP
Dyed-in-the-wool Frintonians can be a little snooty about Walton-on-the-Naze – but although the town is not as pretty nor as posh, Walton offers older, more affordable houses. At nearly half the price, terraces of Regency-style Victorian houses are a good bet for those who have been priced out of Frinton’s seafront avenues. Some people think the beach is a tad nicer, too.

With branches in Frinton and Walton, Lilley’s Bakery is a local institution (01255 672373, lilleysbakery.co.uk). ‘They bake the most amazing Danish rings.’

The independent shops and tearooms on Frinton’s Connaught Avenue – once dubbed ‘the Bond Street of East Anglia’ – particularly Wrights Delicatessen (01255 851663, wrightsdeli.co.uk) for meats and homemade produce, and The Hat & The Mouse (01255 678235) for ‘very special cakes’.