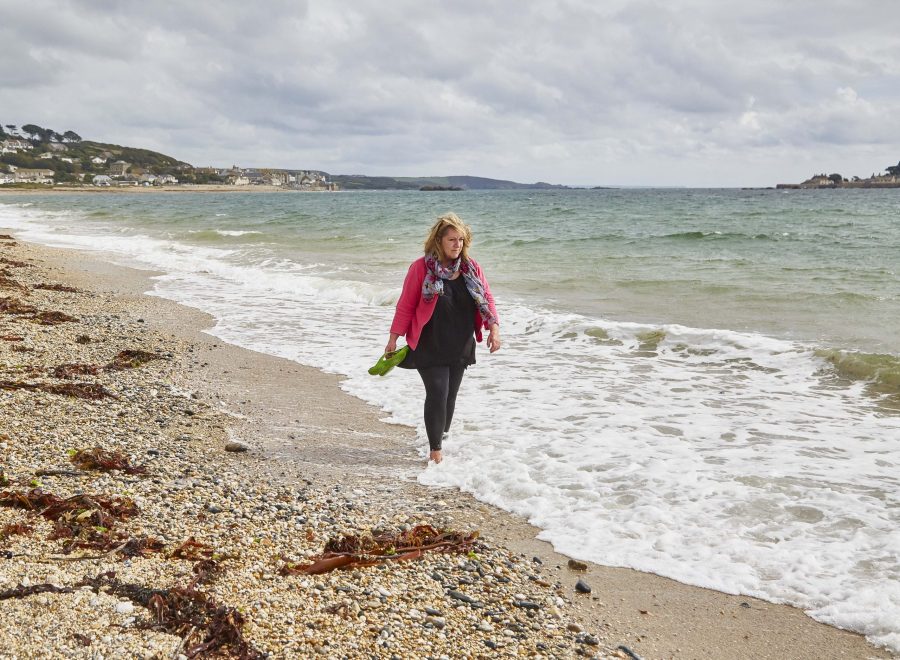 The transformation of a run-down arts club into a boutique guesthouse in Penzance has been a life-changing project for city émigrée Susan Stuart. Words: Lesley Gillilan. Photographs Paul Ryan-Goff

During the first few weeks of owning Chapel House, Susan Stuart spent ‘hours and hours’ just wandering from room to room, gazing at the sea and the changing light. ‘I think it’s really important to get the measure of a place,’ she says, ‘so that you can see how it feels, where the light comes in and where the views are.’

From the upper floors of her handsome Georgian home, she found herself gazing across the slate and granite townscape of old Penzance, at boats bobbing in the harbour; the mesmerising sweep of Mount’s Bay and, in the distance, the island-castle of St Michael’s Mount with the hazy outline of the Lizard Peninsula beyond. From side windows, she peered at fellow Georgian houses on historic Chapel Street, and the granite tower of St Mary’s Church next door. As she discovered, most of the rooms are often drenched in sunlight – the kind of pure, invigorating light that has attracted artists to this far-west corner of Cornwall for more than a century. After years of living in London – and yearning to live by the sea – Susan was in heaven, but for all its charms, buying this Grade II-listed landmark building was a huge leap of faith. 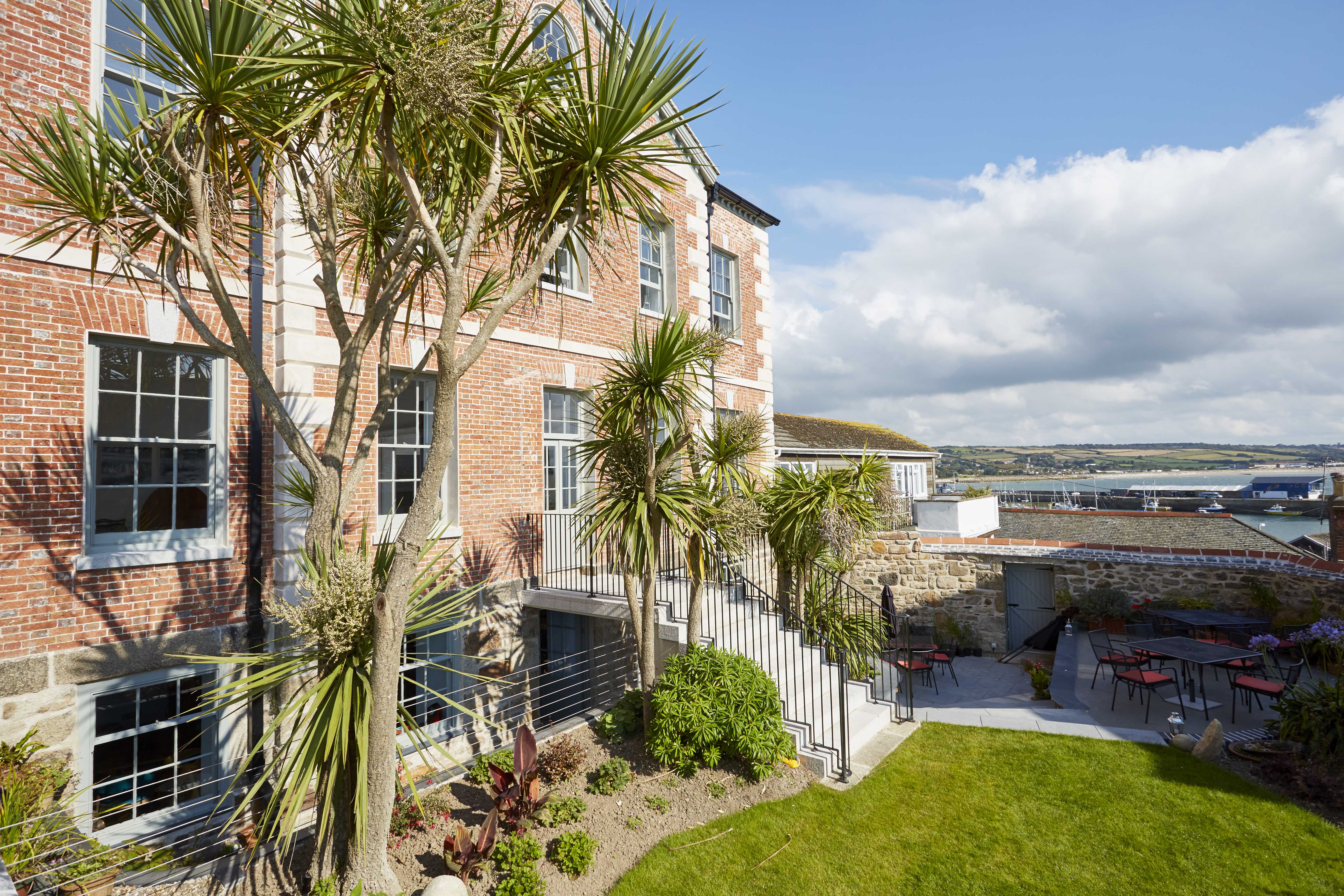 The house she fell in love with was built in 1790 as a family home (early owners include the Royal Navy’s Admiral Samuel Hood Linzee, who no doubt peeked at his fleet from the windows). From 1993, it was run as the Penzance Arts Club, a once-venerable institution, with a gallery, bar and guest rooms, before it gradually declined and finally closed. Susan spotted the club when it first appeared on the market in 2007. The guide price was £1.2 million but she kept an eye on it; and over several years she watched the price slowly come down. An email saying the vendor was now seeking offers over £500,000 saw her scurrying down to Cornwall.

The building she stepped into was clad in brown pebbledash; inside, most of the walls were painted oxblood red – including the ceilings; there was a catering kitchen in the basement and the top floor was a warren of corridors and gloomy rooms. Later, she would discover that the central chimney was a whisker away from a catastrophic collapse. ‘It was quite depressing,’ says Susan. ‘But what I saw, beyond the dark paint, was a glorious Georgian house. Nobody had looked after it for years – and that really appealed to my maternal instincts.’

Within seconds, she had made her decision. ‘I wanted it so badly, I thought, I’ll buy it now, and then I’ll think about how I’m going to make a living later – it was a completely upside down way of doing things.’

OPERATION RESCUE
A chartered accountant, Susan had spent more than 35 years in London. She’d already made a sideways career move by giving up the city for a job as chief executive of the charity, Thrive. But in 2012 she was ready for a lifestyle change, and in the sale of Penzance Arts Club, she saw the perfect opportunity.

‘The more I looked at the house, the more I could see how it could work,’ she says. She envisaged a boutique guesthouse – more upmarket than a B&B, but not as formal as a hotel. ‘I wanted my guests to feel as though they were staying with a friend who happened to live in a lovely house. And the house would still be my home.’ She was brimming with ideas, but from the outset, she knew she couldn’t do it alone. 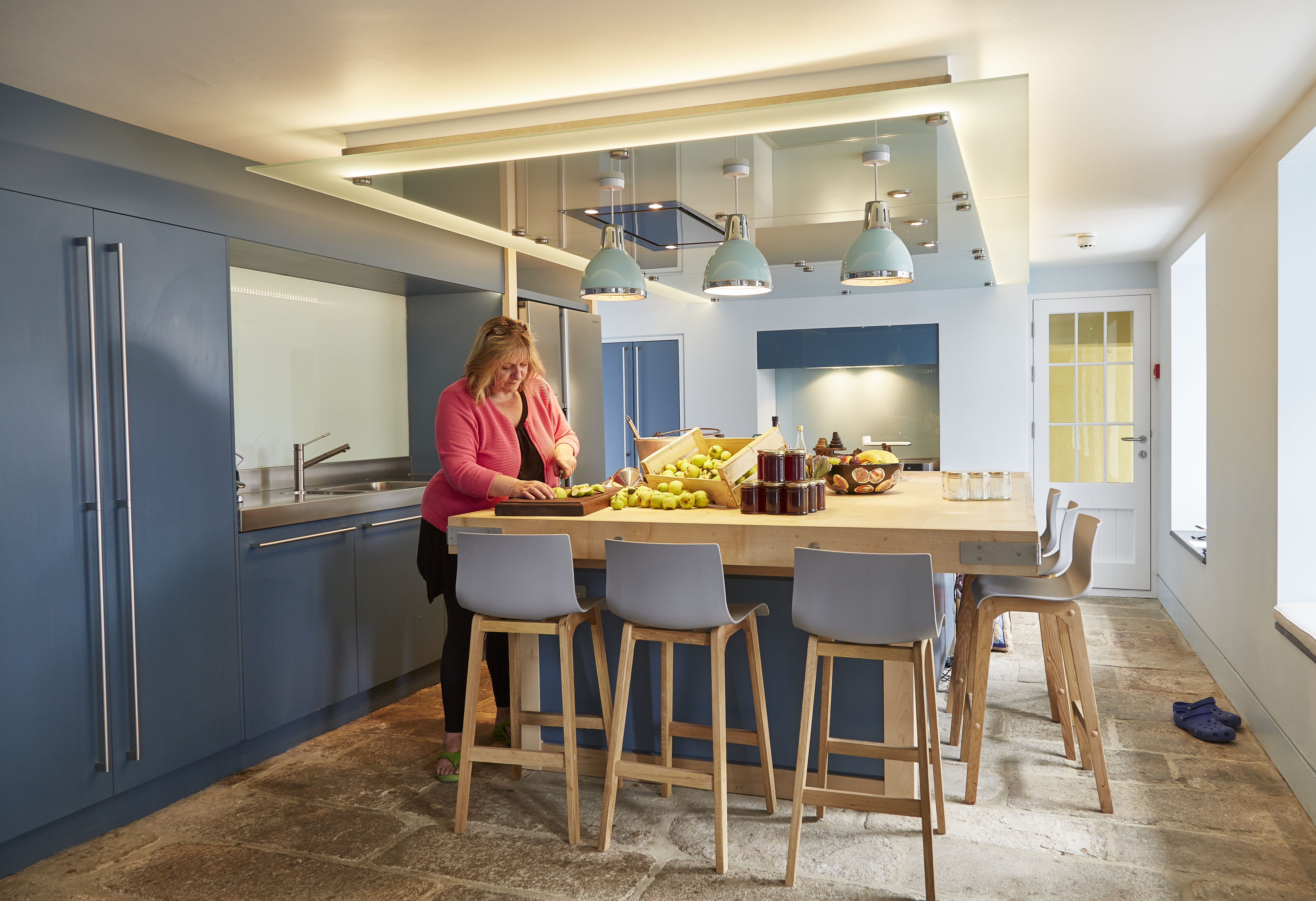 Happily, local architect Keith Bell jumped at the chance to work on one of the town’s most loved buildings. ‘It’s been central to a lot of people’s histories in Penzance,’ he explains, adding that he announced his own marriage at a party in the old Arts Club bar. ‘This was a project very close to my heart.’

Susan describes Keith as ethical and intuitive; Keith describes Susan as a client with real vision. ‘She literally rescued the place from dereliction,’ he says. ‘The building desperately needed help, and the whole project has been as much about regeneration as it has about creating a boutique hotel.’

While a team of builders tackled the crumbling structure, the two of them hatched a plan for the interior space. ‘It was all about the light, the changing colours of the sea and bringing the outside in,’ says Susan.

On the ground and first floors, the priority was to restore the building’s beautiful architectural features. And Susan was very much part of the team. She spent months stripping paint off sash windows, shutters, architraves and the stunning hall door with its ornate glazed fanlight. ‘We called her the Chapel Street stripper,’ laughs Keith. For weeks, she mounted a scaffolding tower, stripping cornices on the stairwell.

Upstairs and downstairs, there were few features worth saving, so they were able to take a more interventional, contemporary approach. In the basement, they enlarged the windows – set into a deep granite wall nearly a metre thick – and created a light, open-plan kitchen-diner with room for guests to eat breakfast or enjoy one of Susan’s delicious homemade suppers. On the top floor, they removed the low ceilings and opened up the roof space. A defining feature of the building’s transformation is a long, angular glass roof dormer, which extends from a lounging space on the top landing and into one of the guest bathrooms, flooding both with natural light. ‘It’s the best place in the house to catch the sunset,’ says Susan. 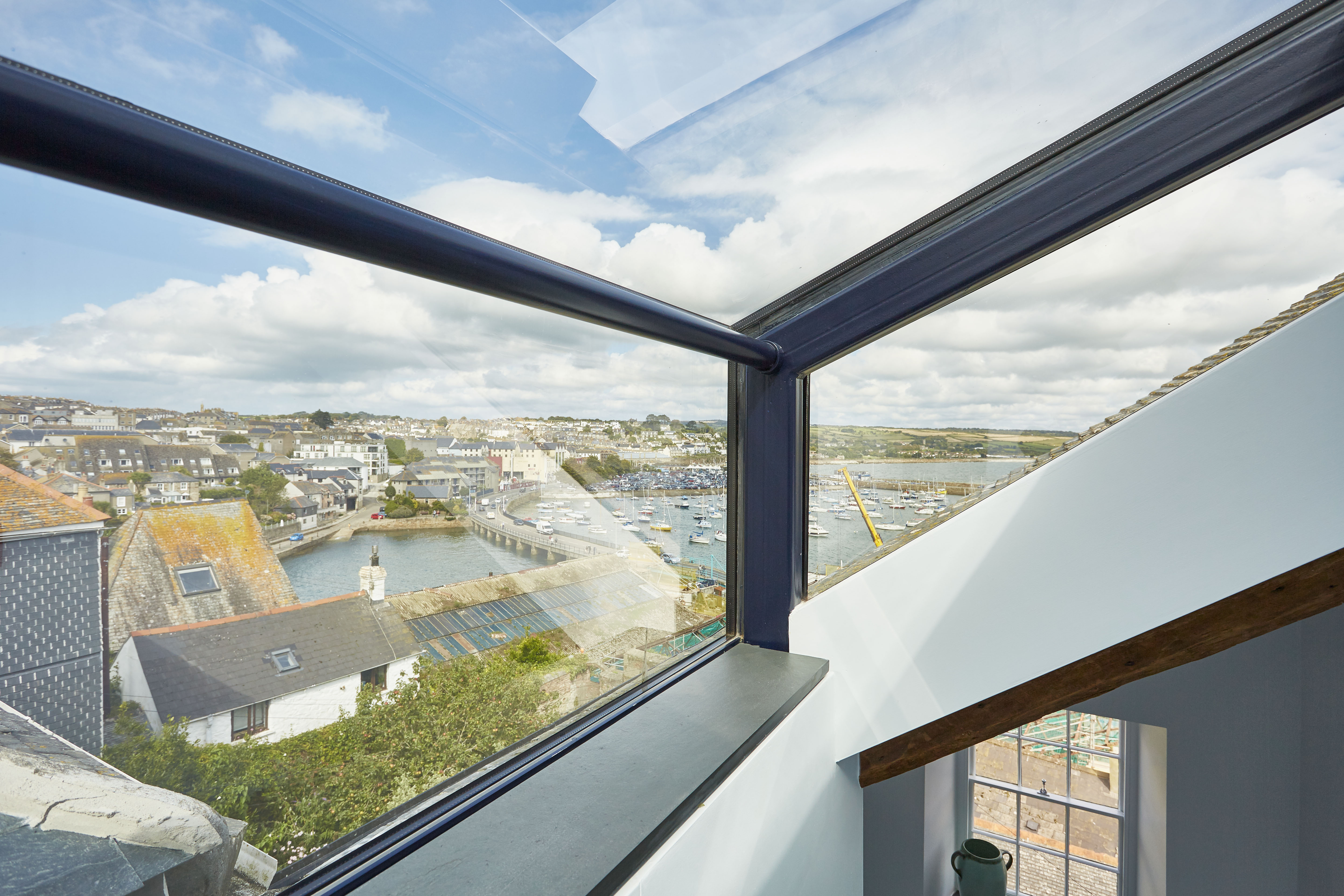 THE ART OF LIVING
Funded by the sale of Susan’s London house, and most of her savings, the regenerated Chapel House has been open to guests since May 2015. The Arts Club’s boho bar is now an uncluttered white space, simply furnished with well-chosen pieces that allow the beauty of the original features to speak for themselves.

‘Georgian architecture goes really well with simple modern furniture as well as furniture of its own time,’ says Susan. ‘And I already had a fair bit of both from my house in London.’

In the six stylish bedrooms on the two upper floors, Susan’s seemingly effortless style skilfully mixes the old, the new and the vintage. The predominantly white and soft-grey décor is livened up with fabrics and accessories in ‘sea colours’ – including
bright upholstery, rugs and works of art.

In keeping with the heritage of the building, Susan has devoted the walls of the hall and drawing room to an exhibition of paintings curated by the Newlyn School of Art and these are offered for sale (Susan donates her commission back to the school to help fund its courses). She is passionate about supporting Cornish suppliers and local enterprise.

‘I love cooking with local ingredients,’ she says. ‘The butcher is full of local meat and you can walk to Newlyn and buy fresh fish straight off the boats. I’m in culinary heaven.’

The kitchen is Susan’s domain, as is her live-work space in the basement, but in the rest of the house, she takes a backseat – ‘a happy compromise’, she says. ‘I don’t mind sharing my space with guests. It’s great to see people enjoying the house and the views and loving Penzance as much as I do.’

For more information, visit chapelhousepz.co.uk. To explore more coastal homes, click here or pick up a copy of our latest magazine.

SECRET SWIMMING
‘I love the hidden cove at Porth Nanven, tucked down the Cot Valley near Land’s End. The beach is all boulder-size pebbles, but past half tide, there’s a little stretch of sand, weird-shaped rocks and a lagoon which is perfect for swimming.’

THE PENZANCE LIDO
Susan is involved with the Friends of Jubilee Pool, and has used her charity experience to help raise funds to repair the damage caused by the winter storms in 2014. The iconic Art Deco seawater pool reopened in 2016 (jubileepool.co.uk).

COASTAL WALKS
She particularly likes the path from Zennor to Cape Cornwall, a dramatic stretch of rocky coastline, where the wild prehistoric landscapes of Penwith Moor meet the ruined engine houses of the Cornish Mining World Heritage site.