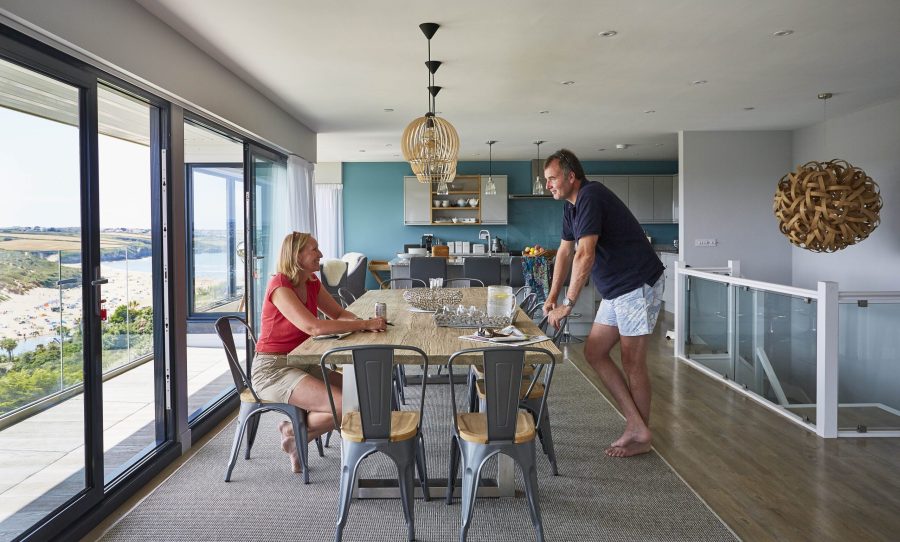 Amanda and Graham Inglis have re-imagined a North Cornwall property to create the holiday home of their dreams, giving them a base from which to surf, swim and explore the coast with their family

‘Our childhoods were spent by the sea, rambling on beaches and building sandcastles, or out on dinghies. It’s in our blood,’ Amanda Inglis says. She and husband Graham grew up by the coast, albeit on different stretches, with Graham in Topsham in Devon, and Amanda on the Isle of Wight. It was inevitable that the call of the sea would eventually draw the pair back.

After living in London they moved to Sussex, half an hour from Brighton, with their 16-year-old twins, Edward and Isobel – but the sea kept calling them closer. They first visited the Pentire headland 10 years ago, when a friend invited them to spend Easter in their holiday home in Crantock, on Cornwall’s north coast. ‘We fell in love with Crantock and returned every year,’ Amanda says. ‘Each time we visited we would look longingly around the area and think “one of these days we’ll buy here”.’

The rugged Pentire headland runs alongside the River Gannel, opposite Crantock Beach. ‘We looked further afield but we decided we would wait – we knew we had to be at Pentire.’ After narrowly missing out on a bungalow which was snapped up by a property developer, the couple received a call from an estate agent just before Christmas in 2015. ‘She had a client on the Pentire who wanted a quick sale. She said “you can have it for this price otherwise it’s going on the market next week”,’ says Amanda.

ALL YOU NEED IS LOVE

The couple rented their friends’ house for New Year and rushed down to view the two-storey River House, perched above the Gannel. ‘It had so much potential but it had been neglected. It had previously had long-term tenants and it needed some love. The front of the house is nothing remarkable, and it was very divided – it didn’t flow. You had to go beyond the entrance area in order to find the view. But when we did, it was breathtaking.’

Amanda felt immediately that the house should be open plan. ‘As we came through the front door there was a wall right in front of us, so it wasn’t initially obvious that there was a view behind. It needed major remodelling.’ But it captured their hearts. ‘It doesn’t matter if it’s a howling gale and pouring rain or the sun is shining and the tide is turquoise, the view is spectacular.’

Today the house is set over three levels with an open-plan living, dining and kitchen space on the middle entrance floor as you walk in. Sliding glass doors frame the previously hidden view, overlooking the Gannel below and the golden sands of Crantock Beach across the water. Downstairs, four en-suite double bedrooms open onto the balcony, which now boasts a hot tub. Amanda’s favourite space is the cosy area off the kitchen that she has named the Crow’s Nest. ‘It was a funny little flat-roofed room with a window before. Now it’s like being in a conservatory – it has a huge window and it’s so relaxing to sit there with a coffee as the tide ebbs and flows below.’

The couple have added a dormer layer at the top of the two-storey house, creating a master suite. ‘Apart from that we didn’t have to extend, although we did remodel it extensively,’ says Amanda. ‘There were four bedrooms and two bathrooms on the lower ground floor, and there was a lot of wasted corridor space downstairs. We pushed everything to the front and ran a corridor along so every bedroom has a sliding door onto the balcony.’

The dormer level was one of many additions in the house’s history. Built in the 1960s as a bungalow, a second storey was added in the 80s, and a pitched roof in the 90s.

Thanks in no small part to Amanda’s frequent day trips to Cornwall during the building process, the work went fairly smoothly. ‘I was hands-on purely because I know contractors tend to make their minds up to do something unless you request otherwise.’ Having lived in a caravan 13 years before while the family’s Sussex home – a 500-year-old Grade II-listed medieval hall house – was restored, she had plenty of experience to call on. ‘Luckily we’re only 15 minutes by train from Gatwick, so every two or three weeks I’d get the 9.30am flight to Newquay and the 6.30pm back to Sussex. I’d catch up with progress and meet with the plumber or source granite, for example. It was very productive.’

The hard work has paid off. As you walk into what is arguably the piece de resistance – the vast open-plan living space – the view and the interior blend seamlessly together, bringing the outside in. ‘All the colours in the house replicate the colours outside, because the outside is so important to the house,’ says Amanda. ‘Everything has to be harmonious.’ The grey of the luxurious sofas and dining chairs reflect the granite, gold lights above the dining table mimic the sand, and a turquoise wall in the kitchen picks out the hues of the water.

‘The interior needed to work with the coastal landscape,’ she adds.

It also needed to be finished on a budget. Amanda says her ‘trade-off’ with Graham, who is a trained accountant and now works in the property development sector, was to buy a couple of statement items and be clever with the rest of it. ‘So that’s what we did.’ The lounge is testament to this: suspended above the stairs is a giant Tom Raffield steam-bent pendant lampshade. ‘I first spotted it at the Chelsea Flower Show and later discovered Tom was based in Cornwall. It’s gorgeous.’ True to her word, this is complemented by three more modestly priced but striking lights above the kitchen table. ‘You wouldn’t know they were £30-40 each,’ she says.

The couple worked with South West Carpets to commission a grey handmade rug to sit under the long dining table that seats 12 people, while Amanda procured the grey chairs from a restaurant supplier for ‘something ridiculous like £25 each’. The reclaimed pine dining table came from Sustainable Furniture, which has a warehouse in Newquay, as did the low, long reclaimed teak coffee table in the lounge. On the side tables sit two striking glass lamps from The Recycled Glassware Company in Dorset.

In the bathrooms, tiles that mimic a slate effect were sourced from The Cornwall Tile Company in Newquay, while Amanda found the sandy coloured 100% wool rugs for the bedrooms in Dunelm. ‘They have to be durable and hard-wearing and these work brilliantly.’

On the walls of the lounge and the bedrooms hang signed limited edition seascape prints by local painter, John Greig. ‘We went to visit him in his studio just outside St Ives and worked with him to make sure these were the right paintings with the right frames for our rooms,’ says Amanda. ‘He stretched them onto canvas and framed them for us.’

The first time the family were able to stay in the property was when the remodelling finished in December 2017. ‘We went down over Christmas and New Year, which was fantastic,’ says Amanda. ‘On New Year’s Eve we sat in the hot tub with a bottle of Champagne while the neighbours set off fireworks. It was very special.’

In August the family’s visit coincided with the Boardmasters Festival which takes place at Fistral Beach and Watergate Bay – a popular event with Edward and Isobel – while every January, Amanda now visits with five girlfriends, a trip which includes coastal hikes, cream teas and aperitifs in the hot tub. ‘It’s great girly time!’

The family make the most of the coast when they visit. When not walking their two cockapoos, Mabel and Sasha, along the coast path, they are surfing, stand-up paddleboarding or swimming. ‘We’re always in the water,’ says Amanda. ‘Graham and I love sea swimming in the summer, and in October his sister and I went paddleboarding for three hours up the Gannel. We often see seals when we’re out and the water is crystal clear.’

The surfer’s paradise of Fistral Beach is just a 15-minute walk away, and the family often head there. ‘We walk there in our wetsuits and flip-flops with boards under our arms,’ Amanda says. ‘It’s a lovely way to spend time as a family.’ A stone’s throw from River House, the ferry runs from the Fern Pit Cafe across to Crantock Beach at high tide. ‘In summer we sit on the balcony and you can hear the lovely putt, putt, putt of the ferry as it goes to and fro.’

Amanda and Graham’s favourite places in and around Crantock

• We always visit The Fish House (01637 872085, thefishhousefistral.com) on Fistral Beach at least once when we are staying in Cornwall. It’s owned by Paul, who used to work for Rick Stein in Padstow, and his wife, Elise. Graham’s favourite is the Roasted Hot Shell starter – a selection of shellfish in a delicious sauce.

• We often go to Lewinnick Lodge (01637 878117, lewinnicklodge.co.uk) for a pub supper because we can take the two dogs with us and the kids can play pool or watch football while we have a drink and something to eat. It’s less than 10 minutes’ walk from the house.

• One of our favourite walks is around the coast to Polly Joke Beach and onto Holywell Bay.

• A few doors away from our house is the Fern Pit Cafe (01637 873181, fernpit.co.uk). It makes amazing crab sandwiches and also has a little boathouse where you can buy fresh crab and lobster.