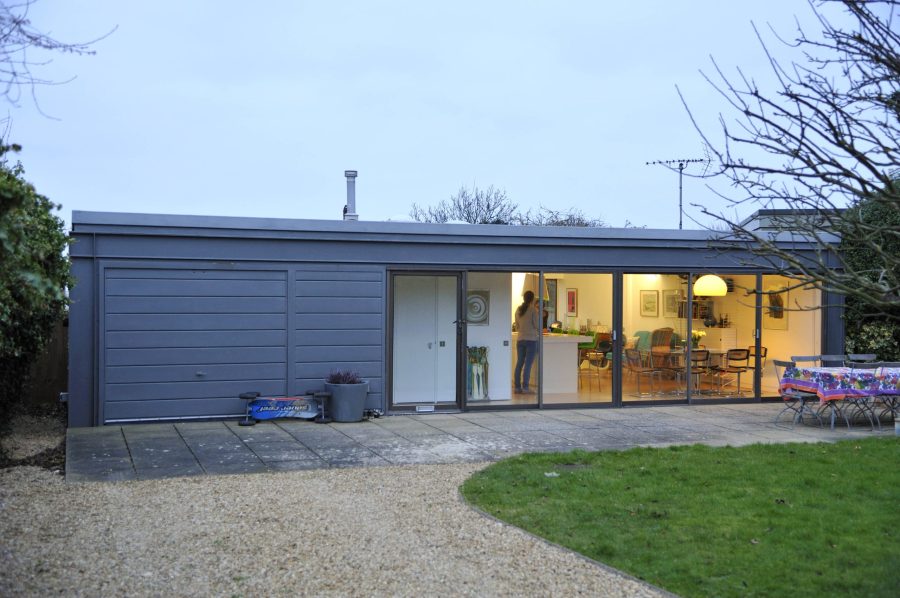 ‘People thought we were bonkers when we told them we were buying this house,’ says Hannah Bent, as she sits at her vintage Habitat dining table in the heart of their newly renovated holiday home. ‘There is still a real stigma against modern design in this country. A friend of ours came to see the property and asked us what we were going to build once we’d knocked the house down. They didn’t understand that it was the house, not the plot, we were after.’

Hannah and her husband Tim had, in fact, admired Bramley, a single-storey Seventies building designed by Robin Spence, for many years. ‘We used to holiday in Old Hunstanton in our twenties, and would wander down this street just to see this house. It always looked so intriguing and unusual – unlike anything else in Norfolk,’ explains Tim. ‘We couldn’t believe it when it came on the market. I had signed up for notifications from Rightmove, as we were looking for a beach hut in the area, then one day, ping! – we got an alert to say Bramley was for sale. It came bang in the depths of the country’s financial depression, just when we were all worrying about money, and we thought, why now, of all times? But we’d loved the house for so long, we decided we just had to go for it.’

The couple bought the house in 2010, saving it from likely demolition. ‘It’s not a listed building,’ says Hannah. ‘And the other people who tried to buy it planned to knock it down to build a bigger property. It’s a large plot in a very sought-after street, so if their sale hadn’t fallen through, allowing us to step in, it would have been the end of Bramley.’

They spent the following year lovingly renovating the property and carefully sourcing furnishings from the same era. ‘It was very important to us that we kept everything authentic, from the flooring and the paint, to the door handles and the heating. We made contact with the architect Robin Spence, who still has a practice in Shoreham, and he came to visit, bringing with him the original plans, to offer us his expert advice.’

‘It was such an incredibly brave house for its time,’ Tim explains. ‘The materials Robin used were radical. The building is a steel portal framed construction, a style of design Robin picked up when he practised in America. The whole house is made on a grid, so that it could be reconfigured in the future and the roof is a single sheet of fibreglass, like the hull of a boat. As you can imagine, we had a few problems getting a mortgage, as it was a non-standard construction, but with Robin’s original plans, we were able to answer all of the lender’s questions.’

STAYING TRUE TO THE ORIGINAL

Robin informed them that many of the companies who’d supplied the original fixtures and fittings were still trading. Although they had to completely replace the galley kitchen, they were able to use cupboard handles that match all the original handles in the house, made by Allgood, the same company who supplied them in the Seventies. They replaced the flooring, but with a new version of the original cork tiles from Siesta, and they repainted the exterior of the building with Teamac Micaceous Iron Oxide paint, which was used when the building was first built.

When it came to furnishing the house, the couple wanted to stay true to mid-century style. ‘It was odd,’ says Tim, ‘because we put some furniture in here just so we could sleepover before all the work was finished, and nothing that wasn’t of this era worked.’ As antiques dealers, the pair had a head-start in finding the modern-vintage items they wanted. ‘Although we trade in a different period, more Edwardian and Victorian,
we’d been collecting mid-century furnishings and art for a while and had been helped by friends who dealt in that era.’

They trawled eBay, specialist markets and auctions to find as many original and vintage items as they could, buying an Eames chair from Christies and Tim’s father, also an antiques dealer, found the G-plan sideboard that now graces the living room. The Patrick Caulfield print was a house-warming gift from Tim’s parents. They even picked up an original Snoopy model from a local market for the children’s bedroom. These were supplemented by modern editions, such as the green Robin Day Polo chairs they bought from Loft and the String shelving units, supplied by Haus in Hackney. One of the hardest things to find,’ Hannah says, ‘was the toys.’ She points to the Newton’s Cradle that once stood on office desks across the country. ‘You’d think things like this would be everywhere.’

As you walk around the house, you get a sense of a generation striving for modernity. It’s hard to imagine the under-floor heating, the exposed steel girders with hidden lighting, the soundproof sliding door that disappears into the walls to create a third bedroom, the open-plan living space, with floor-to-ceiling glass doors that can be opened to let the outside in, were all conceived more than 40 years ago. The designers of the post-war era were the founders of what we now know as contemporary design, and, for that reason, their value is now being recognised.

For Tim and Hannah, the renovation is both the realisation of a dream and the beginning of a new love affair. They both holidayed in Old Hunstanton as children, and now their two children, Ned and Martha, are enjoying the simple pleasures of sprawling sand dunes and a small, friendly community. But they have also found the simplicity of the design in their new holiday home so calming and relaxing that they plan to sell their Victorian house and move into another early Seventies property. ‘There’s no going back,’ says Hannah. ‘Once you’ve experienced the serenity of living in a space like this, nothing else will do.’

You can book a stay at Bramley through Norfolk Hideaways (01485 211022, norfolkhideaways.co.uk). For more information about the area go to visitnorthnorfolk.com

Tim and Hannah's tips for furnishing a modern vintage home

BUY WHAT YOU LOVE
Get to know a couple of dealers before you start to invest in pieces. Some of our favourites are Caroline de Kerangal (cdkantiques.com), Fears and Kahn (fearsandkahn.co.uk), Mark Hill (markhill.net) and Tim Smith-Vincent (timsmithvincent.co.uk).

DO YOUR RESEARCH
Subscribe to Midcentury Magazine (midcenturymagazine.co.uk). It’s a beautifully curated publication full of ideas. Visit Kettles Yard (kettlesyard.co.uk) in Cambridge where there is a stunning collection of Modern art and antique furniture.

BUY ORIGINALS
Save up and buy an original licensed piece or better still a vintage version, which is often less expensive than a new version. It’s much more satisfying to own an original and these will be the heirlooms of the future.

WHERE TO BUY
There is a really good Fair held at Dulwich School organised by Modern Shows (modernshows.com). It’s the biggest gathering of mid-century dealers and their website is a great resource. Newark Antiques Fair (iacf.co.uk) is the largest in Europe and a wonderful place to rummage. TW Gaze (twgaze.co.uk) in Diss, Norfolk holds a regular Design Auction.