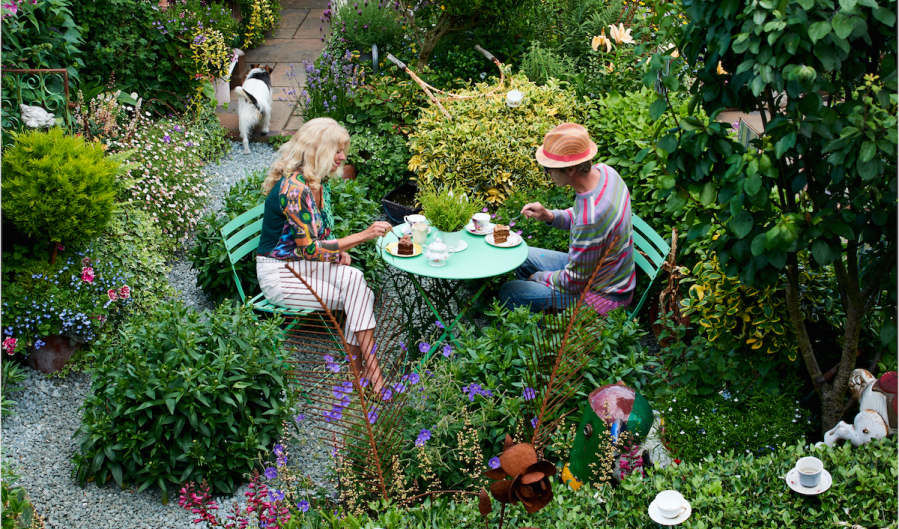 ‘I never set out to create a garden, or open one – or to raise money for charity – it just happened,’ says Geoff Stonebanks, owner of the award-winning Driftwood Garden in East Sussex. As the name suggests, this small yet character-packed plot overlooks the sea. From a raised vantage point, it has views across the shingle strand of Seaford to the English Channel, where passenger ferries scoot along the horizon. Accordingly, a shoreline influence suffuses its whole design – from the boat moored in the seaward-facing beach garden surrounded by coastal plants and dune-like grasses, to the pebbles and driftwood sculptures dotted throughout the outdoor ‘rooms’, where Geoff also serves tea and homemade cake to the hundreds of visitors that come each year.

Indeed, Geoff’s baking is almost as big a draw as his inventive plantsmanship. With a professional background in catering (he worked for the BBC and Royal Mail before retirement), he is a prolific baker – making classics, such as lemon drizzle and coffee and walnut cakes, along with savoury muffins. ‘I’ve cooked and served 5,500 portions of cake, and I’m still not sick of it,’ Geoff laughs. What adds to the visitor experience is the presentation: cakes are displayed under glass domes or on tiered cake stands, and served on vintage china at tables and chairs set in the garden. In addition to entrance fees, the kitchen is one of the ways Geoff raises funds for good causes – since first opening to the public in 2009, he has raised more than £76,000 for charity, more than half of this for Macmillan Cancer Support.

BESIDE THE SEASIDE
Today, Geoff credits a lot of the garden’s popularity to its location: ‘I think it’s the coastal aspect that attracts people,’ he says. However, when he and his partner, artist Mark Glassman, first decided to move out of London in 2004, Geoff – who had always enjoyed maintaining his garden in Barnet –wasn’t sure he wanted to set up home in an exposed, seaside spot. ‘From a gardening perspective, I never wanted to live this close to the sea,’ he says. Mark wanted to be in Brighton, though, which is what led them to house-hunt in the area. ‘We looked at 140 houses between Littlehampton and Eastbourne and this is the only house both of us liked,’ recalls Geoff. The 1930s property had a sloping, 100ft-by-40ft rear garden (tapering to 20ft at its narrowest point), and a smaller front area, both of which were mainly laid to lawn.

When a garden designer failed to come up with a plan he liked, Geoff felt inspired to have a go himself, creating level areas of interest in the back garden, the first of which included a summerhouse (called ‘Dad’s Place’, in memory of Geoff’s late father, also a keen gardener). From this, Geoff developed the idea of dividing the outdoor space into individual rooms, which also enabled him to build up boundary hedges or windbreaks to sustain more delicate plant varieties.

The centre of the garden – which features a sculptural Butia capitata palm, along with an anchor and coils of maritime rope on a gravel bed – is bounded by protective railway sleepers, laid by Geoff. The footpath down the middle, meanwhile, is edged with Grissolina littoralis, which he describes as a ‘good coastal hedge’. Towards the house is another shelter-belt composed of Olearia haastii ‘Tweedledum’, mixed with Pittosporum tobira, behind which he has succeeded in growing cottage garden-style blooms, such as Shasta daisies and geraniums.

The dense style of planting provides additional support for the vulnerable annuals, of which Geoff buys up to £800-worth a year, to complement the 1,000 plants already in the garden. Some are grown through hoops, to keep them upright, and a great deal in the rear site are in pots so that they can be moved from one spot to another if they fail to thrive. The more exposed section to the front of the house has been planted with hardy coastal species that are adept at shrugging off the salt-laden gales, such as sea buckthorn, sea lavender and sea kale, accompanied by drifts of up to 10 varieties of grasses – Stipa tenuissima, or ponytail grass, is Geoff’s favourite. Acanthus mollis ‘Bear’s Breeches’ and Verbena bonariensis bring both height and colour to the mix. 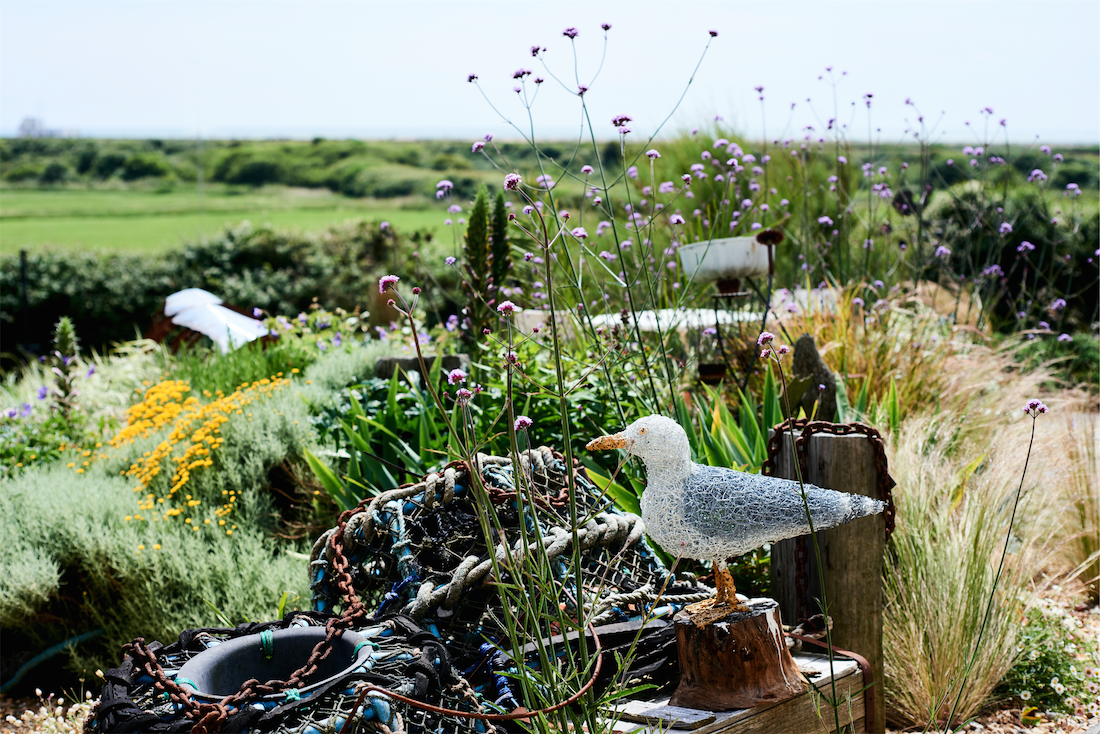 WHERE THE ART IS
What gives Driftwood further structure and visual appeal are the many artworks and curios that are displayed in and amongst the foliage. After their first opening for Seaford in Bloom in 2009, and subsequently for the National Garden Scheme, Mark – who has his studio in the garden – also wanted to show his paintings in this setting. This led to them becoming involved in the local Artwave Festival, and now during three weekends in late August to mid-September, they exhibit the work of 14 painters and sculptors (including Mark), and sell up to £12,000-worth of art.

Among permanent features are a rusting metal arch by artist blacksmith Alex Moore and a skeletal metal cod by Brighton sculptor Chris Brookes. Geoff has added his own innovative touches: he found a vintage rocking horse in a junk shop, which now appears to ‘vault’ over one of the boundary hedges. He has also installed an outdoor fireplace – with Begonia ‘Burning Embers’ flourishing in the grate – beside which he has planted up the seat of a chair (found at the tip) with vibrant lobelias and gazanias. ‘It’s amazing what looks good here,’ he says, relating how he has even found a home for the wing tip of a Boeing 737, which he picked up for a fiver at Shoreham Airport. ‘I get these zany ideas, which people can recreate in their own garden.’

Also included are family heirlooms, such as a fish basket from Geoff’s father’s and grandfather’s working life at Fleetwood. (Both Geoff and Mark have roots in Cleveleys on the Lancashire coast.) Some of the plants have come from family members, too – two standard bay trees and several fuchsias belonged to Geoff’s late Auntie Margaret – as did Hector the tortoise, believed to be around 80 years old, who has his own dedicated living area near Mark’s studio. 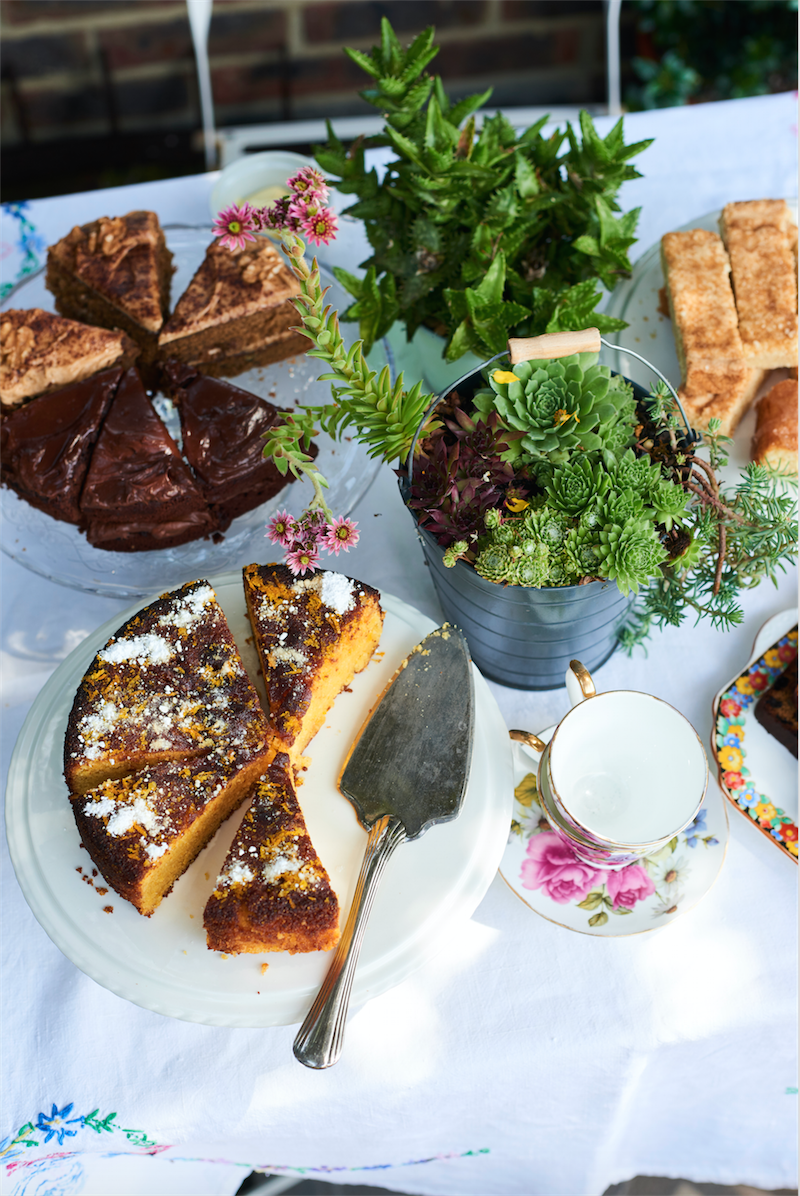 THE ICING ON THE CAKE
Maintaining the garden is ‘a full-time job’, says Geoff, and from May to October, during which time Driftwood opens for the NGS, the Mayor’s Open Gardens, the Macmillan Coastal Garden Trail, Artwave and by appointment, he and Mark do not have a break. But despite the hard work involved (Geoff does all the gardening and baking himself) the results have been life-enhancing. To date, 14,785 people have visited Driftwood, it has appeared on TV, while also being garlanded in prizes, both locally and nationally, for its inspired planting and fundraising.

After retirement, Geoff has clearly found his true calling by developing this coastal garden. ‘I won’t say I sit back on my laurels,’ he says, adding that he makes changes to the layout every spring so visitors have something new to see the following year. ‘But when you see the nice things that people say in print or on social media, you’d be a bit cold if you didn’t feel some kind of buzz from that.’ And whether people come for the plants, the art, or the delicious tea and cake, they are rewarded with a beautiful place to spend time by the sea.