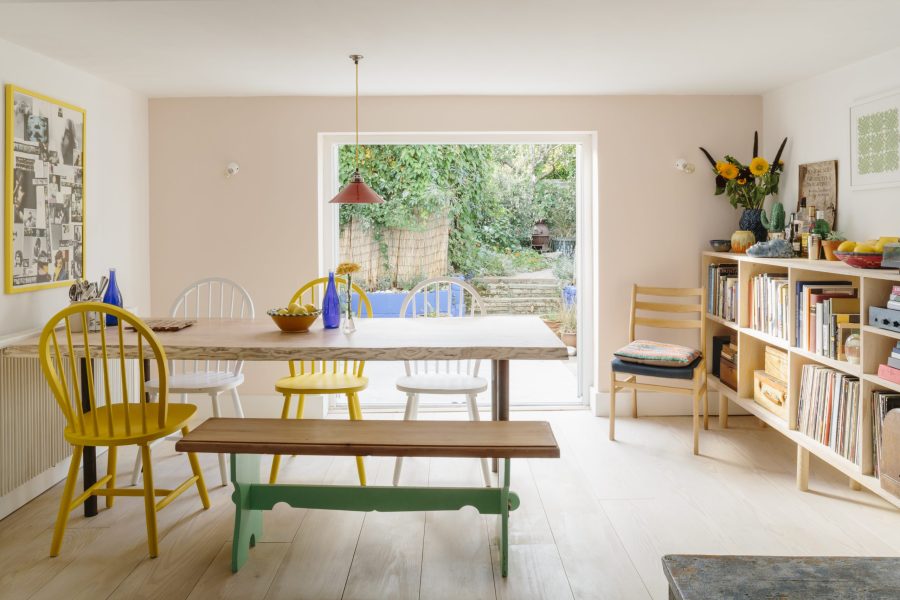 Joe and Emily Reilly left London to set up an architecture and interior design business in the coastal village of St Agnes in Cornwall – renovating their own cottage along the way. WORDS ALICE WRIGHT, PHOTOGRAPHS ANYA RICE

‘Our working day often depends on what the tide’s doing,’ says Joe Reilly, who heads into the waves for a morning surf whenever possible. Alternatively, the couple might take their baby son Ozzy for a stroll along the coastal path before firing up their laptops. It’s a far cry from their previous 45-minute commute through London, and it was a desire for a radical shift in lifestyle that inspired Emily and Joe to quit their jobs in the capital and move to Cornwall. Freed from the nine-to-five routine, they now set their own hours, influenced by the rhythms of the sea and seasons.

Joe, an architect, and Emily, an interior designer, grew up in Leicestershire and Dorset respectively before heading to London, where they met. But after several years there, they began to tire of city life, and fell in love with St Agnes on holidays together in Cornwall. Aside from its enviable position on the North Cornish coast, the village’s vibrant year-round community appealed to the young couple. ‘There are so many passionate, interesting people here, living an amazing quality of life, and we wanted a slice of it,’ explains Emily. So in 2016 they decided to move down and set up their own business, Coal Cornwall. 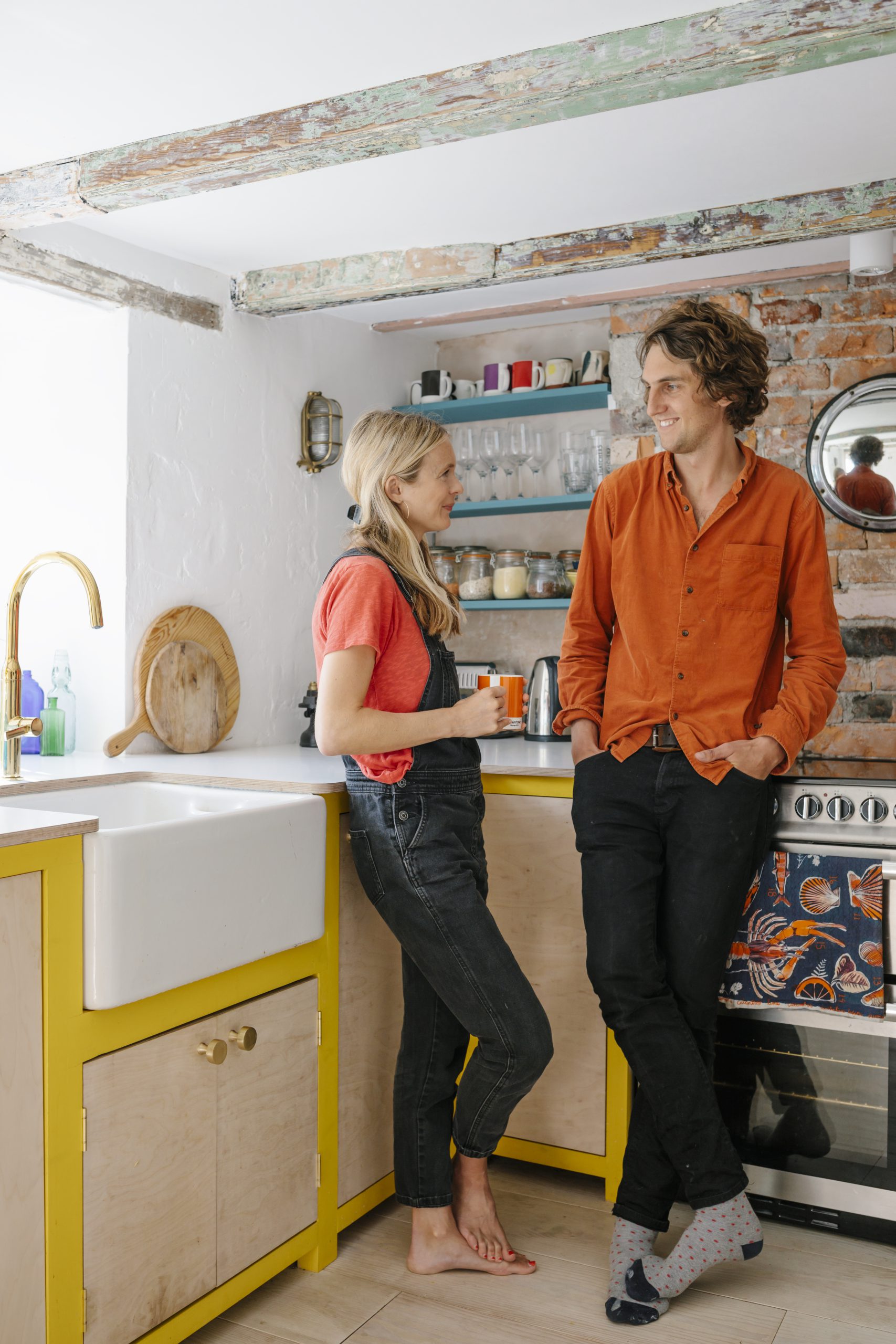 Searching for properties online, they knew they wanted a home within walking distance of St Agnes and the sea. The first place they saw was a two-bedroom terraced cottage in the hamlet of Goonbell, on the outskirts of St Agnes. The surrounding area has a rich mining history and the lane running along the front of the house was once the route to the local tin mine. Although charming, like many of its type, the building was rather dark and cramped. The previous owners were an elderly couple who had lived there for 30 years, and the interior was ‘fairly grim’, according to Emily.

A PUNCHY PALETTE
Seeing its potential however, they bought the cottage and set about transforming it. Two years on it’s a much lighter, more modern space that sings with colour, but retains the property’s original character. Downstairs they’ve removed a wall and arches that had split the kitchen and living areas. They put in a new kitchen, exposed and re-positioned the previously boxed-in stairs, and moved the boiler that was above the stairwell to give more height. They also demolished an old conservatory to let in more sunlight and make the courtyard garden a little bigger. 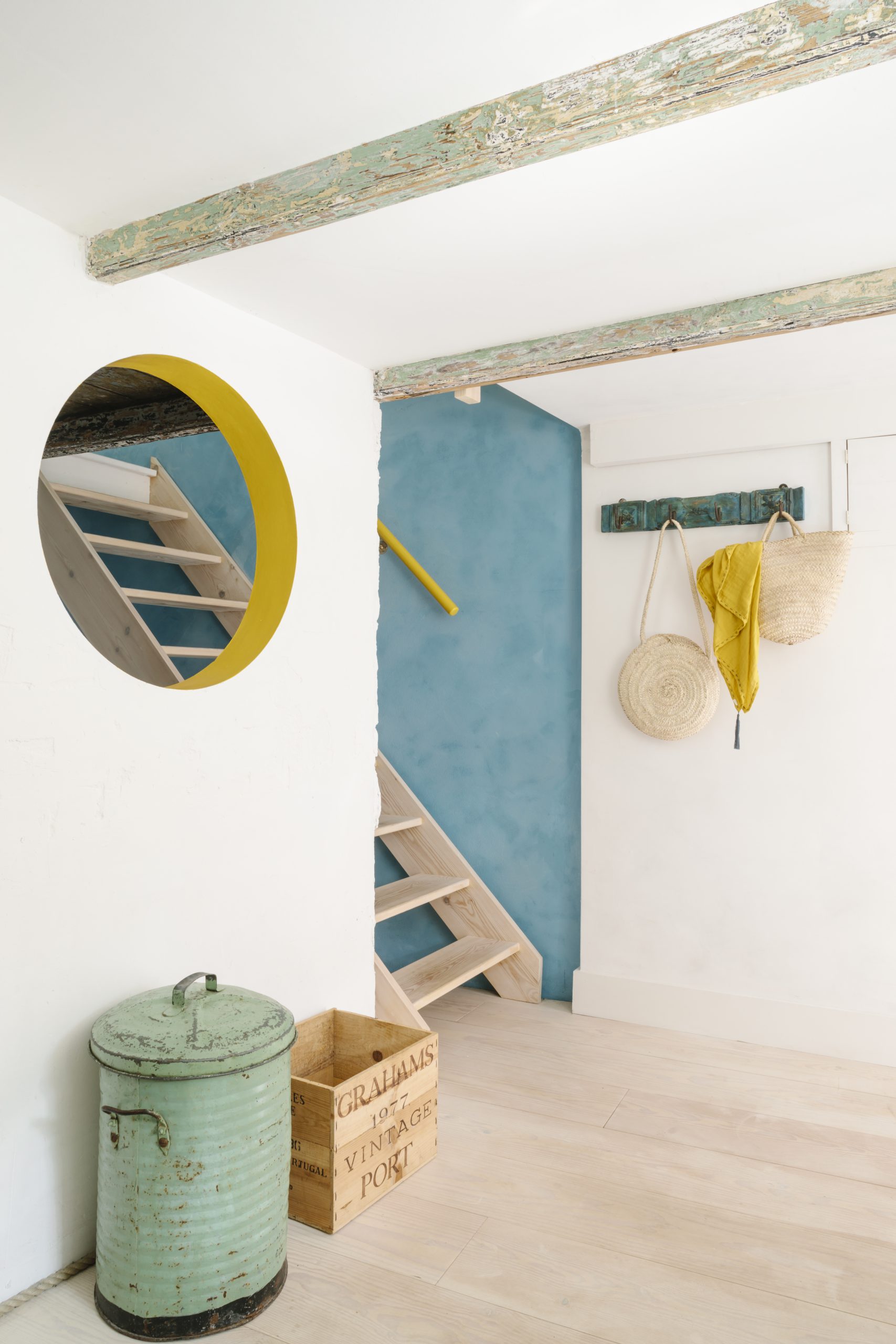 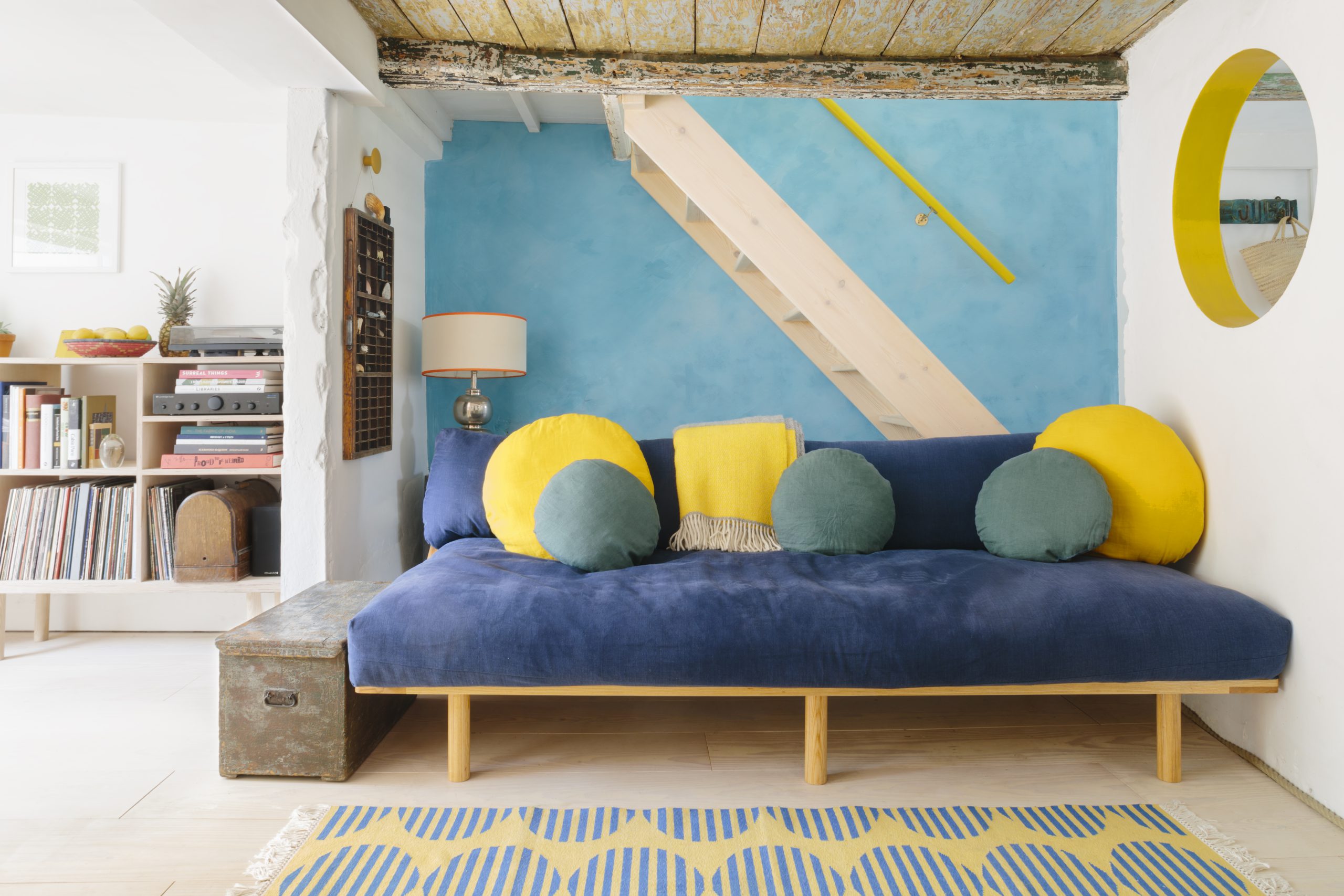 Upstairs the pair expanded the master bedroom, borrowing from the bathroom – which they have converted into a shower-room with a generous skylight. The bedroom now boasts a dramatic freestanding pink bath and they’ve installed a large yellow-framed window, sourced from Danish company Velfac, which faces west towards the sea. They don’t quite have a sea view, yet the Atlantic makes its presence known. ‘You get a sense of it,’ says Joe. ‘Especially when it’s stormy and the skylight and bedroom window get battered.’

Emily and Joe have brought the coast indoors using colour, with the sea and the yellow gorse that carpets the North Cornish coastline providing the starting points for a striking palette of blues and yellows. Emily wanted to step away from the muted tones often associated with coastal décor, looking instead to the vivid natural hues of the local landscape – from the ever-changing sea to the bright mineral colours running through the rocks.

LET THE LIGHT IN
They painted the wall by the stairs in a turquoise lime wash by Bauwerk. ‘The colour is called Copper, and it’s inspired by the vibrant copper ore pigments seen in the rocks around Trevaunance Cove and Trevellas,’ explains Emily. Its textured surface intensifies the colour. The play of light throughout was an important consideration – while some walls have a matt finish, they chose high gloss varnish for the yellow accents and the blue shower-room wall to provide contrast and to bounce and reflect light. 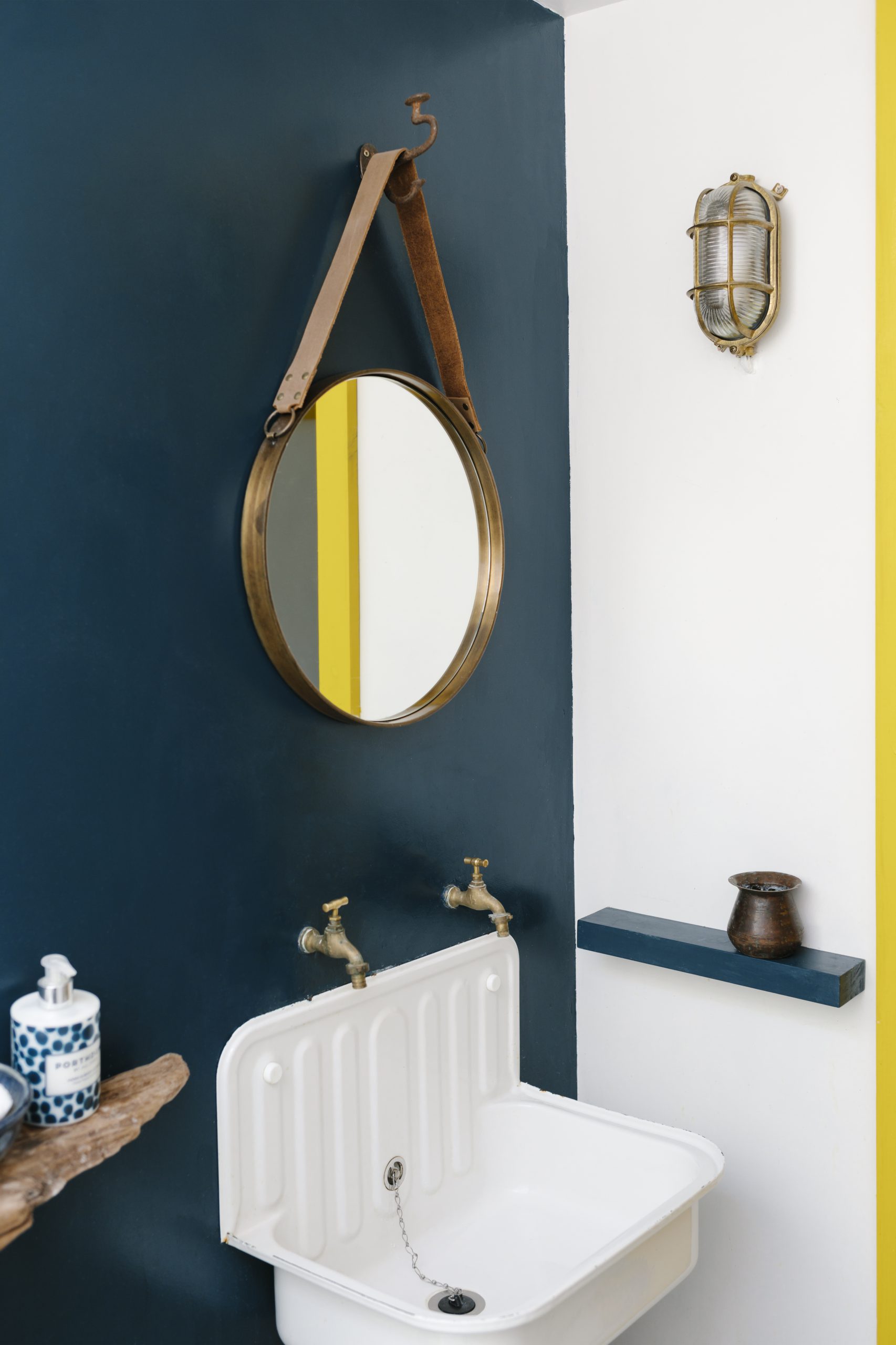 Although Emily and Joe had a vision before they began work, they adapted to the building as it revealed its unique character. They had intended to paint the ceiling beams downstairs white, but after stripping them back decided they preferred the worn, exposed wood below. Other decisions were inevitably influenced by budget – they wanted to take out another wall downstairs but discovered it would be too costly and complex. Instead they punched out a circle to open it up, painting the rim in yellow gloss. It’s now a feature they love.

The couple hired a builder initially, but a limited budget of around £25,000 meant they had to pitch in and do much of the work themselves. Their skills were put to good use designing and fitting the kitchen, which was made from large pieces of cut-to-order plywood. They used the same system to build the plywood storage unit in the dining area. Other jobs, such as levelling the floor downstairs and laying the Douglas fir floorboards, were more challenging. ‘We watched a lot of YouTube tutorials,’ they laugh. 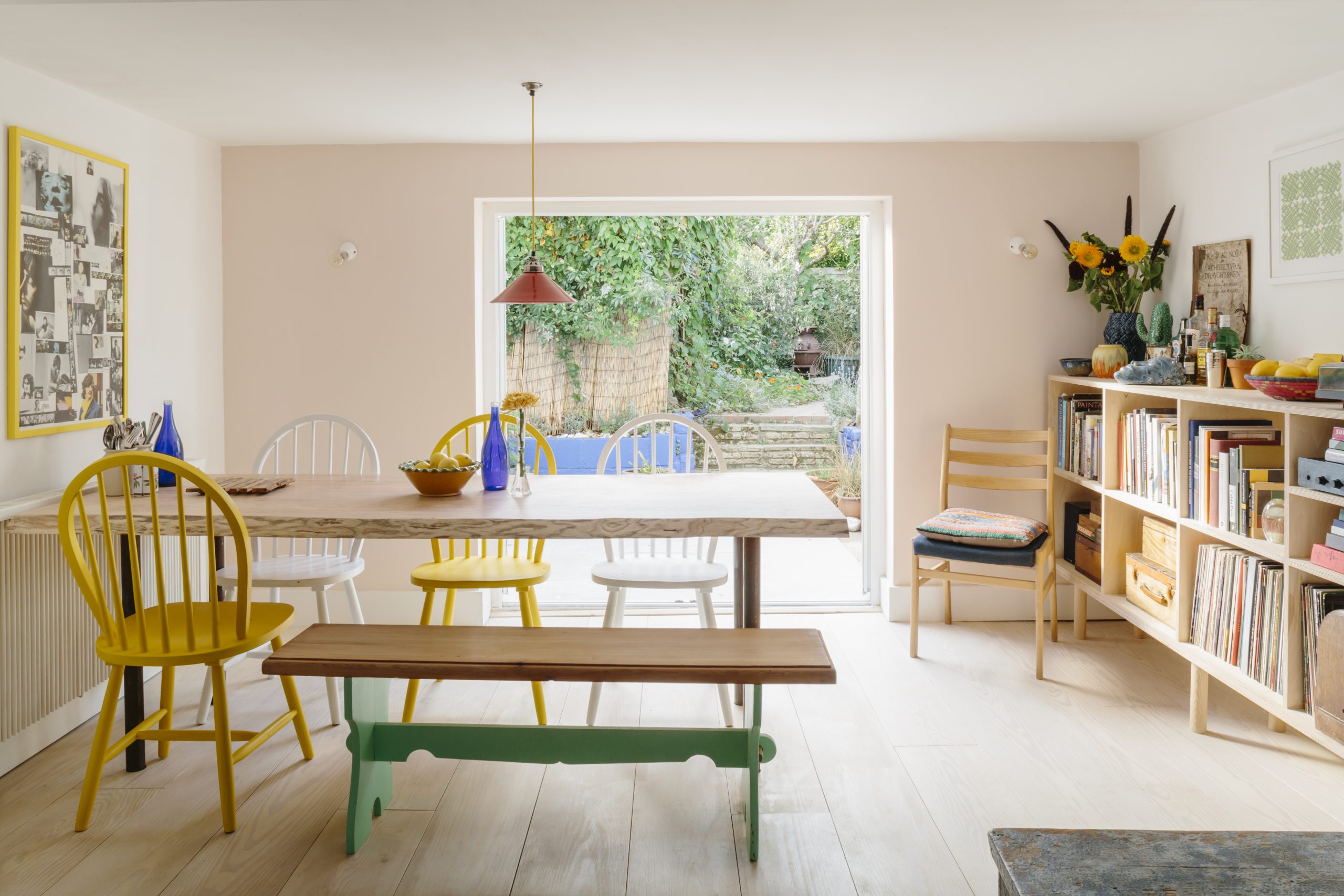 Some furniture, including the kitchen chairs and bedroom wardrobe, they bought cheap and painted, but the pair also commissioned pieces from local Cornish craftspeople. The dining table was custom-made from a piece of ash (bought from a supplier near Camborne), with legs crafted by a welder up the road. The sofa frame was made for them by a local carpenter, and they sewed their own cushions using a cotton blend fabric called Linara in Indigo, by Romo. On a trip to India, they bought colourful handwoven cotton dhurrie rugs, as well as many of the trinkets on their shelves.

A BALANCED LIFE
At the same time, Joe and Emily started to win clients for their business. They have a steady stream of work, from planning drawings to interior design commissions. Their dream is to see one big project through from start to finish, but they’re happy with how the business is growing. ‘And it’s much more enjoyable here,’ says Emily. ‘Clients are friendlier and more relaxed. And at the end of the day we go to the beach to unwind.’

That work/life balance became ever more important in August 2018, when Ozzy was born. Working for themselves meant Joe and Emily could be very present during his early months. And village life is just as they hoped. ‘The sense of community that we felt here was a huge part of choosing St Agnes,’ says Emily. ‘Everyone is so friendly and welcoming.’

It seems they’ve achieved the relaxed coastal lifestyle they dreamed of during those long London commutes, and they’re excited to share it all with their little boy. ‘He’s going to have an awesome life,’ says Emily. Joe adds: ‘It’s absolutely been worth making the move. Being able to set our own hours and to be around for Ozzy – you can’t really put a price on that.’