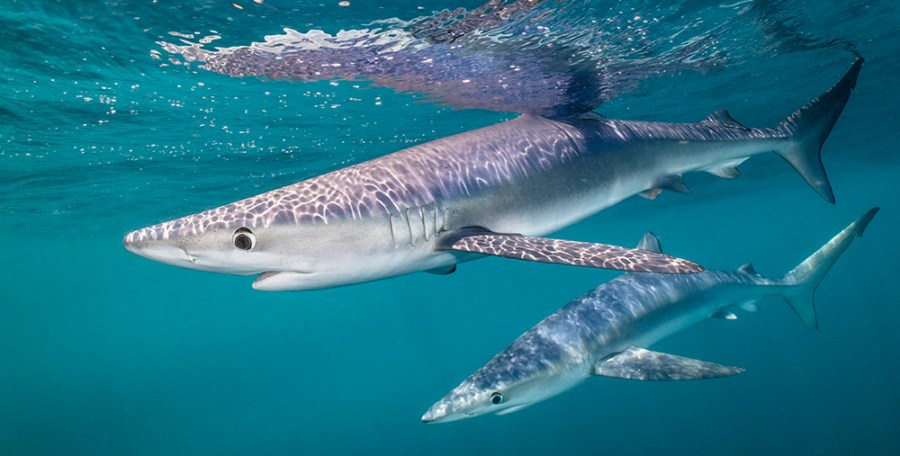 Blue sharks roam the seas looking for food and company, and feast on sardines and squid off the south west coast. Cornwall is one of the best places in the world to watch sharks, and even swim with them.

Words and Photographs by Henley Spiers

When it comes to great wildlife encounters, most of us are likely to dream of visiting destinations far away from our home shores, yet the waters of the British Isles are frequented by many charismatic animals. And, for a few months every summer, one of the most beautiful sharks in the world takes up residence off the Cornish coast. Even better, anyone can go to visit and swim with them there. 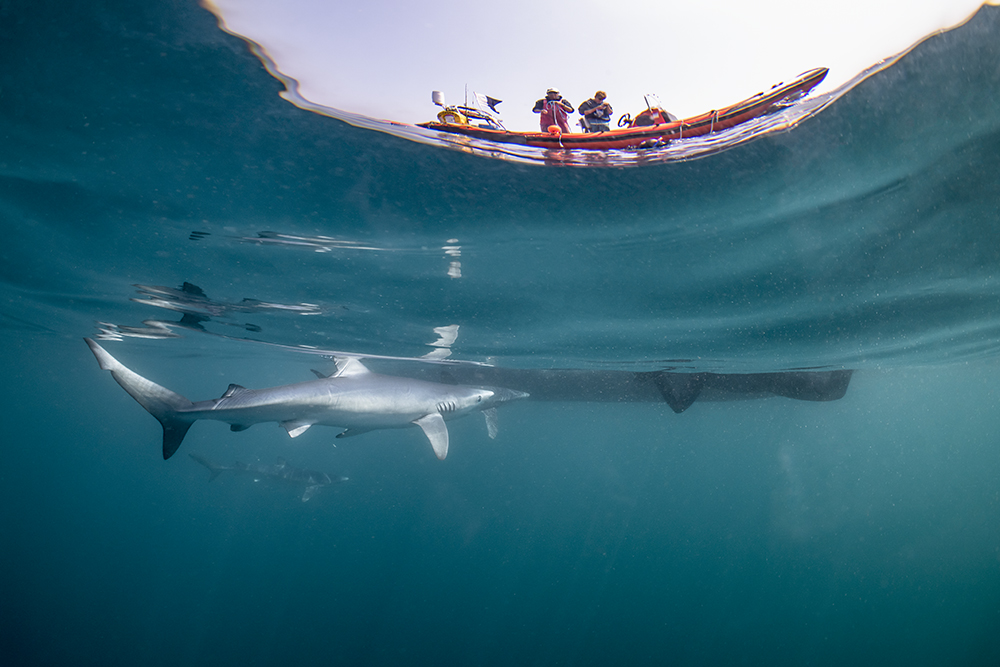 The idea of swimming with sharks may sound alarming, however a lot of that apprehension is derived from a misconceived portrayal of these creatures. Jaws may have been one of the best ever summer blockbusters, but this film also played a devastating role in the way we view sharks today. The author of the book the film is based on, Peter Benchley, would eventually become so racked by the guilt of his portrayal of sharks in the novel and films that he became an ardent shark conservationist.

DISPELLING SHARK MYTHS
I remember on my first encounter with a docile nurse shark in the Caribbean, my heart thumped as imagined scenarios played out in my mind – the bottom-dwelling shark simply carried on with its sedentary life. Since then, a career as an underwater photographer has brought me into close contact with a host of shark species, and dispelled many misconceptions. Sharks are not out to get us, and while they should be respected – like any animal they may react if threatened – the hardest part is usually getting close enough to these surprisingly skittish animals. Humans are responsible for the annual slaughter of an estimated 100 million sharks, so the most pressing issue now is how much they have to fear from us, rather than the other way around. 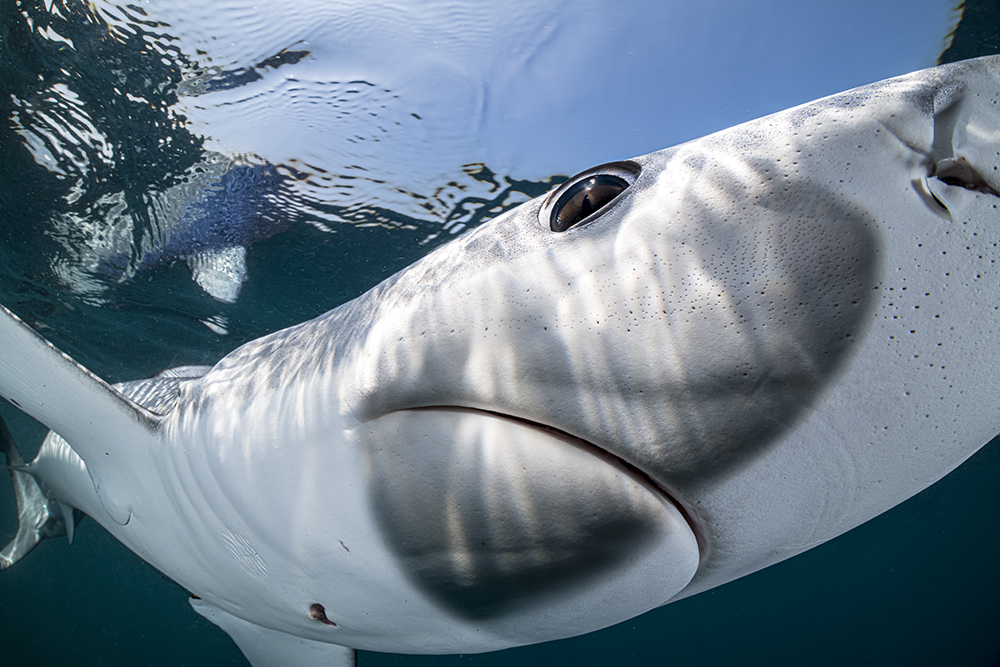 PERFECT CAMOUFLAGE
Back to blue sharks in British waters. These nimble creatures are a pelagic species, meaning that they roam vast swathes of the ocean in search of food and company. Their lithe bodies and oversized pectoral fins allow them to cruise over vast distances. The open ocean has been accurately described as a blue desert, where finding food is an arduous task, but blue sharks are equipped with a full complement of specialist features to help them thrive in this environment. Counter-shaded bodies, blue on top, and white beneath, allow for seamless camouflage when seen from above or below. A keen sense of smell and electromagnetic receptors on their snout allow them to find and investigate potential food sources for miles around. While they can cruise with minimal energy expenditure, with a burst of acceleration they quickly transform into one of the ocean’s fastest fish. 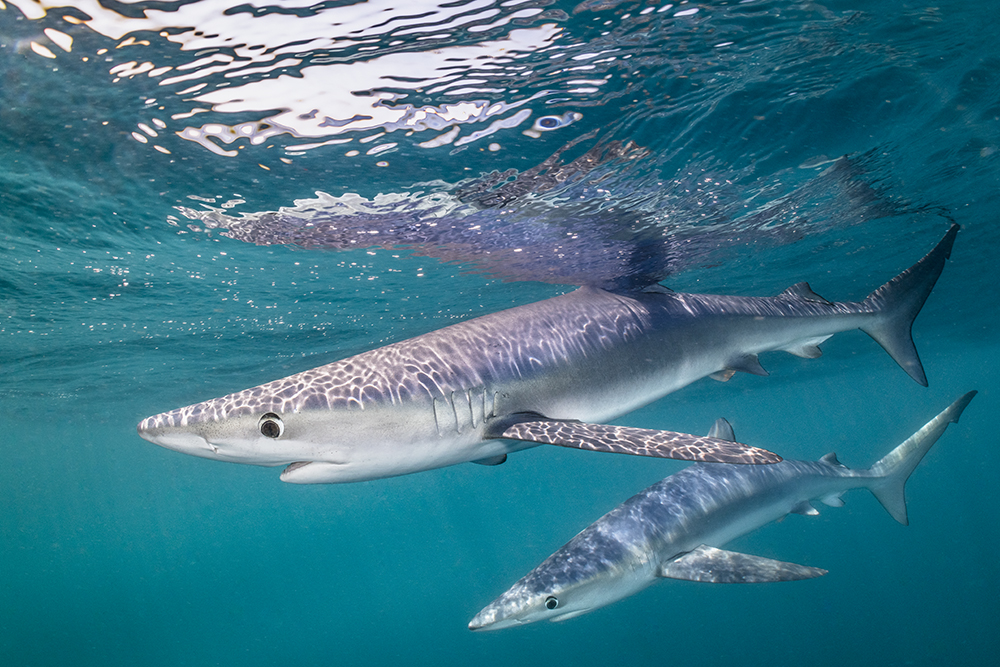 Food can be so scarce in the pelagic zone that creatures must cross oceans in search of sustenance and, in late spring, a population of blue sharks is believed to cross the Atlantic for this very reason. Setting up temporary residence off our south west coastline, they are attracted by the presence of sardines, squid, and mackerel.  Charles Hood of Penzance spent his career as a photojournalist searching for sharks the world over, including blue sharks. Eventually, he decided to try and encounter them closer to home. His record of finding them is remarkable, the result of years of trial and error, and today he is known in Cornwall as ‘the shark guy’. With Charles I have made the pilgrimage out to see the blues on several occasions, but even so, every trip feels like a new adventure.

BLUE TERRITORY
We travel over 12 miles offshore, to the blue shark feeding grounds. We’re now in the right place, but the sharks are in the depths, far beyond the reaches of snorkelling or diving. Charles chums the water with a carefully conceived dose of fish blood, guts, and parts. The idea is to intrigue the sharks just enough that they pay us a visit, but not to provide them with a proper meal. On some days, the blues appear quickly, on others, it can take hours of waiting. Sitting on a bobbing boat with the smell of the chum is not for the faint-hearted, but I did say this is an adventure, and the reward is well worth the hardship! 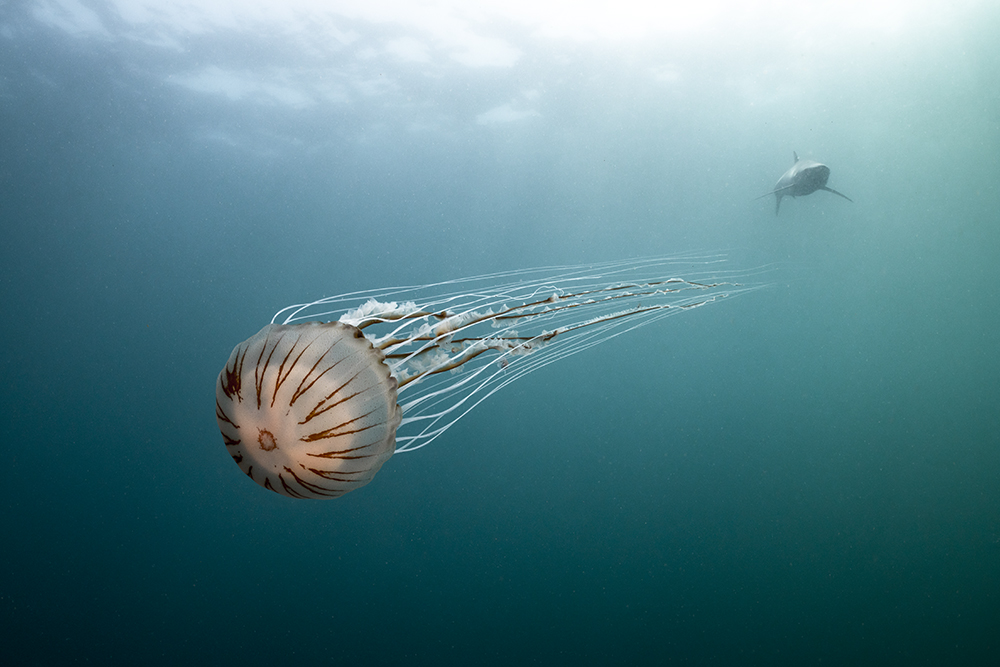 The first shark fin to break the surface sets off a wave of excitement, and we watch eagerly as the blue shark follows the trail right to the boat. These sharks live up to their name, with a beautiful blue finish on their upper bodies, iridescent up close, but blending in perfectly with the ocean from a distance. The sharks come right up to the surface, so those unsure about getting in the water can enjoy the spectacle from the boat. Blues can reach up to four metres long, but those encountered off the Cornish coast tend to be around one-and-a-half to two metres long. They are almost all female, a fact which has local marine scientists scratching their heads. I suppose you could say that they are ‘just right’ for a first time shark encounter, impressive and yet not too intimidating from a size perspective. Blue sharks are unusually social, being one of the few shark species that migrates as a group.

Dropping into the water, I’m immediately visited by a blue shark. It makes a close pass, coming within inches with its snout. This is not an act of aggression, just curiosity, and the sharks will on occasion bump their sensory-laden noses into you. Without the use of hands, sharks will often use their noses to check things out. Moreover, pelagic sharks, such as these blues, are used to operating within the blue desert, where anything unusual merits investigation. That first pass will likely get your adrenaline surging, but it’s important to remain calm and composed in the water. As the sharks conduct loops around snorkellers and the boat, you will quickly grow used to their behaviour. Soon enough, time will fly and you’ll realise that you are happily sharing the water with several blue sharks! As well as their attractive blue coats, these sharks have oversized, soulful eyes, making them about as cute a shark as one could hope to meet. 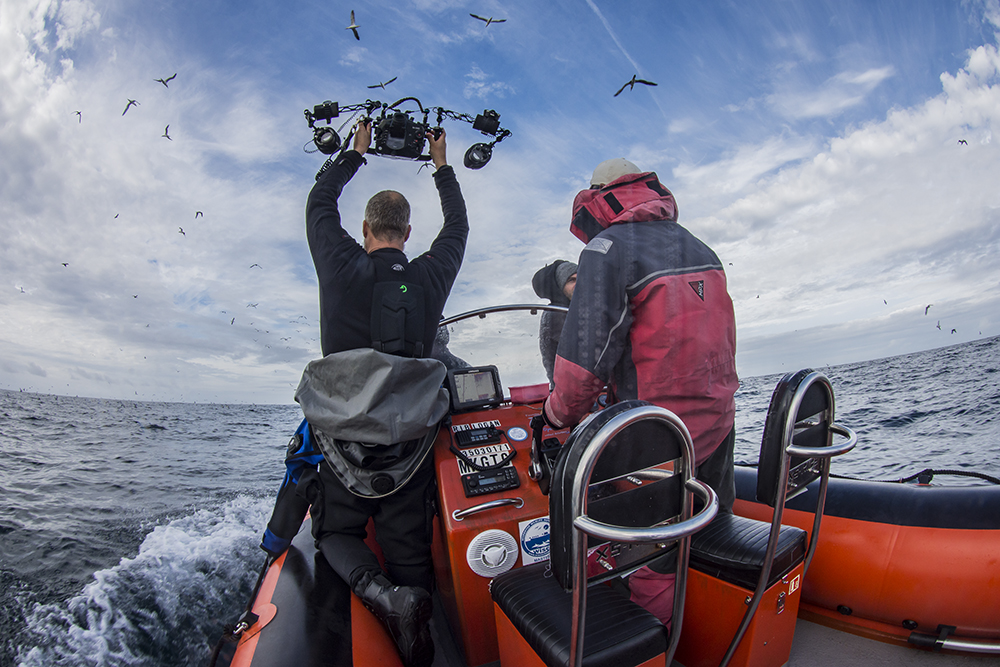 BOOK A BLUE SHARK BOAT TRIP
Cornwall has now become one of the very best places in the world to see blue sharks, presenting an incredible wildlife opportunity on our doorstep. Pay them a visit and give these misunderstood animals a chance to show a reality far removed from Jaws. Run by ‘the shark guy’, Charles Hood, a full day boat charter on a RIB accommodating up to five – four visitors plus the skipper is ideal – costs £895 (£995 on weekends). It’s wise to schedule more than one day for visiting the sharks to allow for inclement weather when a trip might be cancelled. The season starts in mid-June, ends in mid-October, with peak blue shark numbers usually occurring in late August. There’s a good chance of seeing dolphins, porpoises and tuna too. To find out more details, see charleshood.com.

Read more about shark visits to Devon or subscribe to coast magazine for more inspiration of wildlife and travel adventures around the UK coast.

Read more about shark visits to Devon or subscribe to coast magazine for more inspiration of wildlife and travel adventures around the UK coast.