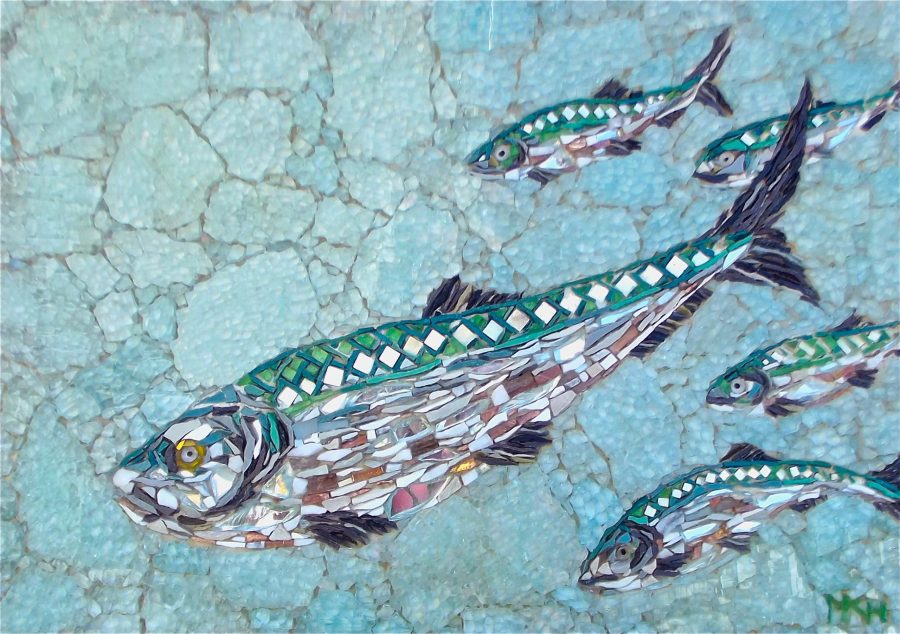 From her garden studio, minutes from the beach at Whitstable, artist Kimmy McHarrie creates traditional, tactile mosaics featuring sea life of all kinds

‘The sea is in my bones,’ says Kimmy McHarrie, who grew up on the Isle of Man inches from the seafront. ‘During stormy weather, the waves came over our cottage.’ In 2003, after living in landlocked Oxfordshire for a while, she and her husband John relocated to Whitstable on the Kent coast to once more savour the sea air. They live four minutes from the pebble beach now, which Kimmy can see from her window. ‘I find the beach very grounding, I go there a lot. Whitstable is less rugged than the Isle of Man and very flat, but I like the “nothingness” of the landscape, where the sea merges into the sky. We have amazing sunsets too.’ 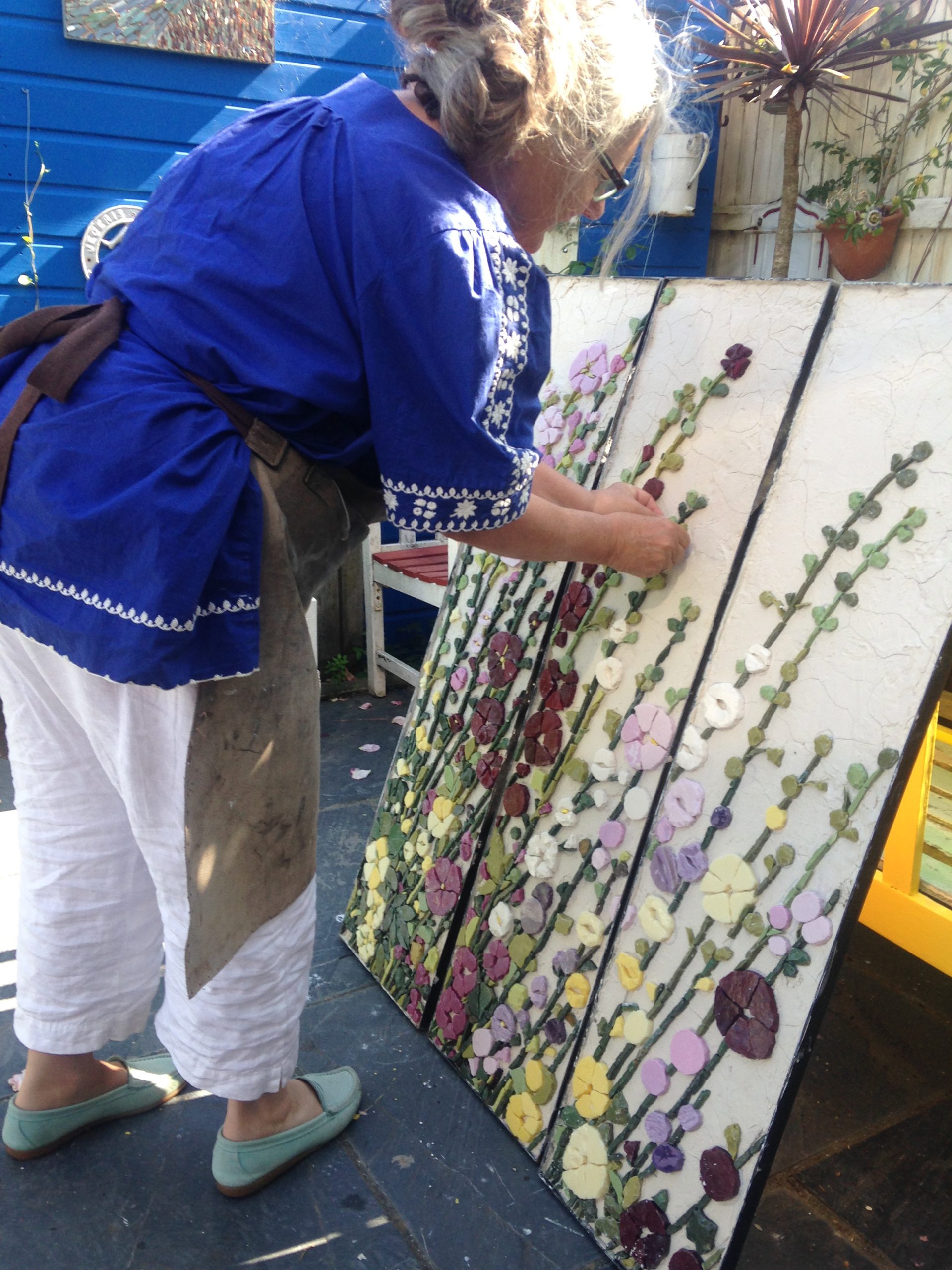 It’s all grist to the mill of Kimmy’s imagination as she captures seascapes and marine life in her traditionally rendered mosaics. ‘What I love about the sea is that it’s another world and we don’t know everything about it. I’m known for my fish. Every day on the Isle of Man I was at the beach, I went out fishing and crabbing with my granddad, so I “think” fish and have an affinity with them,’ says Kimmy, referring to her mosaics of mackerel and anchovies (no two are ever the same) that jostle for attention with dreamy representations of seaweed, zooplankton and gulls. 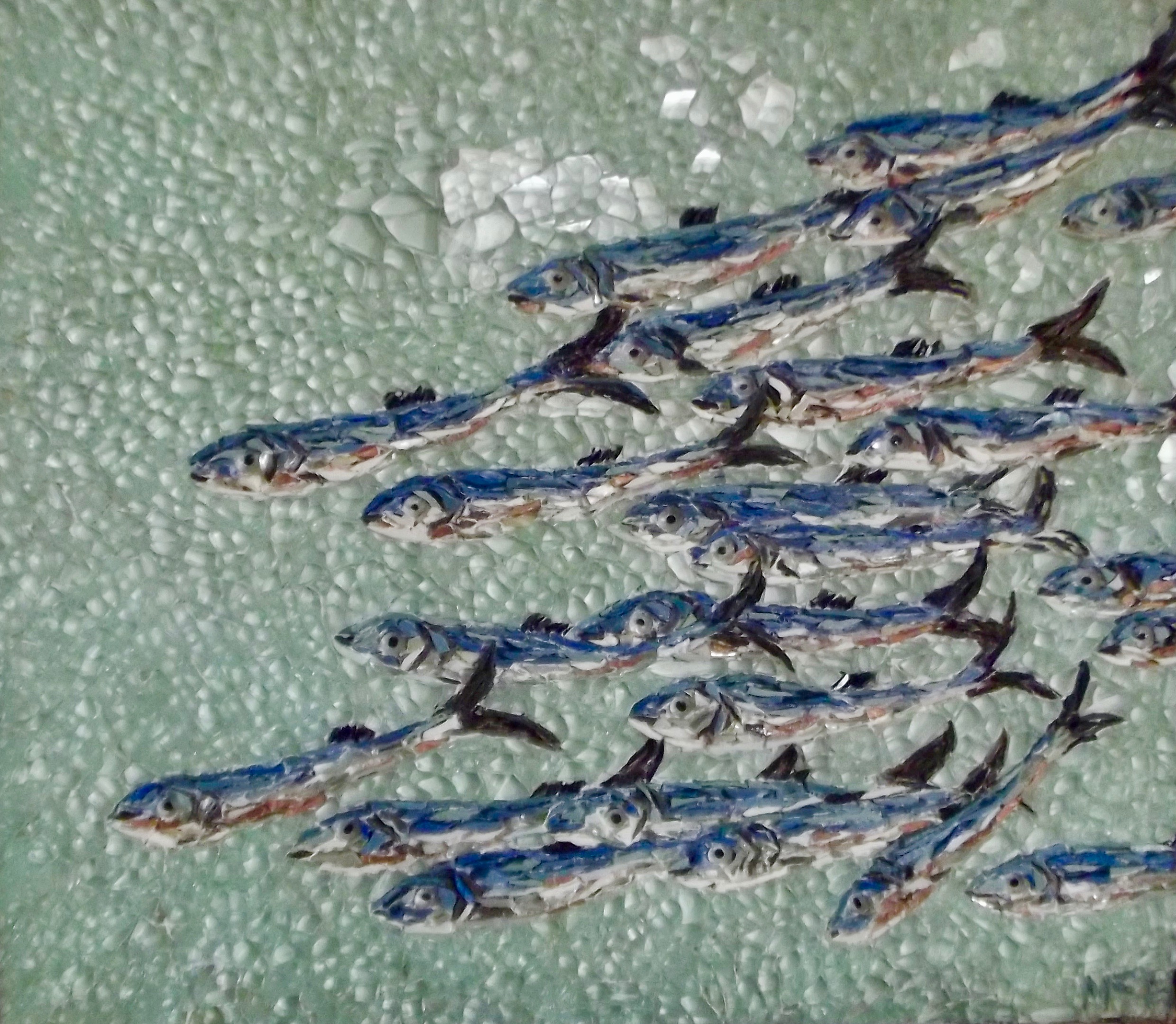 She uses the double reverse method of mosaic-making, which she learnt in 2001 in Ravenna, Italy, the historic centre of Byzantine mosaics. ‘It’s a very physical process involving 10 different stages. I cut each piece of Venetian smalti [coloured glass] by hand using a hammer and hardie, traditional mosaicist’s tools. It is always a challenge to produce mosaics with life from such an ungiving medium, with a limited colour palette, but I try to bring a new approach to this ancient art.’

Working from her studio, an ocean-blue painted garden shed, she builds up the mosaics slowly – large ones up to two metres long can take four months to make, tiny 10cm square ones two days or so. She begins each one with a sketch of the subject, followed by a line drawing to fit the chosen dimensions of the metal frame and to act as a guide as the mosaic comes together. She cuts the glass tile-like pieces (tesserae) as she goes, setting them first into lime putty, then, several stages later, permanently into cement. Cleaned up and ungrouted, the surface and sides of each tessera glint in the light, giving the mosaics a dynamic feel. In the corner of each one is the monogram MCH (for McHarrie), cut by Kimmy from smalti – the modest mark of her rare skills.

FIND KIMMY McHARRIE
• See a selection of Kimmy’s mosaics at kimmymcharrie.co.uk.
• Kimmy’s work can be seen year round in the Blue Cabin at The Sportsman
pub in Seasalter, Kent – one of five new luxury B&B log cabins, with interiors and decoration by Kimmy. You can book The Sportsman or the Blue Cabin on 01227 273370 or at thesportsmanseasalter.co.uk.
• Kimmy is due to exhibit some small pieces in a joint show at the pop-up Show Off Gallery in Whitstable, Kent, from 26 November to 2 December 2020. Check Facebook for more information nearer the time. 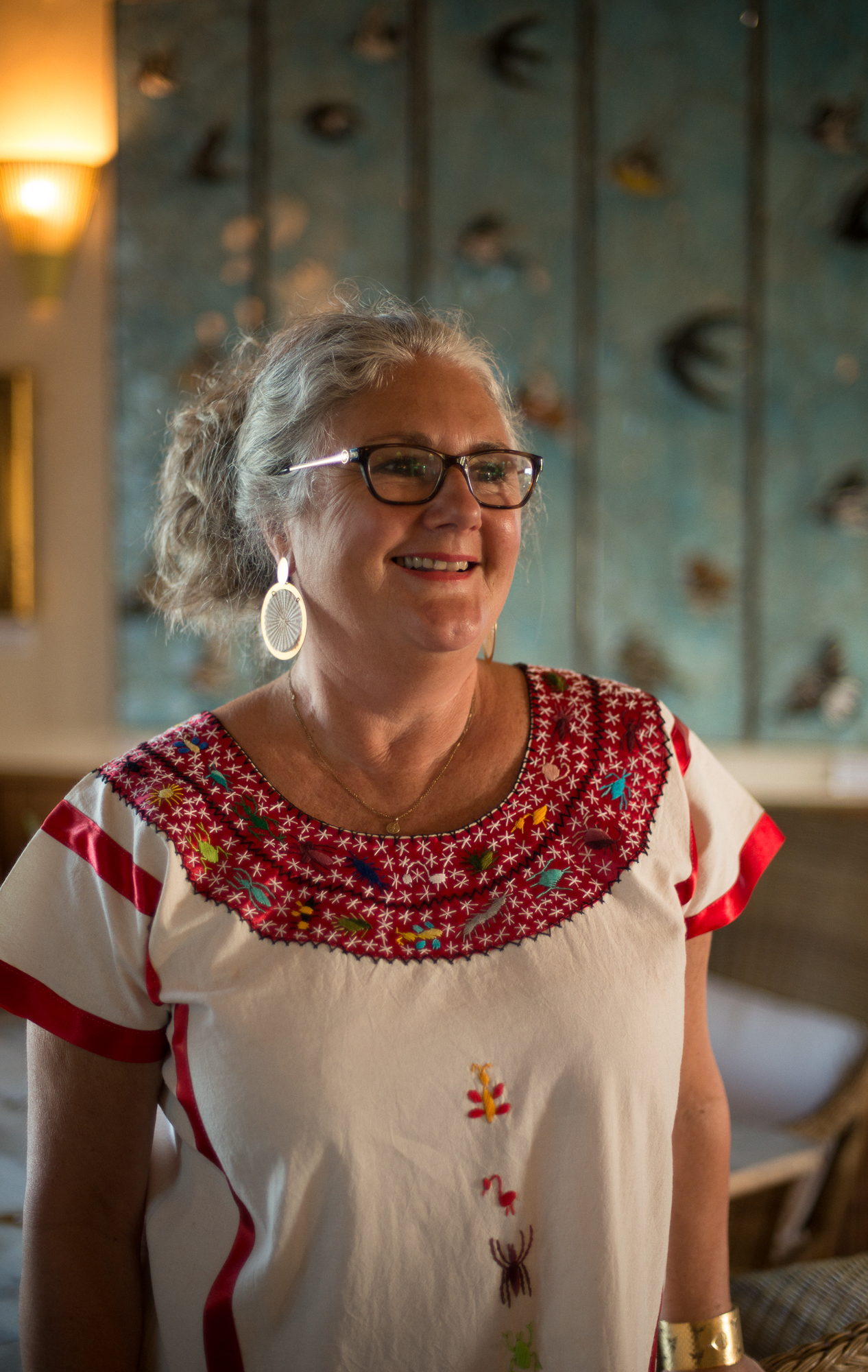