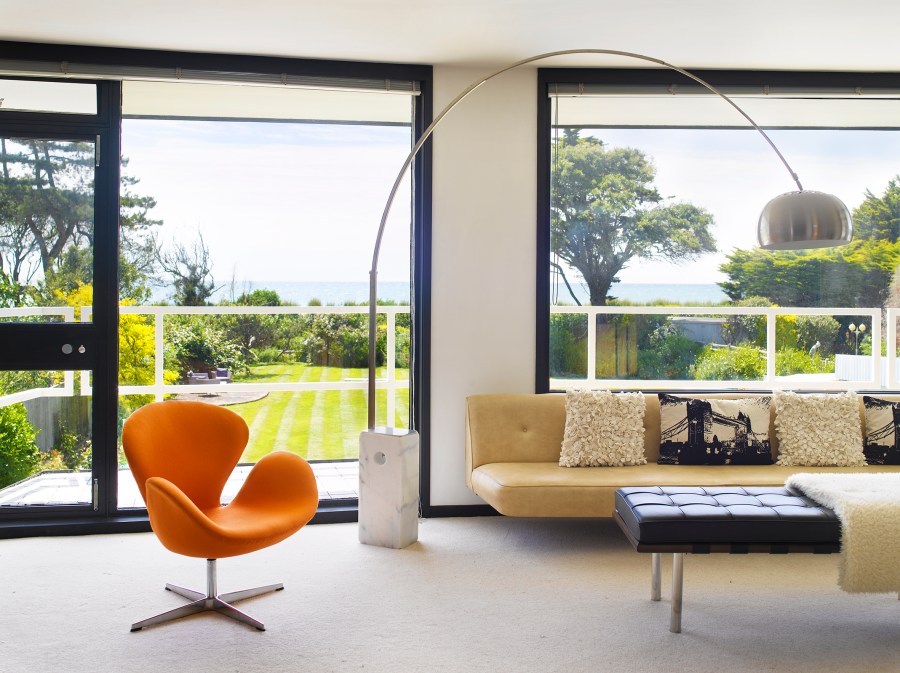 When Jonathan Howell and Clara Swinson – both fans of Midcentury design – were scouting round markets for 20th-century finds in their late 20s/early 30s, they never dreamed that a decade later they’d own one of the classic buildings of the period.

Built on the West Sussex coast near Littlehampton in 1970, Grade II-listed Vista Point was the work of Patrick Gwynne (best known for his 1938 masterpiece, The Homewood, now owned by the National Trust). The house bears many hallmarks of the Modernist era: from the curvilinear silhouette to the monochrome colour scheme, and the wraparound balcony overlooking the garden, where there’s a Hockney-esque swimming pool.

The property’s reverse-level layout maximises far-reaching views of the Channel from the first-floor living area, where, on a clear day, you can watch sailing boats drift by and spot distant container ships on the horizon. ‘It’s a fabulous house,’ says Clara. ‘And the location, with the beach at the back gate, is just great.’ 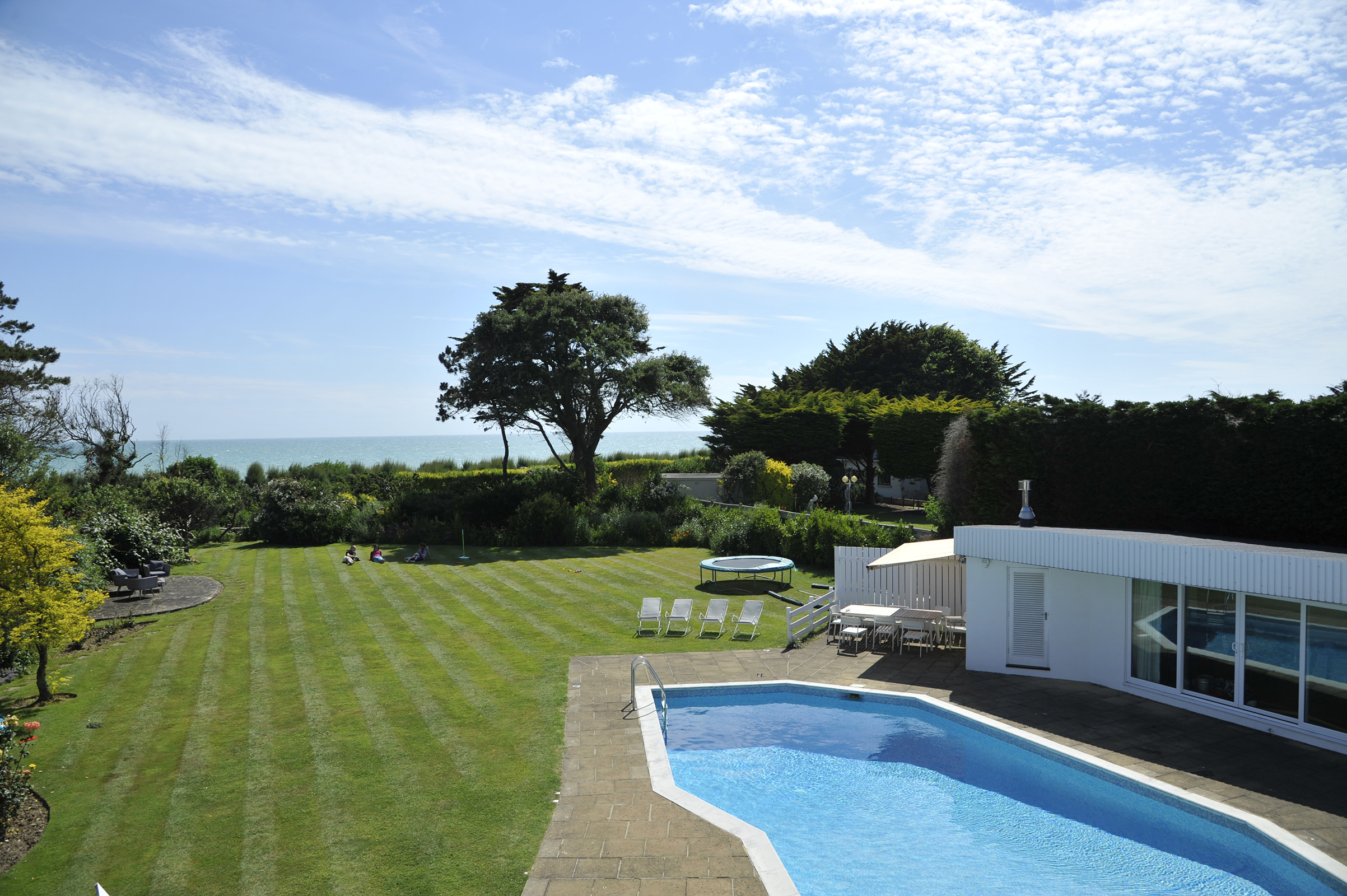 THE THRILL OF THE CHASE
The London couple weren’t seriously looking for a holiday home when Jon happened upon Vista Point’s details online, nearly ten years ago. ‘We’d talked about buying somewhere, after having children,’ says Jon (he and Clara are parents to Flora and Toby) ‘But we wouldn’t have done it yet, unless we’d seen this house.’ From the pictures, however, they knew they’d found something special and called the agent, only to discover it had already sold to a cash buyer. ‘Jon was so disappointed,’ recalls Clara. ‘And I said, “It will be at least another 10 years before it’s for sale”.’

But it was much sooner than that, as Jon came across the particulars again in summer 2013. This time, he and Clara knew they had to act quickly and made a whistle-stop tour of the house with both children in tow. ‘I remember opening all the cupboards and being amazed at the attention to detail,’ says Clara of the interior, which is also designed by Gwynne and Grade II-listed. Spookily, several pieces of furniture that they have in their home in London (an Arco lamp and Swan chairs by Jacobsen, for example) were part of the design scheme here, too. The property went to nerve-racking sealed bids – only to go off the market again – before Jon had a call from the agent a month later, saying Vista Point was theirs. To finance the purchase, they came up with the idea of running it as a holiday let, and secured a ‘buy-to-holiday-let’ mortgage.

A FUTURISTIC BUILD
Since picking up the keys in January 2014, the couple have developed an even deeper admiration for Gwynne’s skill as an architect. As Jon says: ‘It doesn’t just look nice, it’s useful, too.’ The house, built for Gwynne’s quantity surveyor friend Kenneth Monk, has an unusual ‘waisted’ floorplan, centred on the striking, ash-panelled spiral staircase. According to Gwynne’s notes: ‘The plan shape results largely from screening the house at either side and concentrating the outlook towards the garden and sea beyond.’ The layout also creates a clear division between the family and guest bedrooms on the ground floor (there are five in all), allowing each their own ‘wing’. 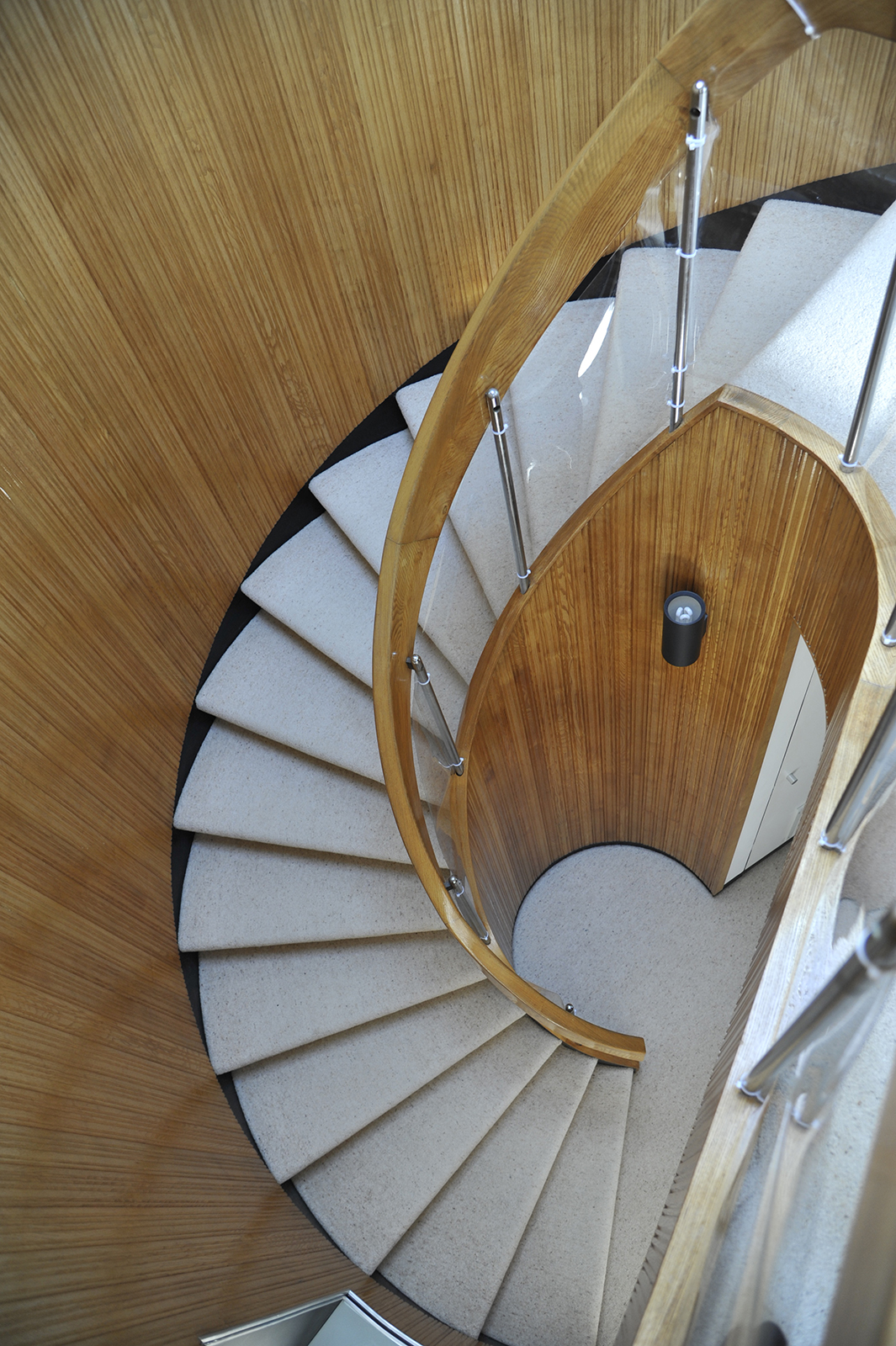 Unusually, for a house of its time, it has three bathrooms, all of which survive in their original state, down to the white suites and coloured tiles, in suitably late-1960s shades of navy, turquoise and yellow. ‘The architect designed everything, even the cupboard for the loo brush,’ says Jon. As heated towel rails were not readily available at the time, Gwynne had them specially made from chrome piping.

Most of the bedroom furnishings are custom-made, too, including the headboards, ‘floating’ bedside and dressing tables, wardrobes and mirrors. And in the upper-floor living spaces, the architect’s playful nature can be detected in details such as the ‘hidden’ drinks cabinet in the living area, built-in speakers and the hatches between the kitchen, living and dining rooms, facilitating the flow-through of refreshments when entertaining.

MAKING MEMORIES
The previous owners, who lived abroad, included much of the furniture in the sale, so all Jon and Clara had to do was add a few signature pieces, such as their original 1970s Eames rocker and a Bramante dining table, the latter chosen from designer homeware site made.com, where Jon is chief technology officer. Both he and Clara – a policy director at the Department of Health – work four days a week, so they’ve been able to use the house often for holidays and weekends.

‘That’s the great thing about being so close,’ says Jon. ‘We can be here at weekends when it’s free, plus a week or so in the summer and maybe at New Year.’ Another joy has been discovering the sand and pebble beach, which is accessible through the back-garden gate. ‘There’s a sailing club and a café that opens in summer, but even then there’s never more than 20 people around,’ says Clara. Here, Flora and Toby can paddle, build sandcastles and throw stones in the water. ‘What we hope is that it will bring to the children’s lives is the memories of having somewhere special they can go back to over time throughout childhood,’ says Jon, ‘and which is a complete contrast to London, with the space, the quiet, the sea and nature – and, later on, their friends can come and stay, too.’

The family have already enjoyed memorable celebrations at the house, such as Jon’s mother’s 70th on their first weekend here, and a garden party with friends in the summer. The pool house, which was a later addition to the house in 1977, comes into its own when Jon and Clara have outdoor gatherings, as it has a kitchenette for cooling drinks and preparing food, along with a changing room and shower for anyone taking a dip. ‘Part of the attraction of the house was that we could have people come and stay,’ says Jon.

The house is close to Brighton, Chichester and Arundel for day trips – and the East Beach Café at Littlehampton is a three-mile walk along the coast. But quite often, the house, garden and beach provide enough entertainment for the family. In the coming years, Jon and Clara hope to work on the garden, maybe add an outdoor office and – longer term – possibly retire here. But they’re not in a rush to change anything. ‘We intend to have this house for a very long time, so there’s no hurry,’ Jon says. ‘In our minds, it’s a forever house, because it’s such a one-off.’

Vista Point is available as a holiday let through vista-point.co.uk.

For more seaside home stories, click here or pick up a copy of the magazine.

PATRICK GWYNNE: A VISIONARY
Why the Vista Point architect was ahead of his time

British architect Patrick Gwynne (1913-2003) was heavily influenced by the Modern Movement and his signature building, The Homewood, in Esher, Surrey, references the work of Mies van der Rohe and Le Corbusier. This experimental house – where Gwynne lived and worked for most of his life – has a dramatic, 45ft living space on the first floor, doing away with the discrete dining rooms and parlours that were customary at the time. As with Vista Point, it also features his own built-in furniture, light fittings and a spiral staircase. Gwynne often collaborated with caterer/hotelier Sir Charles Forte, and one of the two restaurants he built on the Serpentine in London’s Hyde Park still survives. Most of Gwynne’s commissions were for private houses, though he also remodelled the foyer and restaurant area of the Theatre Royal in York in a distinctive, mushroom-shaped design. ‘His legacy is his far-sighted vision for contemporary living and his attention to detail,’ says David Scott, tenant of The Homewood, which allows guided tours by appointment (Gwynne bequeathed his home to the National Trust). He adds: ‘It gives a real insight into the man, the way he did things and the way he lived.’ (01324 476424, nationaltrust.org.uk/homewood)